Editor’s note: The GoPro Hero 5 Black has now been discontinued following GoPro’s announcement of the new Hero 7 range. GoPro did tell us there might “still be some retail inventory of previous cameras”, so it’s possible you’ll be still able to find the GoPro Hero 5 Black on offer. If you want a newer equivalent, then GoPro’s new Hero 7 Silver is the closest model you can get. We’ll bring you a full review of that very soon.

Going on holiday is always the perfect time to test out an action camera such as the GoPro Hero 5 Black. So when I booked in two weeks in Vietnam, I figured it would be opportune to break out what was then GoPro’s “best camera to date” for another spin.

During those two weeks, I used the GoPro Hero 5 Black in a number of different scenarios and with a range of mounts. It followed me into the sea and hotel pool. I strapped it to my chest and stuck it to my helmet while riding a moped through cities and rough terrain, and I shot handheld while under duress from some rather aggressive monkeys.

Thankfully, my experience of using the Hero 5 Black constantly for two weeks didn’t change my opinion much from my original review. While it’s since been overtaken by the GoPro Hero 6 Black in many respects (most notably in image stabilisation and image quality), it’s still well worth a look if you can’t stretch to the flagship’s £399 price tag. 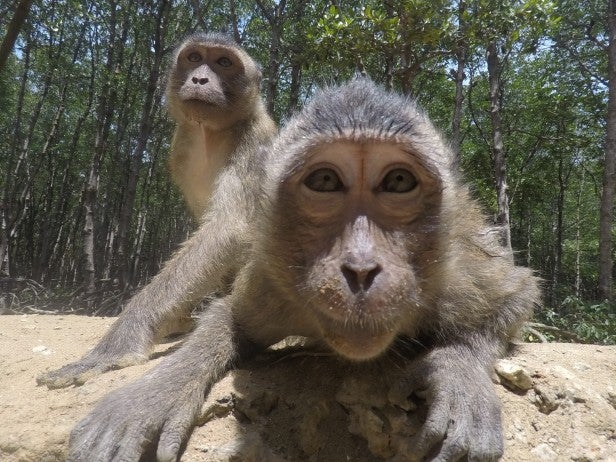 Not needing to worry about dropping the Hero 5 Black into an accompanying waterproof case is a time-saver you don’t really appreciate until you’re constantly moving around or taking impromptu dips in the middle of a hot and sweaty Vietnam day. It’s a far more seamless experience compared to when I took the Yi 4K Action Camera to Bali last year, for example.

The dual microphones were also great when sat on a speedboat or when cruising through Ho Chi Minh City on a moped. Wind noise is far more controlled compared to certain other rival action cameras. When capturing the sound of your environment is just as important as the visuals, it makes a big difference.

A speedboat trip through Can Gio, Vietnam – unedited straight from camera

It’s not all perfect, though. My issues with the touchscreen responsiveness still remain, even though there have been firmware updates since my original review – some of which were supposedly designed to address the issue. Sometimes taps at the screen aren’t registered, but more often my problem was with swiping into the screen from the edges. This is something GoPro seems to have now improved in the Hero 6 Black.

I also had very occasional SD card error messages, which meant that recordings were abruptly stopped – not ideal. I’m not sure what was causing it, either. Powering off the camera and turning it back on again would fix the issue. Fortunately, this only happened twice.

Still, aside from a few niggles, the GoPro Hero 5 Black is just really easy to use, especially when you’re travelling. The USB-C charging was also really handy, as I just carried around a portable power bank to take care of charging my smartphone and the two Hero 5 Blacks I was carrying. 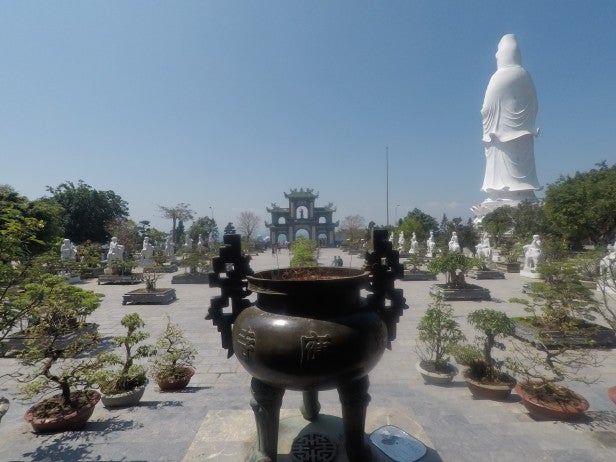 GoPro’s suite of portable apps is great, too. In the bit of downtime I had, I spent it transferring images and video to my phone and then knocking together an edit on Quik to share on social media. It made keeping people at home updated really easy (also known as #holidayspam). Updates including the new QuikStories are also great, and it’s pleasing to see GoPro’s continued support with improvements and fixes.

As another aside, if talk of GoPro’s market misfortunes is true, that news hadn’t reached the considerable number of travellers I came across all sporting GoPro’s latest and greatest. Of course that’s just anecdotal evidence, but it was interesting to see.

With the subsequent release of the excellent GoPro Hero 6 Black, the Hero 5 Black has now seen a price reduction to £299, making it a great choice if you don’t want to stretch to the latest flagship. It’s still a fantastic action camera.

My original review of the GoPro Hero 5 Black continues below.

What is the GoPro Hero 5 Black?

The Hero 5 Black is the GoPro camera option for those who want the best action cam available right out of the box. You can almost think of the Hero 5 Black as GoPro’s ‘Greatest Hits’ compilation. It takes the best features from previous-generation GoPro cameras and combines them together in a single unit – and adds a smattering of new functions too.

What’s the recipe for the best GoPro camera? Take the same 4K resolution, 30fps video of the Hero 4 Black, throw in the touchscreen display that was a feature of the Hero 4 Silver (and only an optional extra for the more expensive Black), and mix in the built-in waterproof capabilities and improved audio performance of the original Hero Session.

Top this lot off with electronic image stabilisation (finally!), useful voice controls and GPS, and you have one superb action camera – and the best one GoPro has ever released.

Putting aside the outlier Hero Session, the Hero 5 Black sees the first drastic re-design to GoPro’s main range of cameras, which is both good and bad; mainly good, however.

It retains its familiar rectangular shape, but the Hero 5 Black is now coated in a grippy, rubberised material. It’s far more rounded at the corners, too.

The dimensions of the camera have changed, which could mean it might not play well with a select few older accessories and mounts. The handheld gimbal I used with the Hero 4 Black, for example, can no longer hold the Hero 5 Black since the frame obscures the camera’s lens slightly.

This is because the Hero 5 Black is a few millimetres bigger in all dimensions than the Hero 4 Black when outside of its waterproof case. Most noticeable is its depth, especially when you take into account its protruding lens. 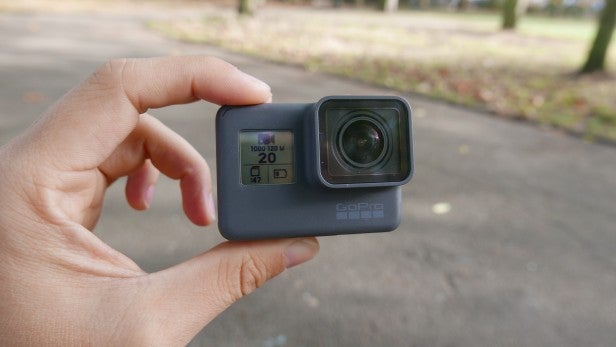 The reason is understandable, though: there’s now a 2in touchscreen display on the rear. The Touch BacPac was an optional accessory for the Hero 4 Black and added to its size.

In addition, the Hero 4 Black was waterproof only in the dedicated case, whereas the new camera is waterproof without the need for any additional housing. It’s safe to take the Hero 5 Black to depths of 10m without a worry. If you want to go deeper, then there is a waterproof housing available as an optional extra.

To keep the internals of the camera free of water, GoPro has more greatly reinforced the battery, microSD and connection port covers compared to previous models to keep them sealed. A little effort is required to access the micro-HDMI and new USB Type-C charging port in particular, since you need to depress a fiddly release button on the side to open the catch before sliding it open. 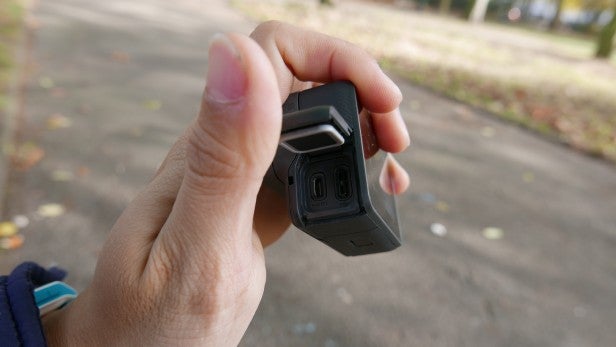 And yes, you read that right. Having waited this long for GoPro to finally embrace micro-USB ports in place of mini-USB, the company has now moved onto USB Type-C instead. Don’t get me wrong, this is a good move – especially if you have a newer smartphone featuring USB Type-C – but it just tickles me that it happened so rapidly after an initial long wait.

Removing the need for the waterproof case in most shooting scenarios is a big deal. Not only is it more convenient, and makes for a  smaller camera, but the audio-capture performance is much improved now that the microphones aren’t encased.

Like the Hero Session, the Hero 5 Black features dual microphones, front and back, which the camera can swap between for the best performance – especially in windy situations. If you’re on a bike, for example, the camera can intelligently swap to the rear microphone for less wind noise.

As a bonus, the Hero 5 Black weighs about 30g less than the Hero 4 Black in its case, which will make it slightly less noticeable if you have it attached to a helmet or on your body.

Instead of having to use the waterproof case from older cameras for mounting, the Hero 5 Black now comes with a plastic frame that wraps around the edge, with the standard GoPro mount on its base. 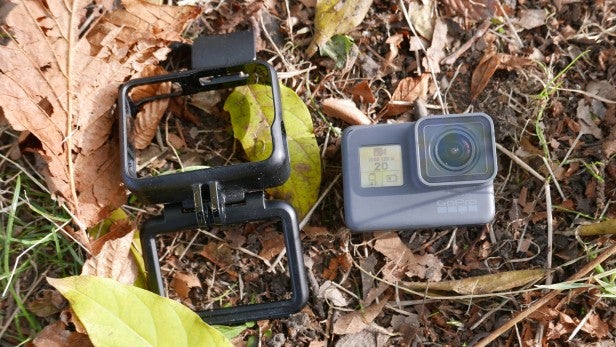 Since there’s an exposed cut-out on the side of the frame, you can actually remove the USB port cover – just remember to reattach it if you intend to use the camera in water. This means you don’t have to remove the camera from the frame to charge it, or if you need to power the camera for a long period – for a lengthy time-lapse video, for instance – while keeping it mounted.

A standard adhesive mount is included in the box, but the Hero 5 will work with practically all standard GoPro mounts that aren’t based on the specific size of the Hero 4 Black – as was the case with my aforementioned gimbal.

Overall, I love the new design of the Hero 5 Black. The rubberised exterior makes it great to hold and it helps the camera when it comes to shock-proofing, too. Where I never really felt comfortable using the Hero 4 Black without its protective case even when out of water, the Hero 5 Black feels solidly constructed.

Having now used the Hero 5 Black for a few months, its build quality has largely stood up to the bumps and knocks in use. The front display of my review camera has picked up a scratch and there are a few marks on the edge of the lens’ housing, otherwise, all things considered, it’s done pretty well.

Not needing a waterproof case for all but the deepest depths is also a real benefit.

Next
Controls and Screen Review