What is the Sony Xperia XZ1?

The Sony Xperia XZ1 is a high-end phone, but not in the same vein as the iPhone X or Samsung Galaxy Note 8. Although it has top specs, it actually seems a little ordinary next to some of the best from Samsung, LG and even Honor.

There isn’t much wrong with the Sony Xperia XZ1 beyond a few niggles. However, when phones such as the Honor 9 and OnePlus 5 offer similar quality for £200 less, it’s hard to get excited about this handset – particularly when its newest feature is the fun but largely useless 3D face scanning. 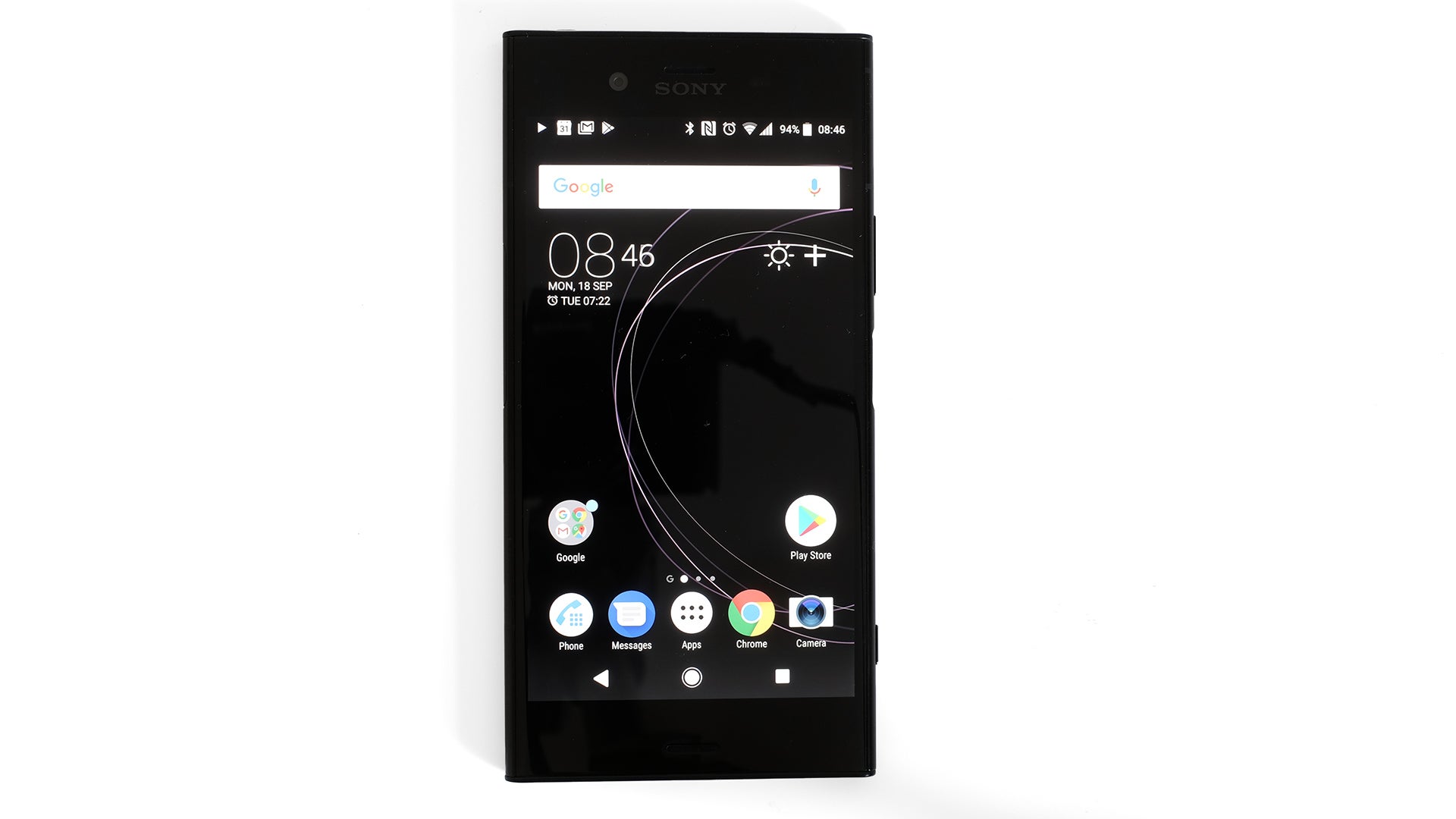 The Sony Xperia XZ1 looks and feels pretty similar to the Xperia XZ. At arm’s length it would be impossible to tell the difference.

However, this is actually a higher-end phone, featuring elements of the even pricier Xperia XZ Premium. The Xperia XZ1’s back and sides are all-metal. The aluminium rear curves around to form the sides, with no seams or splits to be seen. While this might not appear something to boast about in a £600 phone, it’s a step up for the series.

The top and bottom ends of the handset are plastic. It took me a while to work out that they weren’t metal, because the material doesn’t feel like bog-standard plastic; it appears to be more like the glass-fibre reinforced plastic as seen on the Xperia XZ1 Compact.

While the XZ1 doesn’t quite have the wow factor of the shiny Honor 9 or curvy Samsung Galaxy S8, this is definitely a smart-looking phone. My issue with the design is that, like every other Xperia, it feels rather large for its screen size. Its overall dimensions are pretty similar to those of the OnePlus 5, which has a 5.5-inch screen. The Xperia XZ1 has a 5.2-inch display. It’s thinner than the Xperia XZ at 7.4mm thick, but it remains wide.

Parts to celebrate include Gorilla Glass 5 on top of the screen and IP58 water-resistance, which means it should survive an accidental dunk in the water. You also get 64GB storage and the option of a microSD card – there’s a slot under the pull-out flap on the Xperia XZ1’s side. 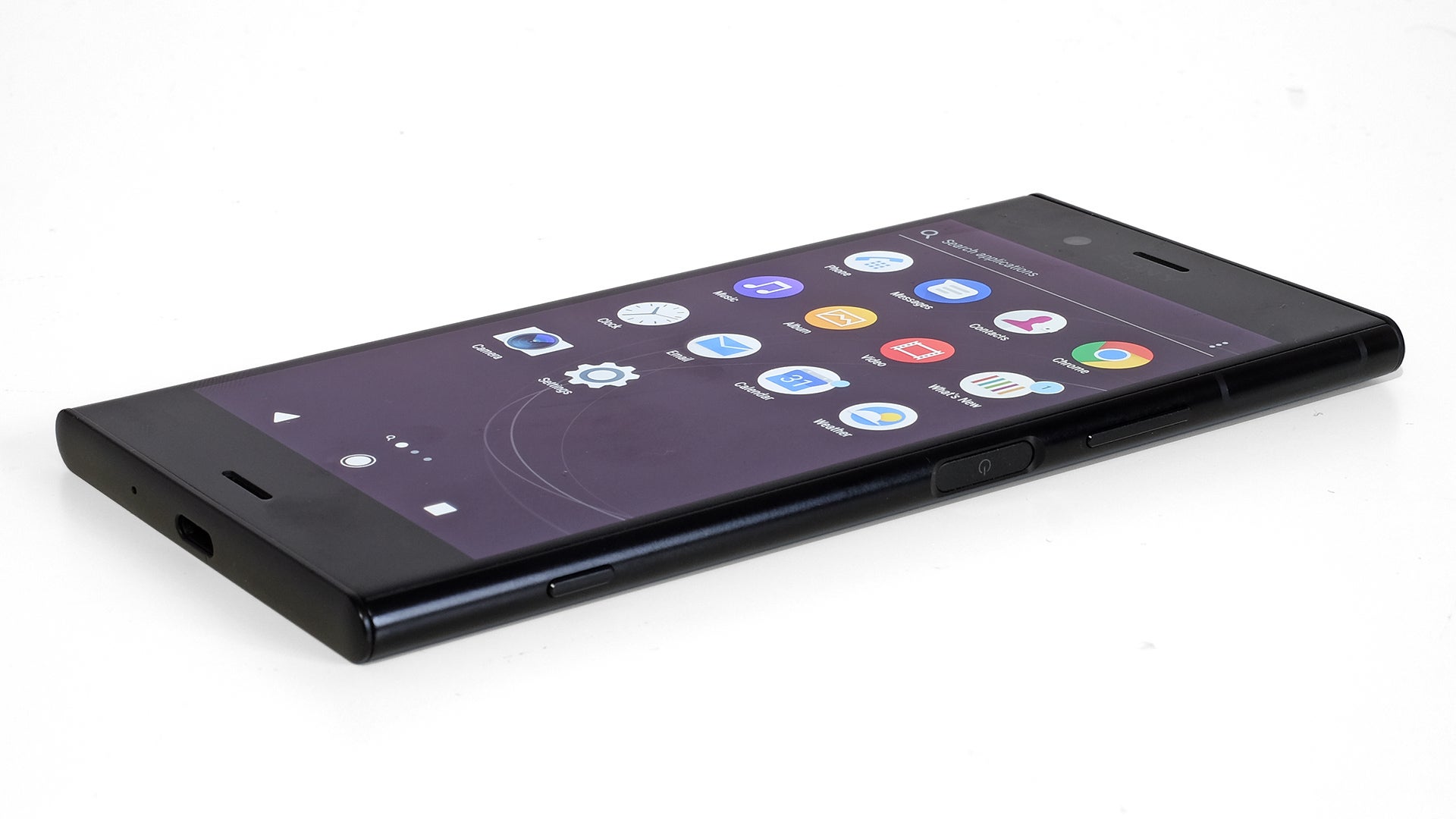 As already mentioned, the Sony Xperia XZ1 has a 5.2-inch 1080p IPS LCD screen. It isn’t as sharp as the Samsung Galaxy S8, but the only image quality quibble I have is that close-up, there’s appear to be some ultra-fine ‘diagonal line’ patterns visible on blocks of white. This isn’t down to a lack of pixels, but another layer in the display. Perhaps the touch panel.

You also don’t quite get the perfect contrast of an OLED display. However, you’ll only notice if you’re using the XZ1 with the brightness ramped up in a dimly-lit room. Sony’s top LCDs do actually get pretty close to the perceptual benefits of OLED.

This is particularly true of colour saturation. If you like, it’s possible to make the Sony Xperia XZ1 look extremely saturated, with both turbo-charged colour and increased contrast.

The Sony Xperia XZ1 has three display modes: Super-vivid is too rich for my tastes; but both Standard and Professional look great. Professional is a strict sRGB mode. It will look a little undersaturated to most eyes, but is the best one to use to ensure photos look the same on the screen as they do on your laptop. Max brightness, too, is powerful. Outdoors visibility is fairly good. 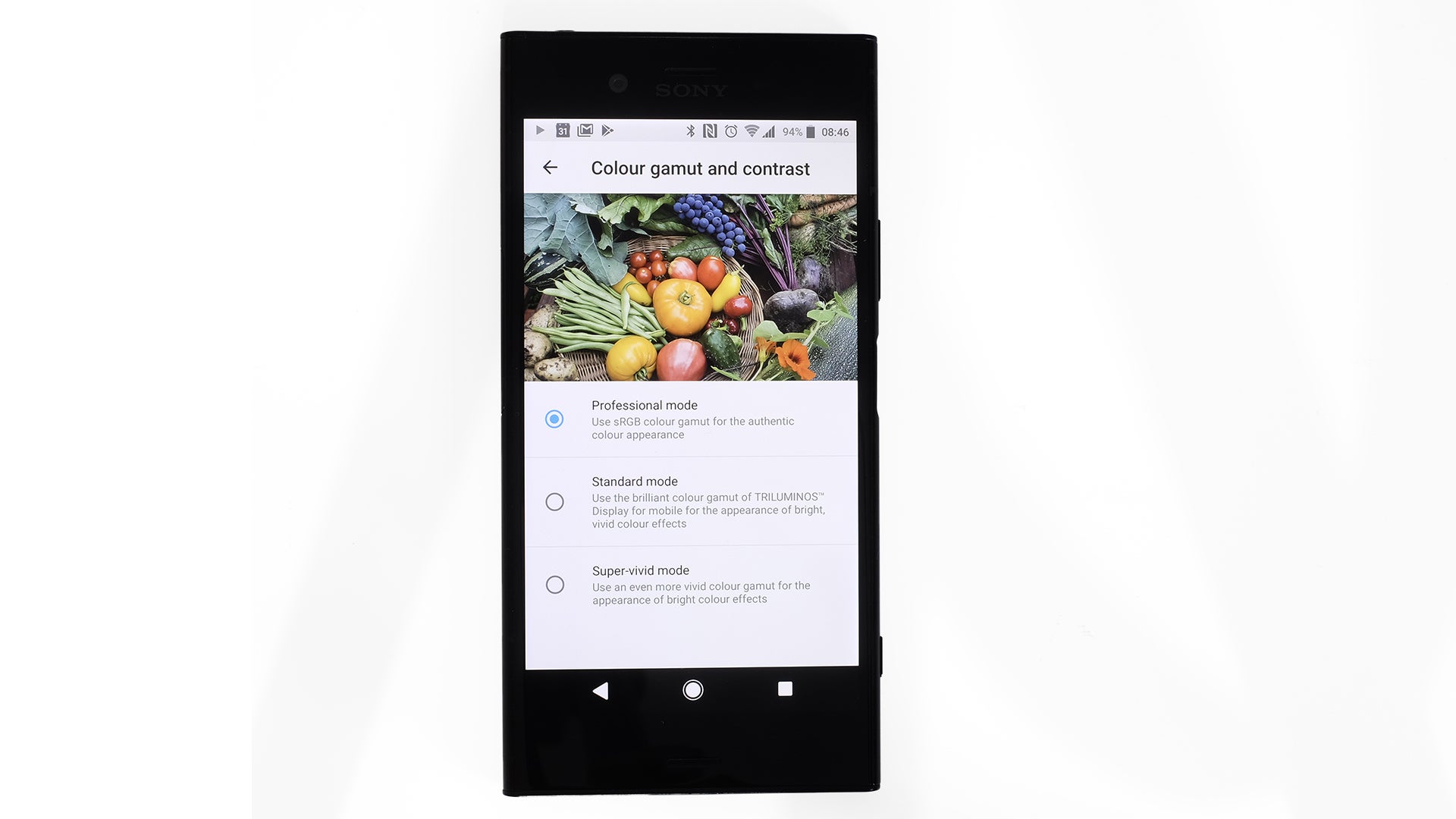 The Auto Backlight mode is jittery, however. It flickers up and down rather than doing so smoothly. I’ve found it a little distracting when reading an article on the train. Go through a tunnel and the Xperia XZ1 looks like it’s having a breakdown. Let’s hope Sony fixes this with an update.

Like the Sony Xperia XZ Premium, the XZ1 also supports HDR content. This is video designed to make use of displays with very high contrast and a wide colour gamut. Using Netflix or Amazon Prime Video, you’ll see punchier colour in HDR video.

However, in ‘pitch black’ cinema conditions I’d still prefer to watch a non-HDR OLED than an HDR LCD. The unlikeliness of this is the reason I don’t put great stock in technology such as phone HDR as a top reason to buy.

When I watch a video on a phone for longer than a few minutes, it’s always in an image quality-compromised environment. Stuck on a train for four hours, I’d much rather watch a film on a good 6-inch screen than a great 5.2-inch one.

The Sony Xperia XZ1 is one of the first phones to launch with Android 8.0. There’s still a Sony interface layered on top, but there are a couple of new features that stand out.

First, there are notification dots. These are little coloured circles that pop-up over app icons when, for example, you receive an email. It makes your homescreen more of a ‘desktop’, providing a quick way to see what’s going on without pulling down the notifications dropdown. 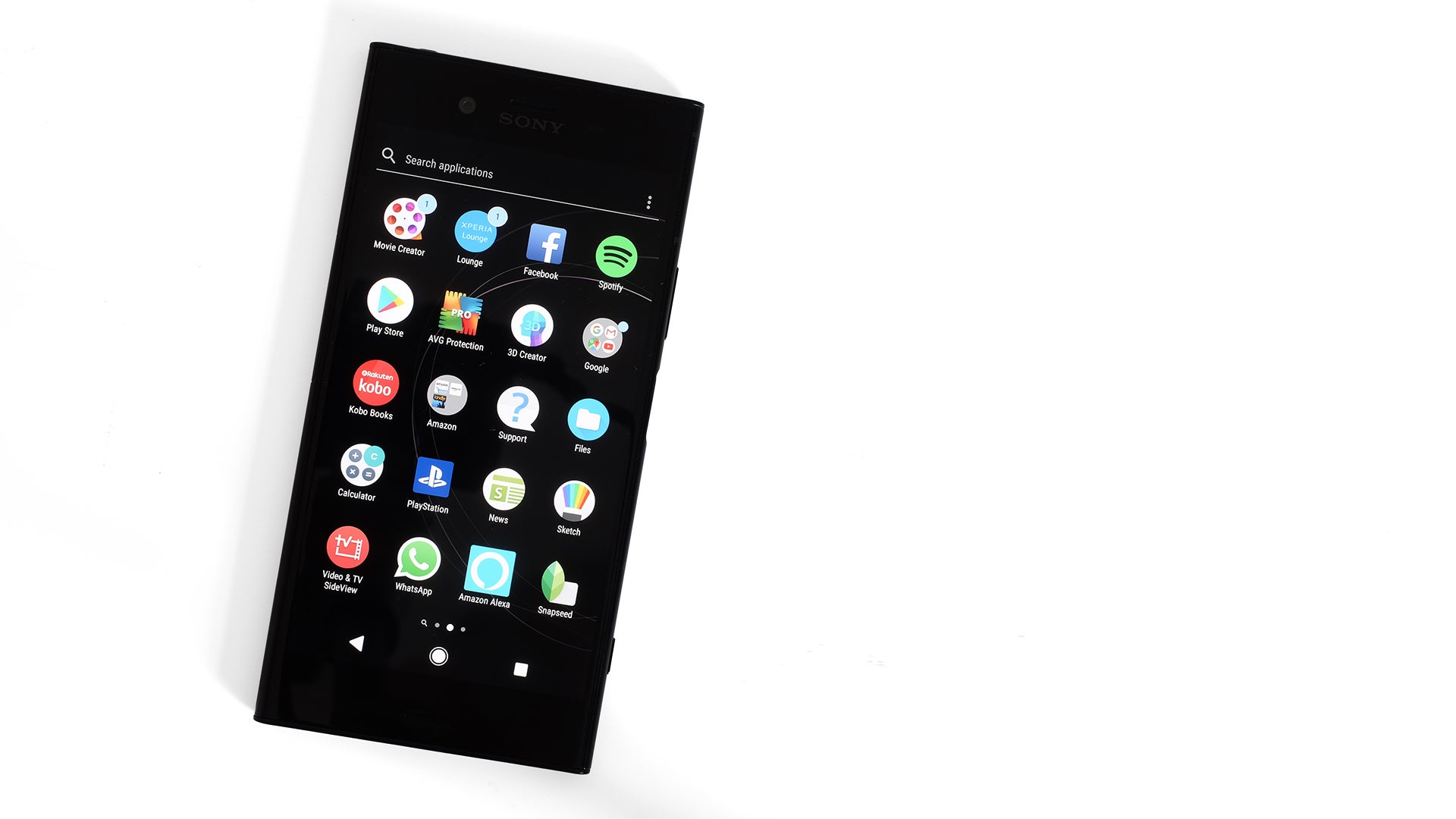 The notifications bar also feels different here. Once there are more than a few notifications, you’ll see small icons at the bottom, indicating that there are others that don’t quite fit on the screen. These pop up properly as you flick up. Android 8.0’s notifications have more fun feel than before.

New Android features aside, the Sony Xperia XZ1’s software looks much like that of other recent Xperia phones. The apps menu is arranged as horizontally scrolling pages rather than a vertical feed, and Sony’s apps sit alongside the Google suite. There are apps for music, watching video and to hook up with PlayStation network. Sony has also preinstalled ebook store Kobo and the AVG virus scanner. You can’t delete them, but you can ‘disable’ them.

The Sony Xperia XZ1 also has a ‘recommendations’ section, accessed by swiping left-to-right from the apps menu. This is really just a list of app links to Google Play. Unless you’re a brand-new phone user, it’s unlikely to be of much use.

This part can be switched off, however.