At launch the Samsung Galaxy S5 is among the most powerful phones ever made. It uses the Snapdragon 801 processor, which is the upgraded version of the Snapdragon 800 chipset we saw in top-end phones of late 2013 like the LG G2.

The Galaxy S5’s particular iteration is a 2.5GHz quad-core model, clocked 200MHz faster than the Snapdragon 801 version we’ll see in the UK versions of the Sony Xperia Z2 and HTC One M8. As king of the Android castle, it’s no great surprise that Samsung has done its best to keep onto its title with this bit of tech Top Trump-ery.

In practice this won’t make a great deal of difference, though, and the Sony Xperia Z2 has another hardware advantage anyway. The Z2 has 3GB of RAM, the Galaxy S5 2GB. After Samsung plugged 3GB into the Galaxy Note 3, this was a little surprising. But we imagine it was a result of fairly intensive research into the real-world benefits versus the additional hardware cost. Well, hopefully. 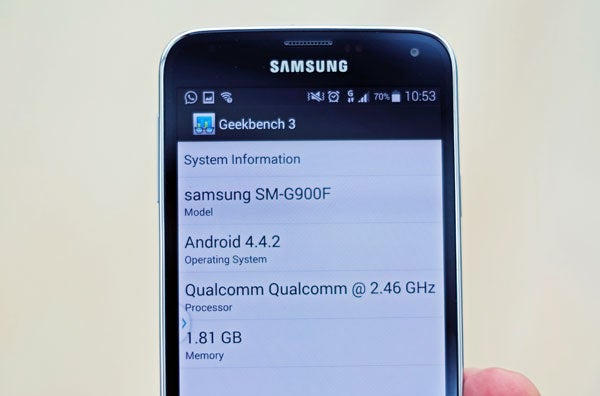 After seeing relatively good day-to-day performance – for a TouchWiz phone – we gave the Galaxy S5 some more objective tests. In this time of benchmark duping by just about every phone-maker out there, exact benchmark results should be viewed with slight scpeticism. But they can tell us whether a phone is performing as it should.

In 3DMark with the Unlimited Ice Storm test, the Galaxy S5 scores 18,600. That’s a little below the HTC One M8’s score, but with HTC already having admitted to fiddling benchmarks with the phone, we’re loath to come to any damning conclusions with this data.

In Geekbench 3, the phone scores 2,908 points. This is slightly higher than the HTC One M8’s score (2,840). This makes sense as it is a largely CPU-based benchmark, and the Galaxy S5 is after all 200MHz faster than the UK version of the M8.

If we were to do down the Galaxy S5’s abilities, it would only be because a more impressive CPU upgrade is already around the corner. Snapdragon 801 is a stop-gap upgrade between Snapdragon 800 and Snapdragon 805, due later in 2014. 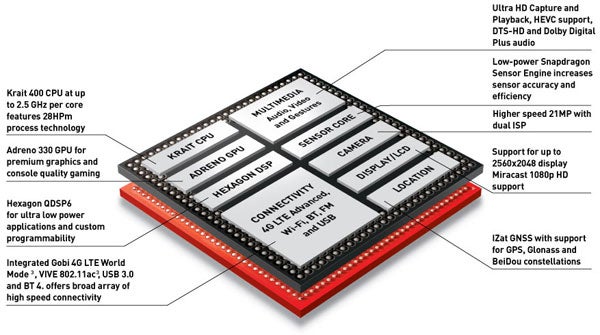 The Snapdragon 801 is merely a supercharged 800. It has the same battery efficiency techniques and the same core components, but they are clocked a bit higher. As such, the 2014 flagships aren’t really much more powerful than the LG G2, which currently sells for a good £150-250 less. But then hardly any normal people know that phone exists, it seems, though it’s relative the Nexus 5 is wildely popular.

For a few more real-world tests, we tried the Galaxy S5 out with some top-end games. Real Racing 3 shows the same minor frame rate drops we saw with the HTC One M8, seemingly confirming it’s down to lacking optimisation on EA’s part. Using a ‘top-end’ phone also makes us naturally keen-eyed for these sorts of things – the game still runs extremely well.

A few other games we tried include Riptide 2 and Dead Trigger 2. The latter is a particularly good way to show off powerful phone hardware, with graphical elements like proper real-time shadows, complex water effects and reflections and real-time lighting effects. The Galaxy S5 handles it with relative ease.

It’s the screen – as much as the powerful processor – that makes the Galaxy S5 such a great gaming phone, though. The deep blacks, rich colours and large expanse of screen space make the phone hard to beat.