What is the Samsung Galaxy Note 3?

The Galaxy Note 3 is a slightly large-screened Android phone equipped with a Wacom digitiser stylus. The bigger brother to the Galaxy S5 it’s also arguably a lot more interesting, although at £600 SIM-free the additional benefits come at a price. There are quite a few aspects of the phone we’re not totally enamoured with, particulry regarding some of Samsung’s design decisions, but this is a great phone for gadget lovers and geeks alike.

We’ve created a video review of all the Galaxy Note 3’s most important features, give it a watch below.

There’s no hiding it, the Samsung Galaxy Note 3 is a very large phone. Saying that, it’s still not quite in the same league as huge mobiles like the Galaxy Mega 6.3 and Xperia Z Ultra. You won’t feel entirely ridiculous putting it to your ear, and holding it in one hand is not too much of a struggle. Samsung has actually managed to make the Galaxy Note 3 narrower than the Galaxy Note 2, even though the new phone has a larger 5.7-inch display. 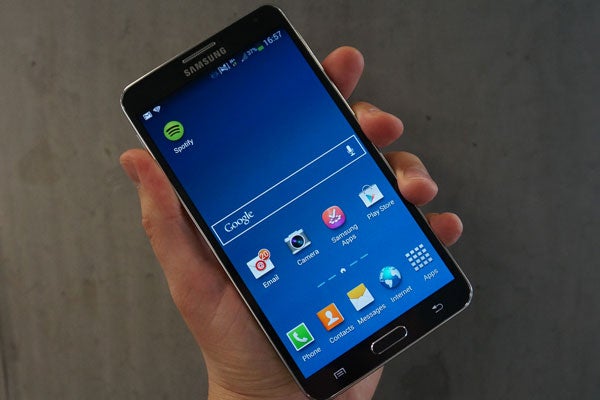 While this is an impressive feat by Samsung we should not forget that the phone is still 8cm wide. If you crave a phone that you can easily use one-handed, then this is not it. For a bit of context, the iPhone 5S is just 5.8cm wide.

The Note 3 is also among the first Galaxy phones not to use a glossy rear plastic cover. Samsung has tried to fool us into thinking the Note 3 has a leather rear. It looks like leather, from a distance, and the battery cover has fake stitching around its outer edges. But make no mistake – this is not leather. 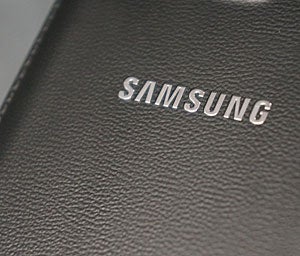 So what is it? It’s rubberised plastic with a leather-effect grain to give it a frictional quality of the real thing.

Take the battery cover off and you’ll see quite how similar it actually is to the back of the Galaxy S4 and Note 2. It’s thin, bendy and plastic. And while it doesn’t feel bad as such, we prefer the aluminium of the HTC One M8 and the matt plastic of the Nokia Lumia 925.

This is not a deal-breaker, but don’t approach the Galaxy Note 3 thinking Samsung has revolutionised its approach to hardware design – it hasn’t.

If anything, the new style is more likely to polarise opinion than the safer old phones.

As well as a leather-effect rear, the sides of the phone are ribbed chrome effect plastic, clearly intended to make it look like metal. The overall effect means it ends up looking a bit naff. Moreover, the white version has a less convincing feeling than the black. 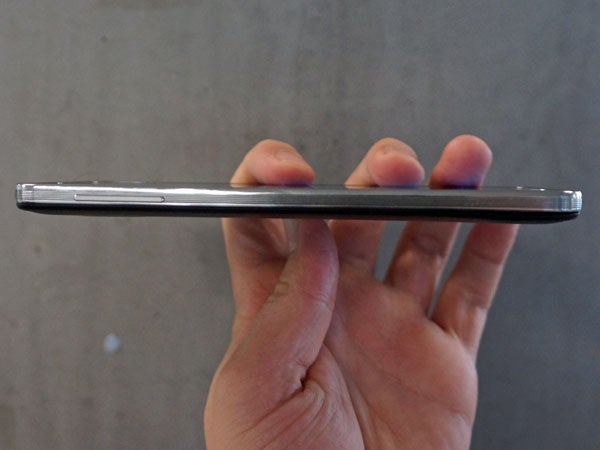 This ribbed plastic is also seen on the S Pen, which slots into the bottom edge of the phone. There is at least some consistency, even if the surface-level generational upgrades feel like changes for change’s sake.

One such change – but also something that tech geeks will lap up – is the new connector socket on the bottom. It looks like a microUSB with a partially developed conjoined twin attached. It’s not graceful, but it does come with benefits.

The Galaxy Note 3 has the first USB 3.0-compliant socket we’ve seen on a phone. This hugely increases the rate at which the phone can leech data from a computer (when using a USB 3.0 port), and will increase the rate of recharging when doing so over USB (again when using a 3.0 port). With just 32GB of internal memory in a Note 3, we’re not hugely excited about faster file transfers. But faster charging from a work laptop sounds good to us. 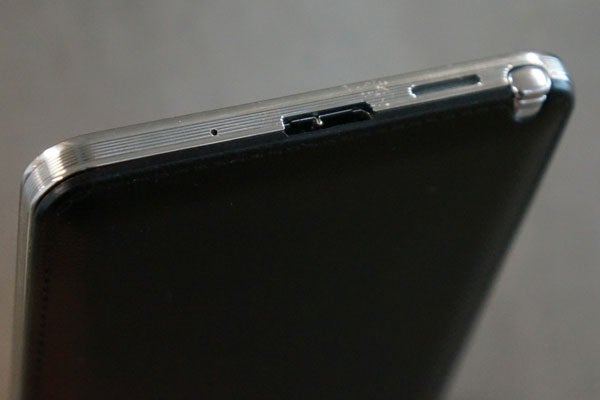 You don’t have to use the supplied extra-large cable, either. The Galaxy Note 3 is happy to charge, and transfer data, using a standard microUSB cable. Like previous Galaxy-series phones, the port is also MHL-compliant, meaning you’ll be able to output video and audio to a TV with the right cable. You don’t get one in the box, though.

Like every other Note phone, the Note 3 offers expandable memory through a microSD memory card slot. The UK version of the phone has 32GB of memory, and while Samsung does make a 64GB edition, it’s unlikely to get particularly wide distribution here.

The Note series has seen a gradual increase in screen size across its three generations. The first had a 5.3-inch screen, the Note 2 has a 5.5-inch screen and the Galaxy Note 3 has a 5.7-inch screen. These small increments have been made without any negative effects on the bodywork. The Note is less wide and less heavy than either of the former Notes.

The Note 3’s core screen technology is similar, though. It uses a Super AMOLED display of 1080p resolution. 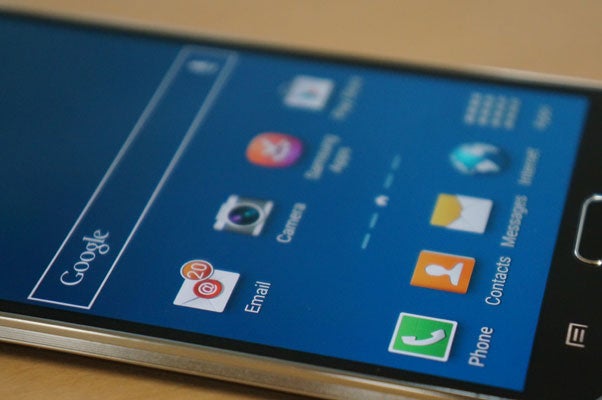 Like Galaxy S4, the Galaxy Note 3 uses a PenTile ‘diamond’ display, where the sub-pixels are arranged into a diamond shape. In a lower-resolution screen, using a PenTile display would result in fuzzy text, but here the 396ppi pixel density is high enough to make it a non-issue. This is a super-sharp screen despite being oversized.

And as comes with any good OLED-type screen, contrast and black levels are excellent in the Galaxy Note 3. Colours are a little more problematic. Fresh out of the box, they are a little hot, but Samsung gives you some control over the character of the display.

In the Settings menu you can pick between Dynamic, Standard, Professional Photo and Movie screen modes. Dynamic is as ugly as a TV in a Curry’s high street store (i.e. oversaturated), but the Photo and Movie modes get pretty close to giving an impression of accuracy.

As we saw with the Galaxy S4, top brightness is excellent for an AMOLED panel, although whites aren’t quite as searing as you’d see on a top-end IPS screen. This is a great display.

The most interesting part of the Galaxy Note 3’s screen, though, is the digitiser layer. You can’t see, it, but it’s what lets the S Pen stylus work. Wacom makes the digitiser in the Note 3 – it’s the company behind the ‘industry standard’ Intuos graphics tablets, used by professionals across the world. We’ll get onto what it’s capable of later.