In a nutshell: The Snapdragon 805 has started to appear in a number of phones. The Samsung Galaxy Note 4 packs Qualcomm’s flagship processor as does Google’s recently announced Nexus 6. Interestingly the 805 is still a 32-bit chip which means it won’t be able to take full advantage of 64-bit ready Android 5.0 Lollipop.

Here are the basics of this article: The Snapdragon 800 and 801 are essentially the same processor. The 801 is slightly faster in both CPU and GPU and has a better Image Signal Processor (ISP), which helps phone cameras perform better.

The Snapdragon 805 is more of a step up. It is faster than the 801 and has been designed with 4K at the forefront so will be able to support 4K resolution displays on-device, as well as 55-megapixel cameras.

But Qualcomm’s new way of naming its processors is a little confusing. This year we’ll see 800, 801 and 805-powered phones. “We’ve decided to increment each of the new processors numerically within those tiers… The 800 and 801 are essentially the same (Krait 400) processors with speed bumps across the board” explains Mark Shedd, Director of Marketing at Qualcomm, to TrustedReviews.

Does this mean there is not much to talk about? Quite the contrary, there are several reasons why these processors are interesting, especially the Snapdragon 805.

The first is that the Snapdragon 801 is used by all of this year’s most important phones. That means the HTC One M8, The Samsung Galaxy S5 and the Sony Xperia Z2. They all use the same Snapdraon 801 processor. Well, virtually the same processor. Just to add another factor into the mix-up, Samsung announced the S5 will come with a 2.5GHz processor while the Xperia Z2 was announced at 2.3GHz.

Looking at the specs like-for-like, the 801 isn’t too different from the 800. They both use Krait 400 CPU cores and Adreno 330 GPUs, LTE Cat 4 and the same WLAN chips. There are two versions of the 801 that will be shipped in the next gen of flagships. The 8974-AC is clocked slightly higher than the 8974-AB, hence the disparity in the figures quoted by Samsung and Sony.

See the graph below for a comparison:

More power is good, but that doesn’t necessarily mean the Galaxy S5 will feel any quicker than the Sony Z2 or HTC M8. Certain benchmarks will show the S5 to be the faster phone, however real world use may show that difference is indistinguishable. Indeed other factors, such as Android interface layers, may make more of an impact than clock speeds. We will update our findings when we have had all three phones in to review.

A faster, as-efficient processor is always preferable but these increases are relatively small. Of more interest is the big bump in the Adreno 330 GPU clock speed. It goes from 450MHz to 578MHz – an increase of almost 30 per cent – in the leap from Snapdragon 800 to 801. And the DDR RAM bandwidth increases by almost 17 per cent.

We see even bigger improvements with the Snapdragon 805, which will be available this summer. It uses more efficient Krait 450 cores, which clock up to  2.7GHz and a brand new Adreno 420 GPU that Qualcomm claims is 40 per cent faster than the 330. Based on this figure we may be able to assume a clock speed of more than 700MHz. However, perhaps the biggest change is the 805’s doubling of memory bandwidth to (up to) 30GB/s a second.

What do all these number mean in the grand scheme of things though? 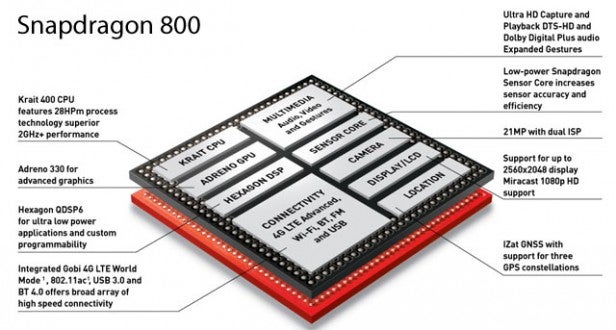 A bump in CPU performance benefits intensive tasks like opening your phone’s photo gallery, not just obvious things like gaming. You might notice that it takes longer and longer for your gallery to open the more photos you have saved with a lower-end phone.

A fast CPU helps make opening apps, rendering large web pages or opening email attachments that much quicker. Qualcomm’s Mark Shedd says the main difference will be noticeable when users “transition between activities and starting new processes. We’re seeing upgrades (to performance) of 15 per cent from the 800 to the 805”.

The truth is that most of the apps you use on your phone or tablet don’t tax your CPU that much, which means an 8 per cent or 15 per cent increase won’t radically alter the experience other than shaving precious time from those CPU-intensive processes. 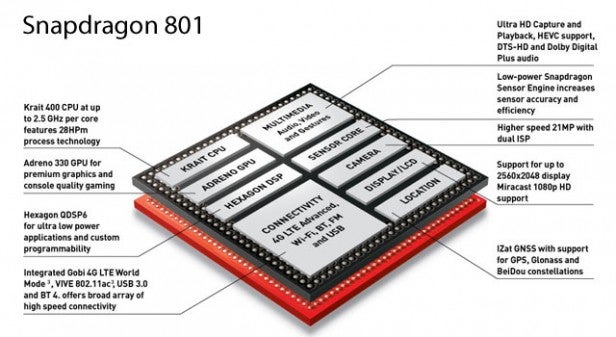 A faster GPU means better graphics rendering, of course. Qualcomm claims the 801 is comparable to the PS3 in this respect. When I asked Karl Whealton, Staff Product Manager CPU Technology at Qualcomm, what “console quality” meant with regards to the 801 he explained “you’re talking about a PS3 level console – the ability to fill a 1080p display and to render a current high quality game.

“You’ll be able to render the same PS3 game on a Full HD mobile phone,” says Whealton. There aren’t any Android games that are really comparable to a previous-gen console title but that the device has the power to run them means that developers can become more ambitious with their projects.

A faster GPU is also key in enabling devices with the 805 chip to support 4K native resolutions, as well as improving game loading speeds.

The main difference between the 805 and the 800/801 is that it was built for 4K. Mark explains “the 805 was designed with 4K in mind. It was plumbed all the way through to support 4K including the thermal hit”. The improved thermal management has also led to better energy efficiency, quite how much that will impact the battery life of phones and tablets remains to be seen. 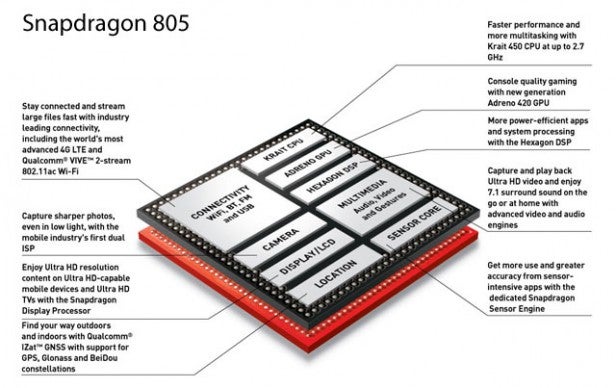 The ISP (Image Signal Processor) is yet another part of Qualcomm’s SoC design. It is tasked specifically with looking after the camera. In very basic terms the ISP helps produce the best image possible from the small lenses and sensors on phones. It does this by controlling white balance, autofocus, HDR, exposure time, colour filter and myriad other smaller functions.

The faster the ISP the quicker it can conduct pre-processing and post-processing. The ISP on the Snapdragon 801 runs at 465MHz as opposed to 320MHz on the 800. Both support a resolution of up to 21 megapixels but Karl Wheaton explains what that performance improvement offers: “The increased MHz improves the post processing capabilities and increases actual camera imaging support. Consumers can expect to see improvements in the camera and that’s about a 45 per cent increase in the ISP performance. And that’s a dual ISP so you are able to use those ISP for multiple tasks.”

The additional grunt should provide much faster autofocus and HDR recombining, meaning you can take photos more snappily. Qualcomm also claims it will improve the results of pictures taken in low-light conditions.

With the 805 Qualcomm has taken the ISP one step further.

Up to 55 megapixels will be supported, much higher than is currently possible on the 800 and 801 (21MP), although more significant benefits will come from performance improvement. Qualcomm claims that the 805 will have the world’s first mobile 1GPixel/s (Giga-pixel per second) ISP helping users take higher resolution photos with advanced post-processing for improved low-light performance. Phones can fiddle with their camera’s output more without slowing down shooting.

Increased resolution support doesn’t mean we’re about to get a raft of 55 megapixel camera phones, though. As Qualcomm’s Karl Wealton explains, “there’s certainly demand for extreme high-megapixel phones, but 21 MP is what we generally support without software but once you get into higher megapixel counts the depth of the lens start to increase and starts to change the design of the phones. Phones become bigger and bulkier. OEMs are pretty sensitive to that design impact because some would prefer a flatter and sleeker design.”

The Snapdragon 801 comes with a few more tricks up its sleeve. It supports eMMC 5.0, upping the maximum interface speeds for flash memory from 200MB/s, on the Snapdragon 800, to 400MB/s. Whether we will see a performance improvement in the upcoming crop of Android flagships is another matter as they will need to come with speedy flash storage to take advantage of the extra bandwidth boost. And that isn’t cheap.

It also comes with hardware enabled DSDA (Dual SIM Dual Active) meaning dual SIM phones can take concurrent calls from both numbers. However, Dual SIM has not really taken off in the UK or US and this feature is primarily aimed at the Chinese market.

While both the 801 and 800 have Cat 4 LTE Modems the 805 comes with the new Cat 6. This doubles the potential speed of 4G from 150Mbps to 300Mbps. Again we’re a little while away from networks supporting these speeds here; the benefits of Cat 6 will be felt by the South Koreans first.

Finally the 805 comes with hardware-based HEVC (H.265) support, which offers better battery life during video consumption and provides a smaller file size for high-quality video files by using better compression techniques. If you want to know more read our feature on H.265.

The step change between the 800 and 801 isn’t huge. It is more of a slight evolution. The benefits we should see in phones and tablets powered by it will revolve around slightly faster performance for opening apps and multitasking and in high-end 3D gaming.

The 805 is different. Qualcomm is betting that 4K is the next big thing in mobile and has designed a SoC that can take full advantage. We’ll start to see phones and tablets using the CPU appear in mid to late 2014.

Next, read our Galaxy S5 preview