At first glance the Galaxy S5 display doesn’t seem to be much better than that of the Galaxy S4. At 5.1 inches it’s just 0.1 inches larger than its predecessor, it uses the same 1080p resolution, the same Gorilla Glass 3 top layer and the same Super AMOLED panel type.

But it’s really quite fantastic in many respects.

Since the wildly oversaturated Galaxy S3, Samsung has put a lot of effort into working on the colour calibration of its OLED screens. And it pays off here.

Samsung’s obsession with packing in features is also a bonus, as you get to choose the character of the Galaxy S5’s screen. As in recent top-rung Samsung phones, you can pick between a bunch of screen profiles, and they’re more effective than ever. 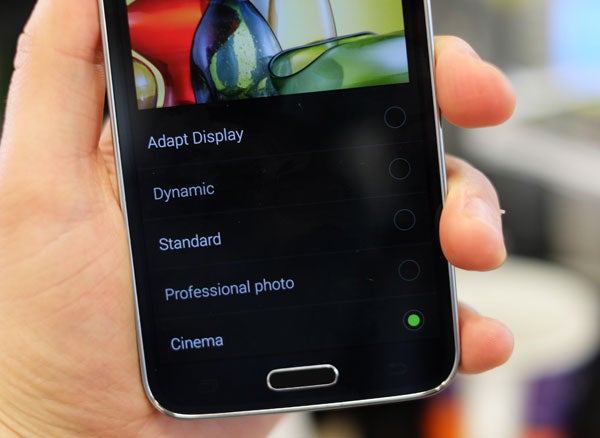 Dynamic mode gives you that oversaturated, larger-than life look that many people associate with a Galaxy S phone. It makes the interface pop and look extremely vibrant, but is not good for watching videos (overcooking of the reds in people’s faces is the main issue).

The Standard, Professional Photo and Cinema modes see a gradual stepping-down of colour vibrancy, hitting a good level of accuracy with the last two. Putting the effort to get these modes right should earn Samsung some real kudos here, but we’re glad it hasn’t enforced accuracy either (not that we’d ever expect that from Samsung).

Just as some people think reference-grade plasma TVs look dull and boring next to bright LCD TVs, some will love the dazzling look of the Dynamic mode’s colours. It does make the interface look great, if nothing else. 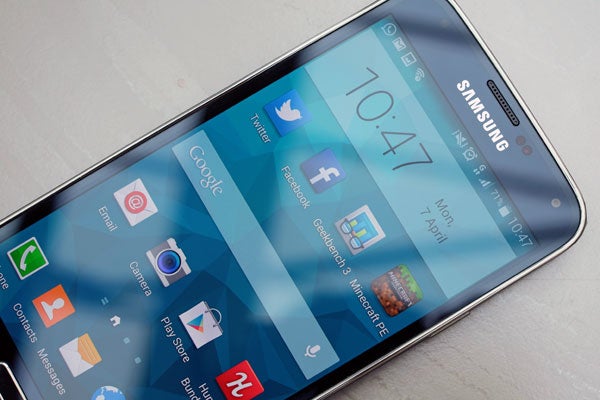 There’s also an adaptive mode, which alters the screen tone in-line with the app you use. However, it doesn’t work with all apps so perhaps you’re better off picking one of the consistent modes. We’d suggest avoiding Dynamic, but there’s no accounting for taste.

As we expect from a Super AMOLED panel, contrast and black level are excellent in the Galaxy S5. Its blacks are far more impressive than the HTC One M8‘s, although you will need to be in a darkened room to appreciate this. Top phones of the last 12 months almost universally have excellent screens. Put the phones in a dark room, though, and the diffference between OLED and LCD is immediately apparent. 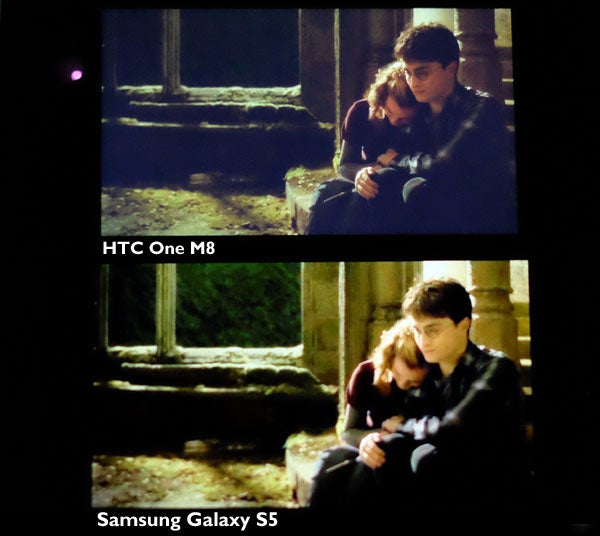 Although the S5 screen looks blown out, this is the fault of the camera (/photographer). The real points to note are the S5’s faultless black levels and the masses of extra shadow detail. Just look at how much clearer the bushes in the window are compared to the HTC One M8.

On another more OLED-related note, we’re glad to report there’s none of the odd blue tint that affects older Galaxy S phone screens when viewed from a horizontal angle. Viewing angles are superb, with perhaps just a hint of colour shift at certain angles – but nothing 95 per cent of people could notice.

There’s one lingering point to criticise, and it’s something we’re only including for the sake of completeness. Look up close and there is a tiny, tiny bit of fuzziness in areas of block white. This is a result of Samsung’s continued use of a PenTile array screen.

In the Galaxy S5, the phone’s pixels are made up of four sub-pixels – two green, one blue and one red. Most screens use three. They’re arranged in a diamond shape, and this has a less tight regularity, with more ‘gap’ in-between than you get with a more traditional RGB sub-pixel LCD phone like the HTC One M8.

In devices with much lower pixel density displays, like the Galaxy Tab Pro 12.2, using a PenTile layout can have serious effects on the perception of sharpness. But here you really have to try to see it. This remains a seriously sharp screen. 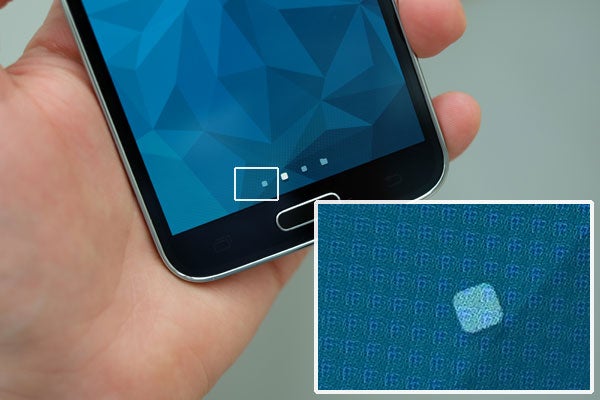 The pixels are too dense for our camera to pick up subpixels, but you can see some of the PenTile ‘patterning’ effect here

Screen brightness is impressive, able to mitigate the high reflectivity of the top Gorilla Glass 3 layer. However, it is a bit less bright than the top LCD-based phone screens in normal conditions. Side-by side, you can clearly see that the maximum brightness settings of the HTC One M8 and iPhone 5S appear a bit brighter in daylight. The Galaxy S5 wipes the floor with the competition at night-time, though.

Having such a large, bold screen makes the Galaxy S5 an obvious choice as a mobile video player. And Samsung has a history of packing-in much better-than-average video capabilities into its phones.

True to form, the phone includes a Samsung-made video player application. It’s simple, but unlike the Google Movies app, it is there to let you play your own videos, not ones you buy or stream from Google, Samsung or anyone else.

Format support isn’t quite as up-to-date as we would have expected from a Samsung phone of a few years ago, though. MKV, DivX and Xvid files all play fine, but the Galaxy S5 does not support AC3 audio fresh out of the box. 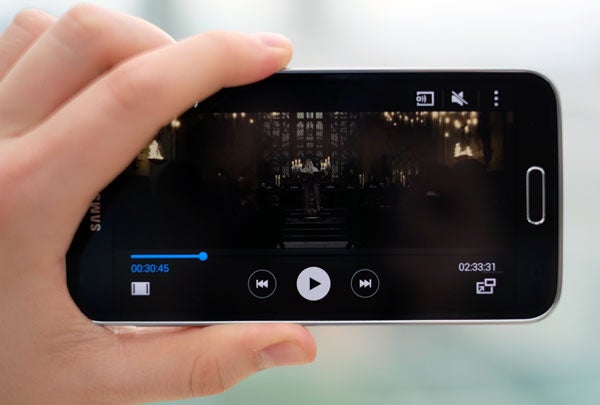 This is an extremely common audio format for movies distributed online. Its omission could be seen as an anti-piracy move by Samsung, especially when it is/was supported by the Galaxy S4. But if so, it’s one that’s easy to circumvent with the help of a third-party app that offers software decoding of audio/video streams. MX Player is an Android favourite.

Aside from AC3, audio support is fair, with FLAC and Vorbis included along the various types of AAC, WMA and MP3. As with video, real audio enthusiasts will need to call upon a third-party app (for APE support and so on), but if you’re that far down the rabbit hole, you probably have a favourite app already anyway.