The Galaxy S5 runs Android 4.4 KitKat and a new version of the TouchWiz interface. It sees Samsung struggle with two conflicted priorities.

Samsung knows that the trend is currently towards simpler, more visually intuitive interfaces, but ever since the Galaxy S series began, one of its selling points has been that its phones pack-in more features than the competition. The new version of TouchWiz is a result of these clashing approaches.

On the side of simplicity, fewer apps and features come pre-installed. Things like S Translator and WatchOn are no longer jammed in. Instead, you grab them – if you want – for free from the Samsung apps portal. The phone’s apps menu is dominated by Google’s app suite, rather than conspicuously Samsung-branded apps. 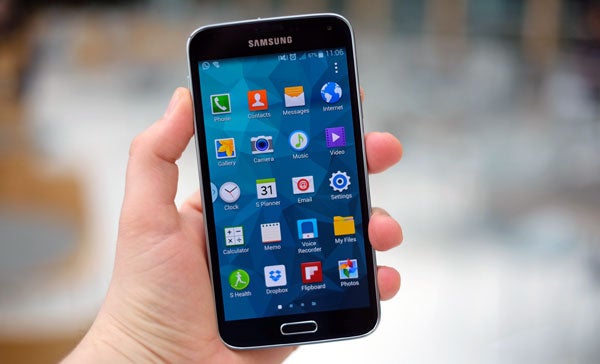 Samsung still supplies a few of its own utilies such as a barebones note-taker, the S Planner Calendar and a Samsung browser. But to call these bloat would just be unkind. They’re real essentials.

There’s just a handful of apps some might find extraneous this time. Here’s what you get:

A long-standing Samsung chat app. It works just like WhatsApp and also lets you have video chats.

You can chat with single friends or a group within a chat, and as it works over your Wi-Fi or mobile internet rather than SMS, there’s no additional cost involved. 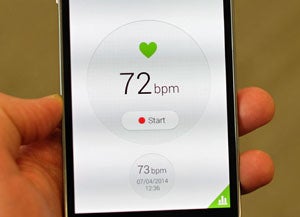 Samsung needed to pre-install this one to justify the incorporation of a heart rate sensor. It’s a fitness-tracking app, and one we’ve seen before in other Samsung phones. It offers a pedometer and proper exercise tracking for walkers, runners, hikers and cyclists, including GPS tracking and mapping.

It does smack a little of Samsung trying to do a little too much itself, though. For example, we imagine many people will want to do little more than see how many steps they take a day. The HTC One M8’s Fitbit app does this in a much clearer, more matter-of-fact way than Samsung, which has over-produced the S Health app with it use of heavy visuals. But, hey, it is free.

This is Samsung’s Siri equivalent, and lets you do things like open apps, call people and make calendar events. However, it’s not quite on-par with Google Now or the upcoming Windows Phone 8.1 Cortana in terms of how advanced it is. And its voice synthesis isn’t top-notch either.

Google Now comes pre-installed on the phone, and we’d recommend using that as your digital assistant rather than S Voice. Given how much focus Samsung has given S Voice in the past, though, we’re not surprised it lingers on. 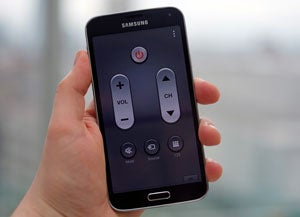 Co-opting some of the features found in the Galaxy S4‘s WatchOn app, Smart Remote lets you set reminders about TV shows you like, and lets the Galaxy S5 act as a universal remote.

As with any universal remote, setting the thing up can be a bit of a pain, but it does work. We tried it with a Pioneer TV and Onkyo receiver and were up and running within a few minutes (later-discovered mis-mappings not considered.)

The Galaxy S5 now has fewer pre-installed apps than the HTC One M8.

As well as cutting down on the number of pre-installed apps, several elements of TouchWiz have been redesigned. The apps and widgets headers of the apps menu in the Galaxy S4 have gone. Like the Nexus 5, all you’ll find on the apps menu are apps. And you can bung the ones you don’t want to use in folders, or ‘hide’ them completely.

Your basic home screens are much the same as they were in the Galaxy S4, but now there’s also a My Magazine screen accessed by flicking left-to-right from your left-most home screen. My Magazine is a full-screen customised front-end for news popular app Flipboard.

The way it works is you choose a bunch of categories that span new topics and social networks, and each of these gets one entry on your My Magazine home screen. You might see a tech story, an arts/cultre story and a recent Tweet. Tap on these and you’ll get more topics, which can can flick through sequentially. 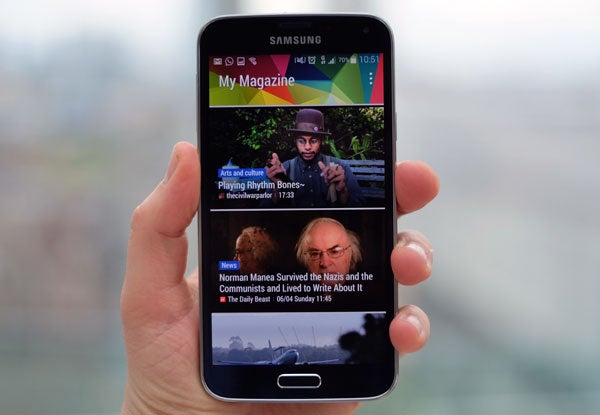 It’s probably the best-looking part of the Samsung Galaxy S5 interface (not least because Samsung didn’t really make it), but the way it works isn’t 100 per cent perfect for its position right at the front of the phone. A home screen updater like this should be happy with 10 seconds of your time, but My Magazine wants five minutes, at least.

That’s not to say it’s not good, but it is not for everyone. We imagine the latest HTC BlinkFeed – which is a much more quick-fire home screen feed – will be used by a wider audience.

Aside from My Magazine, which feels like a module plugged-into TouchWiz, Samsung has tried to give the Galaxy S5 interface more visual coherence than before. The new thematic glue is colourful circles.

These circles make up the toggles in the drop-down notifications bar and the dozens of options in the Settings menu. Various elements do look better this time around, but true style still eludes Samsung. 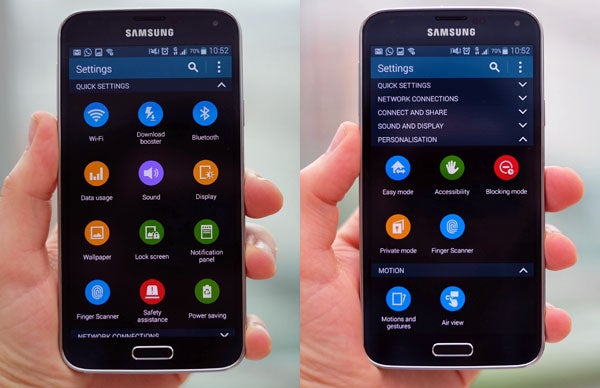 This is still not a particularly good-looking UI without tweaks and, despite Samsung’s best efforts, it continues to lack a little visual cohesion. It’s not a huge issue unless you really care about the software aesthetics of your phone. But now that the Galaxy S series alone has sold more than 200 million phones, it feels like it deserves a ground-up redesign rather than just another facelift in a long series of semi-successful cosmetic procedures.

To check that this wasn’t a result of having used too many version of TouchWiz over the years, we tried out the Nexus 5 Google Experience UI on the Galaxy S5 (we’ll be back with how to do this soon in our upcoming tips and tricks article) and found that it does indeed have a more characteristic, confident look. And that interface is basically newborn (if based on the ‘standard’ Android UI). 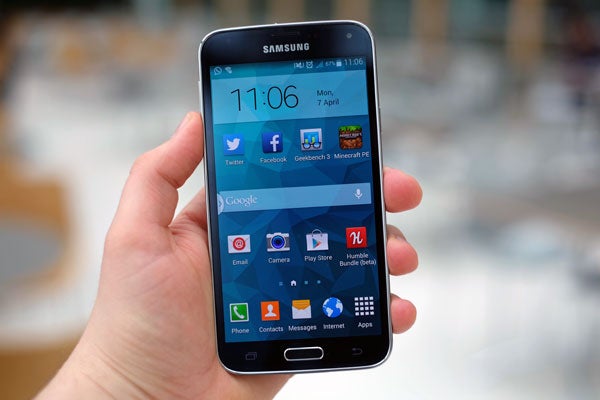 The one other common criticism of TouchWiz is that it is a major performance drain. And this is something we’ve experienced first-hand recently in Samsung’s Tab tablets like the Note Pro 12.2.

TouchWiz still lacks the immediacy of vanilla Android or just about any Windows Phone, but we didn’t experience any serious slow-down. At its worst, TouchWiz can cause glitchy movements when just flicking through app menu screens, but there’s nothing so obvious here. TouchWiz is still a little slow at times, though. In our testing it was occasional – the most common issue being the contents of menus taking a fraction of a second to actually show up.

We experienced just one cash during testing, which happened when editing an image in the photo gallery. But that’s not bad going – to any cocky iPhone owners out there, your apps do crash, you’re just not told about it.

As well as a few extra apps, TouchWiz provides a few Samsung-specific ways to interface with the Galaxy S5. It is not all new, but plenty worth mentioning regardless.

Multi Window is Samsung’s classic multi-tasking mode. You hold down on the back soft key to bring up the Multi Window bar, from which you can drag two apps to run on-screen at once.

It works pretty well, and lets you do things like take notes while reading the web, chat on WhatsApp while reading emails or open two browsers at once. It is not an invasive feature either – with the Multi Window bar hidden you can pretend it’s not part of the Galaxy S5 at all. 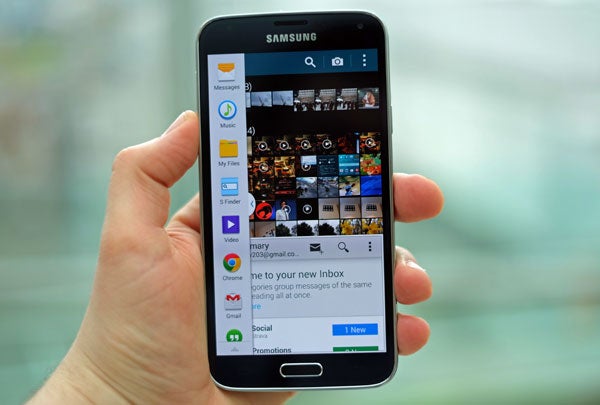 Air View returns, having made its debut in the Galaxy S4. The feature lets you bring up previews of certain info by hovering a finger over the screen. As standard it’s switched off, as it has the potential to be quite invasive and annoying. But it lets you preview pictures in the gallery, preview events in the S Planner calendar app and preview frames in videos when fast forwarding in the Samsung video player app. It can also be used as a kind of predictive system when typing out phone numbers. 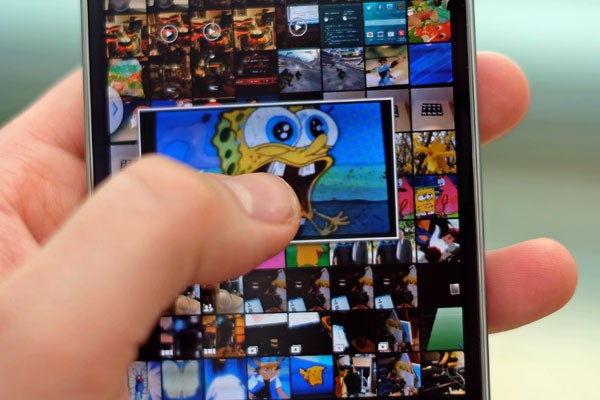 There are lots of other minor features like these, including a Private Mode to hide certain videos, photos and other files from the eyes of others. As ever, there is an awful lot of features to find in the S5 if you scratch at the phone’s surface. Next, we’ll look a little deeper into the technical aspects of the hardware that powers the Samsung Galaxy S5.