It is often said that megapixels are meaningless in mobile phones. However, give a high-resolution phone like the Galaxy S5 a bright and sunny day and it will generally be able to resolve more detail than a lower-resolution phone.

As our standard view of London test shows below, the Galaxy S5 is capable of producing much, much more detailed photos than the HTC One M8 – one of its key rivals. The difference between the Galaxy S5 and Galaxy S4 is less marked, but it is there. By increasing sensor resolution without reducing the size of the photo sensor pixels, it doesn’t lose out to its predecessor in any way.

If you passed on reading the last page on camera hardware, the Galaxy S5 has a 16-megapixel sensor of ½.6-inch size. It’s a mite smaller than the Xperia Z2‘s sensor, but crucially the camera pixels are of the same size.

In daylight conditions, sharpness in photos is excellent. It falls off a bit in the extreme corners, but not to a severe extent. With fine, pixel-level details such as the branches of far-away trees you can see the evidence of the Galaxy S5’s image engine doing a bit of sharpening, but nothing that should stop you from being able to crop into pictures should you wish. 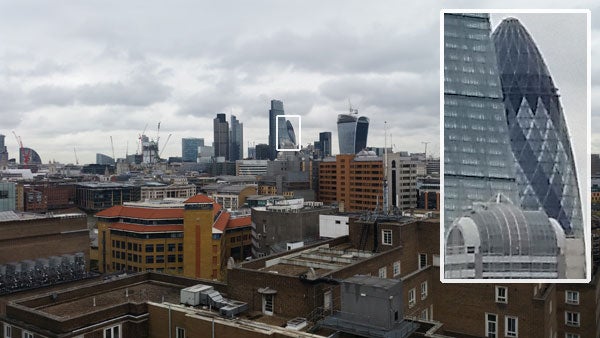 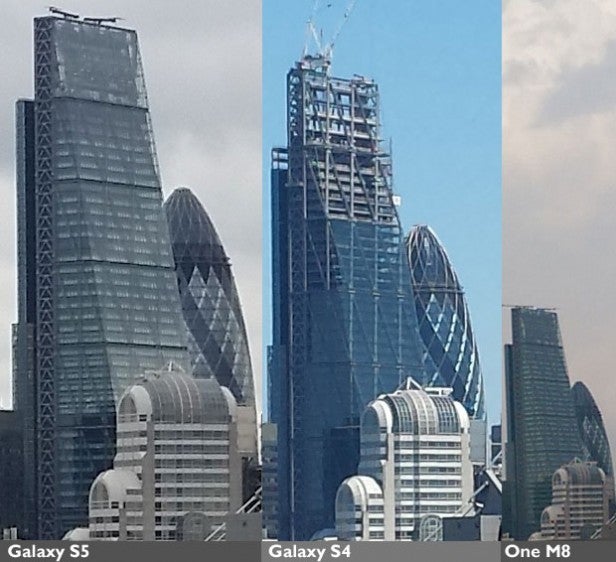 The S5’s sharpening algorithm seems to be less invasive than the S4’s – and let’s not forget the light conditions are very different here. 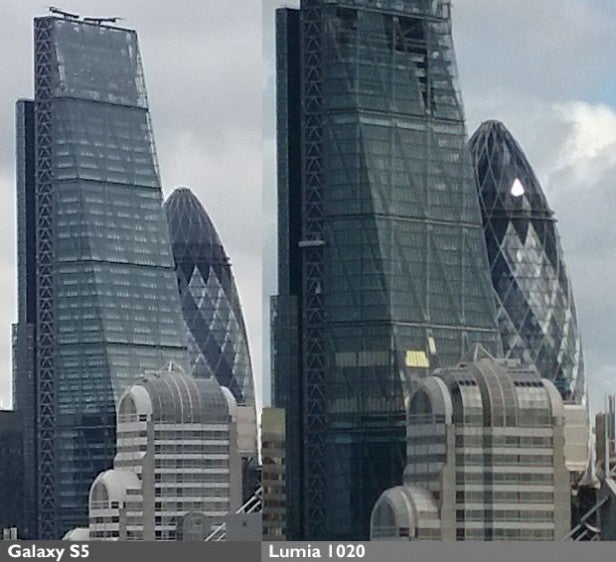 Before we get too excited, the S5 is soundly beaten by the Lumia 1020 on the detail stakes.

Exposure metering is fairly reliable too. It’s not hard to take good photos with the Galaxy S5.

When focusing, the phone uses a mix of contrast detection and phase detection, and it is indeed a good deal faster than a plain contrast detection system in many situations. A/B testing with the contrast-based HTC One M8, the Galaxy S5 is much quicker at switching between fairly close objects. Samsung’s claim of 0.3 second focusing naturally depends on the lighting and the subject, but the Galaxy is roughly twice as fast as the HTC.

You’re less likely to notice these focus benefits when shooting far-away subjects, though, where the focusing element only needs to move a fraction to alter focus. Still, any speed improvement is handy.

We did notice the odd glitch when using face detection, though. The Galaxy S5 would occasionally focus on the near background behind the subject, suggesting the camera may have been favouring a PDAF focus point that wasn’t actually sat on the subject. But we’re speculating at this point.

Regardless, these speed improvements make the Galaxy S5 about as fast as an iPhone 5S in daylight conditions. 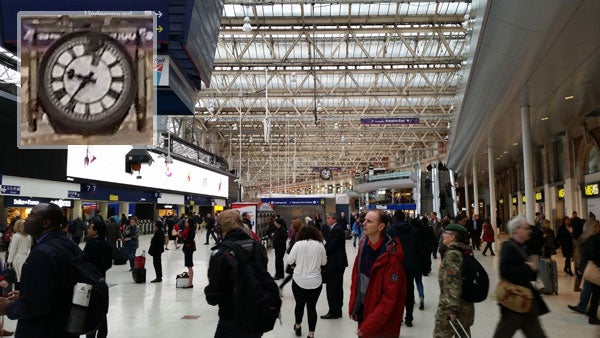 A phone you can tell the time by. Not bad, eh?

The situation changes completely when the lights go down, though. The Samsung Galaxy S5 small pixel pitch camera sensor means without drastic measures the phone will struggle with low lighting compared with an iPhone 5S or HTC One M8.

Samsung has provided the necessary drastic measures, though. When shooting with the Auto mode, the Picture Stabilization feature kicks in once the light dims to a certain level.

Picture stabilisation isn’t traditional optical image stabilisation, which uses a motor to tilt lens elements in line with your movements in order to allow longer exposure times. Instead, the Galaxy S5’s software stabilisation appears to take a whole series of photos using different settings, and then merges them together to create a single image. A kind of turbo HDR mode, it’s likely these settings include sensitivity (ISO) and exposure compensation.

It is remarkably effective, but also really quite slow. The time it takes to produce the photo depends on how rubbish the lighting is, but it can get on for 5-6 seconds. Given standard HDRs take about a second, the Galaxy S5 could be experimenting with a dozen or more exposures here.

Picture Stabilisation is smart, though. The phone asks you to stay still while using picture stabilisation, but if you move half-way thru, the Galaxy S5 seems to discard any shots that don’t fit the scene rather than producing a blurry mess. 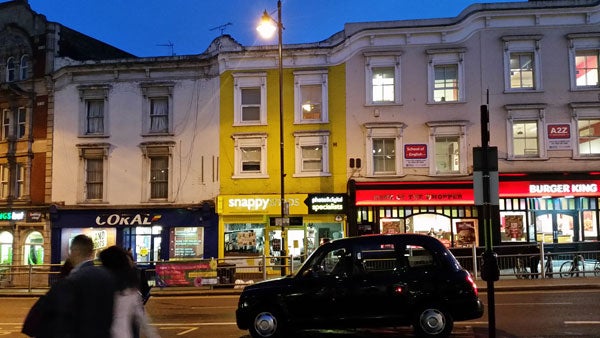 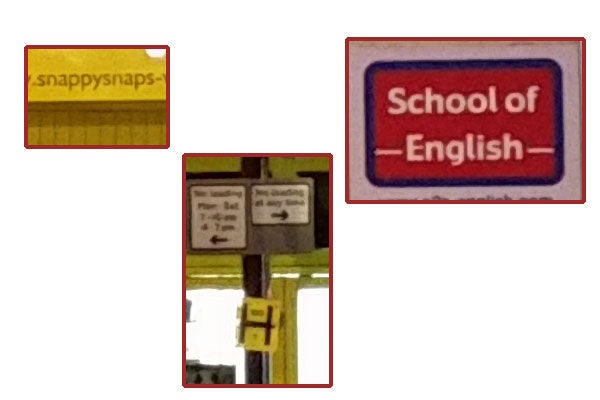 These 1:1 pixel crops from the above photo shot the impressive detail the S5 maintains in low-light conditions

Night-time shots are still not going to look anywhere near as good as your daylight ones, but stabilisation and the new ISOCELL sensor do bridge the gap between this phone and ‘low light specialist’ mobiles like the HTC One M8 in image quality terms. Noise levels are quite impressive, and fine details aren’t wiped away as a result – detail is actually slightly better in the stabilised shots than the non-stabilised ones. 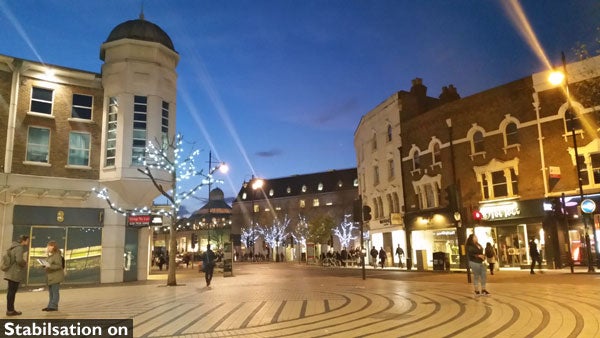 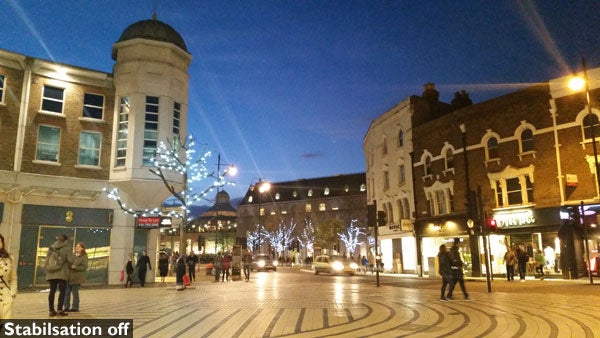 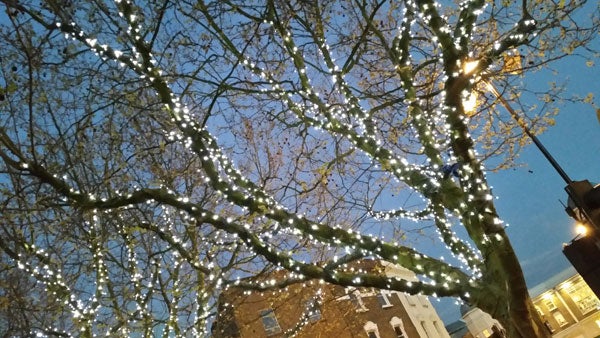 Some low-light shots can end up looking a little ‘painterly’

As the Galaxy S5 doesn’t have any big problems with overeposure, our tests show that it can at times produce better-looking shots of stationary objects at night than an HTC One M8. What’s particularly impressive is the level and fidelity of colour offered by these low-light shots, and this is largely present whether you use stabilisation or not. Colour performance is something that Samsung says is improved by the new ISOCELL sensor, so we’ll give it the credit.

For shots of people at night, though, the Galaxy S5’s stabilisation mode is a little slow (people get bored when asked to pose). Weirdly enough, the blurring caused by the composition of various images is actually quite similar to the blurring effect of moving objects we saw in the Lumia-series stabilisation, which uses longer exposures for better low-light shots.

Would real optical stabilisation be better? Absolutely. And indoors low-light shots do struggle with white balance a little, tending to make photos look yellowy at times.

So far we’ve been talking about shooting completely flash-free. The Galaxy S5 does have a flash, and it is pretty powerful. However, it is the standard single-tone, single-LED type that generally doesn’t produce great results. 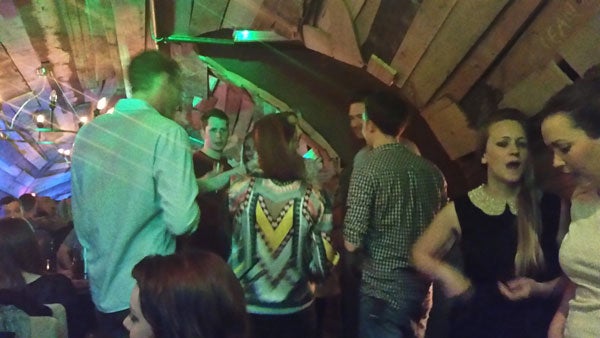 This is a very tricky shot without flash. Despite movement among the subjects, it’s not completely awful

As we’ve come to expect of top Samsung phones, the Galaxy S5 has a pretty great HDR mode. It’s effective, but not to the extent that photos look fantasy-style fake.

It’s a great way to introduce loads more shadow detail in photos, and to deal with bright-but-cloudy skies that would otherwise risk being overexposed. Here are a few demos: 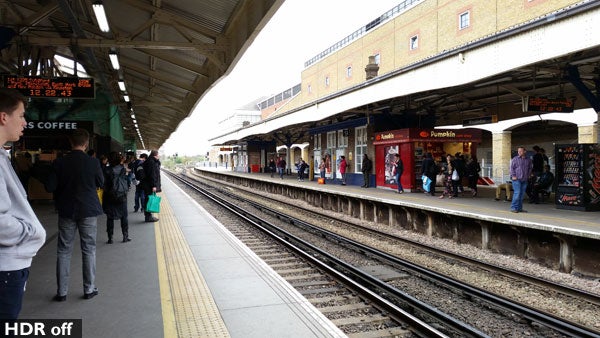 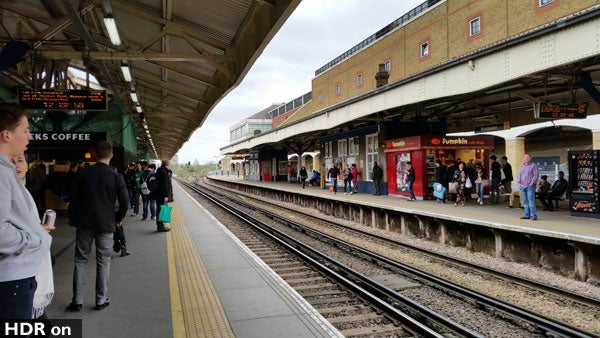 Here HDR reduces overexposure and increases detail in the sky 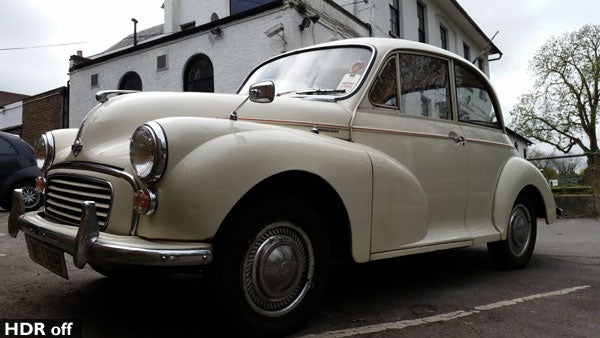 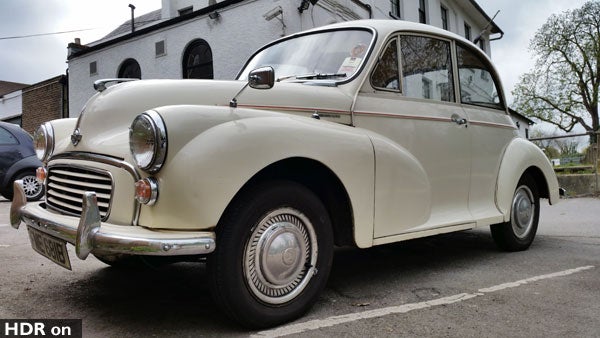 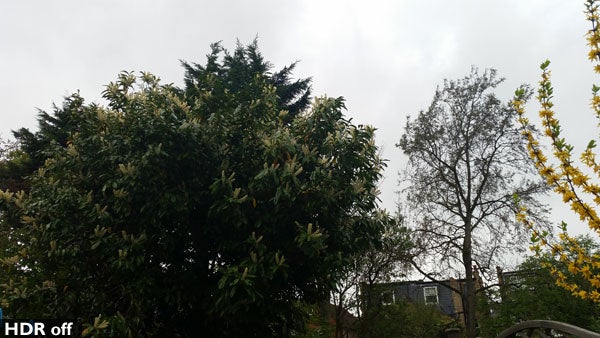 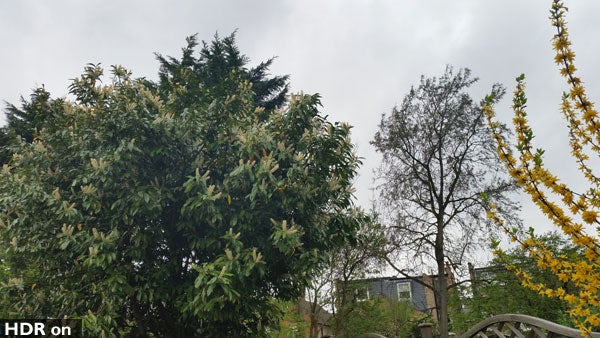 You can see masses more foliage in the HDR shot

If we were to believe the Galaxy S5’s focusing reticule, the phone can focus on objects just a few centimetres away. In reality, it mis-reports close focusing at times and its minimum focal distance is roughly the mobile phone norm – 10-15cm. However the relatively ‘zoomed-in’ 31mm (35m system equivalent) focal length of the lens makes getting close-up photos pretty easy.


For reference, the Sony Xperia Z1 lens is equivalent to 27mm, the HTC One M8 28mm and the iPhone 5S lens a shade under 30mm. The longer the focal length, the easier it will be to take close-ups, assuming parity in minimum focal distance. Phone makers try to sell wide angle focal lengths as a good thing, but for rear cameras they are not beneficial.

This is the place where we really miss the manual focusing mode we talked about in the camera app section – thanks to the excellent screen your eyes can be a better judge of focus than the Galaxy S5’s reticule when shooting close-ups. 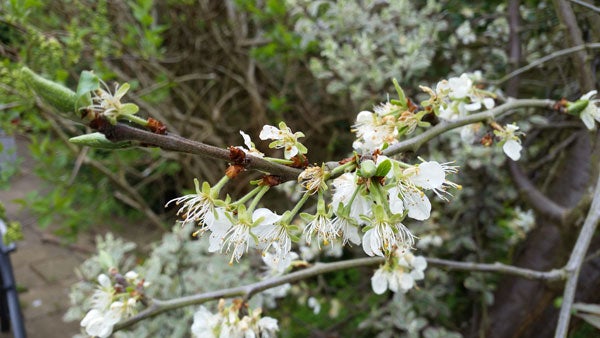 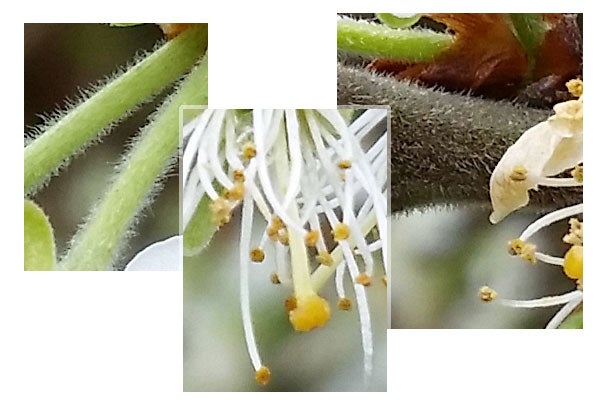 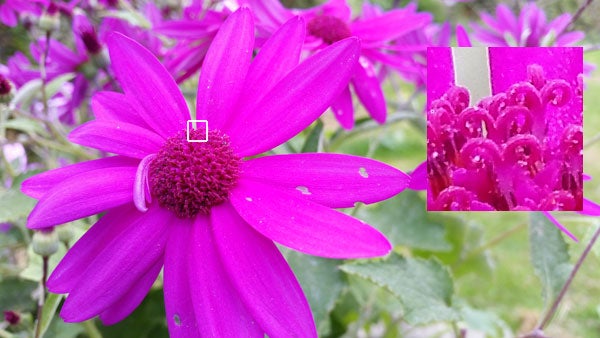 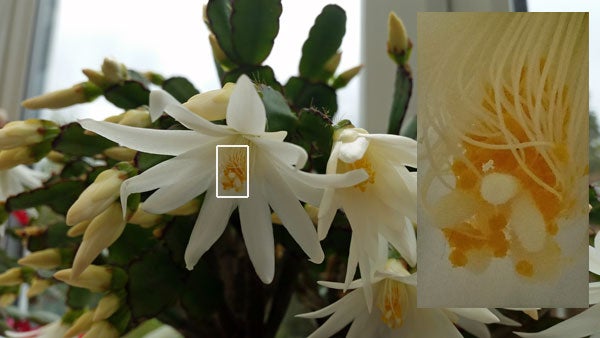 The Galaxy S5 shoots video at up to 4K resolution, but in this mode you lose some of the video modes you can use when shooting at 1080p. These include video stabilisation, HDR and stills capture during video.

The phone defaults to 1080p, and we recommend you stick with it for this reason. You can also shoot at various speeds. It maxes out and 8x slower (120fps capture) and 8x faster. However, when shooting in slow motion capture quality is limited to 720p resolution, and owing to the lesser light retrieval per frame, image quality takes a significant hit too. 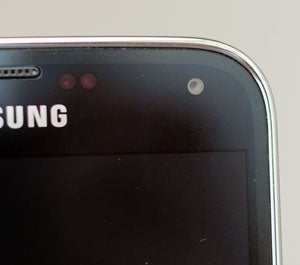 Last of all in the camera section we come to the front-facing camera. It is nothing special.

It uses a 2-megapixel sensor, and it does not seem much of an upgrade – if an upgrade at all – over the Galaxy S4’s front camera. It’s pretty noisy with anything but perfect light conditions, and produces much worse selfies (and video calls) than the HTC One M8. The new HTC phone has a much better 5-megapixel front camera, offering better detail, less noise and much better colour reproduction.