What is the Samsung Galaxy Note Pro 12.2?

The Samsung Galaxy Note Pro 12.2 is an expansion of the Note phone and tablet range. It’s a 12.2-inch Android tablet with a pressure sensitive S Pen stylus.

Samsung has packed the Samsung Galaxy Note Pro 12.2 full of business apps to help give it a different angle to the new 12.2-inch Tab Pro. However, the stylus makes more sense than ever on a large screen like this, and it is a cut above its Tab-series brothers in a few respects.

The large screen, relatively heavy body and pricier-than-an-iPad Air £649 cost mean it’s not for everyone. But it’s a great tablet for the right person. 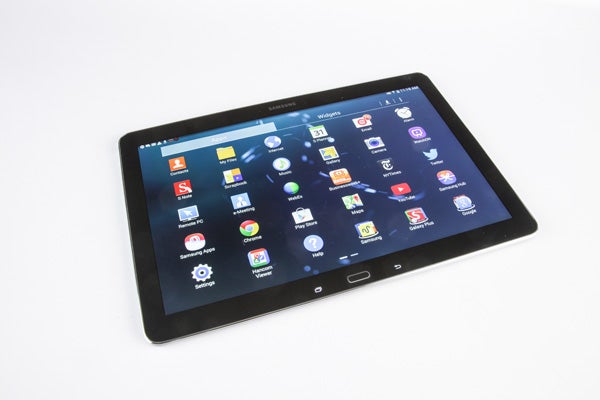 Until last year, Samsung made glossy plastic tablets. Virtually all of its tablets and phones were made of shiny plastic, and it led to near-constant criticism of its top-end devices. They simply didn’t look or feel as expensive as they were.

Samsung’s answer to this is a new design, first seen in phones like the Galaxy Note 3 and shared by the Samsung Galaxy Note Pro 12.2. Glossy plastic has been switched for rubberised plastic with a leather-effect texture. To complete the fake ‘handmade’ look, there’s pretend stitching embossed into the edges of the back. 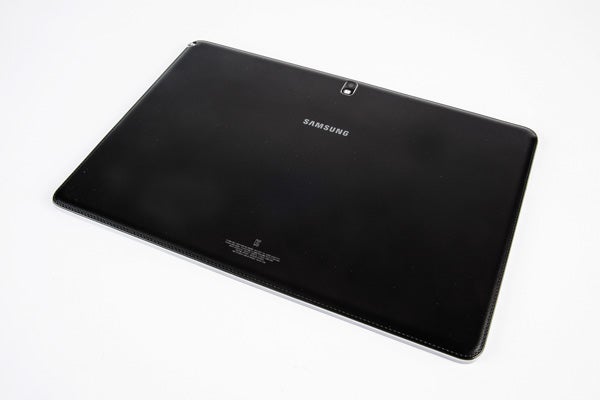 It’s not a look we love, but it comes across better here than in previous ‘leather’ tablets like the Samsung Note 10.1 2014 Edition. The Galaxy Note Pro 12.2 is better-built than its brothers, and is far stiffer than we expected from a Samsung tablet as large as this. Its outer shell may be plastic, but there’s a rigid metal cage underneath that stops it from flexing.

The rubberised finish is also grippier than glossy plastic or anodised aluminium.

However, before buying a Samsung Galaxy Note Pro 12.2 you need to think carefully about how you’ll use it. At 750g it’s too heavy to use in one hand, making it much less flexible as a portable tablet than an iPad Air or Samsung Galaxy Tab Pro 8.4. It’s large too – a 12.2-inch screen is larger than that of some small laptops.

The placement of the front soft keys and the central select button are not designed for one-handed use at all either. Samsung has sensibly given up any idea of trying to make a 12.2-inch tablet ultra-portable in the same manner as its phones. However, the buttons do respond to the S Pen stylus as well as a finger – the earliest Note devices’ buttons didn’t. The S Pen lives in a little hole on the tablet’s right edge. 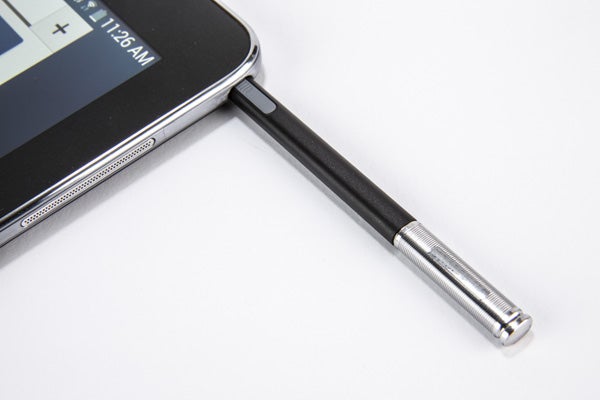 This is a tablet aimed at the rather vague target of power users, and this is seen throughout the hardware, not just in the large screen. Like the Galaxy Note 3, it uses a USB 3.0 port rather than the older, slower USB 2.0 type. It looks like a normal microUSB port with a half-formed twin attached. In the Note 3 we thought it was overkill, but here it fits in well – it’s not as if there’s not enough edge space to go around.

The Samsung Galaxy Note Pro 12.2’s USB 3.0 port allows much faster file transfers, and faster charging over a USB 3.0 port on a computer. However, you’ll still want to use the charger if you can. USB 2.0 power output maxes out at 500mA, USB 3.0 at 900mA. The tablet’s charger is a 2000mA power source, and even with that charging takes a while.

This port is also MHL-compliant. Using an MHL adapter you can output the
Samsung Galaxy Note Pro 12.2’s screen content to any display with an
HDMI input. 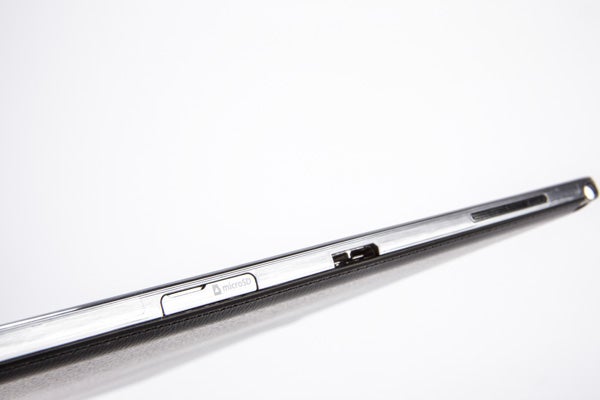 Completing the trinity of basic geek-friendly hardware features is the microSD slot. You get 32GB storage (23GB accessible) as standard, but a covered memory card slot lets you add up to 64GB pretty cheaply.

The obvious missing thing here is a way to turn the Samsung Galaxy Note Pro 12.2 into a laptop. There are no docking points on its bottom or its sides that might open the doors to a keyboard accessory that would turn the Note into a Android laptop.

If you want a laptop-tablet hybrid, this isn’t it. Look to the Asus Transformer Book T100 or the Transformer Pad TF701T instead. You can, of course, use a Bluetooth keyboard with the Note 12.2, though.