What is the Nexus 6?

Google has decided to shift its Nexus range from mid-range to high-end. It started with the Nexus 9, a tablet built in conjunction with HTC, but the results were mixed. The strategy’s now been applied to its phones, starting with the Motorola-made Nexus 6.

It’s not hard to figure out that it’s made by Motorola, either. The Nexus 6 is just like a Moto X that’s hit a teenage growth spurt – it looks and feels a little awkward and gawky. Individually and on paper all the elements that bring it together – design, screen, camera, battery life, performance – are strong. But there are flaws to each that make the Nexus 6 miss the mark and fail to hit the heights reached by its competitors.

There’s no getting away from it, the Nexus 6 is massive. Wider than an iPhone 6 Plus and taller than a Samsung Galaxy Note 4, this is a giant among giants. And that means the Nexus 6 is a tricky phone to handle. 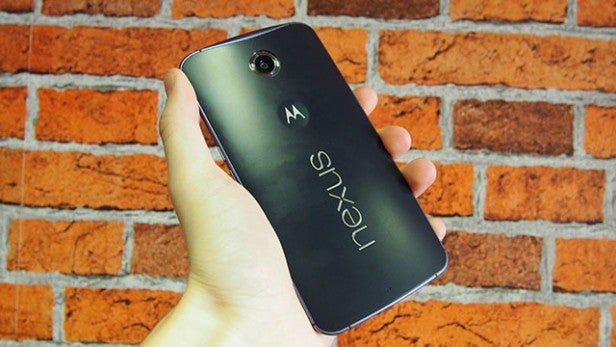 Is the Nexus 6 too big? That’s the key question. The curved matte–plastic back rests well in your palm, but you can’t stop your other hand coming to the rescue when trying to handle this beast. Your brain keeps telling you to get both your mitts involved.

Some people will have the same issue with other, slightly smaller, phones. But Apple and Samsung offer some one-handed use assistance, whether through software or just by virtue of being that little bit slimmer and thinner. 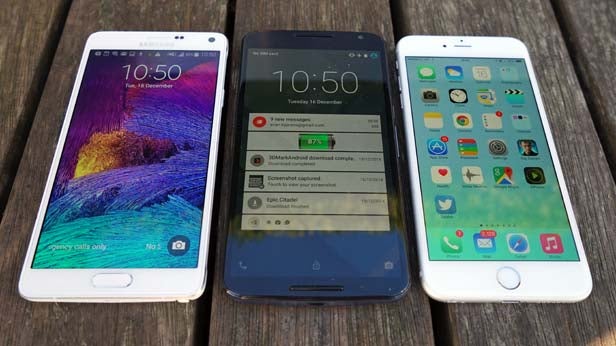 They don’t look that different, but the Nexus 6 (centre) is just that bit bigger than rival phablets

It’s not just the Nexus 6’s width that causes issues. The bottom screen bezel is less than 1cm thick. You won’t often hear us complaining about thin bezels, but getting to the soft keys at the bottom of the screen means you really need to stretch to reach them. This becomes even more of an issue if you’re left-handed.

All the physical buttons are located on the right-hand side of Nexus 6, within easy reach of your right-hand thumb. If you’re a lefty, though, you’ll need to stretch your index finger around the phone – and to do that you’ll need to hold it higher up. This makes it near impossible for your left thumb to get to the soft keys without juggling the phone down. It’s a tricky manoeuvre, only helped by the phone’s decent grippiness. 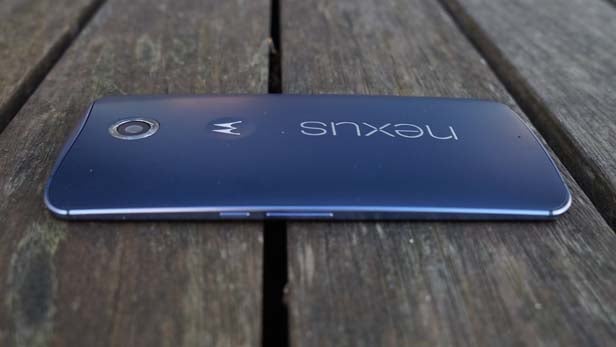 OK, so we’ve established that the Nexus 6 isn’t for one-handed use unless you have particularly meaty paws, but what about the rest of the design?

The Nexus 6 bucks the trend of previous Nexus phones. This is a high-end device aimed at taking on the might of Samsung and Apple, not a low-cost mid-range Android. While last year’s Nexus 5 and its predecessor, the Nexus 4, offered fantastic value, they came with limitations. Battery life, design and camera were compromised to keep costs (and therefore price) down. Plastic was the order of the day. Not so for the Nexus 6. 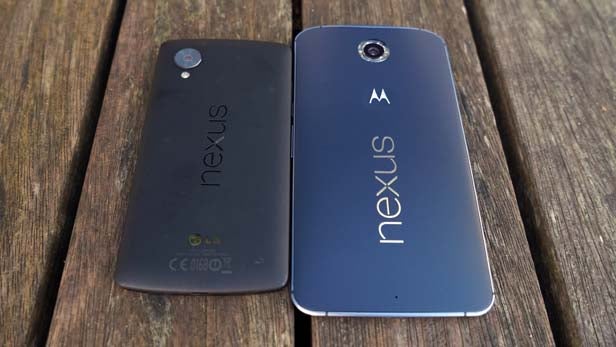 From the front the Nexus 6 is a handsome slab of glass with raised front-facing stereo speakers – one above, one below the screen. The gaps in the speaker lead to lint and fluff getting stuck in them, but that’s nothing a quick blow or sliver of paper can’t sort out. Still our minor OCD leads us to keep cleaning them out.

The Nexus 6 still uses plastic to cover the back, but it’s hard plastic, not the soft-touch type of the Nexus 5. It feels thick and sturdy, much better than the thin, plastic, removable back covers on some phones. A metal frame runs all the way around the Nexus 6, punctuated only by the Nano SIM card tray, 3.5mm headphone jack, Micro USB port and eight thin pieces of plastic dotted around the edge. These let the phone signal out, but also add to the phone’s looks without making it too fussy.

The Nexus 6 is a well-made phone, better looking than the LG G3 and on par with the similarly metal-edged Galaxy Note 4. Only the metal unibody iPhone 6 Plus feels like a more premium product, but then that’s a lot more slippery without a case on. 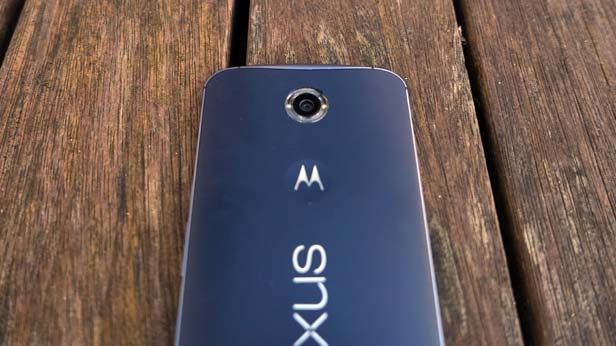 Some other design elements are less successful. The Nexus logo on the rear is more than a little bling, particularly when coupled with the silver Motorola logo just above it. To make matters worse, the 13-megapixel camera comes surrounded by a naff clear plastic ring that also covers the dual-LED flashes. It’s nowhere near as elegant as the metallic ring around the HTC-built Nexus 9’s camera.

Regardless of a few suspect design decisions, the 6-inch Nexus 6 is well built and good looking. It’s just a little too large to handle.

While there have been reports that the Nexus 6 is waterproof, there’s been no confirmation by the manufacturer and it has no official IP rating. We recommend keeping it well away from the wet stuff. If you want a phone that you can use with impunity on the beach or pool then look towards the Sony Xperia Z3, Galaxy S5 or HTC Desire EYE instead.