What is the HTC Desire EYE?

There aren’t that many phones that focus on the front-facing camera. Most have one to deal with the odd video call, but not much else. All that’s changed over the past few years with the growth in popularity of the selfie. Some manufacturers have improved their front facing cameras to cater for the growing minority. No one has gone to the lengths HTC has with the Desire EYE, though. There’s a 13-megapixel camera on the rear – so far so normal. There’s also a 13-megapixel camera on the front – this phone has stellar selfie credentials.

The HTC Desire EYE isn’t a one trick pony. With a quadcore Snapdragon 801 processor, 2GB RAM, a 5.2-inch full-HD IPS screen and water resistance this is a lot more than just a phone for the selfie generation. In fact this is a handset that can square up to most flagships out there. It also means that the HTC Desire EYE is the most expensive Desire phone in HTC’s range, but in this case the extra cost is well worth it.

Forget the metal body of the HTC One M8, the Desire EYE goes for plastic all the way.

That’s not to knock it, though. HTC’s found a way of creating two tones of plastic from a single piece. The Desire EYE comes with a crisp line distinguishing the unibody back from its sides. It’s seamless and gives the EYE a fresh and funky look. The polycarbonate feels premium, too. A slight soft-touch finish gives the back some grip and warmth without feeling in any way tacky and means it’s also hard wearing. In the weeks we’ve had the Desire EYE in our pocket with other, metal, phones it hasn’t gotten marked one bit.

As with all soft-touch plastic plastic, the HTC does show up greasy finger marks more than a metal phone does. Because the plastic is a bit harder than the likes of the Nexus 5’s, it does so to a lesser degree. 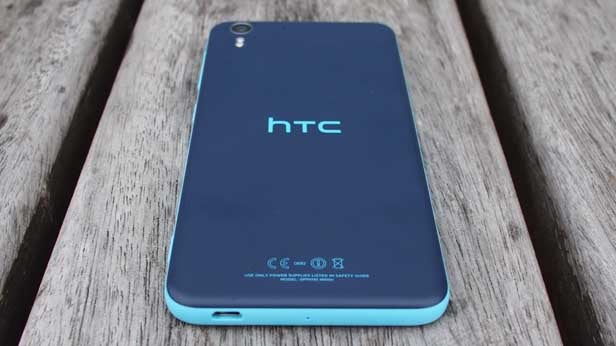 The button positions are less of a success. The power, volume rocker and dedicated camera buttons feel flimsy and almost flush with the body. Pressing them doesn’t inspire confidence and they’re tricky to use by feel alone. We found ourselves checking the screen to make sure a button press had the desired effect. It’s a shame and the only build quality issue we discovered on what is otherwise a well-made phone.

The nano-SIM and microSD trays on the left edge feel more solid, are easy to access and stay closed thanks to a small rubber seal. 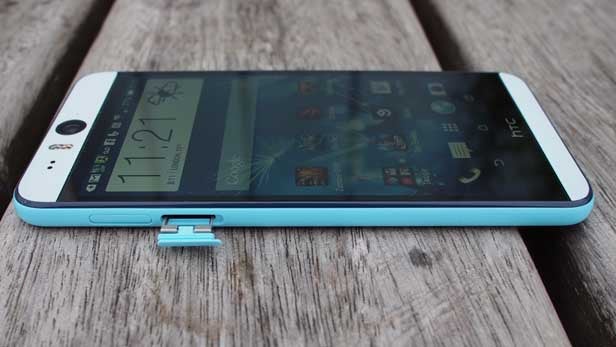 There’s a reason for these seals, and perhaps why the buttons are so vague. The HTC Desire EYE is water resistant for 30 minutes in up to 1m of the wet stuff, making this a phone you can enjoy with your rubber ducky come bath time.

HTC’s managed this without the annoying flaps found on the likes of the Samsung Galaxy S5 or Sony Xperia Z3. Both the microUSB and 3.5mm headphone jack are water resistant without needing a cover. It’s a much neater solution that we hope to see on more phones in the future. 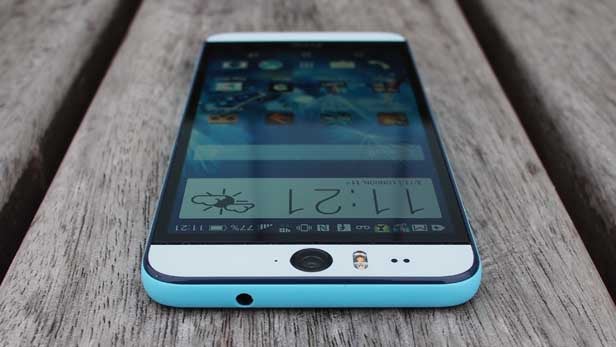 The 5.2-inch screen makes this a big phone, and HTC’s not done much to keep the dimensions down. Screen bezels are chunky all round, making this larger than the 5.5-inch LG G3 in all but thickness.

The Desire EYE is a handful to use and doesn’t come with any clever innovations to make life easier. The LG G3 has nifty rear buttons, while the iPhone 6 Plus drops what’s on the screen, when asked, to make it easier to use one-handed.

You’ll find yourself needing both hands to use the EYE more often than not. 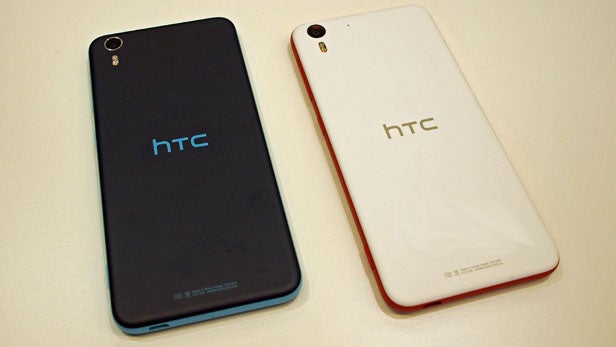 The Desire EYE is available in white, blue and red.

The 5.2-inch display on the Desire EYE is both bright and vibrant. It doesn’t have the pixel-packing prowess of the LG G3’s or Galaxy Note 4‘s QHD screen, but the 1080p resolution is sharp enough for all but the most observant pixel peepers. Text looks crisp and clear – the big screen is a pleasure to use for browsing the web or reading an eBook.

Top-level brightness is solid, too. In fact the HTC Desire EYE is a little brighter than the HTC One M8, making it a great phone to use outdoors on sunny days.

The IPS screen also impresses in terms of colour. Icons pop off the screen and video looks great. 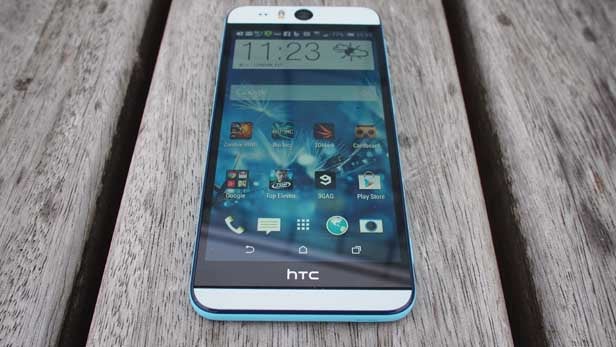 Viewing angles and contrast don’t quite match the levels of the best phones on the market. Colours shift when the screen is viewed at an angle. But these issues are minor. This phone has great multimedia potential, and that’s not just down to the screen.

HTC cares about the sound you can get from your phone and the Boomsound speakers on the Desire EYE are some of the best we’ve every tried. Cleverly hidden just above and below the screen, they provide solid stereo separation.

Peak levels are loud enough to enjoy with company, and the quality is better than speakers on more expensive phones such as the iPhone 6 or Galaxy S5. There’s very little distortion and plenty of detail to pick out.

With speakers this small you can’t expect too much low-end, but there’s enough bass to enjoy an action movie or your favourite TV series.

Next
Performance, Software and Connectivity Review