A chunky 3220mAh battery hides behind the non-removable back and powers that huge, high-resolution screen. That’s exactly the same size as the battery on the Galaxy Note 4, although the Samsung phone’s stamina is better.

In our standard test of playing a video on loop until the phone dies, we got just over 10 hours of continuous use. That’s almost an hour less than the lower-resolution iPhone 6 Plus managed and 2 hours less than the Galaxy Note 4.

That test isn’t real world, though – it just gives us a like-for-like comparison. But the test results are reflected in normal use. The Nexus 6 has solid staying power; it’s just not quite on the Galaxy Note 4’s level. 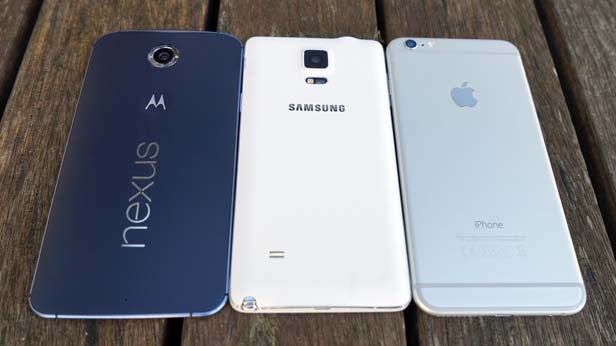 Using the Nexus 6 for an hour’s commute, and another couple of hours throughout the day, will leave you with between 55-60% battery life by the time you stroll out of work in the evening. Usage included 4G web browsing, a bash at gaming, playing music and watching Wi-Fi streaming video. In similar use the iPhone 6 Plus is on the 60-65% mark, while the Note 4 at around 70%. You can squeeze two days of use out of all these phones.

All three have outstanding stamina – a great deal more than you’ll get from the likes of the iPhone 6, Moto X or Nexus 5.

Motorola has taken advantage of the QuickCharge 2.0 feature on the Snapdragon 805 processor to make the Nexus 6 a speedy charger indeed. You can get 6 hours of use from a 15-minute blast, and it takes less than two hours to charge fully. That’s a little less than the iPhone 6 Plus, but around 10 minutes more than the Note 4, which uses the same QuickCharge tech, manages.

Should I buy the Nexus 6?

Can you handle the size? That’s the question. We just keep going back to the fact that this phone is just that bit bigger than other phablets. This makes it near impossible to use one-handed for any length of time or during a jostly commute.

If you want a phone with a large screen, we’d recommend either the iPhone 6 Plus or the Galaxy Note 4. The Note 4 will have Android 5.0 Lollipop soon, has greater battery life, a better camera, the same screen resolution and comes with the added bonus of the S Pen. It’s better all round.

That’s not to say the Nexus 6 is a bad phone – far from it. At £500 SIM-free it’s most certainly high-end, but still more than £100 cheaper than its most direct rivals, which it closely matches in most respects.

There are also some cheaper phones that deserve serious consideration. The Huawei Ascend Mate 7 has a 6-inch screen and offers many of the same benefits as the Nexus 6, albeit in a less desirable package, for just £400. Then there’s the Nexus 6’s step-brother, the Moto X. It looks almost identical but comes with a much more manageable 5.2-inch screen and costs £100 less. Oh and don’t forget the 5.5-inch LG G3, Phone of the Year in the TrustedReviews Awards 2014. The list goes on.

Google and Motorola have attempted to move from the low-cost Nexus phones made by LG to something more premium. They succeeded, but haven’t gone far enough to play with the big boys in a competitive phablet market. The Nexus is a good phone that’s trapped in limbo. It’s too big and too expensive for most people to want, and doesn’t match the premium devices from Samsung and Apple. Just like the Nexus 9 tablet then…