Update 17/06/2015: It’s over a year since the Surface Pro 3 came out, so how does it look now? More or less the same. It’s still an outstanding hybrid and there isn’t a product in its class that surpasses it. That’s partly because the Surface Pro 3 is so unique, but it’s no less true. Its outstanding performance and unique design make it a stand out product.

One caveat is the cheaper alternative, which is Microsoft’s own Surface 3. If you like the idea of the Pro but can’t justify the cost, the Surface 3 offers a similar design and features in a smaller, more portable design. It’s nothing like as fast, so it’s only suitable for basic computing, but it’s a great product.

But if you are planning on the buying the Surface Pro 3, it might be worth waiting to see if Microsoft updates it soon. Windows 10 is just around the corner and now would be the perfect time for Microsoft to upgrade it. Whether you wait or not, though, the Pro 3 remains an outstanding hybrid that’s great for highly mobile professionals.

What is the Surface Pro 3?

Microsoft calls it “the tablet that can replace your laptop”. That’s can, not will. If you need a laptop, you should probably still buy a laptop. If you want an iPad, you should go buy a damn iPad Air. It’s not a straight replacement for either. It’s something more. Something different.

What it is a very talented hybrid. The most talented. It’s as adept at watching Netflix in bed as it is working on-site and on the move. It’s a complete PC, but it’s not a PC 100% of the time. It’s a graphics tablet and a digital notepad. It’s the tool you’ll never leave at home or at work, because it’s essential to both. Microsoft has taken three swings to strike a proper hit, but the Microsoft Surface Pro 3 is one. Read on to find out why.

The basic Surface Pro concept remains the same. It still has a built-in kickstand, a keyboard cover (optional but essential) and a pressure sensitive stylus. But it’s also the first serious redesign of the Surface Pro since the original and Microsoft has made all the right moves. Previous Surface Pros felt simultaneously too small and too large. Too wide and too tall to work as a tablet; too small to replace a laptop. A switch from the 10.6-inch, 16:9 aspect of previous models to a 3:2 aspect 12-inch screen solves this problem.

This underplays the difference, actually. It transforms the Surface Pro 3. It’s intimidating at first, but the 12-inch screen gives you ample room in which to work and it feels comfortable in any aspect. And while videos have black bars where once there were none, the screen is so large it’s still better for them too. 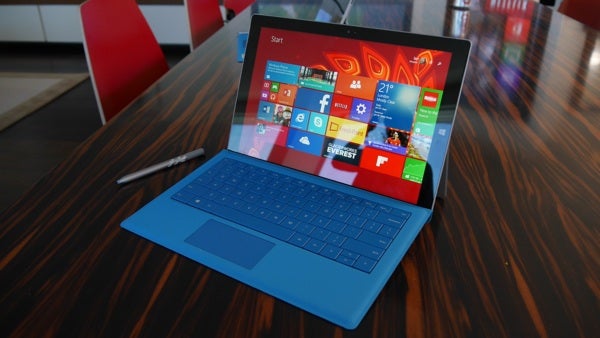 It helps that Microsoft has worked hard to keep the Surface Pro 3 thin and light. At 800g (before you add the keyboard) it’s not light in tablet terms, but it’s lighter than any laptop in this class. It’s 107g less than the Surface Pro 2, too. Even with the keyboard attached it weighs just 1.08kg. That’s the same as the 11-inch MacBook Air and 300g less than the 13-inch MacBook Air.

What’s more impressive is it’s just 9.1mm thick. That’s thinner than the first, pre-iPad Air retina iPads and with proper PC components inside. That’s incredible. Indeed, everything about the industrial design and build quality of the Surface Pro 3 is staggering. From the textured metal rear to the chiselled edges and discreet air vents, the Surface Pro 3 oozes quality.

In fact, the only substantial criticism is the redesigned charger connection falls out too easily. It’s better than the old one, which had the same problem and left unsightly scratches, but it still needs a little work. 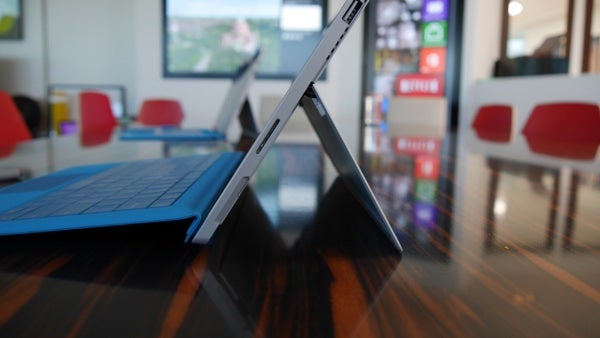 Nothing demonstrates the build quality better than the new kickstand. Where there was once just one position, then two, you can now set the Surface Pro 3 to any angle between upright and a near flat one. This is remarkable enough in isolation, but the the smoothness and sturdiness of the hinge is astounding. Whomever was responsible for its design should receive a prize for awesomeness.

The result is it’s never a problem to find an angle that’s comfortable. Moreover, the extra flat angle is ideal for small tray tables as you can lay it flat and use the on-screen keyboard to type on. So large is it on this screen, it’s a decent makeshift typing experience. 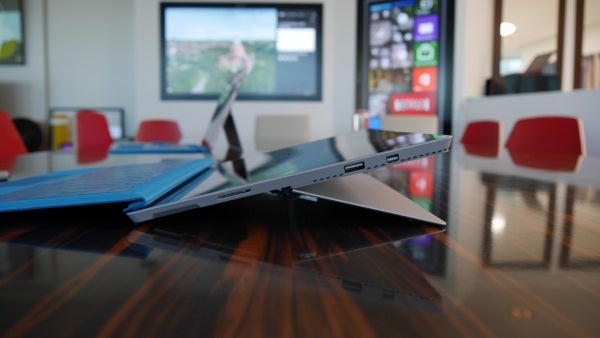 This does belie the Surface Pro 3’s principle weakness, though: it doesn’t fit where laptops do. It’s near impossible to use the keyboard and kickstand in most commuter settings. There’s not enough space. Indeed, on planes there’s no where for the kickstand to stand as there’s a gap between tray table and the seat in front.

This is one reason why the Surface Pro 3 can’t replace a laptop for everyone. The other is it still feels awkward to use on your lap. Microsoft is so keen to persuade us otherwise it coined a phrase for the problem: lapability. The argument goes this is the most ‘lappable’ Surface Pro yet, but it’s an unconvincing argument. It sort of kind of works if you try, but deep down you know it doesn’t feel right. 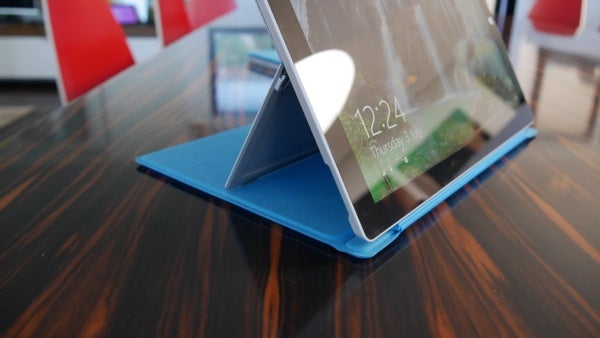 What it lacks for here it makes up for in versatility in other ways. Anyone who works on their feet all day will appreciate the large touchscreen and accurate stylus. The tablet format, meanwhile, brings the benefits of Windows 8.1 to the fore better than any other Windows device. And when you’re done working on location or back from a meeting you can plug it straight into a monitor and carry on where you left off.

It’s also worth stressing it’s a fine laptop replacement in any other setting. Set it down on your desk and the large screen invites you to work, and the keyboard (more on which later) is excellent. The keyboard also has the neat trick of clipping magnetically to the front edge, creating a comfy ‘wedge’ angle for typing.