The HTC One M8 has solid battery life and the One M9 should, logically, better it. Qualcomm claims the big.LITTLE Snapdragon 810 is more energy efficient than the 801 on the M8 and the One M9 also comes with a larger battery – 2,840mAh vs 2,600mAh.

With those specs, and using what is essentially the same screen, you’d bet money that the One M9 would significantly outlast its predecessor. But in both our general day-to-day tests and video playback benchmark they came out on almost equal footing.

Let’s start with our video test where we play a standard definition video at around 50% brightness until the battery runs out. Here the HTC One M9 managed 10 hours – just a few minutes more than the M8 but less than the Galaxy S5 or iPhone 6 Plus. This plays out in the GeekBench 3 battery test where the M9 scores 2,072 (3 hours 43 minutes), the S5 a 2,731 (4 hours 43 minutes) and the iPhone 6 Plus a whopping 3,155 (5 hours 15 minutes). This test hammers the processor and with power saver on the One M9 kept going and going. We got bored when it passed the 5 hour mark and the battery was still at 50%. All this points to the big quad-core processor being a bit of a power hog.

More typical use also showed the the One M9’s battery life is good, but not outstanding. A day of heavy use including an hour of satellite navigation, three hours of browsing the web (3G and 4G), an hour of video and two hours of 3D gaming (among some other general use) drained the battery to 0% in 13 hours. 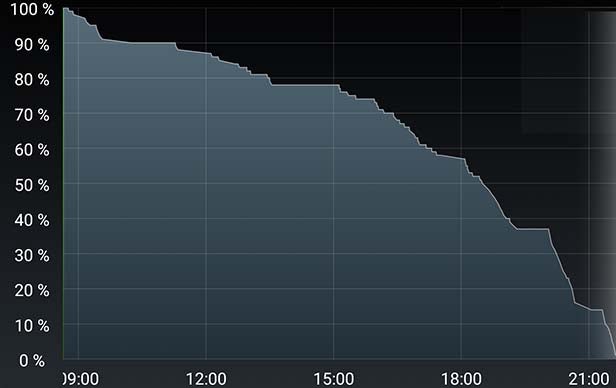 That was a very heavy day’s use, however. Using the One M9 normally you will be left with around 50% battery life by bedtime. If you don’t play many 3D games you can choose to keep the power saver setting on all the time. This impacts performance, as we saw earlier, but not in any significant way and you will extend your battery life by some margin. In fact you may not notice any problems playing games either.

If you’re really struggling for power and you need to make the M9 last then there’s the option of Extreme Power Saving mode. This cripples the functionality of the phone to the core basics – texts and calls.

Like most flagship phones these days the HTC One M9 does not come with a removable battery. That means if you need power on the go your best bet is to carry a battery pack with you.

One battery boon the One M9 does come with, like the Galaxy S6, is fast battery charging. HTC claims this gives you 60% of your battery from just a 30-minute charging blast. In our test we managed 30% from half an hour charge. You need a special cable to take advantage of fast charging and, annoyingly, this isn’t included in the box. It takes the M9 one and a half hours to recharge fully suing the standard, supplied, cable – that’s almost half an hour faster than the iPhone 6.

The HTC One M9 just about outlasts its predecessor, especially when using power saving mode, and certainly outlasts the iPhone 6, but not the Galaxy S5 or iPhone 6 Plus. If battery life is a key factor in deciding which smartphone to buy then you won’t be too disappointed by the M9, but there are a couple of other phones that will go for a little bit longer.

Active noise cancellation using a dedicated mic ensures call quality using the HTC One M9 is crisp and clear. We tested it on a noisy train and windy London streets and the recordings were excellent. Background noise can be heard, but it didn’t interfere with hearing what is being said at all. 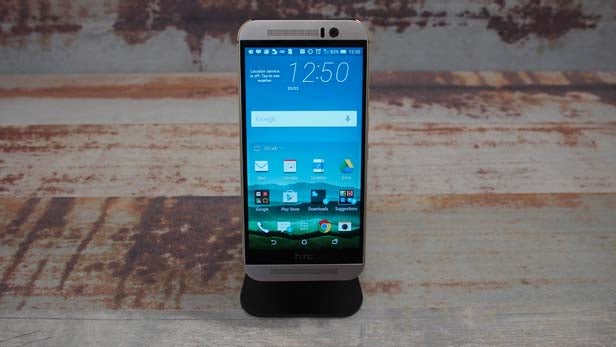 Should I buy the HTC One M9?

At £580/$859 (or £37.50 a month with no upfront cost on a 24-month contract from Carphone Warehouse) the HTC One M9 comes at a premium. If you’re looking for a flagship phone, however, then it’s not priced badly, especially when you consider that adding extra storage via microSD is cheap.

If you’re after an upgrade from your original HTC One or HTC One M8 then the M9 won’t disappoint you. The rear camera isn’t perfect but it is better than the camera on it’s predecessors, and you get the added benefit of having the M8’s rear camera on the front.

If you’re picking between the M9 and other, current flagships then there’s a few things you should consider. It has better battery life and front-facing camera than the iPhone 6 and is just as well made. How it will quite stack up to the more expensive Galaxy S6 and S6 Edge, due out soon, remains to be seen – you may want to wait too.

There are a few other options worthy of consideration, though. Last year’s TrustedReviews Award-winning LG G3 has a better camera and can now be bought for around half the price of the One M9 – although HTC’s software and build-quality are superior. Then there’s the excellent Samsung Galaxy Note 4 – a fantastic and well-made phone that can be found for £500/$800. It should be noted that neither of these options is as compact as the One M9.

HTC has undoubtedly produced yet another great handset for its One range. The HTC One M9 is let down slightly by an inconsistent camera and some software grumbles, but this is still a solid all-round flagship.