Now down to the cameras, an area HTC has never got quite right on its One range. Has it got it right on the One M9? Not quite – results are too inconsistent – but they’re still better than ever before.

The M9’s camera has a 20.7-megapixel sensor, which sounds great in
principle – the iPhone 6 only has 8. Megapixels aren’t the be all and end all of a camera, though.
Far from it. One disappointing aspect of the One M9 camera’s specs is that
there’s no optical image stabilisation. This helps low-light photography
and comes as standard on the iPhone 6 Plus, Nexus 6 and upcoming Galaxy
S6.

But first let’s have a look at the camera app, which is busting to the brim with features. It comes with the usual front, rear and panorama settings, but you also get photo booth, split capture and Bokeh. Photo booth and split capture are simple. The first takes four pictures in quick succession and creates a grid, while split camera takes a picture with the front and rear camera at the same time (or with a short delay if you want to set a selfie up).

Bokeh – the photographic effect where an object is in focus and the background is out of focus – is more interesting. It attempts to emulate the HTC One M8’s shallow-depth-of-field-effect Duo camera, but using software alone. Let’s see how well it works. 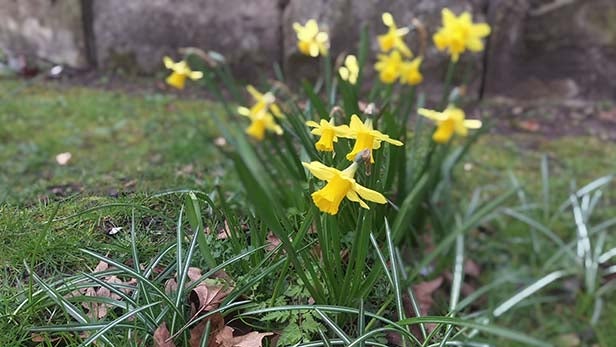 As you can see from the above image the daffodil is in focus while objects behind it or to the side are slightly blurred. This should be a gradual effect, however in this photo it’s rather jarring – one moment it’s in focus and the next it’s out of focus. You also have to be within 60cm of the object you want to apply the effect and it takes 5 seconds to process the image. All in all this is one setting best avoided.

There’s a few other tweaks that the camera app lets you apply to photos. The fx Editor comes with the usual host of filters and frames, effects and touch ups so you can give yourself those killer cheekbones you’ve always craved.

Then there’s Double Exposure that lets you blend two photos together, while Elements adds movement to your photos like leaves falling from trees or bubbles being blown around. Finally, HTC Zoe creates fun little videos from a selection of photos.

All these features are great to have but are only as good as the camera that takes the photo in the first place. Let’s dive into the HTC One M9’s camera performance and how it compares to its rivals.

Our first comparison shot is of a stone statue. You’d expect the One M9 to show more detail than both the lower megapixel Galaxy S5 and iPhone 6 Plus. In reality, however, detail is limited with objects in the background appearing soft and fuzzy. The stone head doesn’t pop with the same colours of its competitors either.

Exposure metering seems to be one of the core issues. Sources of light cause the HTC One M9 to struggle with balancing brightness leading to a loss of detail and dark surroundings. We took several challenging photos of the sunny river Thames. Without changing any settings each photo came out quite different – lack of consistency is one of the biggest problems of the One M9’s rear camera.

HTC One M9 on the left, Galaxy S5 on the right

The HTC One M9’s rear camera doesn’t excel in low-light either. It’s a little better than the Galaxy S5 but not on par with the iPhone 6 Plus and the helping hand it gets from optical image stabilisation.

The HTC One M9 camera struggles in low-light too

When it all goes right, though, photos can look fantastic. A vibrant shot of a flowery piano below brought out the best in the One M9’s camera. In terms of colour accuracy the M9 outshone its main rivals although some of the detail was crushed compared to the S5. 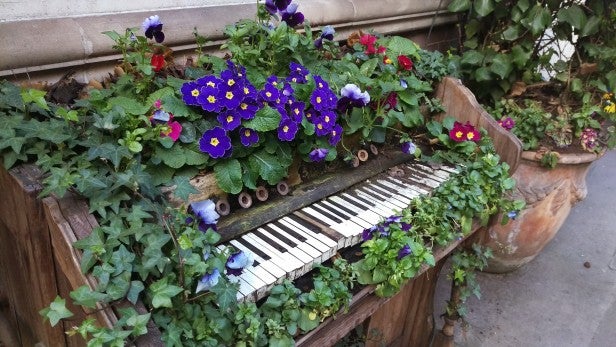 HDR mode also works well and improves the colour and light balance of a
photo. Like the Bokeh effect this takes longer than we’d like to process
– around two seconds. 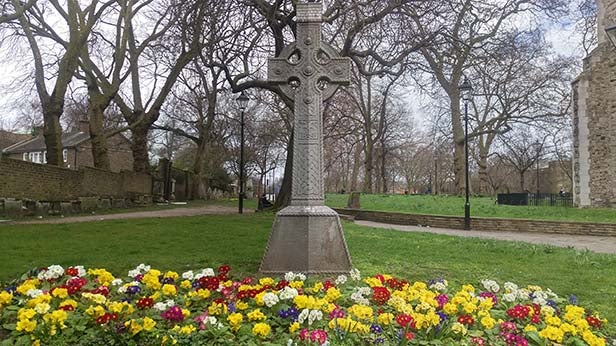 Still, over the course of several dozen comparative shots, we’d take the Galaxy S5’s rear camera over the one on the HTC One M9. That phone is a year old now and experience tells us that the Galaxy S6 should be even better. HTC hasn’t done quite enough to catch up to the competition here, but neither are the flaws in its camera fatal.

If you liked the 4-megapixel Ultrapixel camera on the rear of the HTC
One M8 you’ll be pleased to know that it makes an appearance on the One
M9, but this time it’s on the front. It makes a lot more sense to have
this type of camera for selfie – they’re often taken in the dingy-light
conditions of bars and restaurants.

When it comes to front facing cameras the One M9 does a much better job
than both the Galaxy S5 and iPhone 6 Plus. If you take more selfies than
landscape shots you’ll love this camera.

The HTC One M9 can shoot 4K video – up to six minutes of it. It also has a 120fps slow-motion mode. Video quality is adequate, but suffers from the same issues we’d experienced with the camera, namely iffy exposure metering.