Google’s latest mobile operating system, Android Lollipop, graces the One M9, but it is customised via HTC Sense 7.

HTC’s Android layer is one of the least offensive around, in fact we’d go as far to say that we rather like it. That’s because it’s simple to use and doesn’t seem to impact the M9’s performance much at all, although we did experience some usability issues. These might have more to do with Android Lollipop, which still has a few kinks that need ironing out. For example, we found that, on occasion, we couldn’t swipe down to access the notification centre or quick settings. A restart resolved the issue, but it was annoying nonetheless.

A more fundamental problem was an issue that occurred about once a day where the phone would lose network signal entirely. This isn’t something that’s isolated to the One M9 – we’ve experienced the same on the iPhone 6, Galaxy S5 and HTC One M8 – but on other phones popping in and out of Airplane Mode would resolve the issue. Not so on the M9. Once again a restart was required.

These are all issues that we expect to be fixed with software updates. Let’s take a closer look at the new features Sense 7 brings to the HTC One M9. 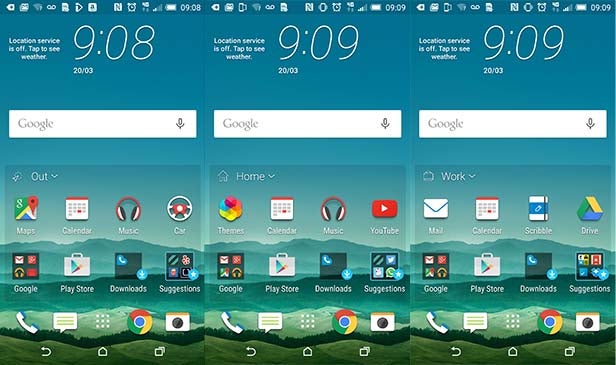 Sense 7: Sense Home
The best new feature on Sense 7 is Sense Home. When we first heard about it we thought it could be more of an irritant than a help. Why would you want the core apps you keep on your homepage changing? Your homepage is your bastion – a place you put all your most important apps. In practice, though, Sense Home works brilliantly.

The Home widget adapts the eight main apps (or app folders) on your homescreen depending on where you are. At home? You’ll might want the Remote app, Netflix and Spotify front and centre, while when you’re at work the calendar and email may be more useful. The third location is simply called Out and promotes Google Maps and other helpful travel apps.

Home learns your habits and rearranges the apps appropriately, although you can also pin apps you find vital. What makes it particularly helpful are two app folders that provide homepage access to your last downloaded apps and app suggestions for your location. Forget hunting through pages of apps or using search – HTC’s Sense Home is a mind-reader that surfaces what you need when you need it. 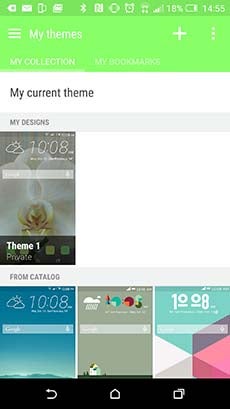 Sense 7: Themes
Theme’s lets you customise the M9 from the lock screen all the way to the fonts. A few themes are preloaded, while others can be downloaded. Where it gets interesting is that any picture can be used to construct a theme. Have a favourite photo you want to use as a lock screen? Themes analyses it and picks appropriate colours, icons and fonts to create a look that spans the whole phone.

It does a great job of picking appropriate colours, but some of the icon styles miss the mark. Several are so abstract that you’re left scratching your head whether you’re about to open the camera app or send an email, while other’s crop third-party icons, like Chrome or Facebook so they look wrong. Still, it’s a slick process to create a theme and tinkering with it to get acceptable results is just as simple. If you love customising your phone then HTC has made it dead easy.

Sense 7: Cloudex
Cloudex is a new app that comes with Sense 7 on the HTC One M9. It aggregates photos you’ve stored online on Google Drive, Dropbox, Facebook or Flickr and creates a thumbnail gallery for you.

Sense 7: HTC Connect Three Finger Swipe
HTC Connect lets you easily throw content to DLNA compatible devices using a three fingered swipe up on the screen. We’ve seen it working during a demonstration but try as we might we couldn’t get the One M9 to see our Raumfeld One S wireless speaker or Chromecast.

There are a number of other apps that make a return on the HTC One M9. They’re oldies but goodies. 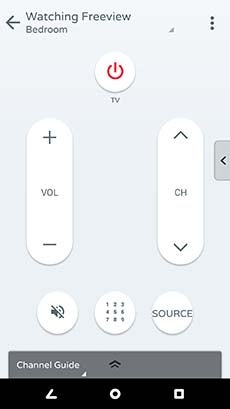 Peel Smart Remote
This smart remote app is one of the best around and makes the HTC One M9 a powerful smart remote that lets you control everything from a TV to your sound system and set-top box using the infrared blaster on the top of the phone. It includes channel guides so you can easily plan your viewing.

Kid Mode
As the name suggests, Kid Mode (made by Zoodles) lets you lock your phone down for young children to use. You can select apps that can only be used within the simple Kid Mode interface, while there are plenty of child-friendly videos and games included to keep young’uns occupied.

HTC Music App
As well as the Google Play Music app you also get HTC’s own Music App. This isn’t a case of overkill – Google’s app has become all about buying into its streaming service, whereas HTC’s lets you listen to music stored locally on your phone or on media servers like your home PC.

Unlike Apple and, surprisingly, Samsung and its Galaxy S6, HTC has stuck to its guns and provided a microSD card slot to complement the 32GB of onboard storage. It’s a great feature to have if you enjoy travelling with lots of movies or music. If you do like using the cloud then the One M9 also comes with 100GB of free Google Drive storage for two years.

Aside from that you get the usual dual-band Wi-Fi (802.11 a/b/g/n/ac) with Wi-Fi Direct and DLNA support, MHL 3.0 for connecting to a TV via cable, and 4G. You also get the newest Bluetooth 4.1 standard for low-power pairing with other devices like Bluetooth speakers. We’ve already mentioned the included IR blaster that lets you control your TV, but there’s also a radio that can be used when you plug in the in-ear headphones that come in the box.