While not a huge upgrade over the original in terms of picture or sound, the Hisense R50A7200GTUK Roku TV maintains its fantastic budget performance. With enjoyable picture quality, lots of streaming features and free content, this is an affordable TV with a wide appeal.

When the the first Roku TV in the form of the Hisense Roku B7120UK arrived, it instantly marked itself out as one of the best cheap TVs on the market.

The Hisense and Roku combo returns in the Hisense R50A7200GTUK Roku TV, adding new features while maintaining its affordable price for even more value-tastic appeal.

They say lightning doesn’t strike twice in the same place but – allow us to mix our metaphors – Hisense and Roku look to have struck gold again with the A7200G.

This Roku TV is exclusive to the UK and can be bought from Argos.

It’s a case of déjà vu with the Hisense R50A7200GTUK Roku TV’s design. The chassis is almost identical, so build quality is rather plastic – not surprising for a cheap TV.

At 9.8kg, it’s slightly heavier and measures at 1116 x 648 x 82mm (without the stand) – so again, very similar. Feet are stationed out wide, and assembly means slotting them in and tightening the screws. Getting to the TV’s start menu takes minutes once the TV has been registered. 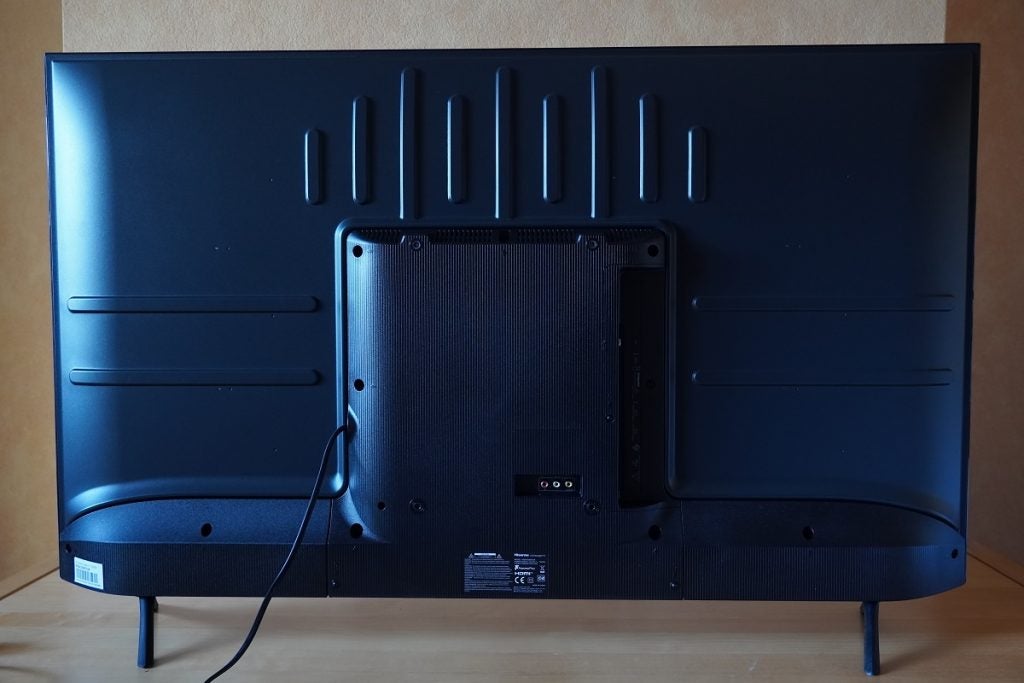 Roku says the bezel has been slimmed and rounded; it’s neater in appearance than the original, from what I can remember. It allows for a little more real estate for the on-screen images, and presents a less obtrusive design than before.

The remote is the same as packaged with the B7120UK. It still feels plasticky and lightweight, but the basics are covered with buttons for Netflix, Spotify and for those Google Play Movies (RIP) and Rakuten TV fans. There’s a Freeview Play hotkey, navigation buttons but – surprisingly, given the Streambar remote featured it – no voice button. 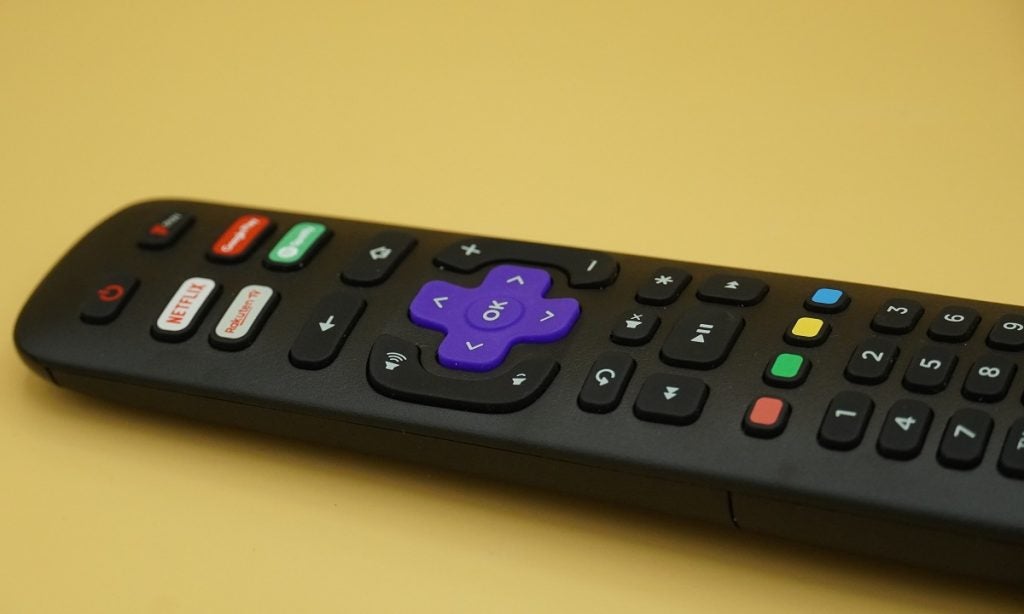 I’ve appreciated Roku’s platform agnostic sensibilities, and it’s good to see the feature list expand with the Hisense Roku A7200G. There’s wide app support – Netflix, Prime Video, BT Sport, Disney+, Apple TV – with Freeview Play bringing the catch-up and on-demand UK apps. There are many more besides, and it’s a strength that puts Roku TVs ahead of other competing budget sets (even Hisense’s own models). 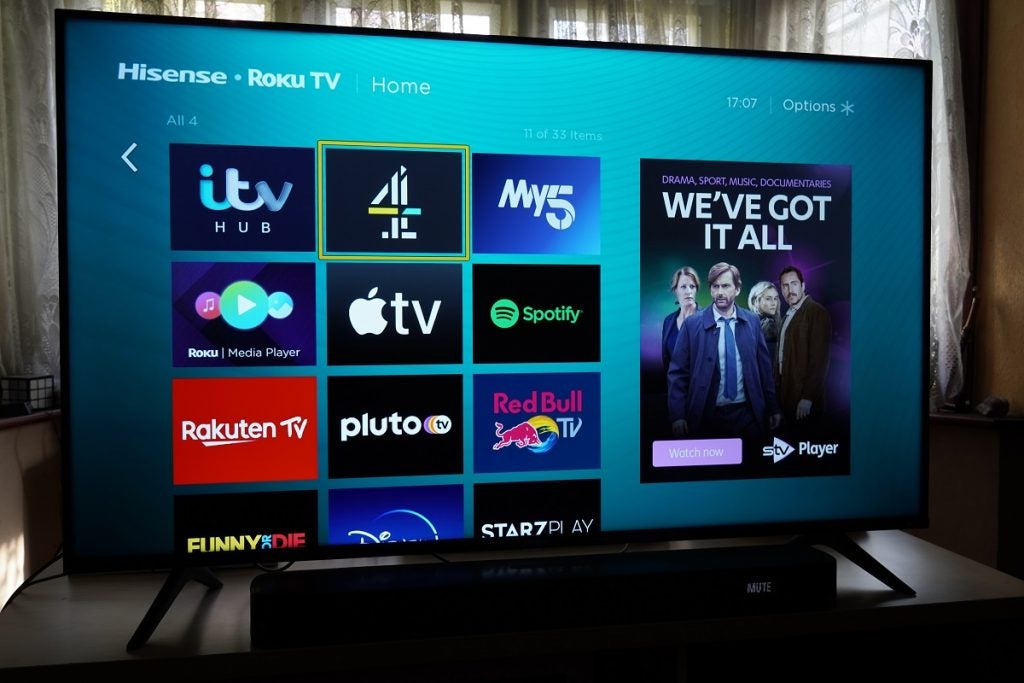 There’s still no Chromecast or Bluetooth, but a substitute for the former is screen mirroring from a mobile device, or the Discover and Launch protocol for Netflix and YouTube. Alexa and Google voice assistants aren’t built in, but are supported via connected devices.

Apple AirPlay 2 and HomeKit support arrived on the Roku OS in 2020 – the former enabling streaming from iOS devices, while the latter offers control over smart devices within the Apple ecosystem. These additions help widen the breadth of the Roku TV platform, looking outwards rather than in. Inclusion, like in other walks of life, can only be a good thing in this respect.

The Roku interface continues to be one of the most savvy and accessible platforms I’ve used. It lacks the flashy identity of LG’s webOS and Samsung’s Tizen-based Eden, but it’s clearly laid out and easily navigable via its menus: Home, My Feed, Freeview Play, Search, Streaming channels and Settings. 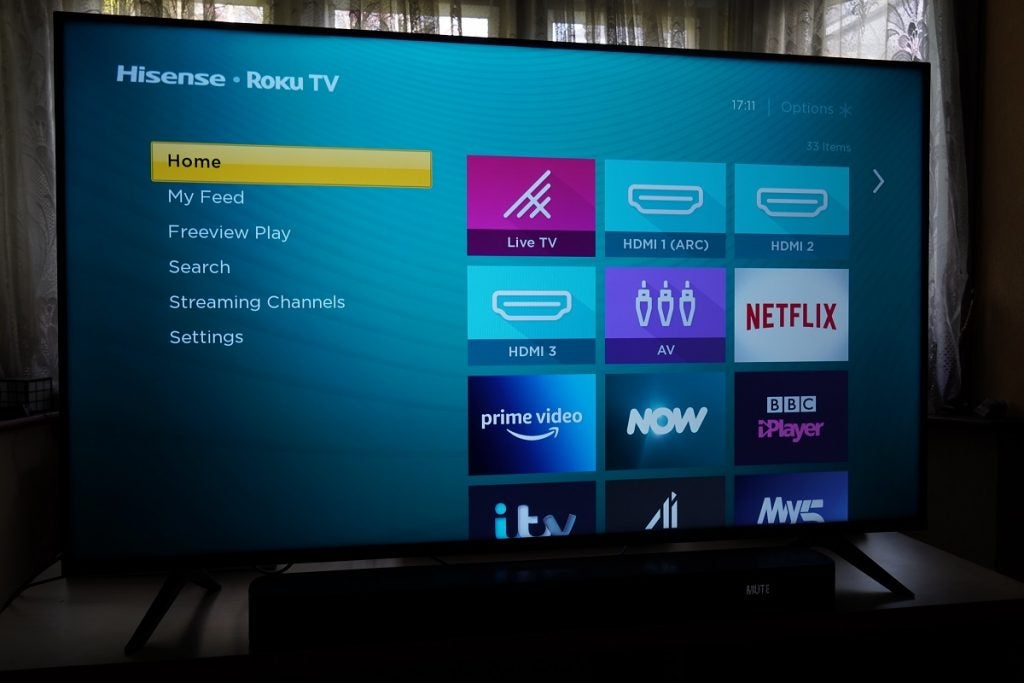 In My Feed, films and TV shows can be tracked, sending alerts when they pop up on streaming services. Streaming Channels is home to the Roku Channel that offers oodles of free content – some good, some not so good – but there are decent films (Zulu, Halloween, Camp X-Ray), TV series/reality shows (lots of Gordon Ramsay) as well as content to keep the kids happy. The Roku Channel will also be the home of the short-lived, short-form video service Quibi, sometime in 2021. 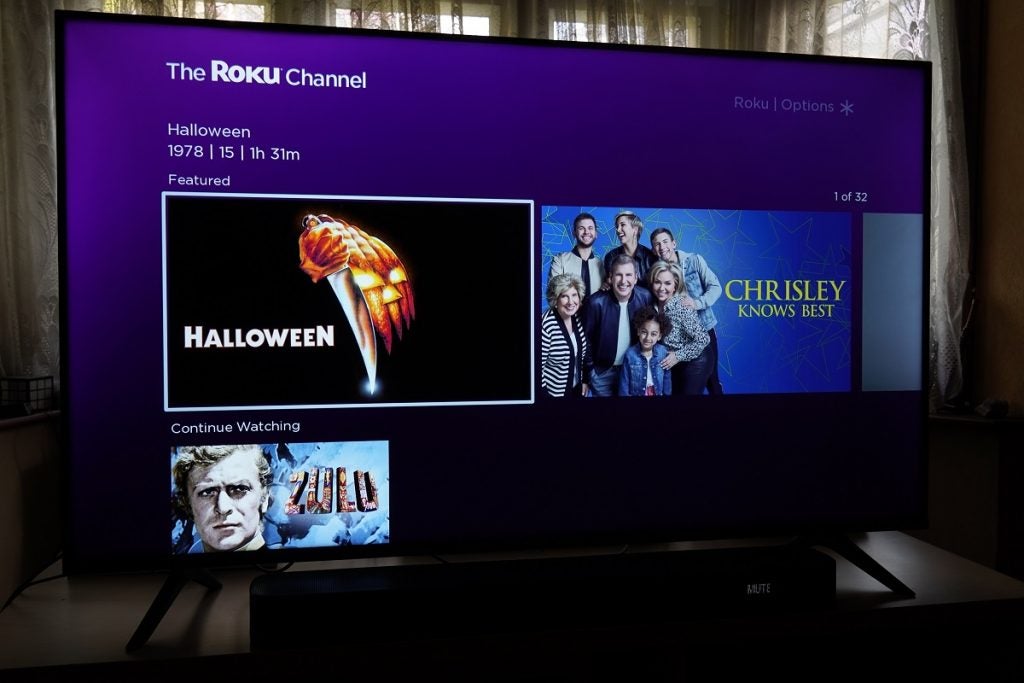 Accessibility options cover language selection, subtitles, hard-of-hearing settings and audio description. There’s no zoom function (no, not that one) – the fonts used are with accessibility in mind – and Roku has told me it’s working with Digital UK to enable the Accessibility Guide on Freeview Channel 555.

There’s little change in terms of physical connections: 3 x HDMI 2.0, a CI 1.4 slot, 3.5mm jack for headphones, DVB-T2/T UK tuner, AV composite video input, USB, digital optical out and LAN. HDMI ARC provides audio passthrough to a connected device, and although Roku has informed me that you can operate other connected devices, all I could control with the remote was the soundbar. Perhaps I’ve missed something there. 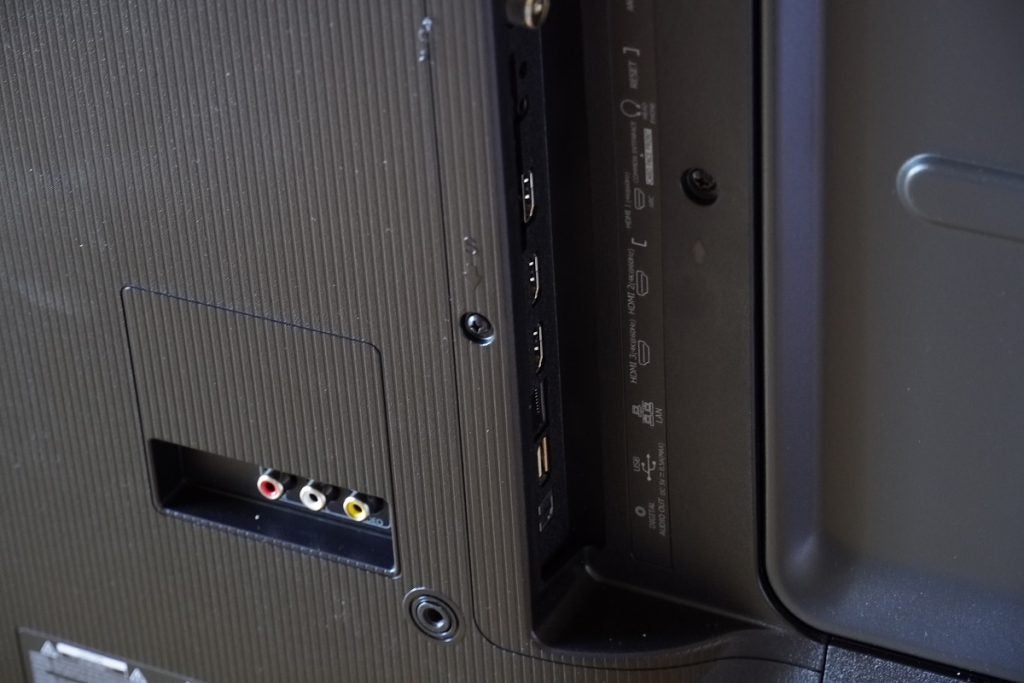 A Game mode is included and needs to be manually switched on. With it on, latency falls to an impressive 11.8ms – great for fast-twitch or racing games that require smooth inputs. 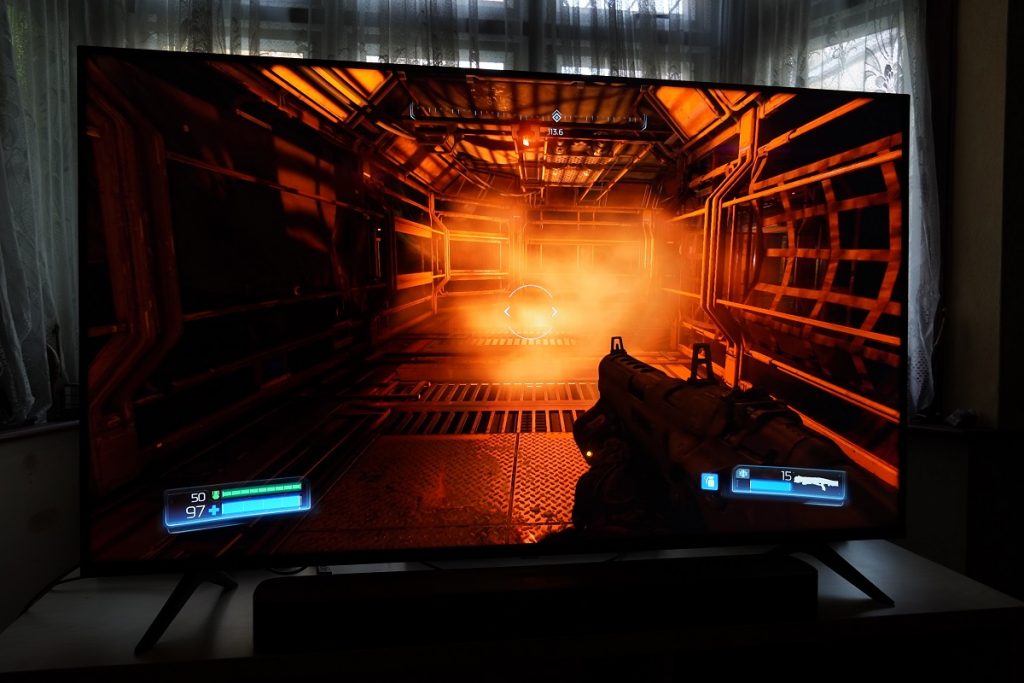 The B7120UK offered an enjoyable performance, although it had a few weak spots in my estimation – namely HDR brightness and SD upscaling. Little seems to have been changed in that respect, but that’s no bad thing. The Hisense R50A7200GTUK Roku TV remains an impressive performer for the price.

In terms of upscaling, the A7200G’s upscaling powers flit between very good and so-so. The problem seems to be an inconsistency with standard definition SDR content, as the Hisense A7200G Roku TV struggles with the varying quality it is served with. In general, SD content lacks sharpness, detail and clarity, but some programmes are handled much better than others. 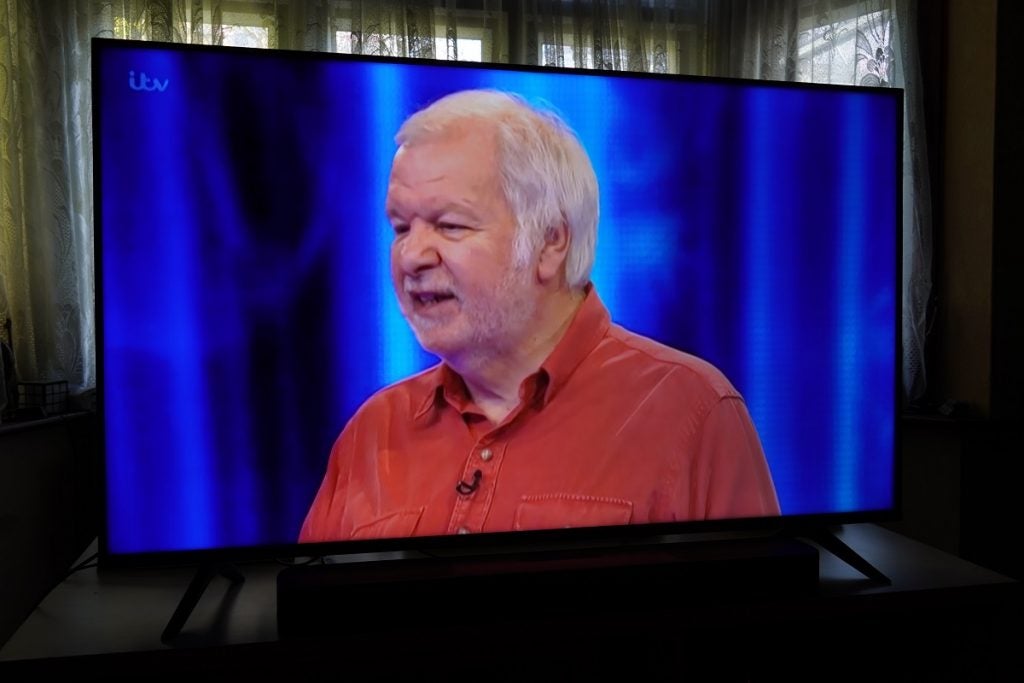 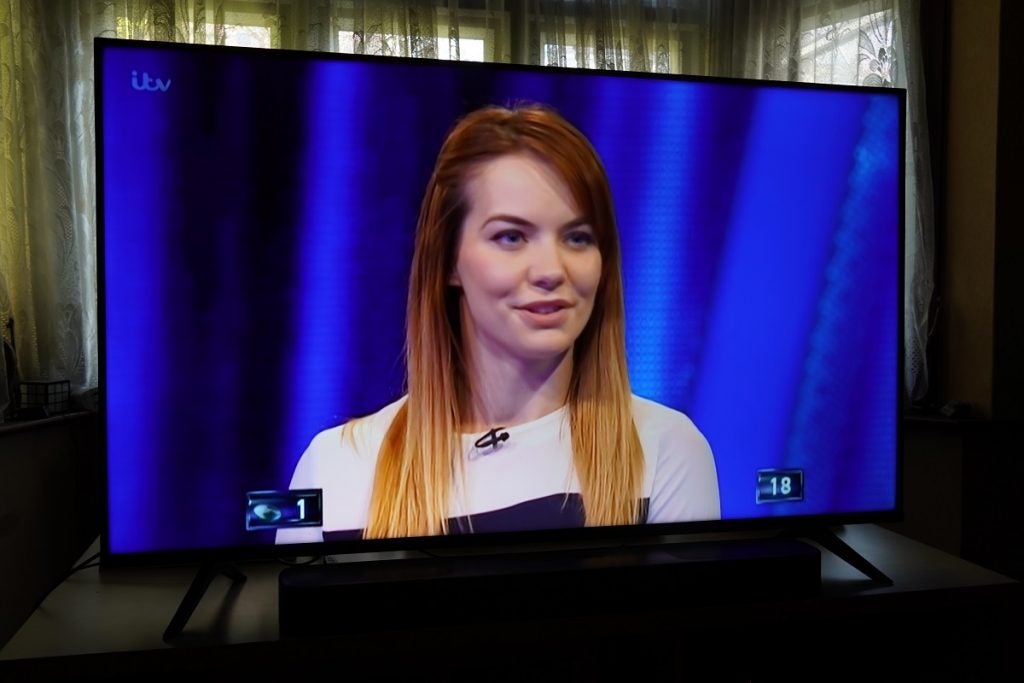 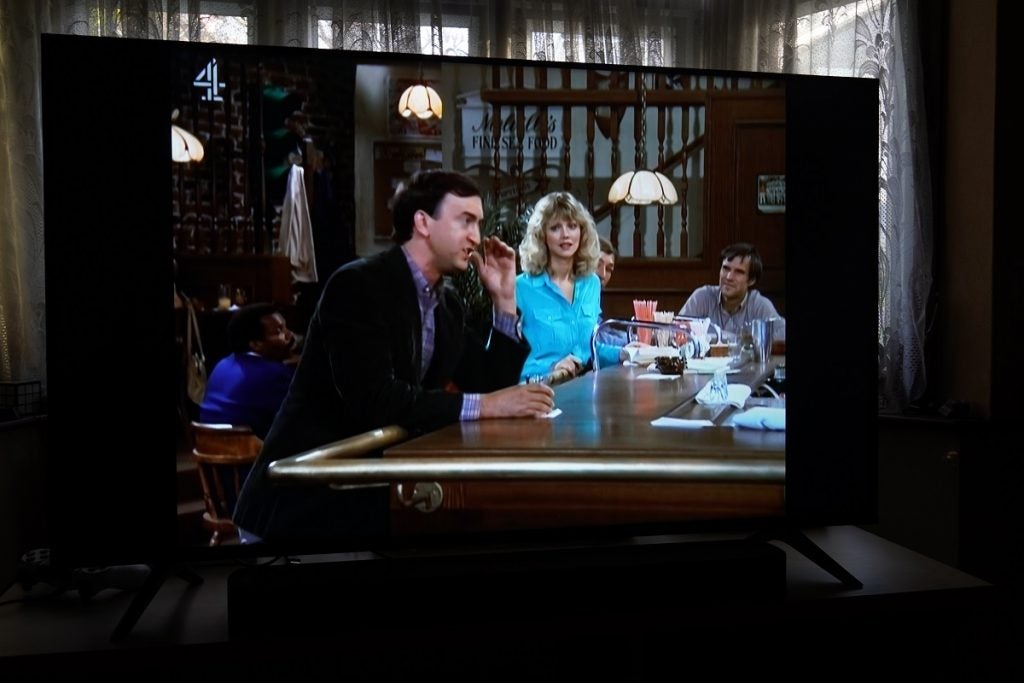 Look at the SD and HD comparisons of The Tipping Point quiz show on ITV, and the difference in terms of colours, detail (or lack thereof), skin tones and sharpness is stark. Faces are softer and colours are off – the red of the shirt is a completely different shade. Cheers on Channel 4 is more consistent, so it seems to depend on the quality of the broadcast; the A7200G’s upscaler struggles to bridge that gap in a uniform way.

HD sources are managed with more finesse. There’s better definition to textures and faces, finer levels of sharpness, and colours are depicted with more volume, clarity and in a pleasingly natural way – not a trait I normally associate with Hisense’s more saturated output.

Watching a Blu-ray of The Favourite, colours looked spot on – nuanced and lifelike in appearance – and the detail brought out in the period costuming and production design was consistently good. Skin tones are natural, images colourful with fine detail, impressive showing and good levels of clarity – at times I forgot it was a 1080p signal. 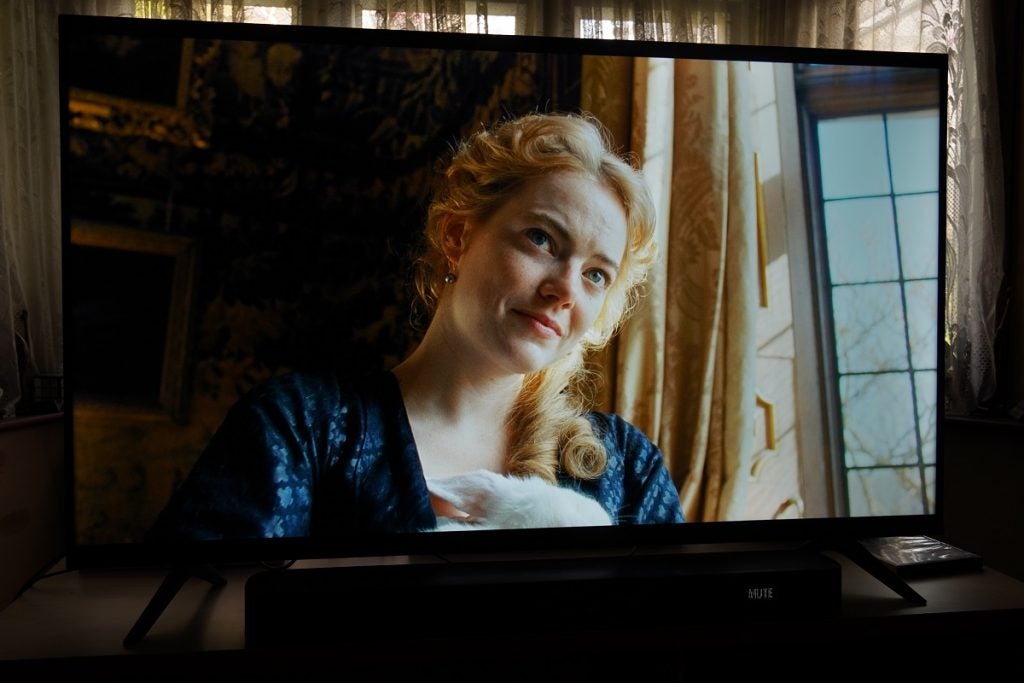 Detail again impresses in a film such as Knives Out (4K Blu-ray). The close-ups of faces are revealing in terms of fine detail and, again, the Hisense 50A7200GTUK Roku TV pleases in terms of colour accuracy, too, taking a natural, balanced approach. Streaming Ted Lasso over both AirPlay 2 (via an iPad) and the Apple TV app, and the slick look of the series is carried over, with quality consistent between the two. 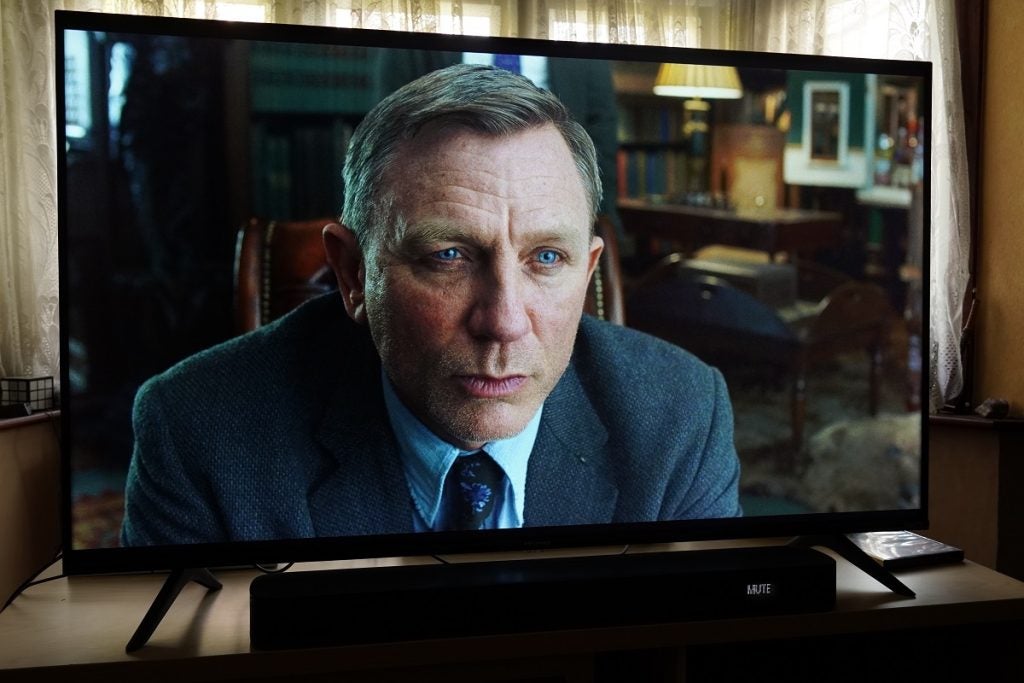 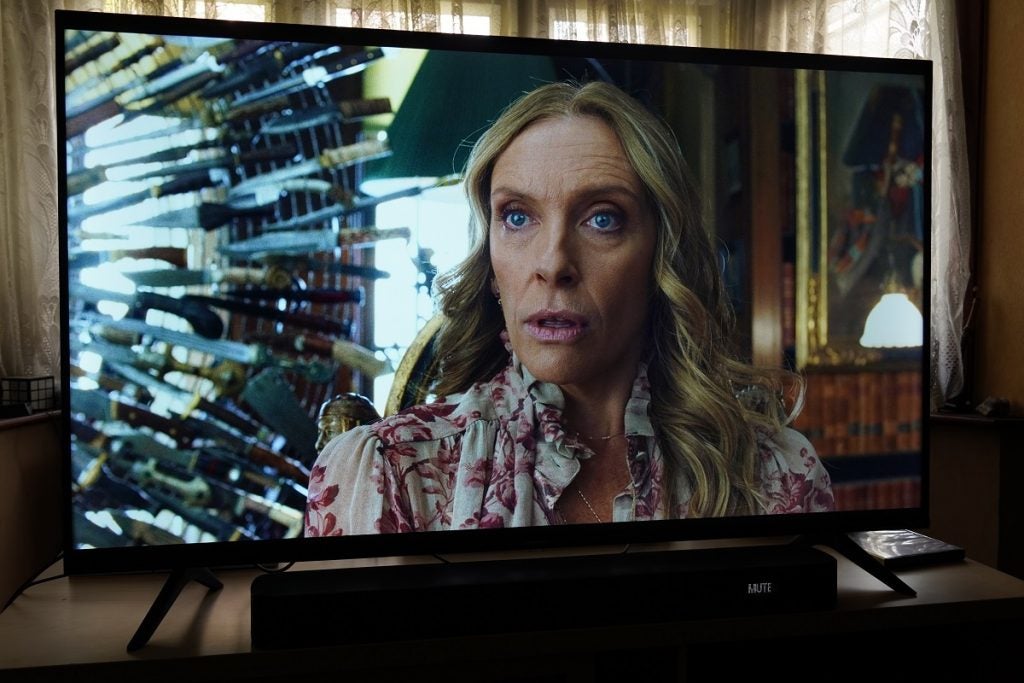 HDR support covers HDR10 and HLG, and with around 300 nits of brightness there isn’t much for the TV to seize upon: there’s little discernible difference switching between Normal, Bright and Dark (Cinema) HDR modes. You’ll want to jump into the picture settings and put the TV into its brightest mode. More advanced settings are tucked away in the Roku app.

The 4K Blu-ray of Once Upon A Time… in Hollywood produces a sense of naturalism with skin tones that are both varied and well conveyed. Brad Pitt’s complexion isn’t as ruddy as I remember it on the B7120UK. In fact, the A7200G’s images strike me as less punchy overall. 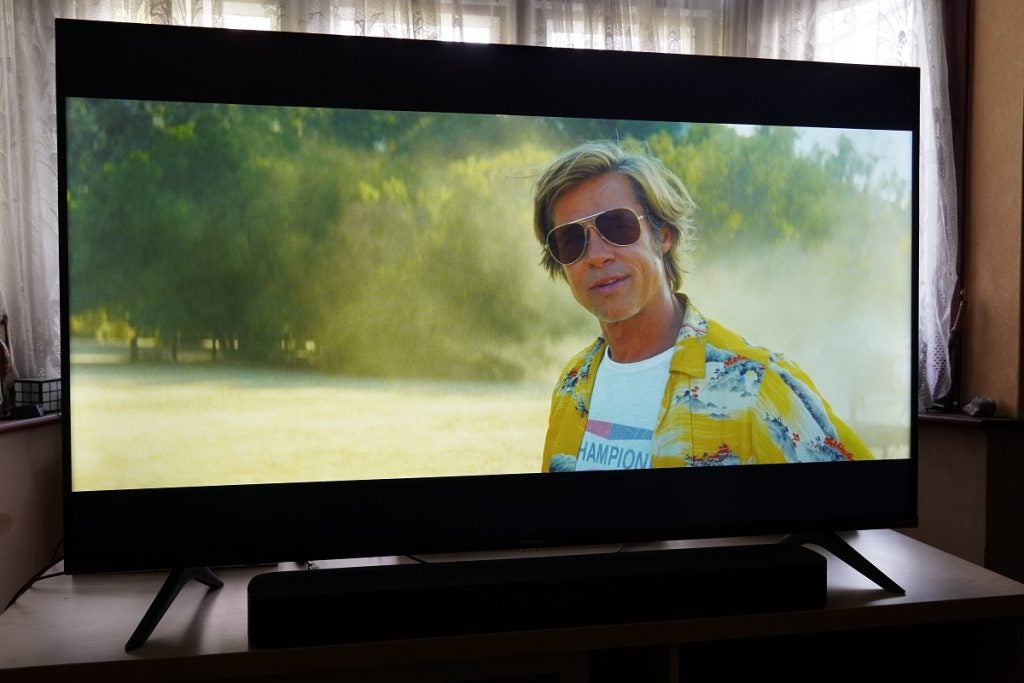 That lack of HDR pop is noticeable in the HLG feed of His Dark Materials on iPlayer. Compared to the LG 50UN70006LA, it lacks the richness and saturated colours of that TV’s HLG implementation. 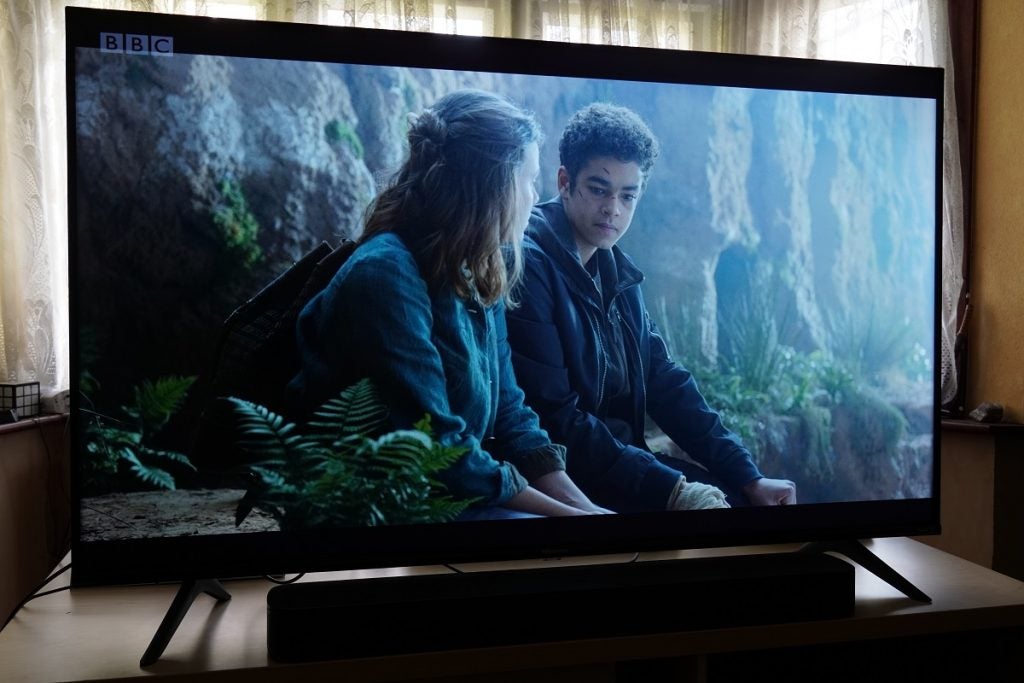 A lack of HDR fireworks again manifests in the 4K Blu-ray of Alien: Covenant. As the crew fix the damage to their ship early on, the space suits and golden solar sails lack the vibrancy and wide colour range that more expensive TVs can dole out. Black levels vary from fairly good head-on to less so at wider angles, the DLED backlight compromising the A7200G’s contrast ratio in darker HDR scenes, especially compared to the Samsung UE50TU7020. 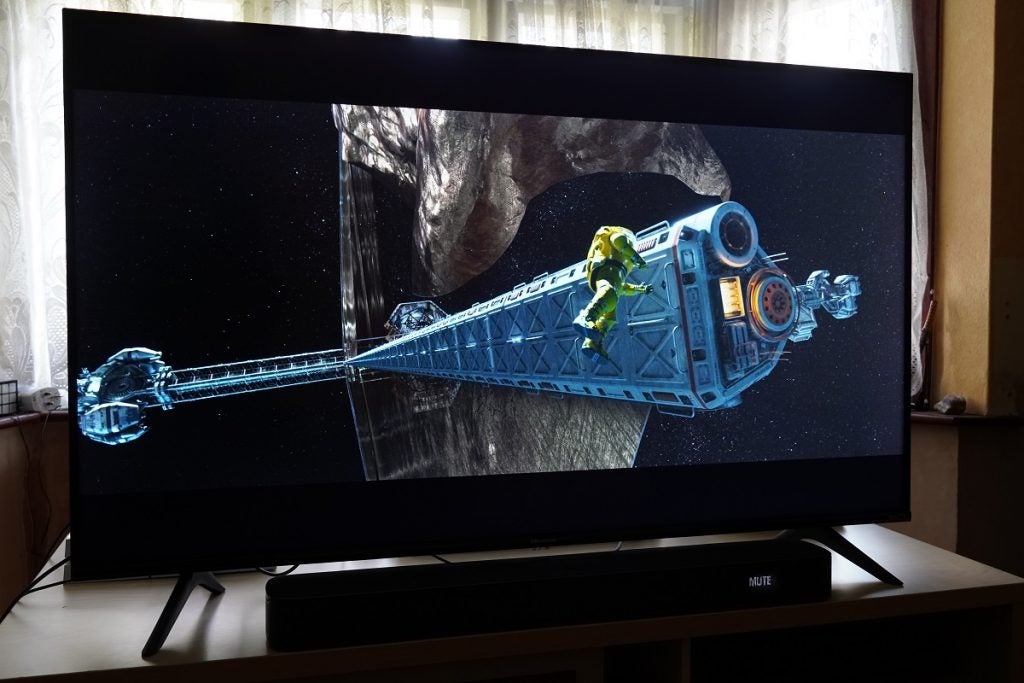 However, a benefit of the Hisense A7200G’s DLED panel is that shadow detail is better perceived than on some similarly priced sets. As Captain America infiltrates the Lumerian Star in The Winter Soldier (4K Blu-ray), the darker parts of the image aren’t shrouded in complete darkness – so it’s a compromise that can work in the set’s favour. 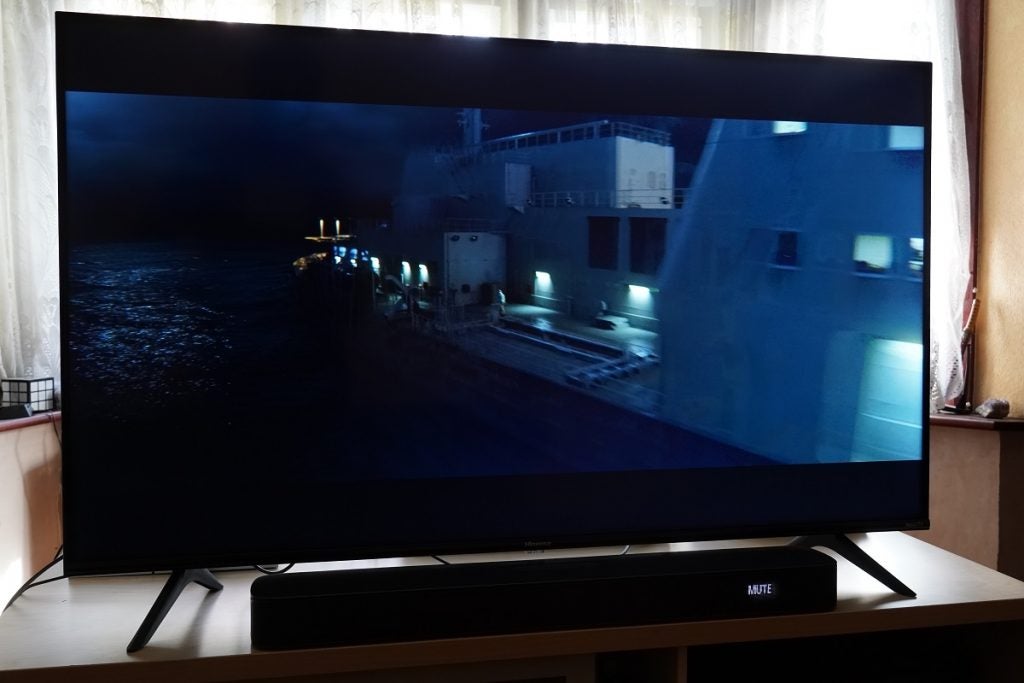 Screen uniformity is fairly good, but towards the edges you can detect some mild backlight bleed and discoloration in Tenet. It isn’t the worst I’ve seen, and most likely won’t notice it. There’s no form of motion/MEMC control on this Hisense Roku TV, but it handles motion well enough with sports/motorsports, so distracting artifacts are kept to a minimum. 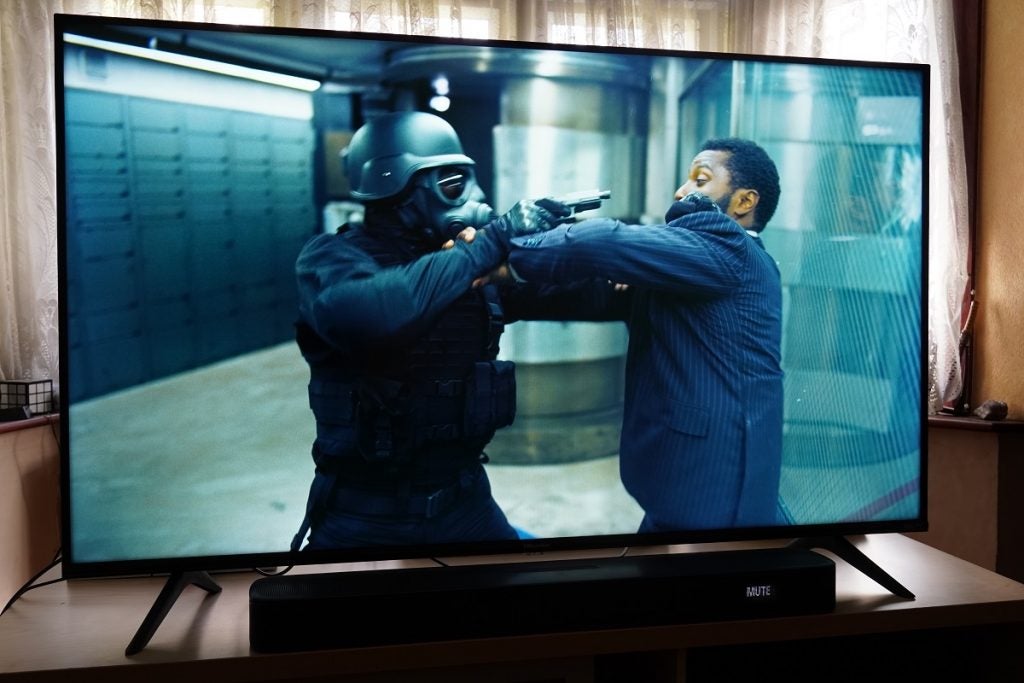 The sound quality of the R50B7120UK was a surprise, but the sound from the 50A7200GTUK’s 2 x 8W speakers is a step down – despite being the same configuration.

The TV struggles to convey the action scenes in Tenet with much dynamism, and while there’s decent detail and clarity, impact sounds lack punch. Bass is soft but avoids distortion, but for everyday, undemanding viewing, the TV is fine. 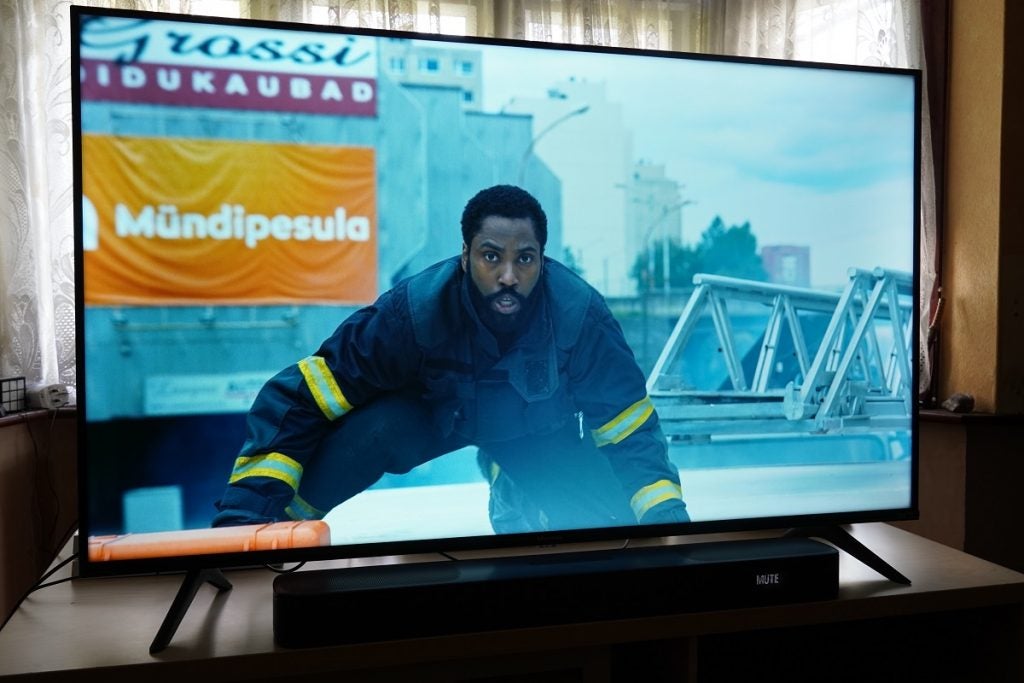 It’s with music where things get messy. Playing from Spotify tracks were lean, shapeless and flat in description. BBC Sounds offered good vocal clarity in ‘Speech’ mode, but sounded harsh in every other. Trying to play with the settings and fiddling with DTS TruVolume introduced as many problems as it did solutions.

If you’re going to be watching films and listening to music – and I imagine many will – then I suggest a look at our best soundbar list.

The Hisense R50A7200GTUK doesn’t offer a huge upgrade over the original in terms of picture and audio. However, given it’s replacing the outgoing B7120UK and throwing in a few more features – more than you’d get from most TVs at this price – the Hisense 50A7200GTUK Roku TV hits the mark as one of the more compelling budget sets currently available.

You should buy the Hisense R50A7200GTUK Roku TV if…

You should not buy the Hisense R50A7200GTUK Roku TV if…