For TVs that lack smarts, the Roku Streambar provides great set of smart features at an affordable price and good audio quality. It sounds bigger than its size lets on, video streaming is good and it has all you need to turn a non-smart TV into a very smart one.

The Roku Streambar is a video streamer and a soundbar. Quite frankly we’d never have come up with the idea, but now we’re wondering why we’ve not seen it before.

Putting Roku’s streaming smarts inside a compact soundbar offers plenty of convenience, especially for those with TVs that lack smarts. But while we know all about Roku’s streaming prowess, its foray into home cinema audio is an unknown.

If the combo of streaming and sound in a space-saving package appeals, the Streambar might be of great interest.

The Roku Streambar is miniscule by soundbar standards. Measuring at 61 x 356 x 107mm (HWD), it is positively diminutive in stature. So small, in fact, it’d be tempting to cart it over to someone else’s house for a streaming night if the occasion arises.

It is well-built, though it looks fairly nondescript in front of a TV. It’s small enough to avoid potentially blocking a TV’s IR signal, which is handy considering the varying sizes of TV stands and feet.

The black matte finish is tidy, with the Roku logo in the middle of a speaker grille that extends to either end. Behind the grille are four 1.9-inch full-range drivers, with two positioned as centre speakers and the other two angled out to the side. Just above the Roku logo is the Streambar’s LED light. It’s discrete enough to not be of bother, but can be turned off if it is.

Around the back you’ll find the connections as well as sockets for wall-mounting. Buttons on the remote are clearly laid out, with enough space so your thumb doesn’t get in a muddle. Plus there are quick access buttons to Netflix, Spotify, Rakuten TV and Google Play. 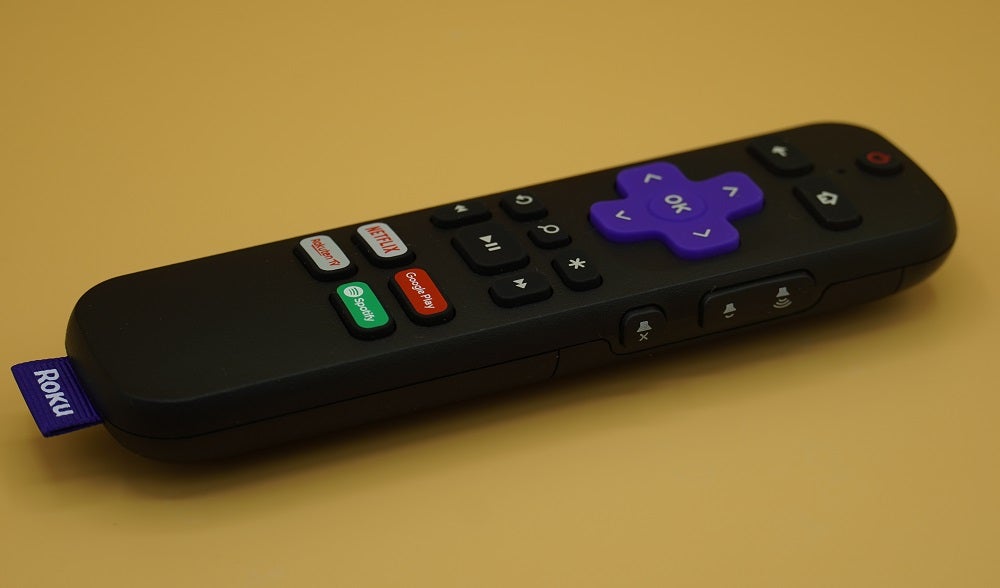 How it differs from remotes shipped with previous Roku players is that it has an Off button (that can turn the TV on and off), with volume and mute buttons located on the side. The remote allows for search via voice, and a press of the Home button directs the user back to the Roku homepage from whatever source or input you were on. You can also control the Streambar with the Roku Mobile app.

Control only extends over the Roku UI, not your TV, so you’ll still need the TV remote. It’s a slight bump in the search for a seamless streaming experience.

Roku Streambar features – The streaming centre for both video and sound

That the remote doesn’t offer control over your TV points to the Streambar’s primary objective: to make the Roku ecosystem the centre of any home streaming set-up.

That ambition is further aided with support for Apple AirPlay and HomeKit, so users can stream audio from iOS devices or control compatible smart products from the Apple Home app. There’s no built-in voice assistants, though the Streambar can “work with” Alexa or Google Assistant via an external device. 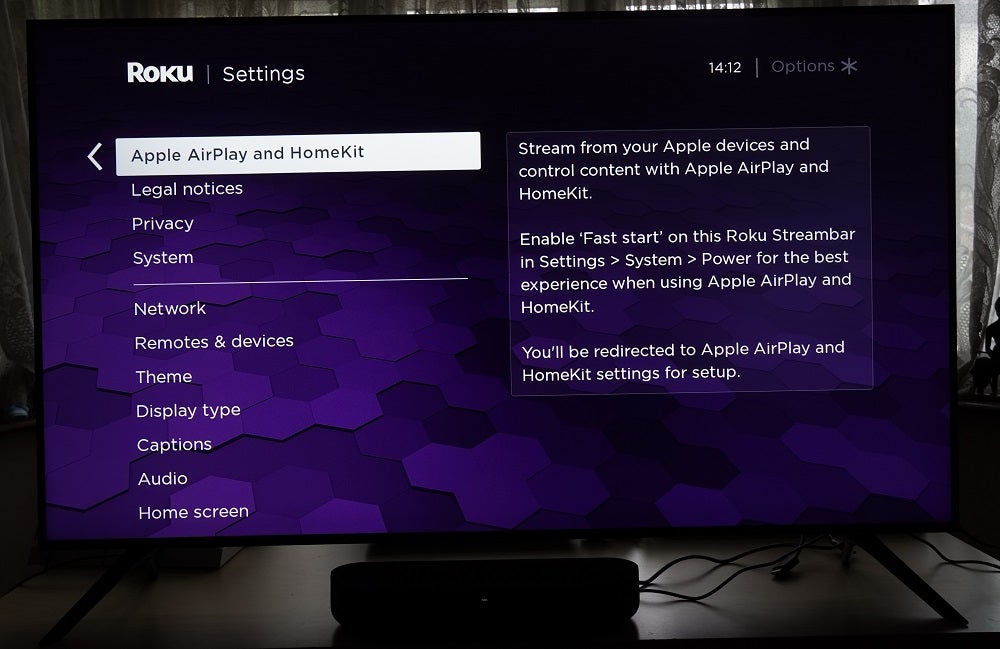 Set-up is simple, but you will need access to a browser as the process requires completion online. The Roku platform checks for updates once a day and should update itself in the background. Everything you need is in the packaging, including HDMI and optical cables, as well as a very long mains cable.

Connections cover HDMI ARC, digital optical and a USB 2.0. For wireless there’s Wi-Fi and Bluetooth 5.0. A USB adaptor for a wired Ethernet connection is sold separately. 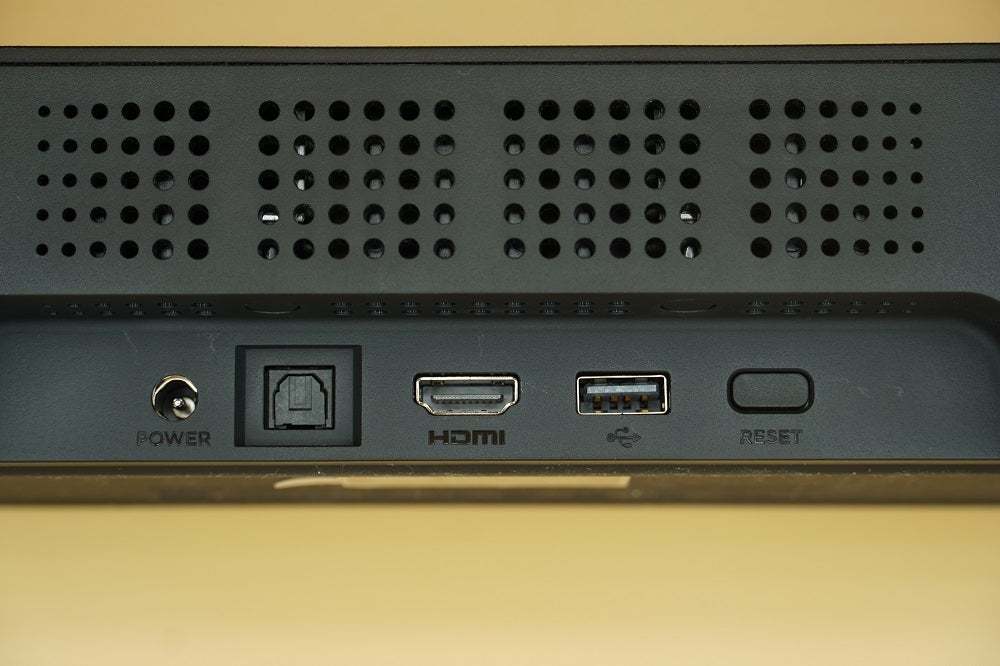 The built-in streamer delivers 4K HDR performance (HDR10) with the Streambar able to upscale 720p and 1080p sources to 4K. The number of channels and apps in 4K HDR is not as many as you may think, and there’s no HDR10+ or Dolby Vision. The spec sheet has HLG HDR, but there is currently an issue with its implementation and both Roku and BBC are working on a fix as soon as possible. For audio the Streambar supports Dolby Audio and PCM soundtracks.

There are over a thousand apps and channels, and thanks to Roku’s platform agnostic approach, apps like Netflix, Tidal and StarzPlay sit alongside curiosities such as the Dog Relaxation Channel and Metal Mania. Whatever your interests, you’re unlikely to be lost for something to watch. 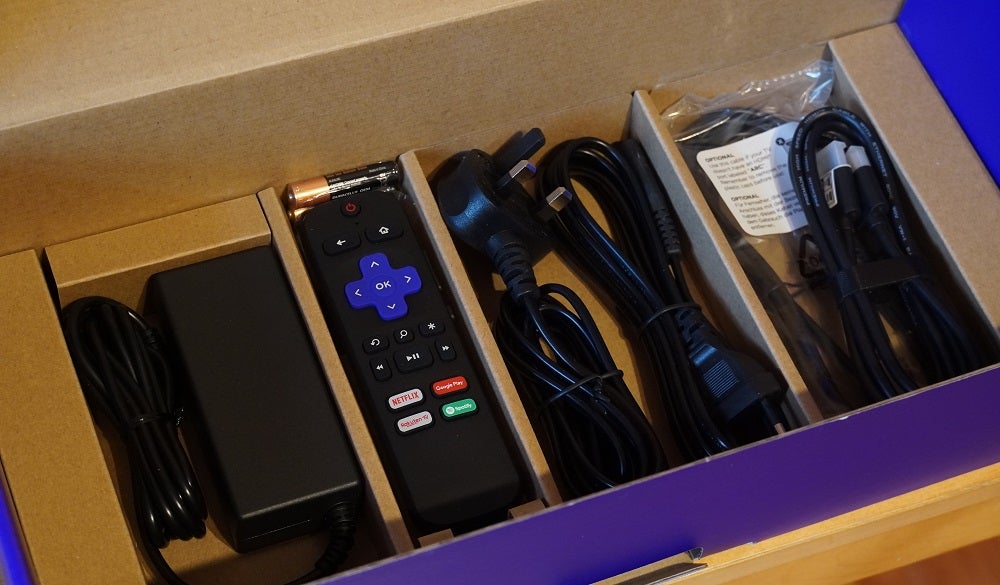 The Roku UI is consistent across all devices and remains so with the Streambar. Home is where you’ll find the main streaming apps (and you can add as many apps as you want); My Feed keeps track of alerts set for films when they appear on the various apps and channels. 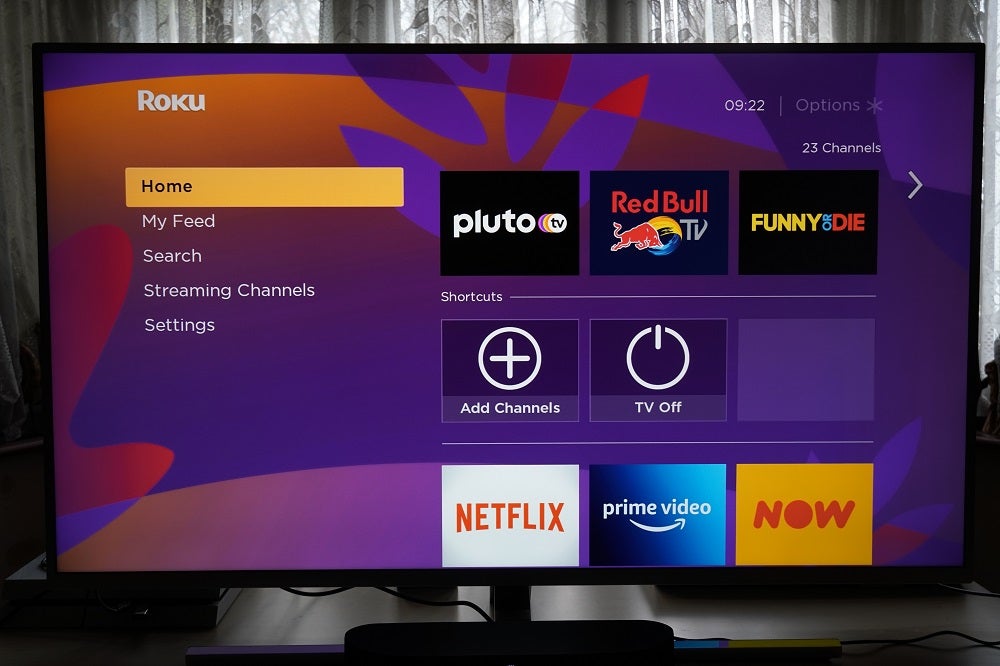 Search is text based, but considering how frictionless voice search can be, its presence feels rather redundant. In Settings you can add payment cards, set up HomeKit and tweak audio, among other things.

Voice recognition has been tweaked to recognise more natural phrases, and voice search is much faster and responsive than typing. Navigation through the interface isn’t available yet. Ask to “open settings” and the response is “not yet supported”.

By holding the Search button and uttering a quote, you should get relevant results. Those results aren’t always what you’re looking for, though. “You can’t handle the truth” from A Few Good Men brought up UFO Chronicles: You Can’t Handle The Truth. More successful was “I’ll be back”. Unfortunately the Roku was on less familiar terms with “rubbing is racing” from Days of Thunder, which resulted in a polite “no, I don’t understand”.

Roku Streambar performance – Sounds bigger than you might expect

What’s striking is how big the Roku Streambar sounds. It also punches above its weight class in decibel terms too, with the Streambar able to go loud without becoming overly sharp or harsh.

With two dedicated centre channels for voices, the soundbar has a good grasp over dialogue. Speech is lifted so it sounds like it’s coming from the mouths of those speaking, though dialogue is prioritised to such an extent that other aspects of a soundtrack recede into the background even with Speech Clarity set to off. Bass performance is punchy rather than deep or weighty, but an improvement over a TV. Just don’t expect miracles from a unit of this size. 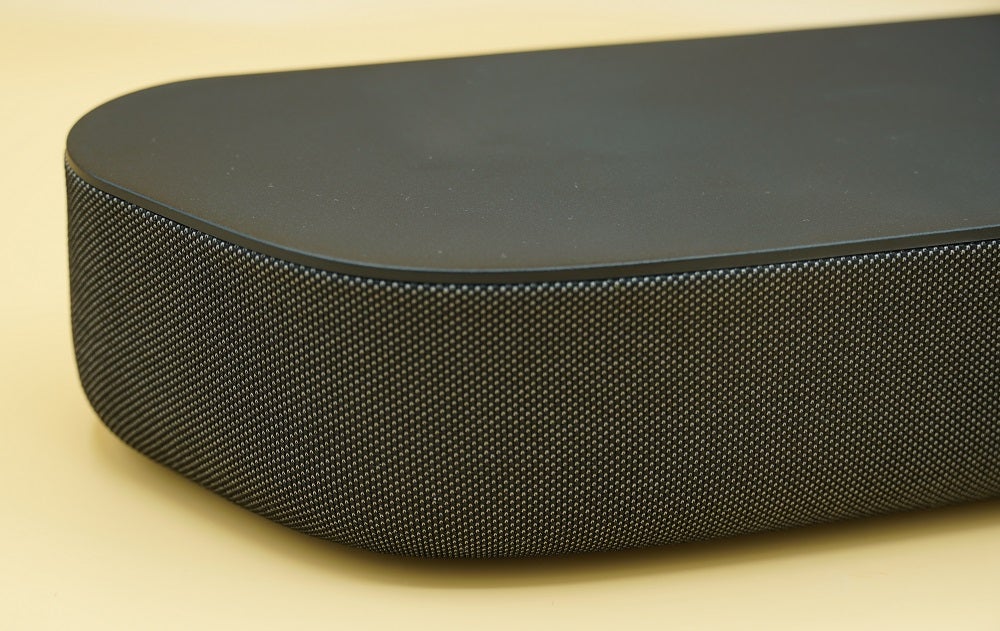 Audio is more in tune for apps on the Roku platform. Streaming Lady Bloodfight on Prime Video from the native TV app and Roku version, and bass was a touch harder on the TV app. Listening to music over a Bluetooth connected is a bit dull and restrained. If you have Spotify Connect then that avenue offers a much better experience, delivering a clean, detailed and clear sound.

The Streambar has a good stab at creating width through its angled speakers, creating a soundstage much wider than the bar. The scene in Avatar where Jake is surrounded by viperwolves and the noises they create are effectively placed either side of the soundbar to create a sense of space. 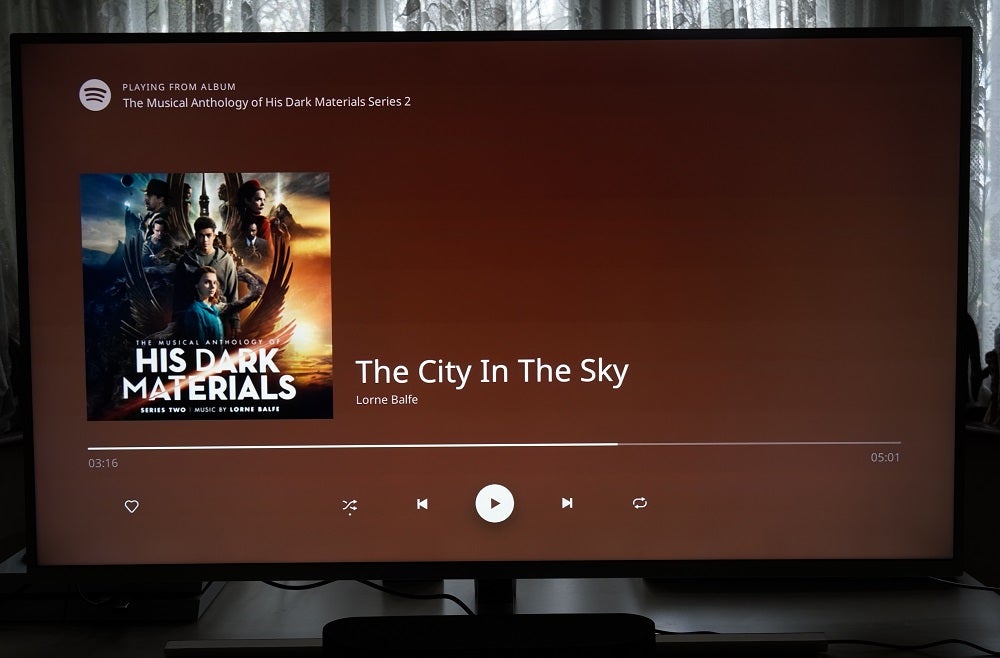 However the Streambar isn’t a soundbar for all occasions. The action sequence that opens up Terminator: Dark Fate leaves the Streambar struggling with its complexity. Distortion of bass is also apparent when Grace unleashes a volley of shotgun rounds into the Rev-9 during their first encounter.

That said, its delivery is clear and detailed with Whiplash on 4K Blu-ray. There’s a definable sense of punch and clarity with crashing cymbals and drums, as well as a decent sense of dynamism. It’s capable of subtlety too, getting the pitch of the white noise in the scene after Mark Watney accidentally creates an explosion in The Martian. In short it’s a likable effort.

In terms of video streaming the Streambar depicts an image well. It’ll of course depend on the capabilities (and settings) of your TV, but streaming in 4K and HD provided consistent levels of detail and clarity. 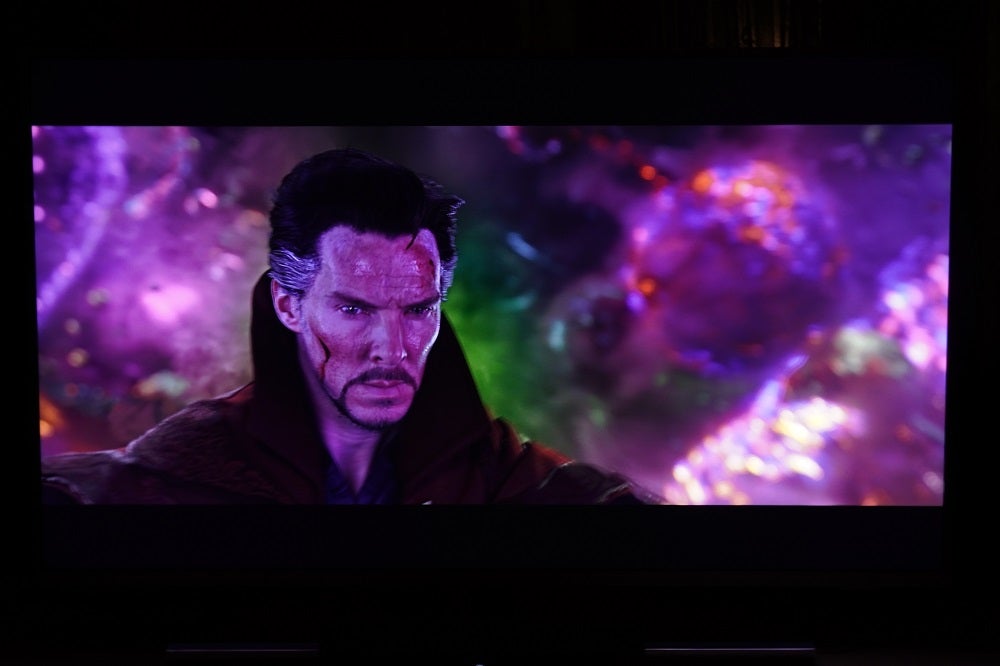 Watching Doctor Strange on Disney+ in 4K HDR and the Streambar draws out a colourful performance, especially when Strange faces off against Dormammu. Black levels are solid with no sign of the crushing of blacks spotted on the Premiere. 720p streams lack detail and clarity as you’d expect, but they are watchable. Go off the beaten path and image quality is likely to vary considerably.

Image quality from the popular apps is free from artifacts and streams get up to speed quickly. Overall, it’s a satisfactory video performance. 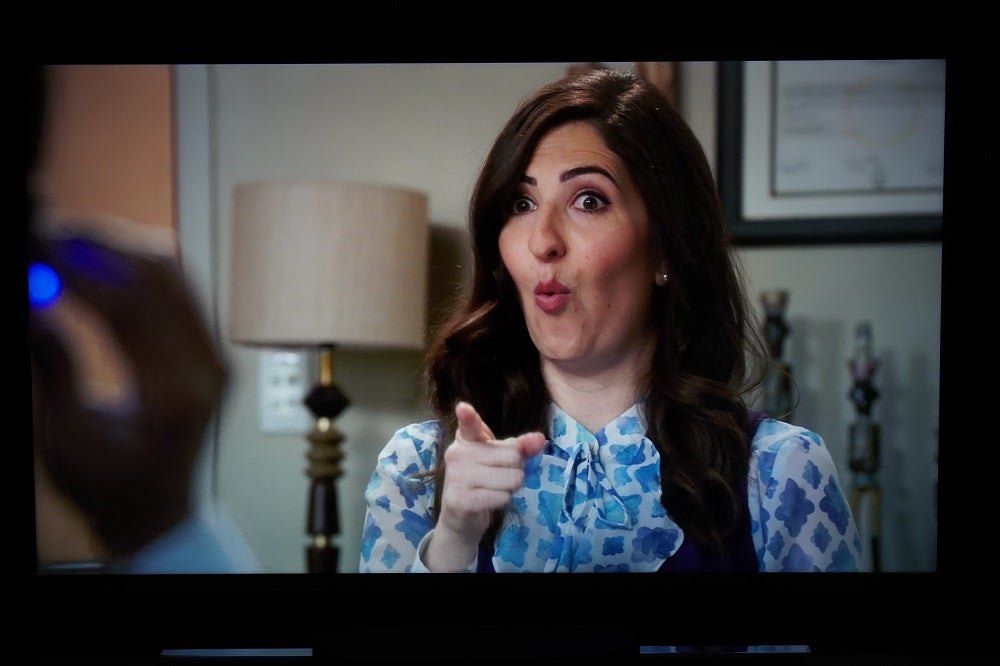 You should buy the Roku Streambar if…

The Streambar is convenience personified. Not only can it improve your TV’s sound, it’s got all your favourite streaming apps too.

For those with no interest in Atmos or DTS:X frills, the Streambar positions itself as a great value proposition for cheaper TVs with its smart features and sound, but less so for TVs that already have the Roku’s slate of features.

Of course, one of the main attributes of the Streambar is its affordability. The Roku Streambar offers enjoyable audio quality that’s bigger and louder than you might expect from such a small unit.

You shouldn’t buy the Roku Streambar if…

here is an issue with HLG HDR, but we’ve been told a fix is on the way.

An alternative for those who do have a decent streaming set-up, but want to improve sound on a budget would be the Wharfedale Vista 200S. It offers better sound and bigger bass through its wireless subwoofer for a similar price.