If a budget TV with smarts is what you’re after, then the Hisense B7120 Roku TV ticks most of the boxes. Picture quality is enjoyable (less so with SD), and the sound quality is better than expected. The headline aspect of the B7120UK is its smart features, and Roku’s simplistic and accessible interface ties everything together. The Hisense B7120 Roku TV is a satisfying and accessible budget TV.

The Hisense Roku B7120 (R50B7120UK) TV was the first Roku TV models to hit the UK, bringing smarts and Freeview Play in an affordable package. It has since been replaced by the Hisense R50A7200GTUK Roku TV.

Roku’s TVs are massive in the US. One in every three TVs sold across the pond has Roku OS. Roku’s platform agnostic approach to apps allows everything from Disney+ and Netflix, to Spotify and to co-exist on its platform.

Roku has partnered with Hisense to bring its streaming nous to the UK. Does this collaboration have the makings of a budget star?

Hisense Roku B7120 price and availability

This a budget TV and as such the quality of build here is sensible rather than eye-catching. The B7120 is effectively the Hisense B7100 with another name. It’s made mostly out of plastic, weighs a not-too-heavy 9.3kg and measures in at 1127 x 656 x 256mm (whd) with the feet attached.

The feet sit towards the edges and while that’s fine at this size, if you’re looking at the 55- or 65-inch models then it’s worth considering whether your stand is wide enough. Assembly is easy-peasy, simple as slotting and screwing the feet in. 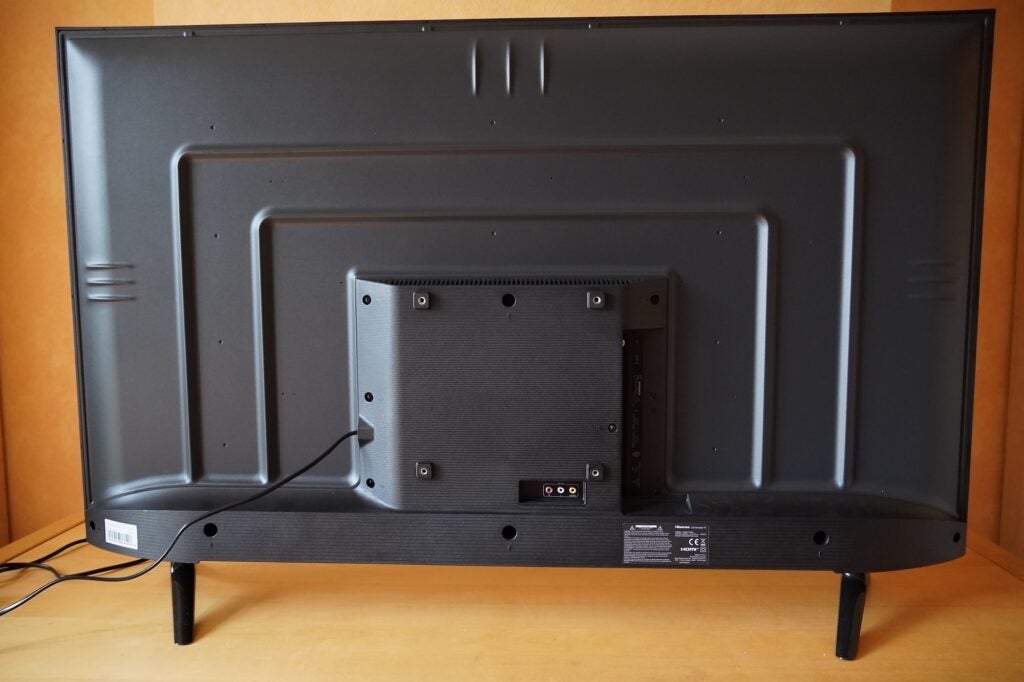 With around 7cm of clearance, a soundbar could be slotted in below and not block the IR sensor. Wall-mounting is possible, but brackets are not included.

The bezel is noticeably thick but looks aren’t the main attraction here. What you see is what you get, and what you get is a budget TV that avoids looking or feeling too cheap.

The remote is like what you’d find with Roku’s streaming players, but where it differs is the inclusion of the four colour-coded buttons (including the Red button), Freeview Play and a TV and EPG Guide button. However, the zapper feels plasticky and isn’t the most responsive. I’d suggest using the app instead – more on that later. 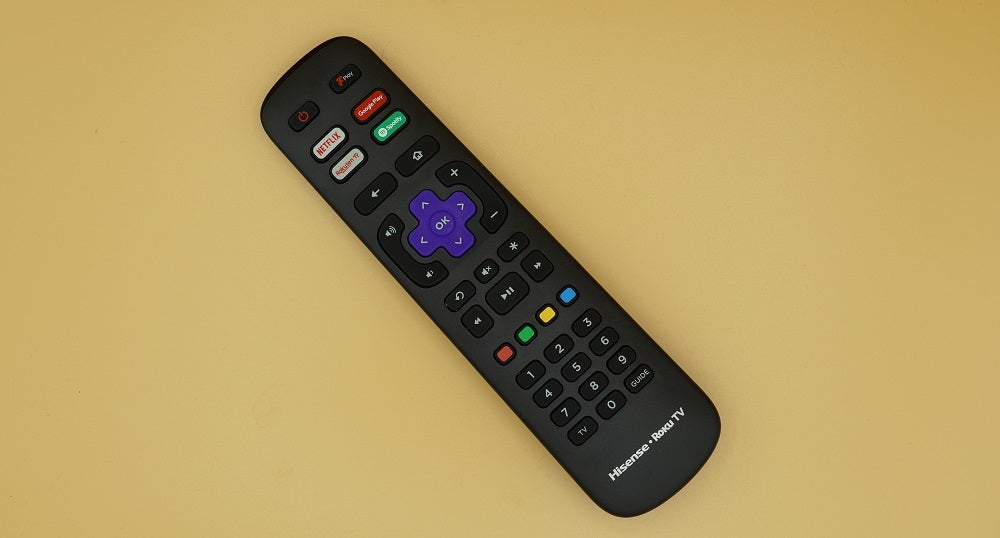 Hisense Roku B7120 TV features – Easy to use, plenty of apps (and Freeview Play)

Connections total at 3x HDMI (4K at 60Hz), a Common Interface slot, 3.5mm jack, DVB-T2 tuner, composite video, Digital optical out and LAN. The spec sheet lists two USB ports, but having searched high and low I can only find one – plug in an external HDD here and media files can be played, or the Live TV Pause functionality enabled. 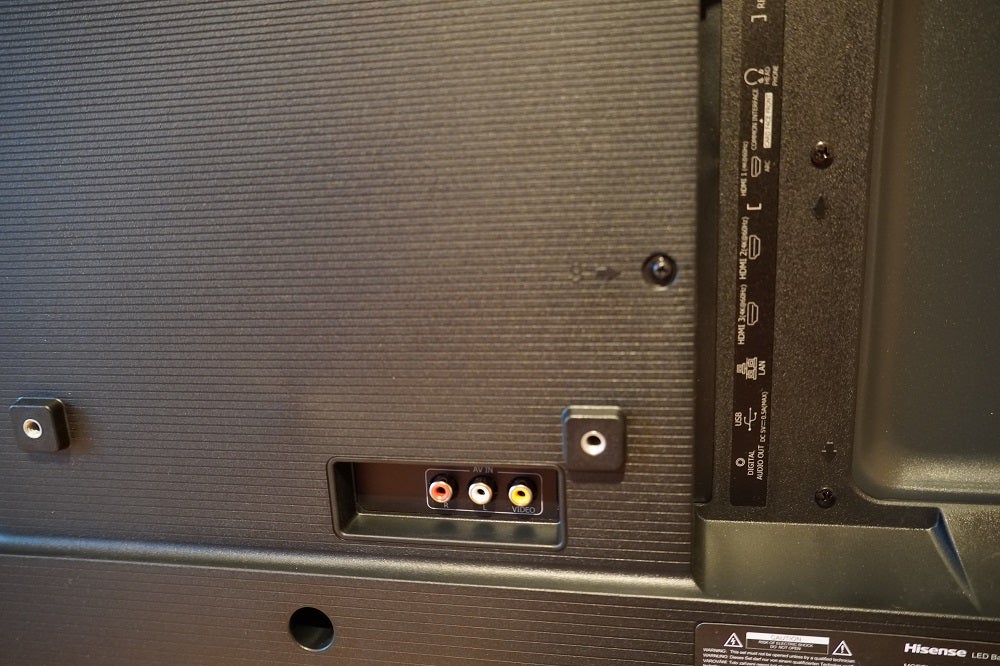 Wireless connectivity amounts to Wi-Fi; there is no Bluetooth. If you want to listen to TV through a pair of headphones, that can be done in the app via the Private Listening feature. Google Chromecast isn’t supported, which is a disappointment, but you can cast apps that have the DIAL (Discover and Launch) protocol, which amounts to YouTube and Netflix.

Setup is virtually frictionless. Roku advises creating an account to access the Roku Channel Store and throws in codes for three free HD movies from Rakuten TV. The Hisense Roku TV also supports automatic updates to keep it ticking with the latest features.

One of the great things about the Roku OS is that it’s consistent across all devices. If you own another Roku device the interface will be familiar – and even if you don’t, it’s easy to get to grips with. The only obvious difference with the B7120UK is the inclusion of the Live TV and Freeview Play. 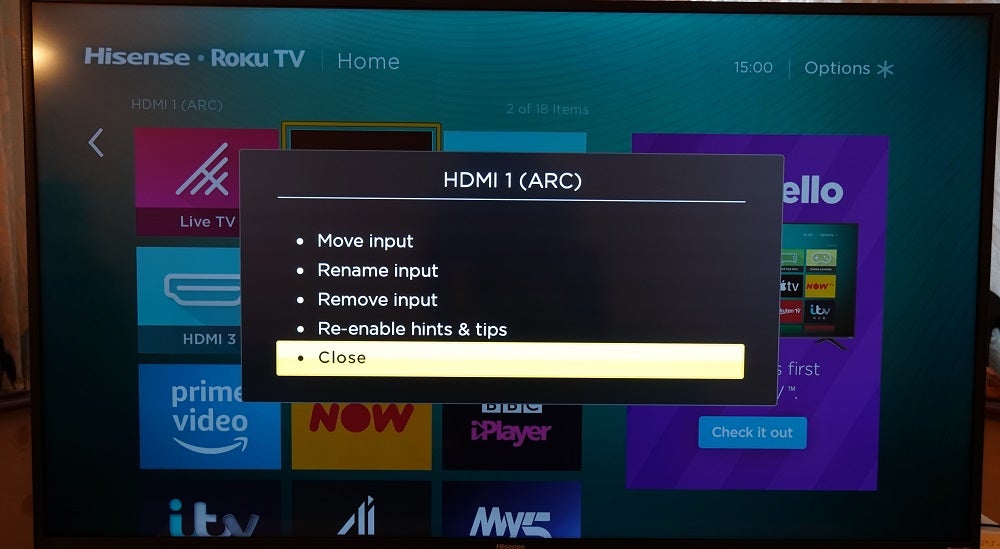 The main screen is divided into Home, My Feed, Search, Streaming channels, Settings and Freeview Play, which stores the various video portals such as ITV Hub, All 4 and the Horror Bits channel.

The Home section features the main streaming apps, and you can select either of three HDMI inputs, with a small preview offering a look at what’s playing. More streaming apps can be added as well as customising the homepage further, which includes changing the names of the HDMI inputs, by pressing the star button. 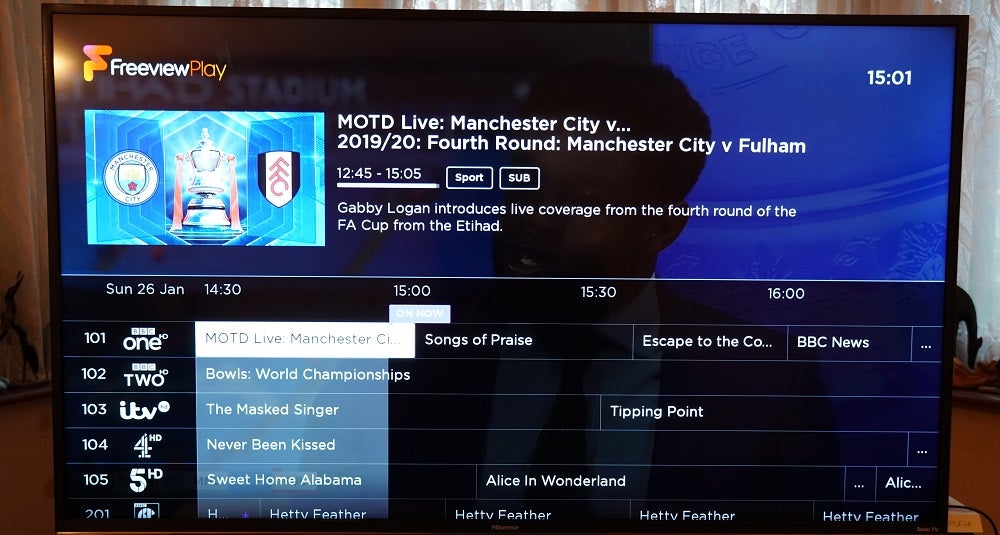 Films and other content can be tracked through alerts in My Feed, and Streaming Channels is home to the huge amount of content on the Roku platform as well as The Roku Channel, which will be the new home of content from the short-form and short-lived Quibi streaming service. Settings is where you can tinker with picture and audio via the star button on the remote – but not all the settings are there.

The rest of the settings are nestled away in the app in “Expert Settings”, where Noise Reduction, White Balance and Gamma can be altered. Inexplicably, there’s no mention of this in the manual and that’s an oversight on Roku’s part. 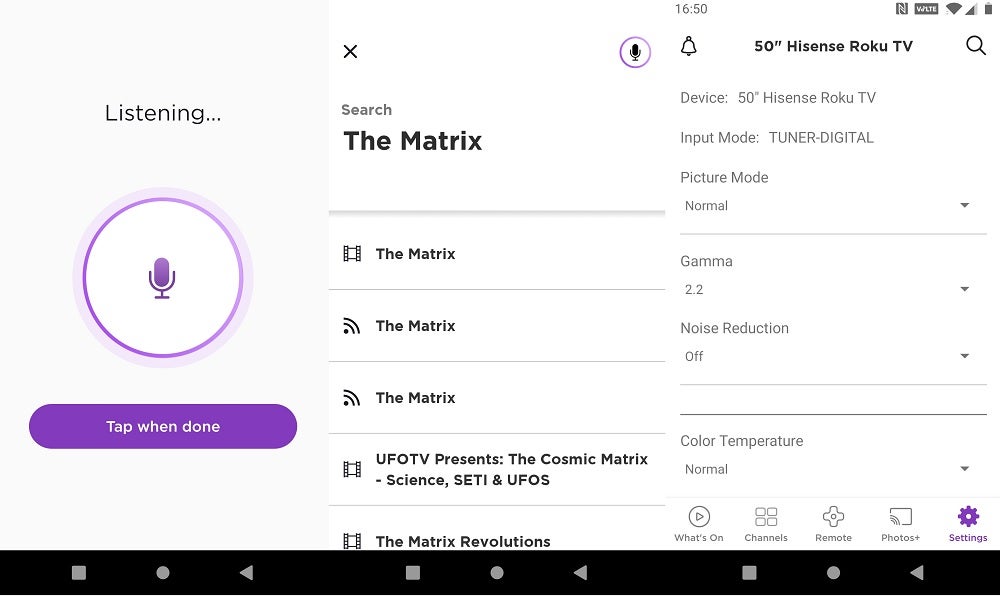 Voice search on the app works differently to other TVs (there’s no Google or Alexa). Press the mic button, say what you’re after and it will call up services that carry the movie or TV show not the title itself. Some results redirect to the TV app; others – such as Netflix’s Mindhunter – tried to open the Netflix app on my smartphone instead.

Hisense and Roku have been circumspect about the exact input lag, but from our tests Game Mode turns in a snappy 12ms, making this a good choice for gamers.

While I’m not expecting fireworks from the Hisense R50B7120UK, if you’re after an affordable TV that performs well, the Hisense B7120 Roku hits more than it misses.

HDR10 and HLG are supported, but with around 300 nits of average (not peak) brightness, it’s not enough to do HDR justice. Watching Seven Worlds, One Planet on iPlayer (HLG) and it didn’t serve up the punchiest application of HDR. Nevertheless, the show looked good and offered a good sense of fine detail. 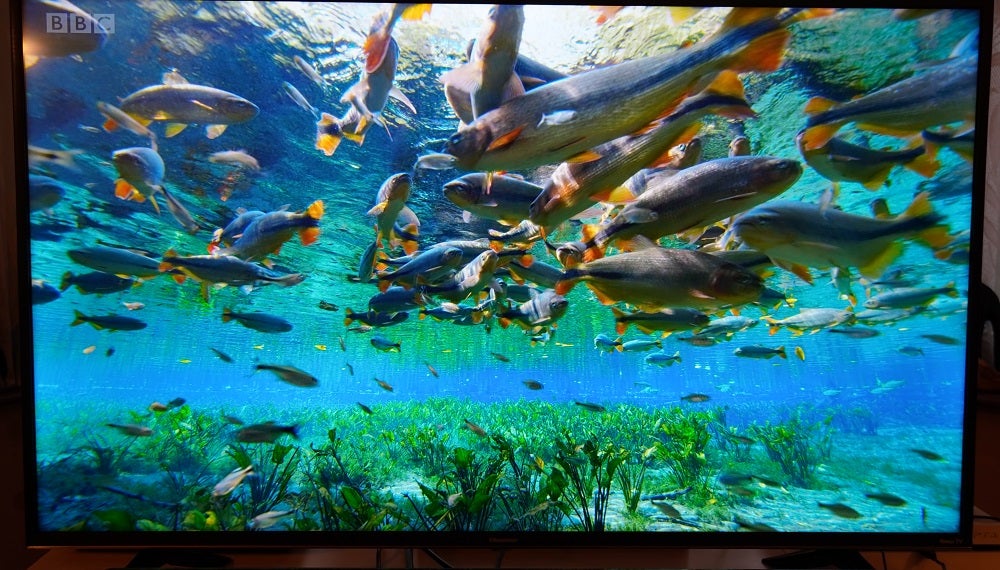 HDR picture modes total three: Bright (effectively Vivid), Dark (Cinema) and Normal. Unusually, Vivid would be my choice with its slightly brighter and better colours (it’s worth setting the TV to its brightest levels as well). Unlike other dynamic modes, it’s not overdone and looks better than Dark HDR. The description for Normal says it boosts colours, but I can’t see a difference with it on.

The panel is a Direct-LED (DLED) backlight and contrast suffers as brightness is consistent across the entire panel. The blacks in the 4K Blu-ray of Logan Noir are fine – but only fine; highlights are rendered dimly too. You’ll also want to view the TV head-on as colours lose saturation at wider angles.

Skin tones appear natural, but rosier complexions can err towards ruddy. Quentin Tarantino’s Once Upon a Time… in Hollywood walks a fine line in this regard, and the Hisense B7120 can overstate it. 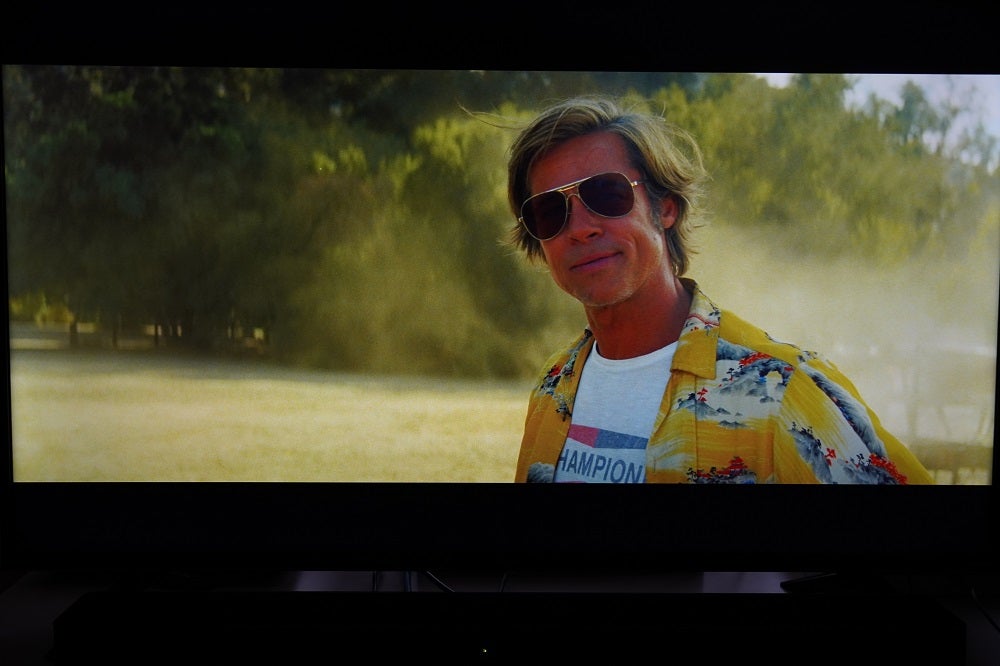 Scenes that feature lots of white – such as when Eames leads the projections on a “merry dance” in the snowscape scenes of Inception – are rather formless in how they look. There are also instances of blooming during the first series of For All Mankind on Apple TV+.

In terms of the HD performance, and the faces of the presenters on NFL This Week faces are smooth and complexions shiny, but that’s not unexpected and switching off Noise Reduction alleviates that a little. Black performance is improved over the Roku Premiere player, with less evidence of black crush.

So, while HD performance offers good, strong colours and decent clarity, SD is rather ugly – even with Noise Reduction turned on to massage its rougher aspects. It’s the weakest aspect of the Roku TV’s image. 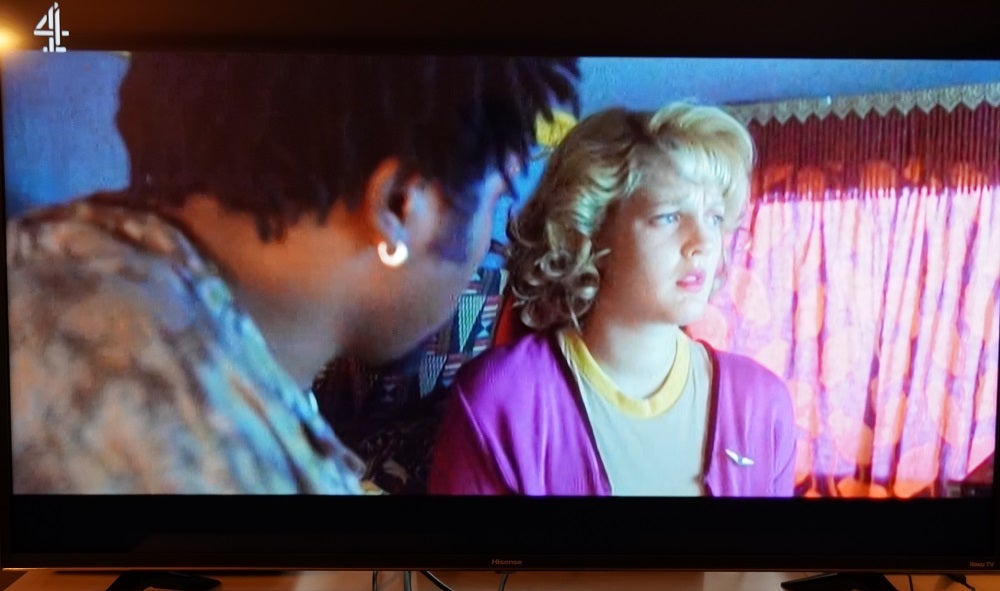 It’s often the case that audio is the weakest aspect of an affordable TV. Packing DTS Studio Sound and driven by 8W drivers, the Hisense B7120 Roku TV puts in a decently big sound at normal listening levels. Voices are projected with clarity and it’s clear off harsh or shrill tones.

Despite a mode called Big Bass, bass is lacking. Several other options include High Treble, boosting voices (at the expense of everything else), while Theatre expands the soundscape a smidge more for movies. An external sound system would always get our vote, but there isn’t a huge rush to grab one here. There’s no Dolby Atmos passthrough, though.

You should buy the Hisense Roku B7120 TV if…

The Hisense Roku R50B7120UK hits the nail on the head with its smarts. Its platform agnostic approach means there’s lots of apps all corralled onto one platform.

The Roku TV interface is simplicity personified. Well laid out and easily navigable, the only issue is that the more complicated settings are hidden away in the app.

With 12ms of input lag, the Hisense Roku TV is good for gamers, though don’t expect it to have the next-gen gaming features for the PS5 and Xbox Series X.

You shouldn’t buy the Hisense Roku B7120 TV if…

There’s not enough brightness for HDR and contrast is further affected by the DLED panel it uses, which reduces the impact of black levels.

The TV’s upscaling abilities are taken to the limit with SD content and it suffers. It’s a blurry and noisy image, more so than I’ve noticed with similarly priced TVs.