What is the Google Pixel XL?

Many have questioned Google’s reasoning for taking the direction it has with the Pixel XL. Last year’s Nexus 6P was a great phone at a great price. The Pixel line isn’t about value, however; the focus here is on sheer quality. The Nexus phones, as a result of their price point, were subject to trade-offs here and there – but this isn’t so with the Pixel handsets.

So, this isn’t a cheap phone then – and in fact, it matches up closely to what you’d pay for an iPhone 7 or 7 Plus. That’s fine, though, because the Pixel XL is better than an iPhone 7. And for many it’s better than the Samsung Galaxy S7 too.

Google has finally managed to build its “iPhone” – and that should make other Android phone makers very worried indeed.

WATCH: Is the Google Pixel overpriced?

Yes, it’s true: the Google Pixel XL looks like an iPhone. Well, sort of. It’s a black (or white or blue) slab of metal, with curved edges and a rear that tapers ever so slightly to help it sit better in your hand; it has also enabled Google to do away with the camera bump, which proves a cause of concern for so many. 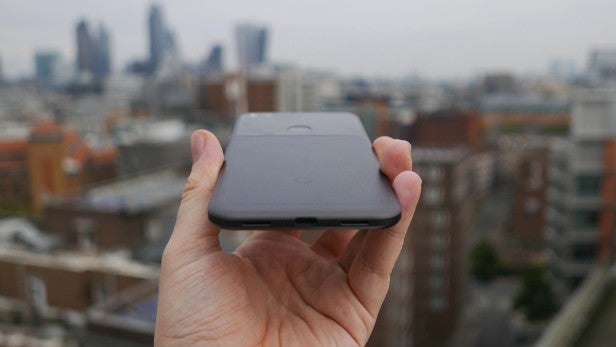 The sides chamfer slightly, and while the handset is probably a little thicker than you’d expect – especially if you’ve held a Moto Z – it’s comfortable to hold. Overall, it isn’t actually that much smaller than an iPhone 7 Plus, but it nestles perfectly in my hand and feels so much more manageable than Apple’s hulking beast. A ridged lock switch sits on the side, above a clicky volume rocker.

Although there are flashes of inspired design, overall the focus clearly more about functionality than flashiness. While the front is sparse, the back is a tad more interesting. A glass panel covers the camera and stretches down over the circular fingerprint scanner. This gives the rear of the phone a two-tone look that I actually really like. It’s a fingerprint magnet, however: like the Jet Black iPhone 7, it’s seemingly prone to picking up smudges and abrasions from just looking at it. 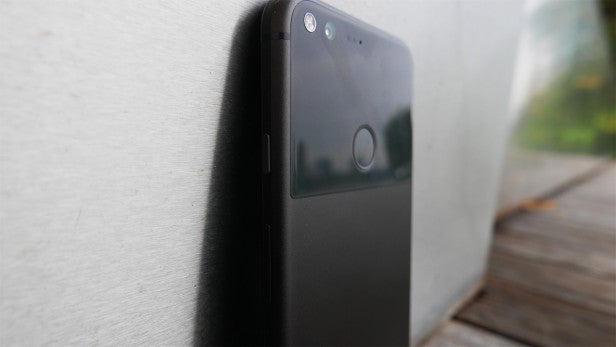 I still love having the fingerprint sensor on the back in all situations apart from when the phone is flat on a desk. It’s the natural position where my finger rests when I pick up the phone – and, of course, the lack of the physical home button means it’s really the only place for it to go.

Branding is kept to a minimum, which is rare for an Android phone. There’s only a “G” logo stencilled onto the back; HTC may have helped Google to build the phone, but there’s no mention of it anywhere.

The Pixel XL does lack some of the stalwart features we’ve come to expect from a flagship priced phone. There’s no IP68 water-resistance rating of the iPhone 7 and Samsung Galaxy S7, the powerful speakers of the HTC 10, or a microSD slot for expanding the 32GB of basic storage.

Related: What is IP68 water-resistance? 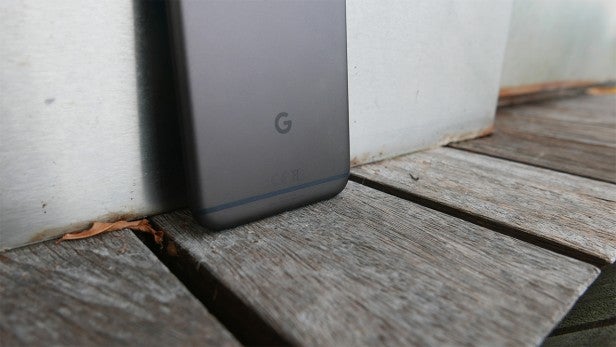 While I don’t believe that water-resistance is a necessary requirement, it’s a reassuring feature that I’ve come to appreciate. This is true of stereo speakers, too – they’re not mandatory, but they’re a nice touch.

To be honest, though, the down-firing speaker included here isn’t too bad, but its position means it is easily blocked if playing a game. A microSD card can be found on pretty much every Android phone in 2016, and it’s a shame there isn’t one here.

My main issue with the Pixel XL isn’t the design; it’s the durability of the handset. I’ve been using the phone for a while now and the exterior has already picked up a ding on the corner, even though I haven’t dropped it, and a bevy of scratches to the aforementioned glass panel. I’ve had an iPhone 6S in my pocket for nearly a year and that is yet to scratch at all. Will this become a problem? I’ll have to wait and see.

But this isn’t a design that will rival the Note 7 (R.I.P), nor the Samsung Galaxy S7 Edge. I think the Moto Z is far more attractive, the OnePlus 3 even more manageable, and the Nexus 6P more eye-catching. It looks better than an iPhone 7, but that’s a tired three-year-old design.

Being the bigger of the two Google phones, the Pixel XL features a larger 5.5-inch display with a 2,650 x 1,440 quad-HD resolution. For those after something smaller, the Pixel boasts a 1080p panel at 5 inches.

But as we already know, resolution doesn’t always guarantee a quality screen. Take the iPhone 7 Plus, for example. It has only a 1080p screen but support for a wide colour gamut and a top-drawer LCD panel make for a fantastic-looking display.

Thankfully, I’ve been pretty impressed by the display here; it matches the Samsung Galaxy S7 as the best on an Android phone.

Like the Galaxy S7, Google has used an AMOLED panel, so right off the bat you’re looking at much richer colours and deeper blacks. The black levels on this phone are great; inky and rich, with no grey discolouration. 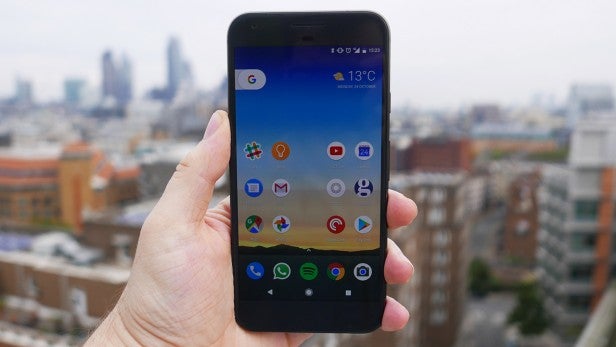 Next to an iPhone, you’ll notice how much brighter colours are on the Pixel XL. Apple’s flagships tend to render colour more accurately, while Samsung’s are much brighter and vivid. I’d say that the Pixel XL sits somewhere in-between. Reds are warm and greens can sometimes look a little fluorescent – but for the most part, the Pixel XL reproduces colours as they should be seen.

Viewing angles are great, too, and although this isn’t the brightest screen I’ve seen – that honour easily goes to the Samsung Galaxy Note 7 – it can be jacked up high enough to make it viewable in all conditions.

Big phones have become the norm now and if you’ve ever used an Android phablet then you’ll feel right at home with the Pixel XL.