TrustedReviews doesn’t give out 5-star ratings regularly, but I'm convinced the S8 Plus deserves that score. Although this doesn't mean the handset is perfect – I'm truly not a fan of the position of the fingerprint sensor and the addition of Bixby – but the S8 Plus is comfortably better than the competition is a number of areas. I pick up the iPhone 7 now, or even the excellent Google Pixel, and both handsets feel old-fashioned.

What is the Samsung Galaxy S8 Plus?

With two subsequent generations of Galaxy S phones now on store shelves, is the Samsung Galaxy S8 Plus still worth your hard-earned moolah?

If you’re on the fence about whether to fork out for one of the newest Galaxy S models, like the Galaxy S10 and smaller Galaxy S10e or better to push your pounds in the direction of an older and cheaper flagship like the S8 Plus, this original review might help you make a decision.

The Samsung Galaxy S8 Plus is undoubtedly a looker from every angle. It’s one of the most elegant Android phones I’ve had the pleasure of handling, putting rival devices, like Apple’s iPhone 7, to shame. The phone’s cutting-edge appearance isn’t at the expense of ergonomics or functionality though.

There’s a 6.2-inch display front and centre. On paper, this sounds massive, especially when you consider that most rivals out there hover between 5.5 and 5.7-inches. One of the last notable handsets to break this 6-inch barrier was the Nexus 6, made by Motorola, which had aptly been codenamed ‘Shamu’ prior to its official launch. Its size was its biggest issue, making for a cumbersome user experience; thankfully, such issues aren’t present with the S8 Plus.

For a phone with such a large screen, the Galaxy feels surprisingly elegant in the hand, a trait that Samsung should be commended for.

The phone’s heavily-curved form ensures that it sits safely in your palm and thanks to its unorthodox aspect ratio, it sports a slim waistline that makes it easy to reach across the display one-handed. Compared to the likes of the similarly sizeable iPhone 7 Plus (which has a significantly smaller 5.5-inch screen) or the gargantuan Sony Xperia XZ Premium, this phone is a comparable pleasure to wield.

Trusted Reviews has partnered with O2 to offer you tariff deals for the following: 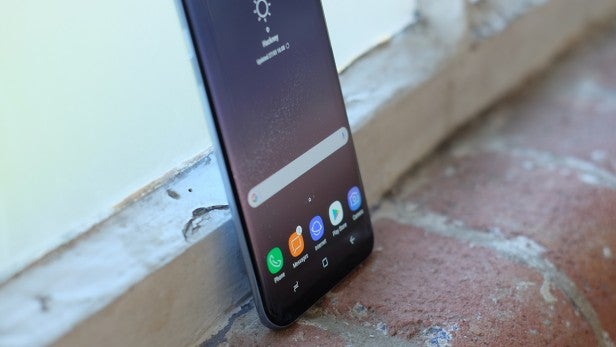 One caveat to the compliments I’m happy to pay to the display is that it’s so tall that reaching the top edge to access elements like the notifications pane with my thumb is near impossible, resulting in the need to switch to two-handed use.

As for other size-based shortcomings, the rear-mounted, offset fingerprint sensor is also a stretch, especially when the rumours had suggested that this phone was going to be among the first to offer an in-display fingerprint sensor. Instead, we’ve got a small, ill-placed capacitive offering that’s harder to reach than on the standard Galaxy S8 without dislocating your thumb.

Along the sides of the device sit your typical volume rocker and standby buttons, but they’ve been joined by a dedicated Bixby key for quick access to Samsung’s new voice assistant. Considering how limited Bixby is, it seems a waste of space giving it its own button. Thankfully, you can easily disregard it – unless you accidentally hit it when you’re trying to lower the volume. There’s a SIM and microSD card slot along the top of the phone, and a headphone jack and mono-speaker flanking the USB Type-C port on the bottom.

Just like the S7, the S8+ is IP68 rated for water-resistance and can be submerged in 1m of water for about 30 minutes. Unlike the S7, however, Samsung has ditched those hardware buttons and gone virtual. The home button even features a haptic response and can be accessed from anywhere by just pushing down on the lower portion of the display. 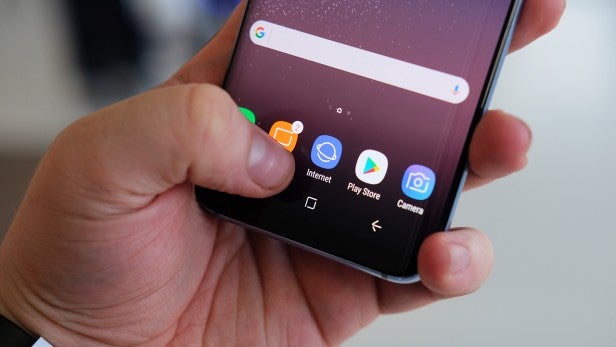 My review unit is the ‘Midnight Black’ option, and it’s a deep black all over, with slightly shiny sides that blend into the display. The phone feels like one complete piece, with the glass, screen and metal all combining seamlessly.

The S8+ is available in an equally attractive ‘Orchid Grey’ option, too, which is light grey with a hint of blue and a black front. I’m glad to see Samsung ditch the white front completely, especially since it would have detracted from the “infinity” look it’s trying to achieve. 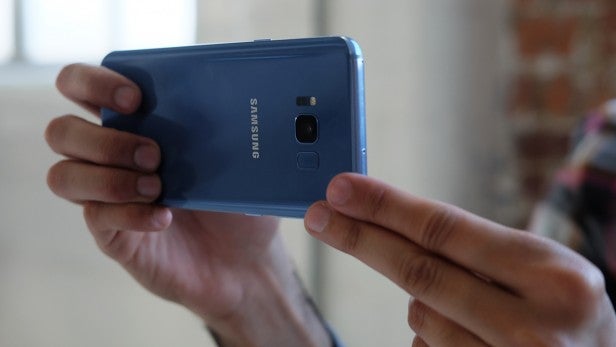 A word of warning: it would be wise to invest in a case for the Galaxy S8+. Even though there’s Gorilla Glass 5 on both the front and back, this is a delicate phone and I can’t imagine that things will end well if you drop it on a hard surface. I’ve been using the official Alcantara case and it’s suitably slim, plus it improves accessibility of the fingerprint sensor by separating it from the camera.

The display is arguably the most striking part of the Galaxy S8+, and it’s the feature that really sets this device apart from the competition. In my review of the Galaxy S8, I said the handset made me feel excited by phones again – and that’s mostly down to the display.

There’s no Edge variation this year, and that’s because both the S8 and S8+ sport those eye-catching curved sides. They’re not as steep as before, though, and as such are more of a design trait than a practical feature. If you were put off by the edges on the S7 Edge, don’t let that sway you here.

Samsung has also further optimised its software to do a better job at rejecting accidental touches along those edge portions of the handset, something that was needed. 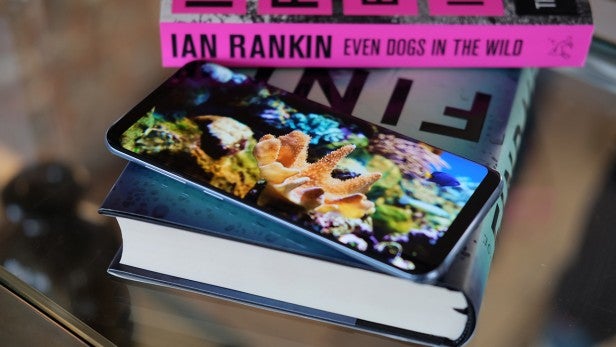 Also striking is how the display is pushed to almost each corner of the device. There’s no chunky bezel and this results in a big change to the aspect ratio. Most phones use the typical 16:9 aspect ratio, but the S8+ pushes that to 18.5:9. This gives the screen a taller look, and a narrower feel.

If you’ve ever used a Samsung flagship before then you’ll know they always have excellent displays, and the S8+ is the best yet. It’s an AMOLED panel, with a resolution of 2960 x 1440, and it’s the only phone so far to have been ‘Mobile HDR Premium’ certified by the same UHD Alliance that will certify HDR TVs. HDR (high dynamic range) is a big step up for televisions, offering better contrast and a brighter picture – and while it’s great to see it trickle down to phones, neither Netflix or Amazon Prime have updated their apps to support it yet.

As with any AMOLED panel, the best attribute is the colour reproduction. It will display the deepest black and brighter shades such as red and green are gloriously vivid without being oversaturated. Like the iPhone 7 and 7 Plus, the Galaxy S8 can display the entire DCI-P3 cinema-grade colour gamut – and, in certain cases, it will go beyond 1000-nits of brightness.

Interestingly, out of the box the phone defaults to 1080p rather than 1440p. I assume this is to save battery, but it looks good nonetheless. Although, if you’re happy spending £700+ on a phone then I’m going to assume that you’ll want to get the most out of it. You can hop into Settings to up that resolution.

The screen is a joy to use outdoors as a result of that impressive brightness, and even though the curved edges do reflect the sun a little more than would be the case with a flat screen, it certainly isn’t something I notice regularly.