Whether you’re an adventurous sporty type that regularly engages in aquatic activities or an unlucky soul prone to accidents, a decent IP rating is a key assurance you should look for when buying any smartphone, earphone or wearable.

But with so many different IP codes around, knowing what each rating specifically means can be a little tricky for even the most tech savvy of buyers. What’s more, misunderstanding the exact guarantee an IP rating infers can be a costly mistake as there’s a big difference between water resistant and waterproof.

Here to make sure you know exactly what each IP rating means we’ve created this definitive guide detailing everything you need to know about the certification.

What is an IP rating?

An IP rating is a certification proving a product meets a certain standard of water and dustproofing/resistance.

Each classification requires a company to build its product to meet a standard set by the authority and submit it for inspection. The specific requirements depend on each exact code being targeted.

The process requires the manufacturer to pay for the classification/tests to be done, which is why many companies choose to not submit some products.

This is particularly common in the world of smartphones, where key companies including OnePlus, Xiaomi and Oppo have opted not to pay for classification in a bid to keep costs down.

The OnePlus 8 Pro was the first phone from the brand to carry the certification when it arrived earlier this year. The hotly anticipated OnePlus 8T family is also expected to carry an IP rating.

It’s a more common site at the top end of the phone market. The Galaxy S20 carries an IP rating and the iPhone 12 is expected to as well when it arrives later today.

Outside of phones an IP rating is also a common site on most wearables and headphones. Though the latter generally sticks to lower IPX4/7 ratings, which only guarantee minor sweat and splash proofing.

Outside of this the most common standards you’ll find on most spec sheets are IP67 and IP68. These are the ones targeted by the majority of phone and wearable makers. Though the difference in certification sounds small, there are a few key factors differentiating the two. Here’s what you need to know.

Firstly it’s worth noting that there’s a difference between being waterproof and water-resistant. Waterproof means something is impervious to water regardless of how long it is submerged, water-resistant means a product can stop water entering it to some degree, but not entirely. When we’re talking about smartphones and smartwatch it’s almost always about how water-resistant they are. They can’t survive in water indefinitely.

IP is the name of the standard that was drawn up by the International Electrotechnical Commission (IEC) to determine how resistant an electrical device is to fresh water and common raw materials – like dirt, dust and sand.

The first digit after IP is the rating the IEC assigned a unit for its resistance to solids. In this case, it’s six – which means no “harmful” dust or dirt seeped into the unit after being in direct contact with the matter eight-hours.

Next, we have the water resistance rating.

There are two leading ratings at present – seven and eight, with the former meaning that the device can be submerged in up to one meter of fresh water for half an hour, and the latter up to 1.5 meters for half an hour.

And that’s how IP ratings are formed.

To recap: IP67 means the unit can be dropped into a body of water up to a meter deep for half an hour, while IP68 guarantees protection in water up to 1.5m deep for the same period of time. Both are resistant to dust.

IP67 vs IP68: Neither means you can dip your phone in your pint

Let’s be clear here: the rating the International Electrotechnical Commission assigns is strictly for fresh water. That means it doesn’t guarantee protection from submersion in other liquids – beer, coffee, salt water and soda, to name but a few.

So if you spill a pint of your favourite lager on an IP67 or IP68-rated handset and quickly shake it off, it should be fine, albeit a little smelly and sticky. But if you leave it to rest in the goop for a prolonged amount of time, it could break… for good.

We wouldn’t recommend swimming with your phone. When the IEC tests a smartphone it’s done under lab conditions, with the handset in standby mode – not in a swimming pool full of various chemicals used to cleanse the water.

The same applies to the ocean. Seawater is full of salt, a mineral device-makers stress isn’t tested when the unit is being put through its paces for an IP rating, so we’d also strongly suggest steering clear of that.

In 2015, Sony released promotional photos showing a new IP68-certified Xperia handset being used to take a picture underwater. It later controversially altered its stance, warning buyers not to use the device underwater after numerous reports of damage emerged. 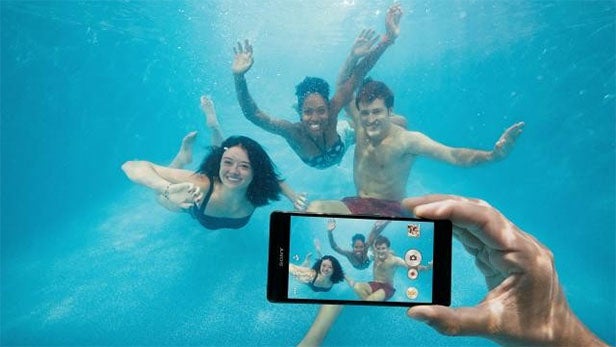 IP ratings are not bulletproof: Always read the small print

The type of liquid resistance guaranteed by an IP rating is one of many possible caveats. Companies often put specific exceptions to water resistance in the fine print.

The Apple Watch 3 is a prime example. Even though it’s listed as being able to survive light submissions, but the company explicitly warns it should not be used in “high velocity” activities, such as jet skiing.

These sorts of specific warnings are very common, so you should always make sure to read a product’s fine print before investing in it specifically because of its IP rating.