While the previous Echo Dots were cheap ways to extend smart home control all over your home, they weren't the most attractive devices and had weedy sounds. The Amazon Echo Dot (3rd Gen) as a vast improvement on the originals, even though it costs exactly the same. The new finish looks fantastic and the new Echo Dot is a device that you'd happily put out on show. Audio has been dramatically improved, too, both in terms of quality and loudness, which makes Alexa easier to understand and means that the odd bit of music or radio is a possibility. If you're looking to put Alexa in more rooms, then this is the device to buy.

What is the Amazon Echo Dot (3rd Gen)?

For smart home control and filling your home with Alexa devices, the Echo Dot has always been a popular choice. The old versions had two main problems: they were a little ugly, and a little quiet. With the Amazon Echo Dot (3rd Gen), Amazon addresses both issues, delivering an improved smart speaker that’s ideal for home control and a little bit of light music or radio.

Since the product was launched, Amazon has also released the new Echo Dot with Clock, which is effectively the same model only with an LCD screen to show the current time. Both products are available side-by-side, so it’s a matter of first deciding if an Echo Dot is the right model for you and, if it is, which model best suits you and youor home.

Gone is the plain plastic case of the old version, and the Amazon Echo Dot (3rd Gen) has a textured material case, which makes it closer in appearance to the Google Home Mini. It’s a vast improvement over the original, letting the new Dot blend in with your décor, rather than sticking out as an obvious bit of tech. Available in charcoal, grey and sandstone, there are now three choices of finish to further extend the options. 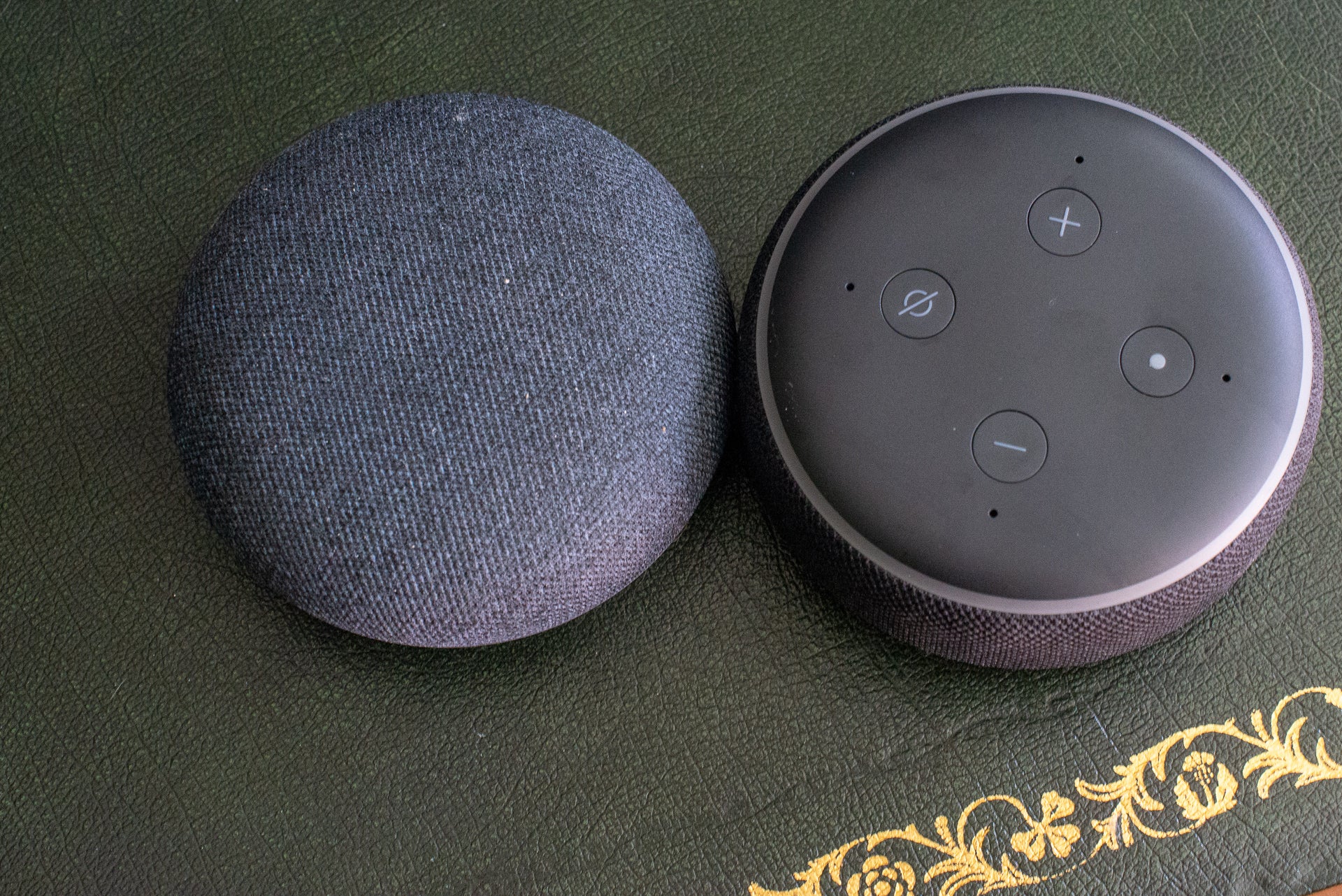 On top, you get the same control as on the previous Echo Dot: there are volume buttons, a mic mute button to stop Alexa listening in, and an activation button, just in case the Dot doesn’t want to pick up your voice. While physical controls are useful to have, most of the time you won’t need them. 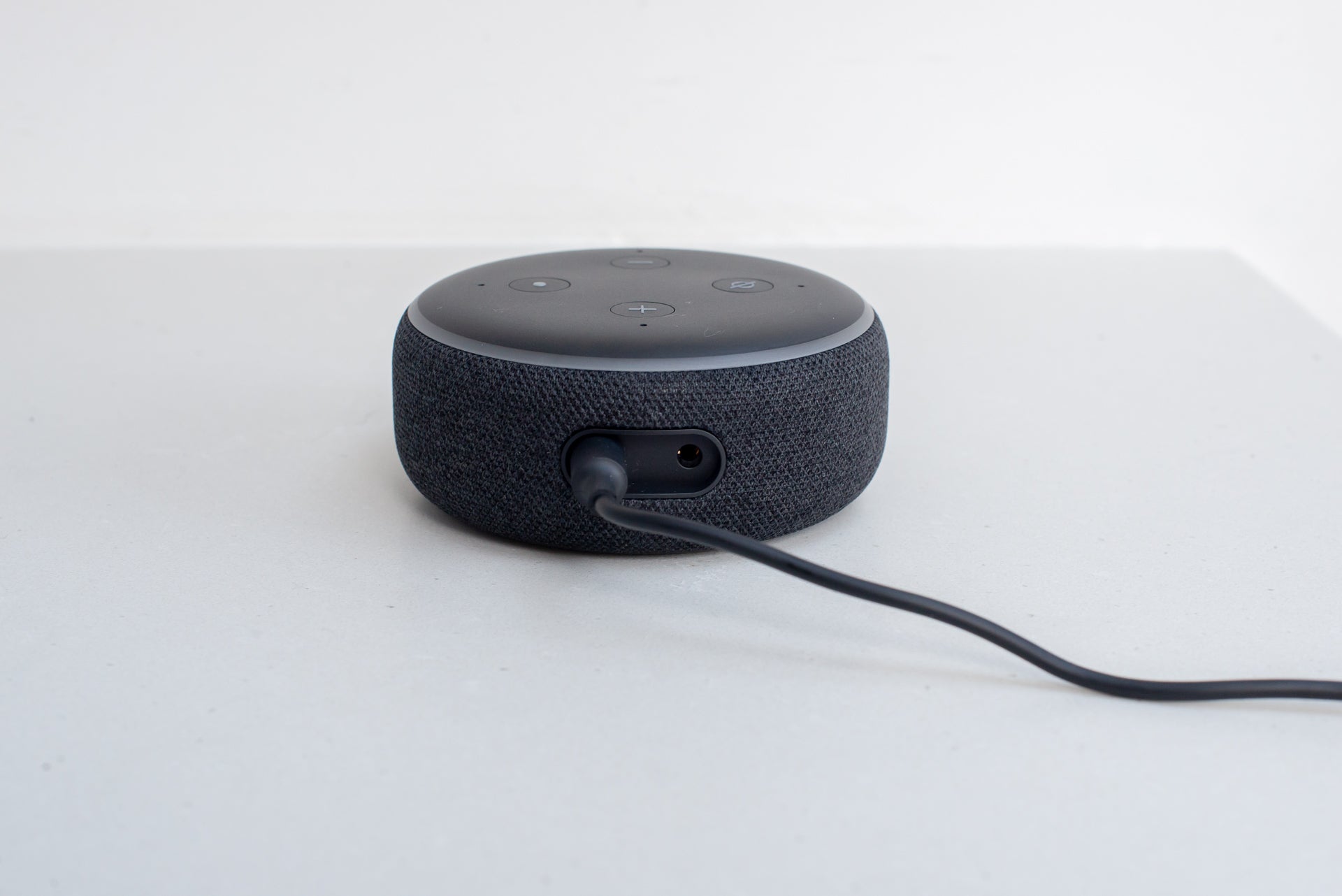 Amazon has changed the power adaptor for the Amazon Echo Dot (3rd Gen), and it’s no-longer USB-powered. This is because the new model needs a little more power. The downside is that you can’t power the speaker via a handy USB port on the back of your TV or set-top box.

There’s a 3.5mm audio output on the rear, so you can hook the Amazon Echo Dot (3rd Gen) up to a stereo for more powerful sound (or you can use Bluetooth for this). To be honest, if you want to do this, the cheaper Echo Dot (2nd Gen) would be a better choice, or hold out for the Echo Input (coming soon), which doesn’t have a speaker and plugs straight into an external device.

As Alexa works in the cloud, the 3rd Gen Echo Dot has the same range of features as the other Amazon-powered smart speakers. I’ve covered this in more detail in my Amazon Alexa Guide, but I’ll tackle the basics here.

As a general smart assistant, the new Echo Dot is a handy tool. Alexa can tell you about the upcoming weather or give you IMDB scores for TV shows and films. You can get details on upcoming appointments, or find out the results for sums or spellings. As far as the basics go, Alexa has you well covered. Additional features are added through Amazon Alexa Skills, with a huge number available through the Alexa app. The range is rather varied, with some excellent additions and some very poor ones; experimenting and finding the Skills you want is part of the fun.

Smart home control is where Alexa really shines, with the range of supported products huge, ranging from the Dyson 360 Eye robot vacuum cleaner to Philips Hue bulbs and beyond. You can create routines to control multiple devices together.

Related: How to make Alexa routines

For smart home control, the Echo Dot makes a lot of sense, as it’s cheap enough and discreet enough to place almost anywhere in your home where you want voice control. Amazon now uses four far-field microphones in the Echo Dot (3rd Gen) compared to the seven in the previous generation (one by each physical control). That sounds like a step backwards, but it isn’t. Across the room and from any angle, the Echo Dot (3rd Gen) picked up my voice inputs almost every time. 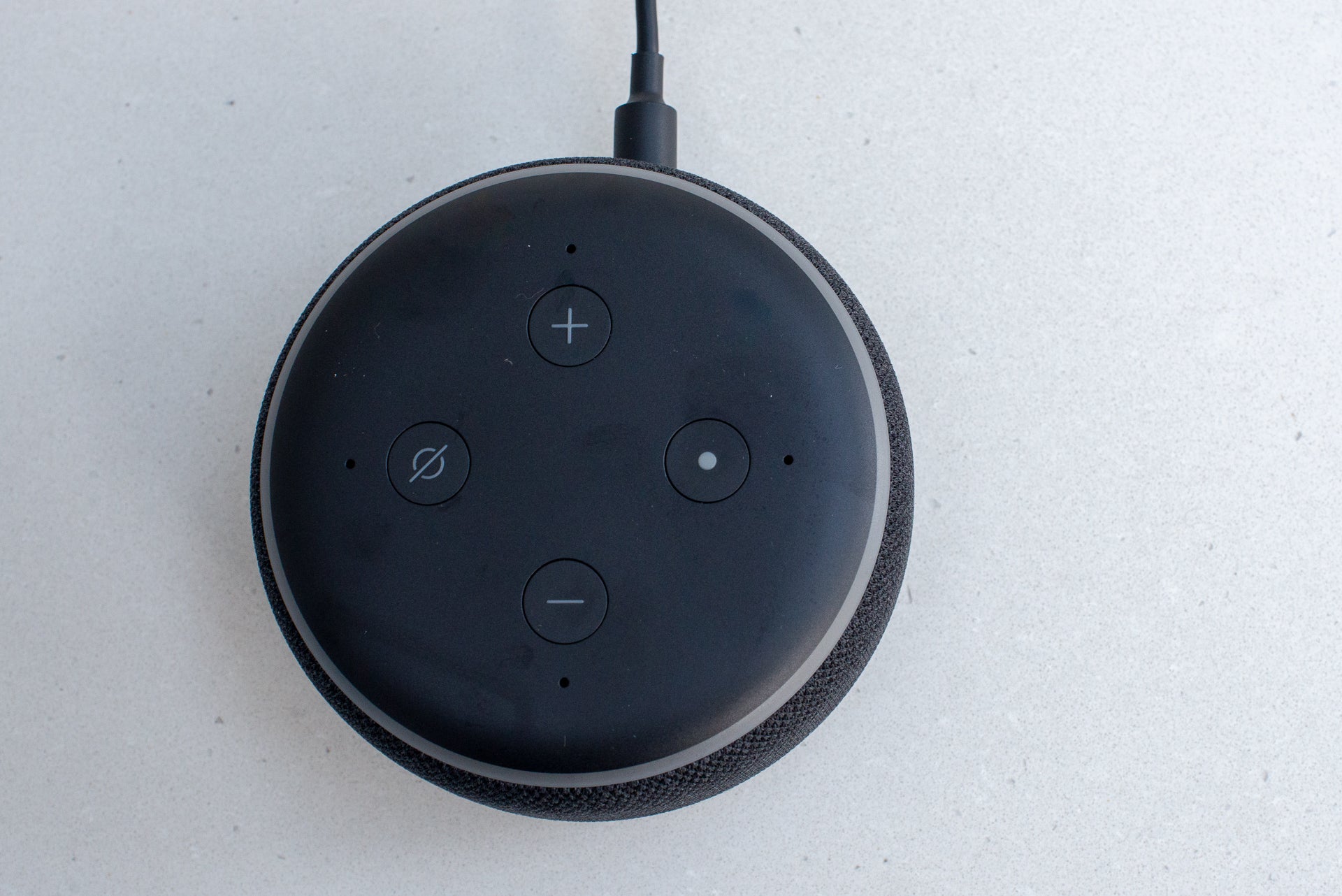 Going for a more difficult test, I placed the Echo Dot right next to a TV turned on at a regular volume. Sitting in close proximity to a TV like this causes problems for smart devices, but the Echo Dot (3rd Gen) did better than the older product. Sure, I need the odd vigorous shout of ‘Alexa!’ to wake up the Dot, but the 3rd Gen product responded more often than the older one.

That said, it makes sense to place your Echo Dot away from direct, consistent noise, as it does confuse the voice recognition and make things unnecessarily hard.

The previous generation Echo Dot’s sound quality could be described as functional. For Alexa’s voice responses, the sound was fine but you wouldn’t want to play music on it. This time around, Amazon has put a lot more effort into making the Echo Dot (3rd Gen) sound good. And it works.

For starters, the new Echo Dot is louder than the old one. Alexa sounds clearer, too. From providing the latest weather to news headlines, the extra clarity is welcome and the new Echo Dot makes Alexa a lot easier to understand. The change also makes voice calls between Echo devices a lot easier to make and understand, too. Given how much the Echo Dot relies on producing speech, the upgraded audio is welcome.

When it comes to music the 1.6-inch speaker in the Dot (3rd Gen) is a lot punchier than the old one. There’s definitely some bass in there, and the overall result is actually pretty good for the size of the speaker; it no longer sounds like you’re listening to music on a cheap phone’s external speaker.

That’s not to say that you should get too carried away. Audio tends to get rather compressed in the middle without a lot of range, so you’re left with a bit of bass and a slightly harsh high end. Really, you can’t expect a lot more given the Echo Dot’s small dimensions. But for occasional music or listening to the radio, Amazon has made a product that does either job well and I no longer felt myself wishing I had an external set of speakers.

You can boost the sound quality even further. If you make a stereo pair (see, how to create an Amazon Echo stereo pair for more information) you can get proper stereo separation, using one Echo Dot for the left channel and one for the right channel. You can even add a Sonos SUB to improve the bass. Both tricks work to a degree, but the slightly limited audio of the Echo Dot means that you get marginal improvements and it’s better to use the more powerful Echo devices in these modes.

If you do want to listen to music more regularly, then the current Amazon Echo is a better choice, or even better still, go with the Sonos One. If you want to keep it in the Amazon family, two Echo Plus (2nd Gen) speakers and a SUB make a great mid-range system.

Should I buy the Amazon Echo Dot (3rd Gen)?

Launching at the same price as the older model, the Echo Dot (3rd Gen) is simply a better product. It looks a lot nicer to the point that I didn’t feel like I had to hide this speaker away, and it sounds a lot better. OK, the sound quality isn’t so good that you’ll want to throw away your current speakers, but improved audio improves the Alexa experience a lot. 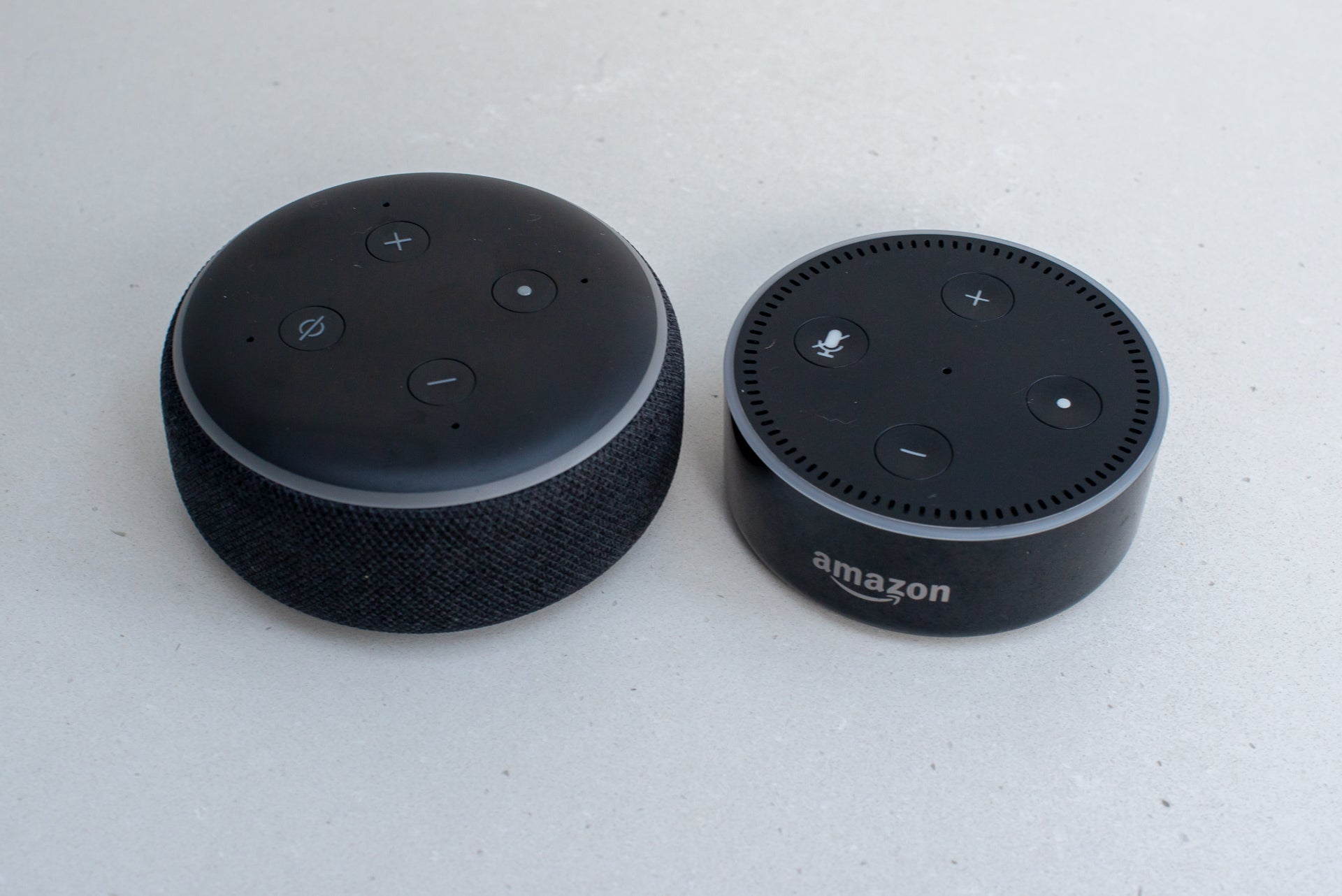 There’s another competitor from the same company: the Amazon Echo Dot with Clock. It’s a product where the name tells you everything that you need to know; this is an Echo Dot 3rd Gen that has an LCD screen to show you the current time, plus timers and alarms. The Dot with Clock has the same performance as the regular one, and you can mix and match the two speakers if you want to make a stereo pair of speakers. However, the Dot with Clock makes more sense in rooms where you could do with a clock: it’s a compelling bedside companion or a great addition to a kitchen.

The Echo Dot with Clock costs £10 more than the regular Echo Dot 3rd Gen, but that money is well spent if you’re going to use the clock; if you’re not, then you might as well save the cash and buy the regular model.

The only other choice is the Amazon Echo Input. This is basically an Echo Dot only without the speaker part. It’s designed to plug into your existing stereo or Bluetooth speaker, turning the dumb into the smart. Ditching the speaker makes the Echo Input a little cheaper than the Echo Dot, but it’s only worth buying if you really will never want to use the device standalone. For most people, the simple convenience of the Echo Dot (3rd Gen) makes it a top choice.