While it doesn’t resolve all the inherent issues with robot vacs, it’s the first model I’d happily recommend to a friend. It’s powerful enough to clean well on all surfaces, smart enough to navigate efficiently, and simple enough for anyone to use. 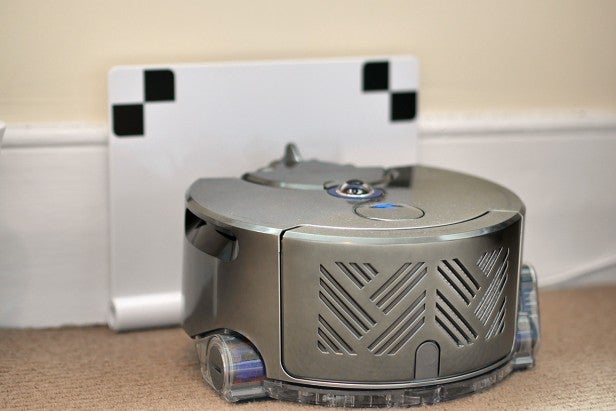 Setting up the Dyson 360 Eye is easy. Just plug in the pleasingly discreet A4-size charging dock, drop in the already assembled robot vac and, when it’s charged, hit the button on its top to start cleaning.

Okay, there’s a little more to it than that. You’ll need to make your home robot-proof first, by which I mean “tidy”, but the instructions are excellent. Things become marginally more complicated when you setup the Dyson Link app – more on that later – but first, let’s take a closer look at the robot itself.

The Dyson 360 Eye is a neat little unit: smaller, yet taller, than rivals. It’s slightly narrower than an iPad Air and about as tall as seven DVD cases stacked on top of one another; it’s small enough to go places that most robot vacs can’t. On the flip side, it’s too tall to fit under the majority of sofas and beds – it managed to get under my bed, but sofas are out of the question.

But it isn’t this Dyson’s size that’s the most interesting design feature, it’s the 360-degree camera that inspires the name. It transforms this robot from a glorified dodgem to a self-driving dust-sucker of doom.

With one or two exceptions, robot vacs rely on a “bump and move” approach to get around: they bump into things, then find a way around them. Sensors detect steps and some models, such as the Roomba 880, employ acoustic sensors to detect the dirtiest areas. However, they’re essentially blind mice sporting digital whiskers and pre-programmed behaviour.

The Eye 360 isn’t blind. In fact, it sees in every direction simultaneously, which helps it to not only map out where it’s going, but also to avoid obstacles. It still bumps into things now and again, particularly items below its eye line, but the Dyson knows where it’s going in relation to where it’s been.

Even when the Dyson bumps into objects, it’s less aggressive and less likely to damage your furniture as a result. It’s more a very British nudge or polite prod than a bump: “Awfully sorry, don’t mind me.” 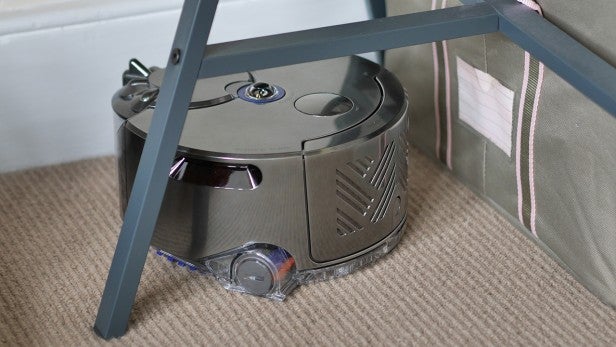 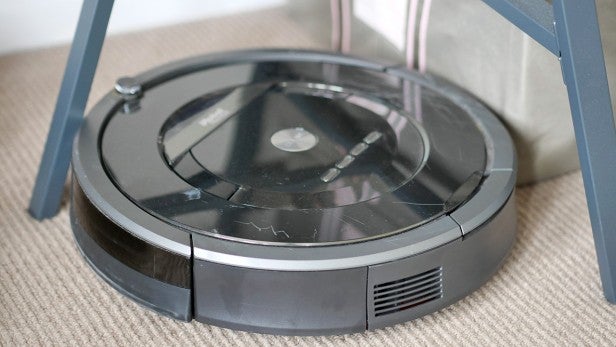 The Dyson fits into tight spaces easily, where the Roomba doesn’t.

Yet there’s nothing British about its approach to cleaning. It’s methodical, calculating and efficient – more D-Day landing than Brexit. It picks its starting point and slowly works its way outwards in squares, each time overlapping a little with its previous path so it doesn’t miss anything. Those wanting to keep an eye on what area it’s covered and how far it’s travelled can do so via the Dyson Link app.

The 360 Eye is impressively rugged and tenacious, too. Rather than wheels, it has two tilting tank tracks that tackle elevation changes with ease. It navigates my deep pile – and exceedingly cheap – Ikea rug with ease; my Roomba 880 often treats it like an obstacle and makes its way around it. It’s the Land Rover of robot vacs, but modern and reliable. 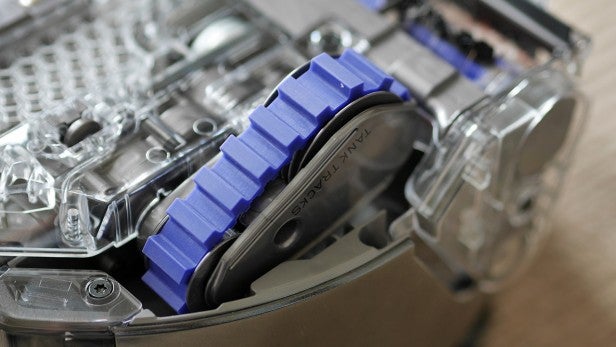 Anyone familiar with robot vacs will also notice the Eye 360 lacks the spinning side brushes that are common on many rivals units. These are intended to flick dirt into the path of the vac, particularly along skirting boards.

In my experience they work fine on hard floors but less so on carpet, merely flicking larger debris into the cleaning zone, while bypassing any dust ingrained into the carpet. Even the most ardent robot vac fan will admit that these brushes are little more than a practical, but inelegant, bodge.

The Eye 360 doesn’t need brushes because the cleaning brush bar runs the full width of the cleaner – the below comparison with the Roomba 880 illustrates the difference. This is especially useful when cleaning tight spaces and along borders, since there’s no danger of the vac missing a spot. 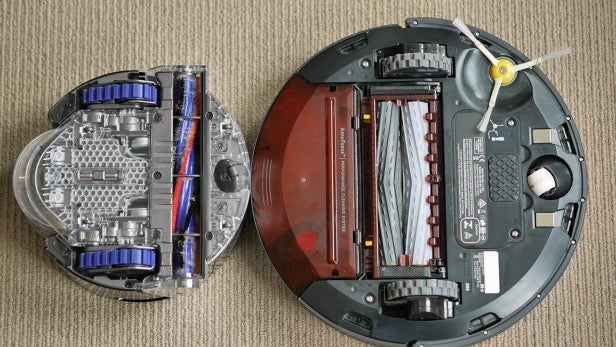 That said – and I’ll get into this in more detail on the next page – the Dyson isn’t as proficient at following skirting boards closely. Moreover, beyond closing doors and other physical barriers, there’s no way to limit where the Dyson goes.

Rivals employ magnetic strips or beacons to create no-go areas, such as avoiding a children’s play area or pet litter, which is handy. While this isn’t quite a deal-breaker as far as the Dyson is concerned, it does put a greater demand on keeping your home “robot ready” at all times.

You’ll need a “robot ready” home if you decide to set up a regular schedule, which is controlled by the Dyson Link app. It’s a simple enough application, although arguably it’s one of the weaker parts of the package.

While setup isn’t complicated, it could be simpler. For reasons I don’t entirely understand, Dyson requires you to connect directly to the vac’s own Wi-Fi network during setup. This means leaving the app, inputting the password – printed on the manual and on the vac itself – then returning.

In contrast, smart devices such as Netatmo Welcome simply ask you to enter your Wi-Fi’s password in the app and work out the rest. It’s a small point and although the process is well explained, it still took me two attempts to ace the setup.

The app itself, which acts as a hub for Dyson’s other Wi-Fi-enabled products, ignores gimmicks in favour of simple and useful features. You can start and end cleaning sessions remotely, control the cleaning schedule, and view what your robot did in each session. That’s it. 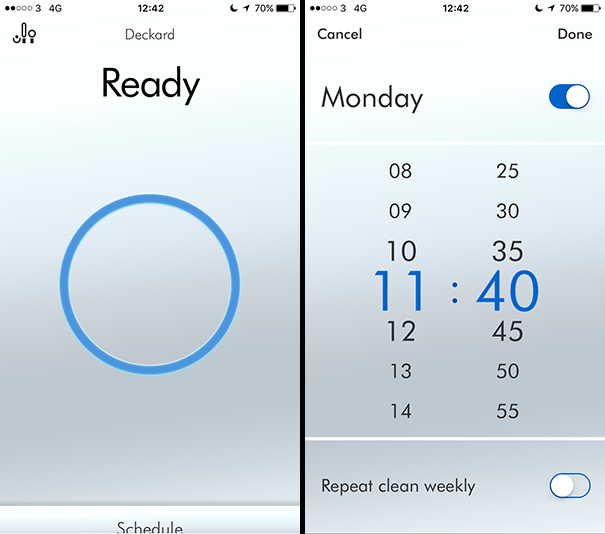 There are no “spot cleaning” or manual control modes because the 360 Eye doesn’t need them. It’s powerful enough to get the job done in a single pass; and picking up a normal vacuum is easier than navigating to a specific point. Indeed, picking up the Dyson and pressing start is simpler too.

I’m a huge fan of the activity maps. They show the route your robot took (mine’s called Deckard), the distance travelled, and the number of times it charged during the session. If your 360 Eye can’t cover a whole floor on a single charge, it returns to base and resumes once charged. 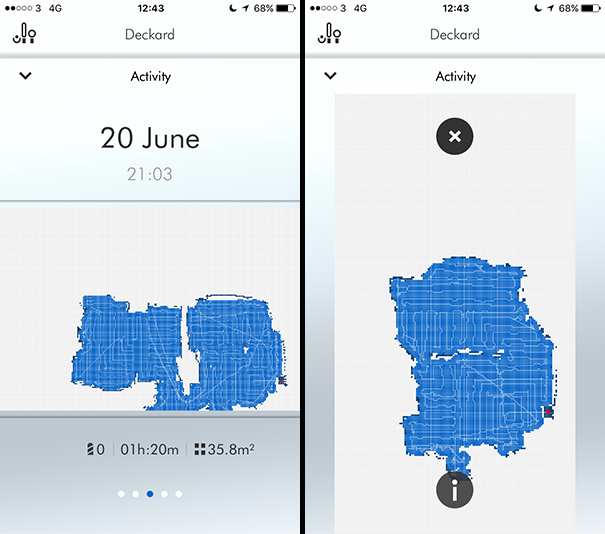 However, I don’t love the app’s unreliability. It isn’t a deal-breaker but I’ve often been greeted by the “App offline” message on first launching the Dyson Link app. Force-quitting the app normally resolves the issue, but the spotty connection is an irritant.

Remote access via the Dyson Cloud seems to work fine, although I haven’t had much cause to use it. I generally prefer to run the 360 Eye manually than use the schedule, but that’s probably because I’m not tidy enough.