A neat way to add smart home control where you need it, the Google Home Mini is a great-looking mini speaker with tonnes of features but it lacks some of its rival's flexibility

What is the Google Home Mini?

With Amazon now on the third generation of its Echo Dot product, the Google Home Mini remains unchanged since launch. Far from that being a massive problem, there’s little reason for Google to have updated its mini speaker. If you’ve bought into the Google Assistant ecosystem, then the Home Mini makes a great deal of sense as a way of spreading out smart home control and putting the smart speaker where you need it.

While Amazon took a more functional approach with the first couple of Echo Dots, Google made the Home Mini look nice from the get-go (Amazon has since made a lot more effort with the 3rd gen Echo Dot). There are no hard edges – what you get is a large Babybel wrapped in various coloured fabrics. The only thing giving it away as a gadget is the microUSB cable it needs for power, and the LEDs that peek through the fabric at the top when the device is active.

Tucked away at the back is a small slider, which mutes the microphone. It’s a bit fiddly, though, and given it’s at the back of the device, I wish it had been just a button instead of a slider.

The top of the device is supposed to be touch-sensitive, too, but that doesn’t work any more. Apparently, a fault with the sensor tricked some units into thinking they were being touched when they weren’t, leading to those devices permanently listening for commands. That’s terrible for privacy, and as a result Google has permanently disabled the touch-sensitive top.

That means the only physical controls are volume, and you’ll have to rely on your voice to pause or play or fast forward music. Not ideal. 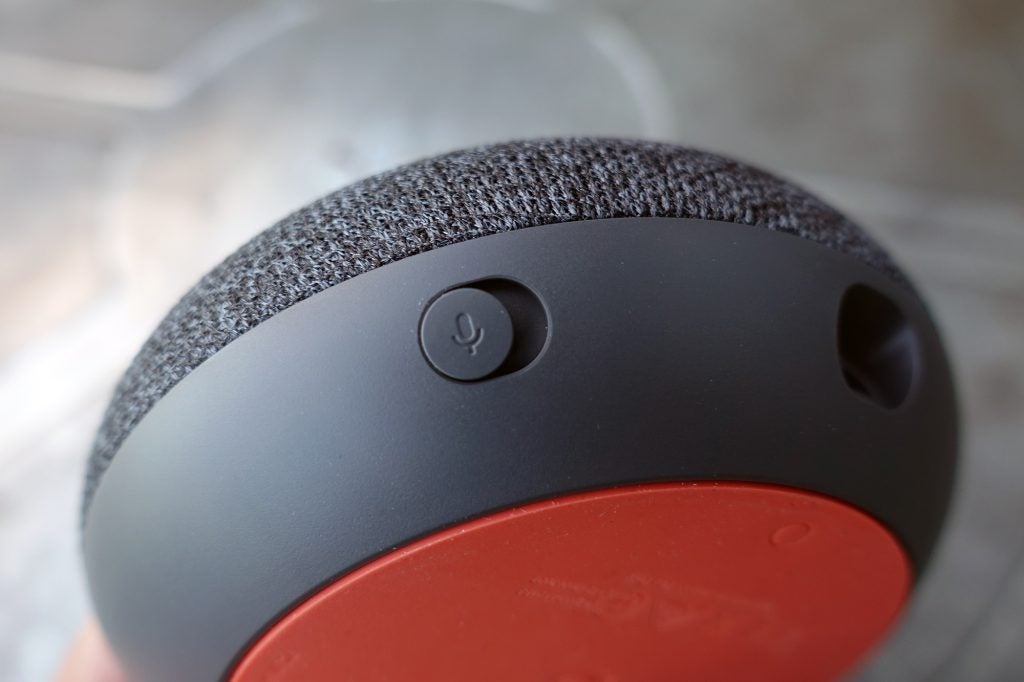 The Google Home Mini can do pretty much everything the big Google Home can do – this is covered in more detail in the Google Assistant guide. You can, of course, just treat it as a Bluetooth speaker and use it to play songs from your phone, but that wouldn’t be making the most of its potential.

It runs on Google Assistant, and you can use your voice to command it to do a whole lot of things. The most basic commands include setting alarms, making shopping lists and getting weather reports. It gets more interesting when you factor in smart home components, such as Philips Hue lightbulbs and Hive thermostats. It can also play music from a number of big-name services, such as Google Play Music, Spotify and TuneIn.

There are various advantages and disadvantages to Google Assistant compared to Alexa, but basically it comes down to this: Google is a bit smarter, but Alexa has better hardware support.

For basic searches, Google pulls data from its own search engine, while Alexa uses Bing. Google’s voice input is also more contextual and naturally conversational, while sometimes with Alexa it seems like you need specific commands to get what you want.

However, third-party support is a lot better for Alexa. Take Sonos, for instance – the biggest name in multiroom has chosen to lean heavily on Alexa. You can use Alexa to control old Sonos speakers, while the new Sonos One actually has Alexa built into it. Meanwhile, Google Assistant won’t be appearing on that speaker until sometime next year. 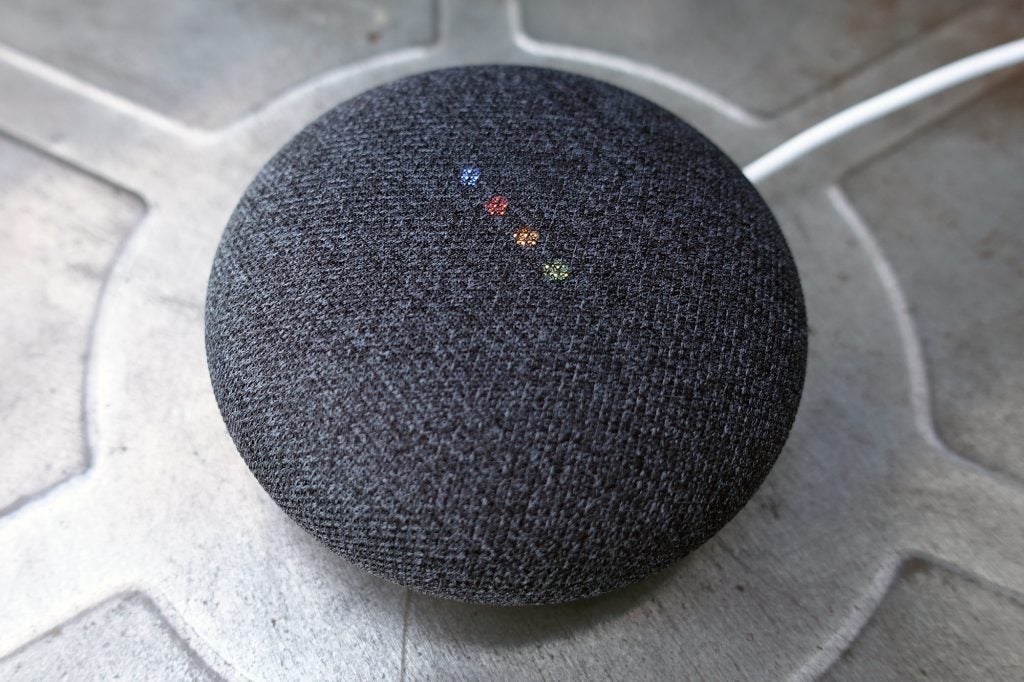 Alexa also has the advantage of letting you choose from four trigger words. You can’t do that with Google Home, although having to say ‘OK Google’ or ‘Hey Google’ is arguably better, as it results in the Home Mini going off by accident less than the Echo.

One unique trait of Google Assistant is that it works with Google’s existing Chromecast ecosystem, so you can cast music to compatible speakers. The Chromecast element also lets you set up a multi-room system – if you buy multiple Home or Home Mini devices, you can use them to play the same music throughout your house

Google Assistant is also compatible with Android TV, which has Chromecast tech built in. That means you can use your voice to start your next Netflix binge.

All this Chromecast potential is almost enough to balance out the lack of a 3.5mm output or Bluetooth output, both of which appear on the Amazon Echo Dot and the new Echo Input, which is designed specifically for connecting to smart speakers. I get a kick out of voice-commanding a proper big hi-fi system, and the Google Home Mini just doesn’t give you an easy way to do that.

Google has just launched hands-free calling in the UK, following an initial US launch. It lets you make free phone calls to UK mobiles or landlines directly over the internet; this is particularly handy if you don’t get a lot of voice minutes with your mobile plan, or for those times that your phone isn’t easy to reach. For convenience, you can set your Home’s caller ID to be your regular phone number using the Home app.

Call quality is excellent, easily equalling that of a traditional mobile call made with strong reception. Here, the Mini’s limitations aren’t so much of an issue, as this speaker is better than a regular phone’s hands-free mode, producing clear audio.

Google can pull contacts from your address book (with multiple users, each one gets their own unique contacts list), and you can also dial numbers found in local searches, such as the nearest pizza place.

Google is currently ahead of Amazon here, but it’s a shame that you can’t make voice calls between Google Home devices, as you can with Amazon Echo. The closest that Google has is with its broadcast option that sends a voice message to all devices connected to your account. 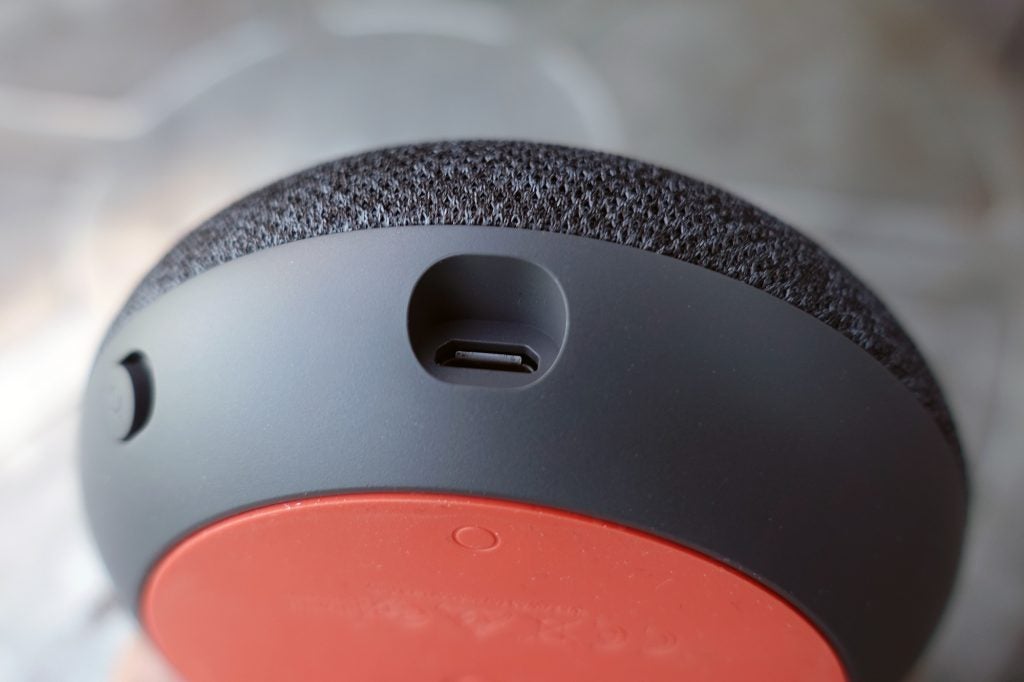 Sound quality isn’t great, but that’s to be expected from a device this small. These mini smart speakers aren’t really meant for music, although performance is fine for listening to the weather report.

The Google Home Mini is supposed to be a 360-degree speaker, but the performance is so weak that I can’t really imagine anyone crowding round it to listen. There’s hardly any bass to speak of, and if you turn it up, it won’t be long before you turn it down again out of tiredness.

It’s a marginally larger sound than the Amazon Echo Dot, but at least that has a 3.5mm headphone jack. Without that, or even the ability to pair with a third-party Bluetooth speaker, you are not able to outsource the musical performance.

Yes, there are workarounds – you can get a Chromecast-compatible speaker, but they are far rarer than Bluetooth ones. You can plug a Chromecast Audio (provided you had one before the product was discontinued) into a Bluetooth speaker and then cast to that, but that’s just unnecessarily complicated. Make no mistake, this is a smart device first and speaker second. 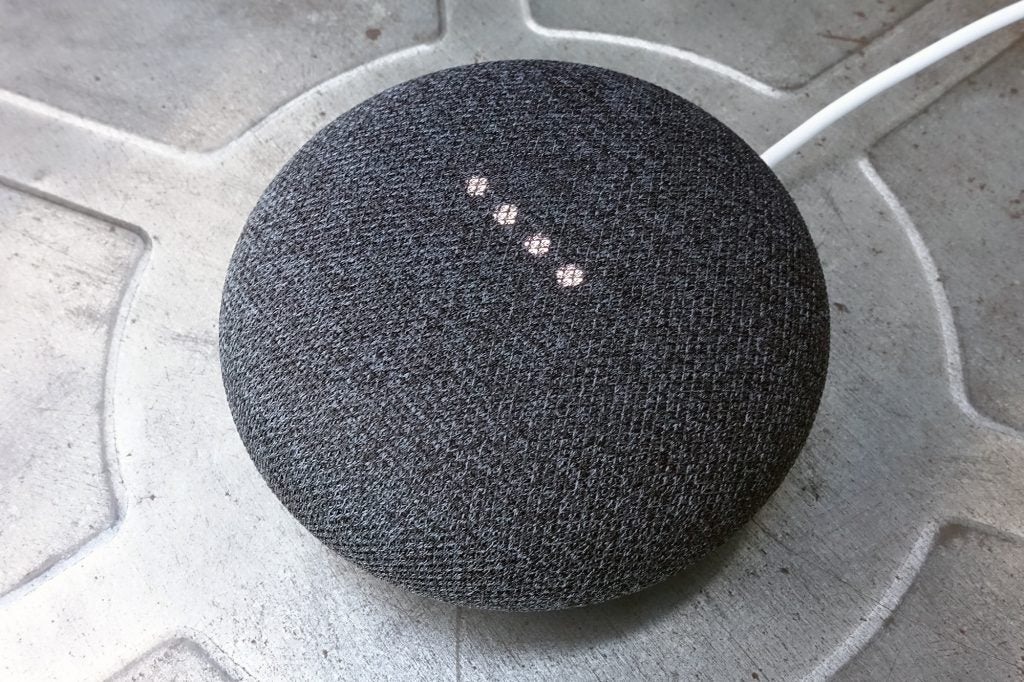 Why buy the Google Home Mini?

If you want to take your first step into the world of smart homes, and you want Google Assistant throughout your house, the Google Home Mini is an affordable way of making that happen.

The Amazon Echo Dot is more impressive on the hardware front, however. It offers more physical controls, and its audio output means it can be easily be turned into part of a larger audio system.