The 2017 Amazon Echo is a big improvement over the original: louder, better looking and a bit smaller, too

After launching the first – and most successful – personal assistant smart speaker, a follow-up was always going to prove a tough job for Amazon. Yet, a lower price, neater look and smaller body are all a great start for the 2017 version of the Amazon Echo.

The competition is tougher this time, though. The Google Home is now available in the UK, and there’s competition from within, too: the smaller and cheaper Amazon Echo Dot (2nd Gen), plus the screen-toting Amazon Echo Spot. The standard model is probably the best all-rounder, though.

Amazon has also expanded its range to contain the Echo Sub, a small subwoofer that boosts the low-end audio prowess of its speakers and makes the Echo range better competition to the likes of the Google Home Max or Apple HomePod. 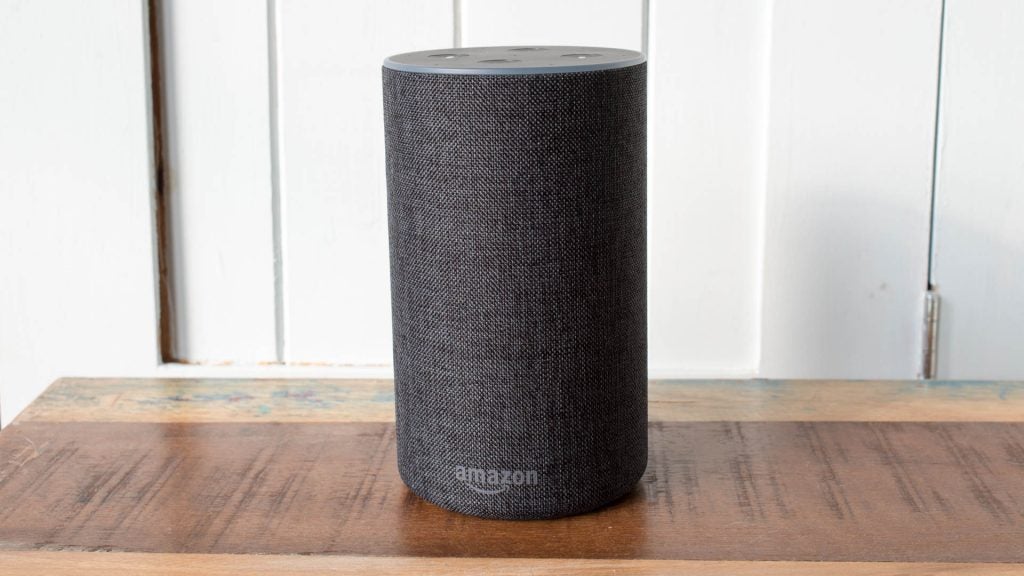 I’d describe the original Amazon Echo as more functional than stylish – but I rather like it. Nevertheless, Amazon has worked hard with the 2017 model to give it a fresh look and feel, and it will be far easier to find a place for this new model in your home.

For starters, it’s now available in a wider range of finishes. For £90, there’s a series of fabric-covered speakers, in charcoal, grey or sandstone colour options. It’s an attractive finish that gives the Echo a more high-end speaker look. Pay £100, and you get a choice of oak or walnut wood finishes, plus it also comes in silver. The former look great, and give the new Echo an interesting look; the silver finish doesn’t quite do it for me.

As well as offering up the Echo in multiple finishes, Amazon has also reduced its size. Standing just 148mm tall, the new Echo is around two-thirds the height of the original. With a diameter of 88mm, it’s 4mm wider than the original, although you’d be hard-pressed to notice from sight alone. This reduced size makes the new Echo that bit easier to place. 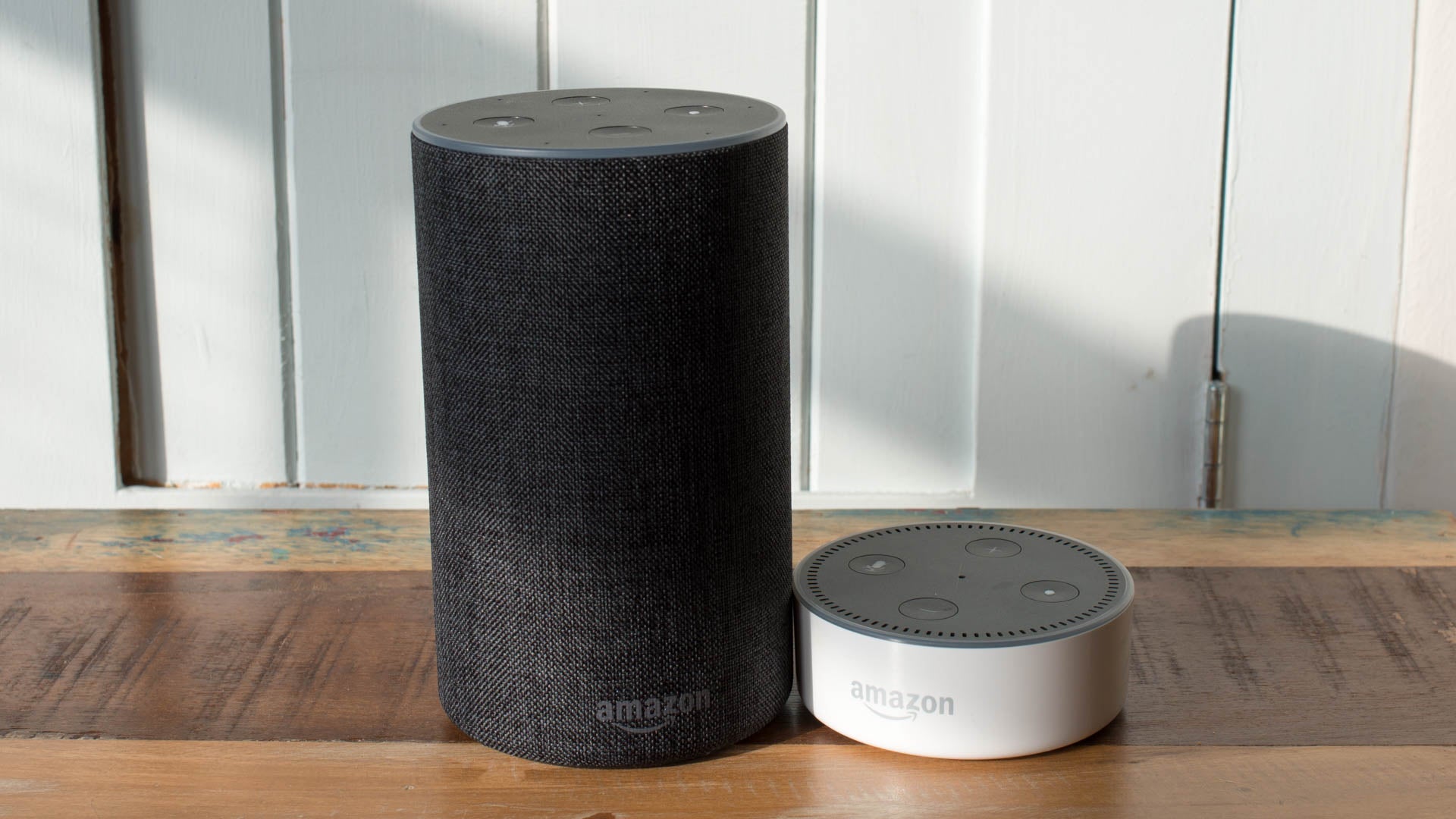 The reduction in price see the removal of the neat rotating volume dial of the original Amazon Echo. Instead, you get physical volume up and down keys, which don’t feel quite as premium. If you want the dial, you’ll have to opt for the more expensive Amazon Echo Plus. 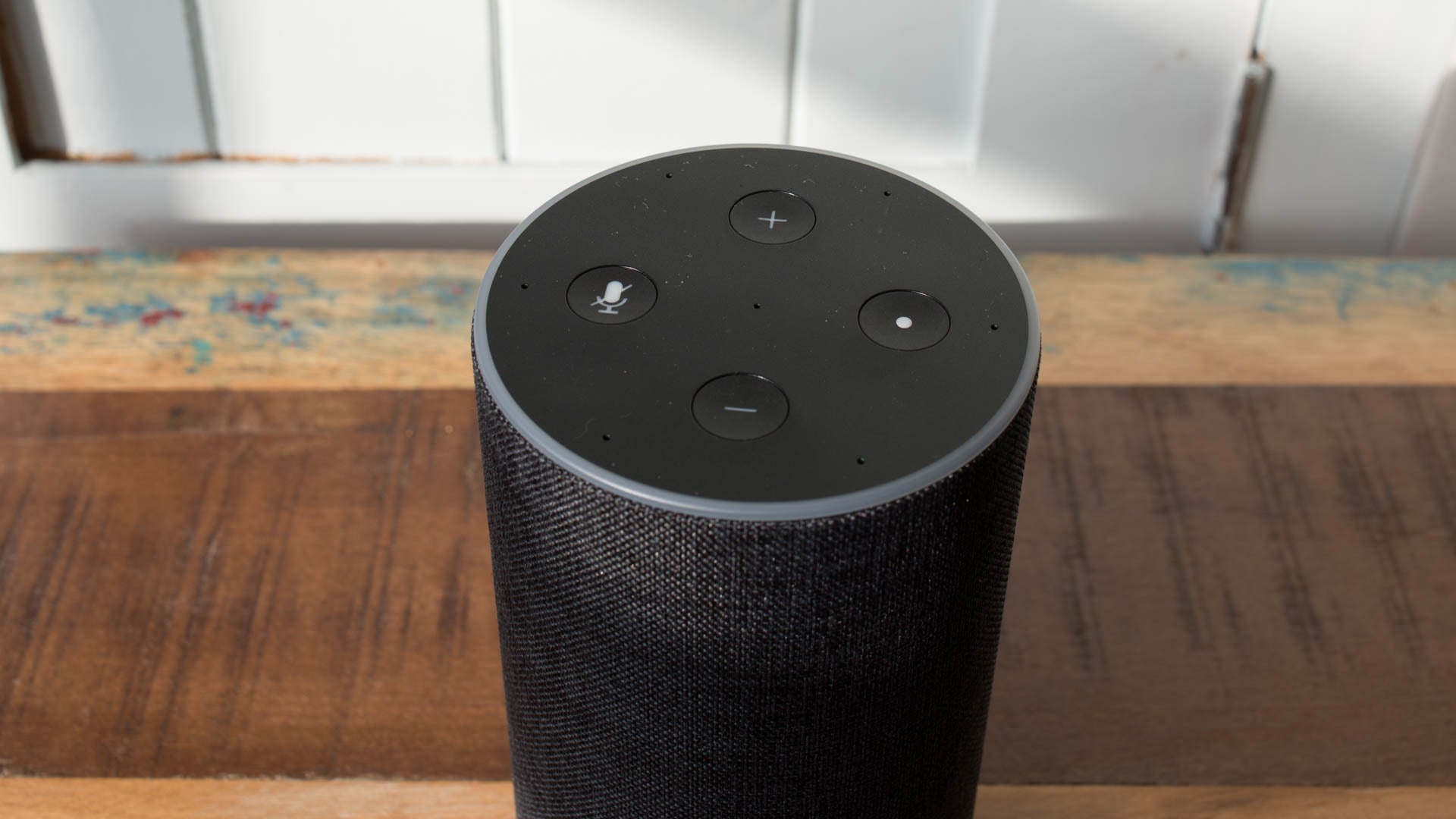 Around the back, there’s a power input and a 3.5mm audio output, so that you can hook up the Echo to an external speaker. Alternatively, you can use the built-in Bluetooth. To be honest, if you’re going to do that then you may as well save some cash and opt for the Amazon Echo Dot instead. As with all Amazon Echo devices, configuration of the 2017 Echo is via the Alexa app. Once you’ve discovered and paired your new smart speaker, the Alexa app takes you through connecting the Echo to your home network. This takes a matter of minutes.

If you have multiple Echo devices, it’s worth giving the new device a meaningful name. This will make it easier to use the new calling or drop-in features, where you can make voice calls between Echos.

Alexa is cloud-based, therefore she’s as smart – or as dumb – on this Echo as on every other device. Typically, I find that Alexa is great at standard questions, such as giving you a weather report and updating you on upcoming calendar appointments (she even talks to G Suite accounts, which Google Home can’t do). But, the Google Assistant is generally a little smarter and better at understanding natural language speak.

Alexa still has some rather big limitations. For example, you can only get a traffic update between two set locations (home and work); Google can give you traffic updates for any jouney. Key to the original Echo’s success was its smart home integration, with Alexa working with a greater number of smart devices than any other voice assistant around. The new Echo doesn’t add anything to the mix, but it maintains the same number of skills as all other Alexa-based devices – and you get access to the new Alexa app.

As a result, you can now control some devices directly from the app. Being able to control multiple devices from multiple vendors using one app is potentially very powerful, although Amazon isn’t quite there yet in terms of offering a complete experience.

For example, I couldn’t set my smart thermostat’s temperature, but I could use its quick actions. Light bulb support is better: I could turn a Hue light on or off and adjust brightness, and change itss colour. Nevertheless, it’s a move in the right direction. 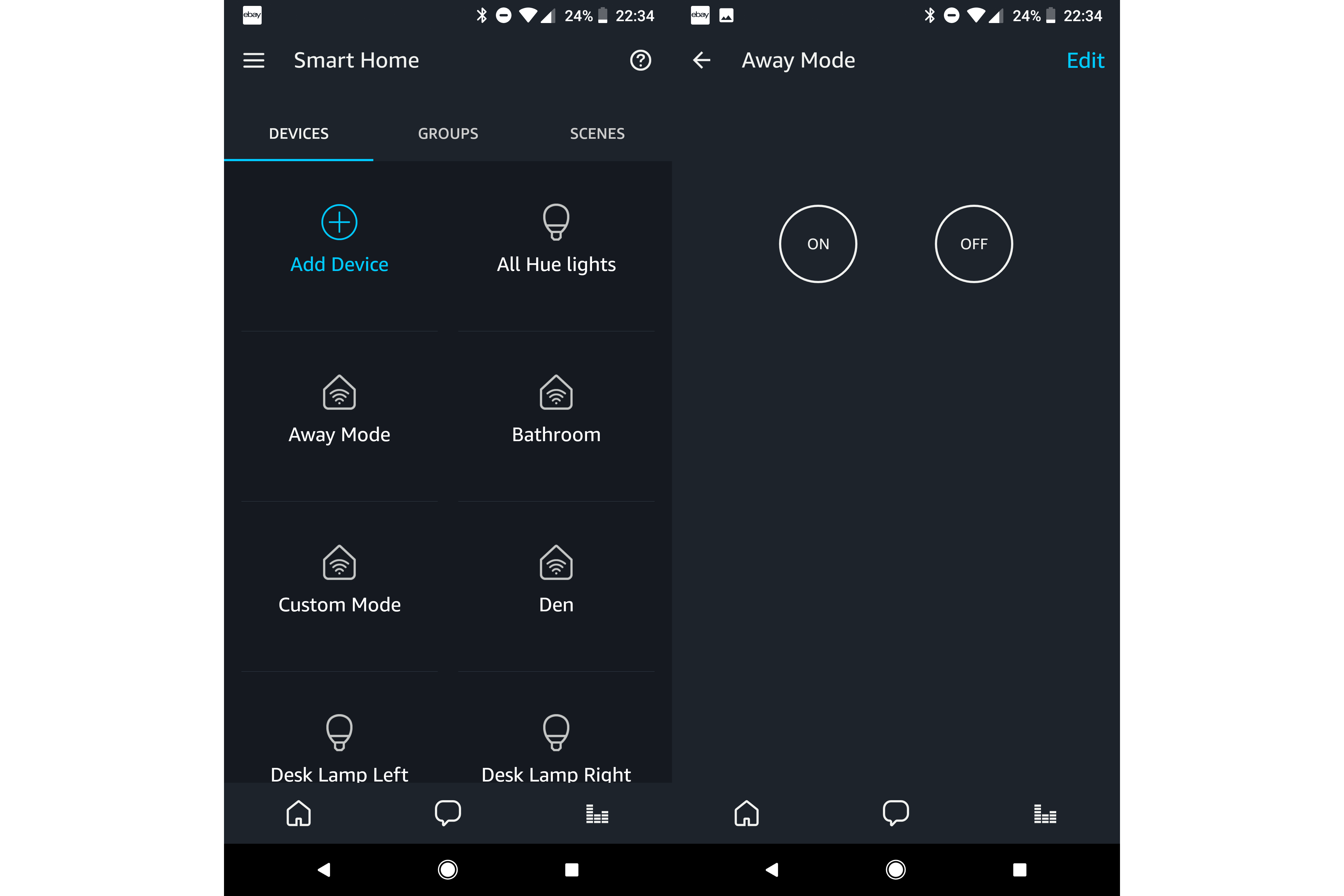 Routines are a neat new feature, and let you perform multiple actions after you use the set trigger phase. For example, in my home, saying ‘Alexa, goodbye’ turns off all of my smart lights and sets my heating to Away mode. 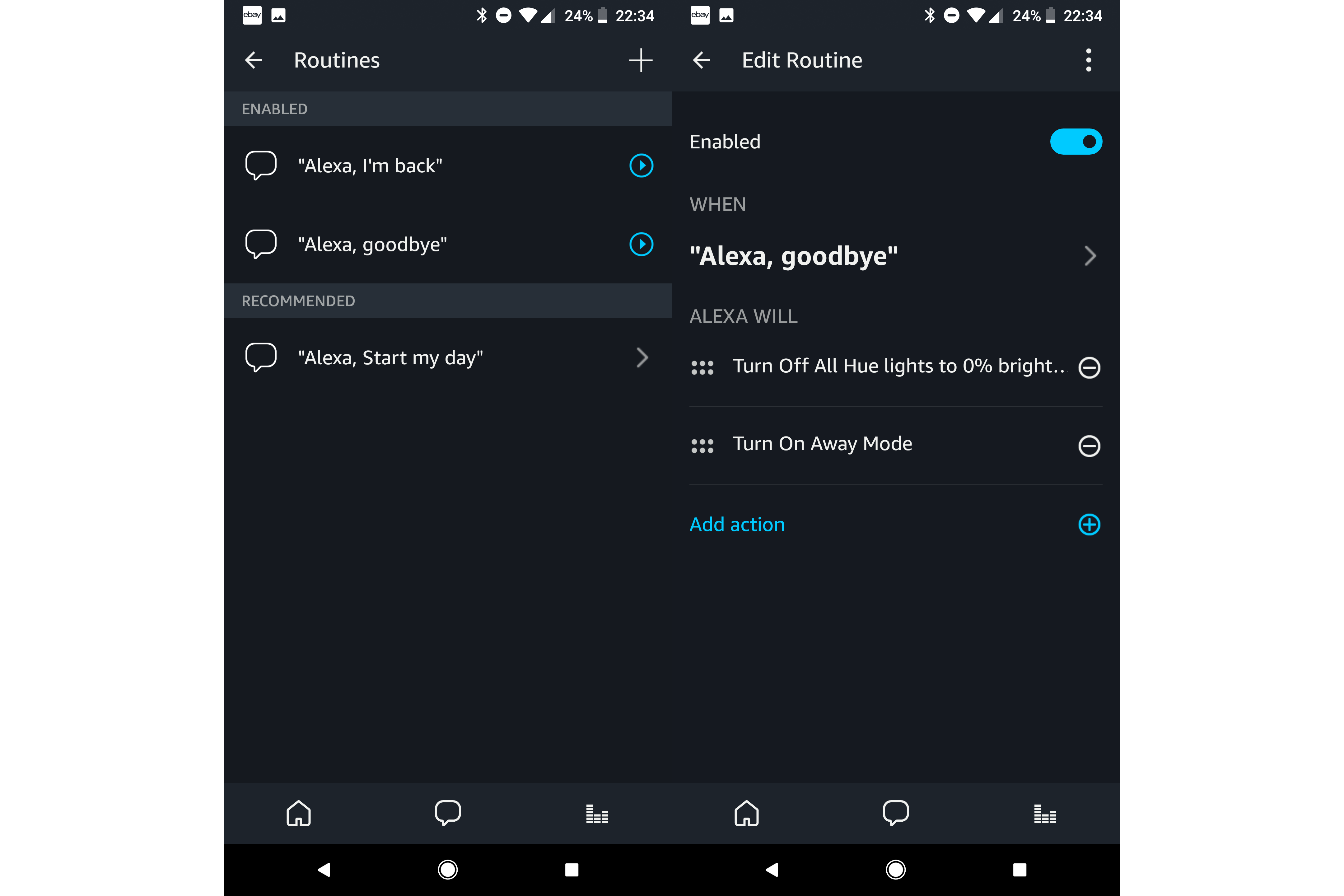 Overall smart device control has been improved, too. As well as grouping devices together, you can now rename them in the Alexa app. This helps avoid any potential naming clashes. But the main screen that lists your devices is rather basic, listing every device in alphabetical order, with no search or filtering options.

Still, when it comes to breadth of support, Alexa is the device to rule the smart home and the system is getting better with every update.

Amazon has fitted a 0.6-inch tweeter and 2.5-inch woofer into the device, which is powered by Dolby. Only the Echo Plus, with the same sub but larger 0.8-inch tweeter, displays more powerful sound.

In reality, sound quality is similar to that of the original Echo. So at low to middling volumes, audio sounds clear and detailed, and good enough for light use in, say, a kitchen. Whack the volume up to max and you’ll hear distortion, with audio lacking definition.

Certainly, if you’re looking for the ultimate audio experience, this isn’t the product for you. You should probably take note of the Echo Dot, pairing it with a high-quality speaker, or the new Alexa-powered Sonos One.

That’s not to say that you should write off the Echo entirely. I don’t use mine for music (I have Sonos, voice controlled via Alexa, of course), but prefer the clearer and louder responses from this model compared to the rather tinny-sounding Echo Dot. 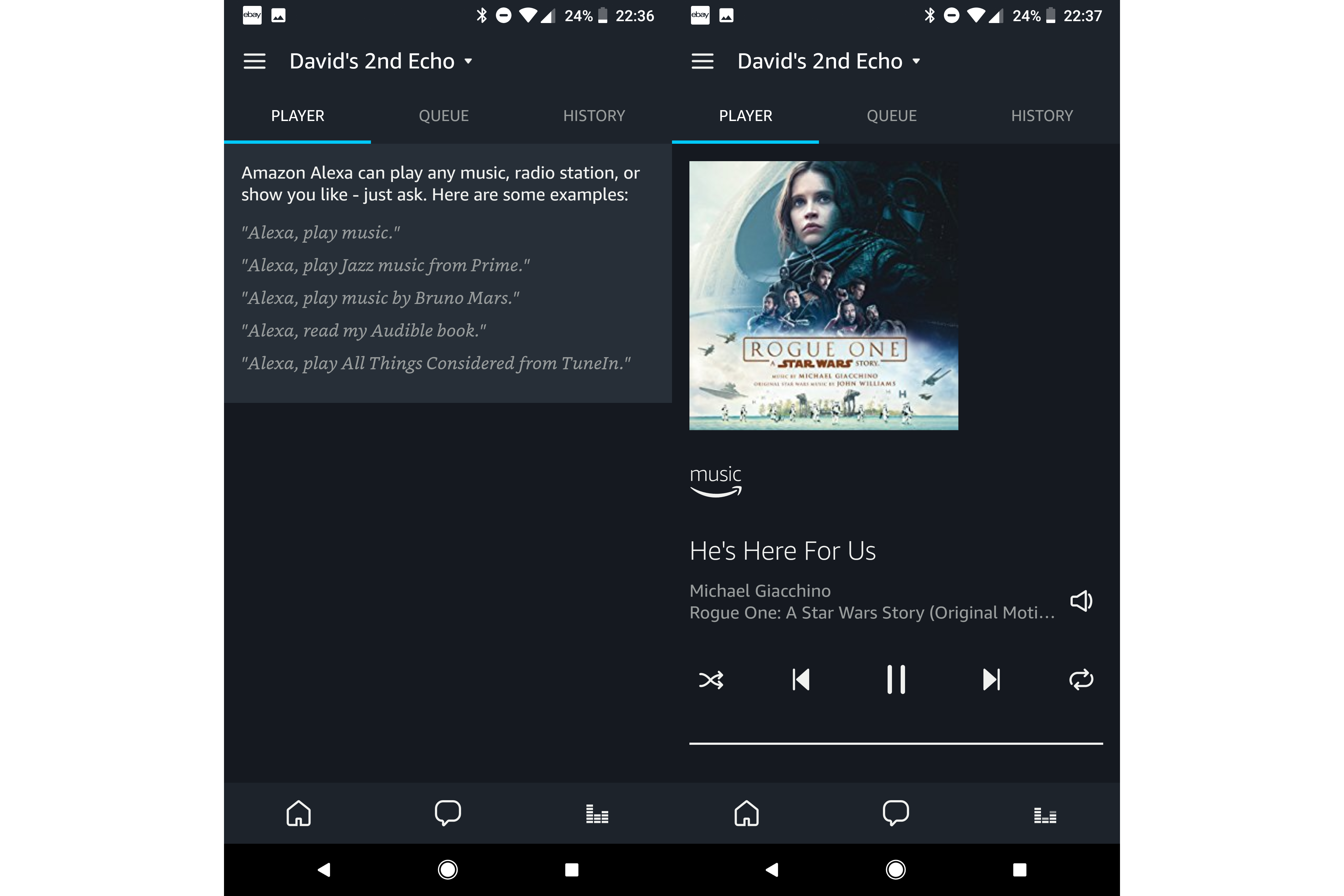 If you want better audio out of the Echo, there are two options. First, if you buy two, you can put them together in a stereo pair (see, how to create an Amazon Echo stereo pair). This gives you proper stereo separation. If you want a bit more low-level oomph, then the Amazon Echo Sub is an excellent addition to the mix. The best combination is two new Echo Plus speakers and the Sub, but the Echo 2nd Gen comes a close second.

There are so many option from Amazon that making the right choice of Echo is rather confusing. If you only want basic voice assistant support or have a separate stereo, the cheaper Amazon Echo Dot (2nd Gen) is for you. Most people will find that the high-end Amazon Echo Plus (2nd Gen) more expensive, the smart hub isn’t that useful at the moment and its sound quality isn’t leaps and bounds ahead of the 2017 Echo. The most complete and useful experience actually comes from the screen-toting Amazon Echo Show (2nd Gen), although that’s double the price.

For those who want the benefits of a smart assistant for home control, plus clear and well-defined audio responses, the 2017 Echo is the product to buy. And, it’s exceptionally well priced.

It doesn’t have the audio prowess to take on the best Bluetooth speakers. However, clear audio, great looks and a significantly lower price than the original make this smart assistant a winner.