What are Apple AirPods?

The Apple AirPods are the first completely wireless earphones (or ‘earbuds’) from Apple, and the perfect companion for handsets such as the iPhone X and iPhone 8, which don’t have a traditional 3.5mm headphone socket.

In lots of ways, they’re the best wireless earbuds you can buy right now, thanks to a rock-solid connection, easy setup and great battery life. It’s a shame that the limited fit won’t suit all ears, and the sound isn’t quite worthy of the £159/$159 price tag.

Then there’s the competition to consider. Since the Apple AirPods were announced, there have been plenty of new challengers on the scene. Some of them are really good, too – we’ve compiled a list of the Best True Wireless Earbuds. Our current favourites are the Sony WF-1000X, which aren’t nearly as good in the pairing department but sound way better. 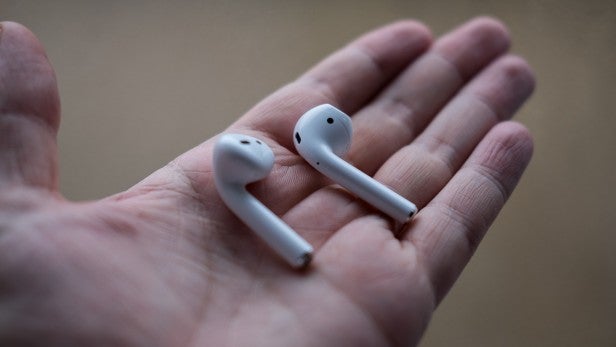 Announced alongside the iPhone 7 and iPhone 7 Plus, the Apple AirPods were meant to silence anyone who bemoaned the lack of a headphone jack on the new Apple phones.

Instead they quickly became an internet meme, compared to electric toothbrush heads that came housed in a dental-floss holder.

Yet, after using these dinky wireless buds constantly for a few weeks, it seems too easy and a little unfair to boil what is essentially a fantastic (yet flawed) product down to a few ‘funny’ online pictures.

Initially, my biggest concern was the odd design. AirPods look like someone has taken a pair of scissors to the cord of EarPods, leaving just the lonely buds.

They look just like Apple’s older earphones – the ones you got with your iPhone, and hopefully replaced with something much better – except the stem is slightly elongated to accommodate improved microphones. Some will think they look odd protruding slightly from your ears like an über-futuristic Bluetooth headset, but it doesn’t bother me, especially as they’re getting more ubiquitous by the day.

They’re surprisingly subtle when you’re looking face-on and can easily be camouflaged by a tangle of facial hair. They do look a bit odd from the side, and I’m sure I’ve seen some lingering looks from passers-by, but I don’t feel quite as self-conscious wearing them as I thought I would. In any case, they’re so ubiquitous now that the look as been normalised.

My bigger concern, though, is fit, because what use are earphones this small and delicate if they just fall out? For me, they fit perfectly and nestle comfortably into my ears. I can vigorously shake my head and they’ll refuse to fall out – same goes for if I accidentally knock them. I’ve run in them, slept on a plane with them on, hauled myself through rush-hour London in them, and they haven’t so much as budged.

But this is far from the case with everyone. I passed the buds around a group of friends and for about 50% of them they fell out after a slight shake of the head, while a few others managed some stronger movement.

It seems like it changes from person to person, and that’s a naive move from Apple. Why aren’t there any tips included to improve fit? Other wireless headphones have often included ‘wingtips’ designed to catch your outer ear, holding the earbuds in place, although these would have undoubtedly disturbed the clean design. Sir Jony Ive probably vetoed them.

My advice would be to try them out before you buy. Oh, and since they’re white, they do get a little dirty after a while.

If you plan on buying the Apple AirPods because you’re looking for a sound experience that’s on par with the price, then don’t bother. But I can’t see anyone doing that.

EarPods were often lambasted for their meagre sound, and while there is some definite improvement here, they’re far from what would describe as ‘great sounding headphones’. For audiophiles these ain’t.

As with lot of these completely wireless earbuds there’s a noticeable lack of crispness in instruments and detail in vocals. But, there’s a lot more bass when compared to the older EarPods and most sub-£100 earbuds. The bass isn’t too harsh either, and it doesn’t overshadow the other parts of a song. I’d say the bass is much more manageable than Beats cans, which often ruin genres of music that aren’t hip-hop. 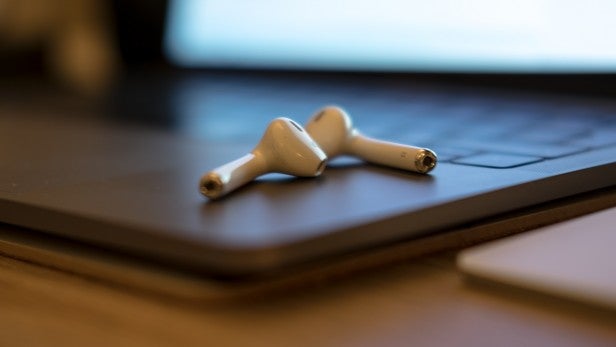 Music with a very engineered sound – chart pop, for example – actually sounds quite impressive and there’s plenty of clarity in electronic beats that you wouldn’t get on EarPods. Pump the volume up to full whack and this will quickly disappear, but that’s hardly a surprise.

Issues do arise when running with the Apple AirPods, as ambient noises overtake the audio thanks to poor sound isolation. If the AirPods aren’t stuck right into your ears, it’s easy for other noises to wash away the sound.

I love my Bose QC35 and I know our Homes Editor Ced swears by the excellent Sony MDR-1000X, but even the best Bluetooth headphones still suffer issues. Audio is prone to cutting out when you put the phone in your pocket, and pairing is a cumbersome affair of pressing buttons and hoping the connection is made.

Most of what makes the AirPods so exciting is the W1 chip tucked inside that solves both of these issues. It’s the same chip that’s inside the Beats Studio 3 Wireless and will feature in many more of Apple’s headphones down the line.

Pairing is a simple task of opening the battery case, popping them next to your iPhone and waiting. A message will appear, tap ‘connect’ and you’re done.

What’s even cooler is that those AirPods are now connected to every other iPad, MacBook and Apple Watch signed in with your iCloud account. I opened up my MacBook and there they were, sitting in the Bluetooth menu.

Range is excellent too, and audio never seems to drop, which isn’t something you can say about Bluetooth which as a technology is prone to momentary drops and digital blips.

There are a bunch of accelerometers inside, too, just like an iPhone. These know when you put the AirPods in and start the music, and they pause when you remove one. You can keep one bud in the case and all audio will be routed through the one in your ear.

Tap on the centre and Siri will pop up too, but due to Siri still being mostly rubbish I can’t say I use this feature much. Apple’s voice-assistant is still too slow and misunderstands me too often to make it worthwhile to stick with, and having it be the only way to skip tracks and alter the volume without reaching for my phone is annoying. I would like some virtual controls on the buds, but we’ll have to wait for version 2 for that.

They are not exclusively for iPhones and iOS either, with Android support being decent if not quite as good. You won’t benefit from the easy setup, or Siri integration, but the connection is still rock-solid and battery life just as good.

While audio quality isn’t one of the Apple AirPods’ best attributes, battery life certainly is. Apple’s claim of five hours worth of juice per charge for the buds is almost bang on, though this does drop a bit if you’re on the phone a lot.

Five hours might not seem that impressive, but you’ve got to take into account the included charging case can fully charge the AirPods about five times. This gives you around 24 hours when all’s said and done, which is quite a lot better than the competition. Motorola’s Verveones+, a similar set of wireless buds, are more expensive and offer just 12 hours of playback when you’re using the charging case. It’s a similar story with the Sol Republic Amp Airs, which lasted about 2.5-3 hours in our tests. 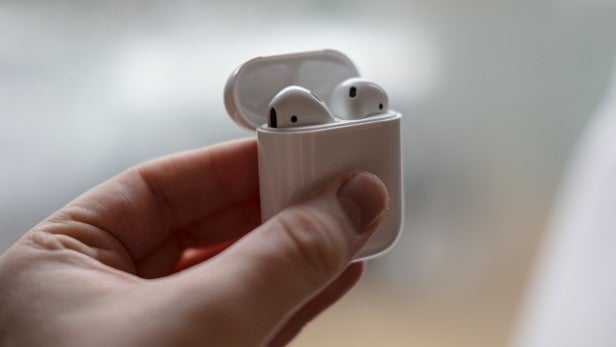 Once the case is dead, plug in a Lightning cable and it’ll juice back up. It’s all very seamless.

A 15 minute charge in the case also gives you a good few hours of listening, so it’s actually quite difficult to be without charge.

Many, including me, instantly dismissed Apple’s first foray into wireless earphones almost immediately after they were announced.

But they are, in fact, one of the best pairs of completely wireless earbuds available. They’re cheaper and better sounding than Motorola’s VerveOne Plus, better looking than Sol Republic’s Amp Airs and have a stronger, more reliable Bluetooth connection than pretty much every other pair of wireless headphones.

Sound quality might not be on par with the price-tag, and some will still bash the design, but I think the complete package wins out. Yet, in the end, I can’t forgive the design for not comfortably fitting in a wide range of ear types – so make sure you try before you buy – nor can I overlook the lack of any controls beyond Siri.

Ultimately, the Apple AirPods make me excited for what Apple can achieve for future versions, as the first attempt falls short in some important areas.