What is the Beats Studio 3?

Noise-cancelling headphones are more popular than ever, and this is the latest take on them from Beats. Well – the box says Beats Studio 3, but these are actually Apple headphones.

There have been a few changes since the company took over, most notable among which is the use of Apple’s W1 chip, also found in the company’s AirPods. Its inclusion gives the Beats Studio 3 some technological advantages over the best noise-cancelling headphones in some areas.

The only issue? Those advantages are limited to iOS, to the exclusion of Android users. This means that the Beats Studio 3 will prove either very good headphones or entirely ordinary, depending on your OS of choice. If you’re an Apple user, you can add a half star to the score.

The Beats Studio 3 may be Apple headphones, but they don’t sport the signature Apple look. They’re not glossy white and there’s no fruity logo. The Beats branding and aesthetics remain – and alongside it, their street-cred too.

Visually, it’s hard to separate the Beats Studio 3 from the Studio 2 and original Studio Wireless models. The construction is still primarily plastic, with a prominent ‘b’ logo stamped on each ear. The overall aesthetic is more streamlined and sits flatter against your head compared to the clunky first-gen Beats made by Monster.

I was sent in the red-with-silver-accents version of the Beats Studio 3 for testing. The Matt Black version is more ‘Batman’ in its look: entirely black and subdued enough not to draw any attention. The headphones are also available in Shadow Grey, Blue, Porcelain Rose and White. 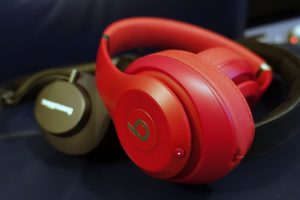 There’s no creaking when you fold the headphones up or twist them; the Studio 3 appear able to withstand reasonable wear and tear. That said, the market has moved on a bit since the first-gen Studio were launched, and similar money could buy you a more luxurious finish. The Sony WH-1000XM2 combines plastic with metal and faux leather; the Bowers & Wilkins PX fuses anodised aluminium with ballistic nylon.

I don’t mind the use of plastic since it helps to keep the weight down, something that’s favoured by the Bose QuietComfort 35 II, too. The only time the Studio 3s feel a little tacky is on pressing the buttons on the left ear – the click is annoyingly loud.

They’re very comfortable, though. The foam ear cushions envelop your ears well, squishing flat against the sides of your head like pillows. Some will like the way these headphones make full contact with the ears. Others will prefer the B&W PX approach, where the ear cup goes around the ear and rests on the head. I found the Beats more comfortable over longer periods, the only downside being a greater build-up of heat. 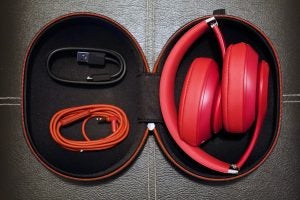 The Beats Studio 3 are straight-up wireless and noise-cancelling headphones that lack any fancy ‘smart’ features, such as the Sony WH-1000XM2’s motion-tracked automatic ambient noise adjustment or the B&W PX’s proximity sensors for auto play/pause. This isn’t necessarily a bad thing, mind: I’d rather headphone makers got the basics right. To me, this comes by way of a Bluetooth connection and active noise cancellation (ANC) for blocking out other people’s racket.

The battery has a Fast Fuel feature, which provides three hours of playback in 10 minutes. That’s great, even if the decision to use micro-USB is somewhat baffling. There’s nothing wrong with micro-USB, but the Studio 3s come from Apple, which has insisted that Lightning is the only physical connection you need on an iPhone 7 or iPhone 8. And let’s not forget that the new MacBook Pro is powered by USB-C. Apple’s ecosystem certainly has its rewards, but cable unity isn’t one of them.

Battery life is varied, and this is where Apple’s W1 chip comes in. You can get around 22 hours of play time with ANC on (40 with it off) – but only with Apple devices. With non-iOS gadgets, the Beats Studio 3 achieved about half that. Meanwhile, the Sony WH-1000XM2 offer 30 hours (ANC on) on a full charge, no matter the device you’re using. 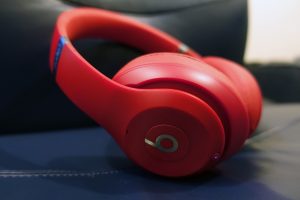 It’s the same deal with the connection. Pairing is almost instantaneous on an iPhone or iPad. Once you’re done, the connection is rock-solid. There’s even a ‘seamless switching’ feature: people on iOS 10 and iOS 11 can use the Beats Studio 3 to take calls on an iPhone, then watch a film on a MacBook, all without the usual dance of pairing/unpairing devices.

On Android, it’s ordinary. The Beats Studio 3 took an average amount of time to connect to my Huawei Mate 9 or LG V30. Occasionally, they didn’t show up in the Bluetooth pairing menu, or didn’t always want to connect when they were visible. I also experienced dropouts in areas of high wireless interference, such as cafes and train stations. I had no such problems with the B&W PX.

Even on an Apple device, there were issues. On my MacBook Air, the Beats Studio 3 kept trying to make me go to iTunes whenever I tried to pause or play something on Spotify.

Basically, the Beats Studio 3 treat Apple-lovers like VIPs. For anyone else, the experience is mediocre at best – and at worst super-frustrating. 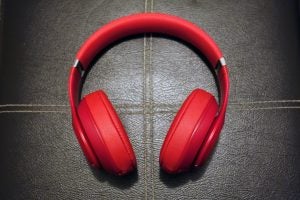 Thankfully, the sound quality and noise-cancelling performance you’re treated to is the same, whether you’re in the iOS or Android camp.

Noise cancellation isn’t the best out there, as the official blurb claims, but it’s very good. While the Studio 3s aren’t up there with the Sony WH-1000XM2 and Bose QuietComfort 35 II, these headphones will happily block out the majority of plane and train sounds. In this department, I actually prefer the Beats to the B&W PX, whose ANC performance is merely adequate.

If silence is important to you, and it should be if you’re considering noise-cancelling headphones, you won’t be disappointed.

Audio performance is also pretty decent. The sound profile is far more mature and accessible than the bass-dominant approach for which Beats used to be known. There’s a strong sense of dynamism and rhythm. It’s an exciting performance, eloquent enough that music isn’t trapped down in the basement. Treble is nicely pronounced – it could do with more bite, but it’s never hard or tiring. 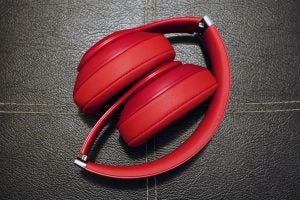 Bass is no longer all-powerful, but it hasn’t been entirely dialled back. Extension is decent, and while I’d still say these headphones favour the low-end, it’s clear that plenty of effort has been made to keep things from sounding muddy. Kick-drums sound powerful and taut.

If anything, it’s the mid-range that could benefit from some improvement. The emphasis on the lower-mid makes the sound a little thick. It isn’t a huge issue, but lower voices – such as Leonard Cohen’s wonderful rasp – come across with less texture than they should.

Overall, most will find the Beats Studio 3 an enjoyable listen, particularly with pop, hip-hop and rock – anything lively, really. That being said, these definitely aren’t audiophile headphones, and those with hi-fi leanings will prefer the musicality and detail of the B&W PX, or the neutral agility of the Sony WH-1000XM2. 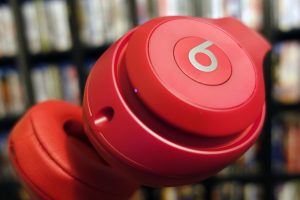 Why buy the Beats Studio 3?

If you’re a fan of Apple devices then the Beats Studio 3 may be for you. For Android users, who won’t benefit from the boost of the Apple W1 chip, the experience is merely average. Similar money can buy you much better alternatives. The Sony WH-1000XM2 or Bowers & Wilkins PX offer a greater number of features and better sound, too.

However, for those who own an iPhone, iPad and iMac, and use these devices to listen to iTunes, these wireless noise-cancelling headphones will serve you well. You’ll benefit from excellent connectivity and battery life. You can’t fault Apple for looking after its own.