The iPhone 8 is a good phone – very good in certain respects – but it also feels like it was the forgotten child. At the new £479/$479 it stands as the cheapest iPhone and might be a good pick for kids or if you simply want the smallest phone possible. For anything else, it might be worth going for the iPhone XR instead.

What is the iPhone 8?

The iPhone 8 is now available without a contract directly from Apple for £479. The phone has undergone many price-cuts since its original release in 2017 and it’s currently at its lowest price. You might be able to pick it up cheaper through other sellers or on contract.

Deal: Get the Apple iPhone 8 Refurbished SIM-free for just £189

While it’s cheaper than the iPhone 11, iPhone 11 Pro and iPhone XR, the iPhone 8 feels like a device from a bygone era. The chunky bezel, TouchID fingerprint sensor and very small display are a far cry from modern full-screen devices we’ve come to expect from both Apple and Android phone makers.

Still, the iPhone 8 is still getting updates – including the latest Dark Mode-infused iOS 13 – and takes good photos. It supports wireless charging and is a great buy if you’re keen on picking up the Apple Watch 5.

The iPhone 8 represents the most refined take on the design Apple first offered up with the iPhone 6, back in 2014. It’s a conventional candy bar touchscreen device with rounded corners and curved edges, although the materials at play here are a little different from that of its progenitor. More in line with most other flagship phones from the last couple of years, the iPhone 8 swaps a metal build for a glass-backed design, while a band of aluminium now runs the phone’s edge, where you’ll find the volume rocker, antennas and lock switch.

Moving to a glass back isn’t solely for aesthetics but it certainly doesn’t hurt them. For one the phone looks and feels more balanced, and although it adds a little weight, it also improves grip, which is no bad thing. The added grams are less welcome on the Plus model but here, it feels just right. 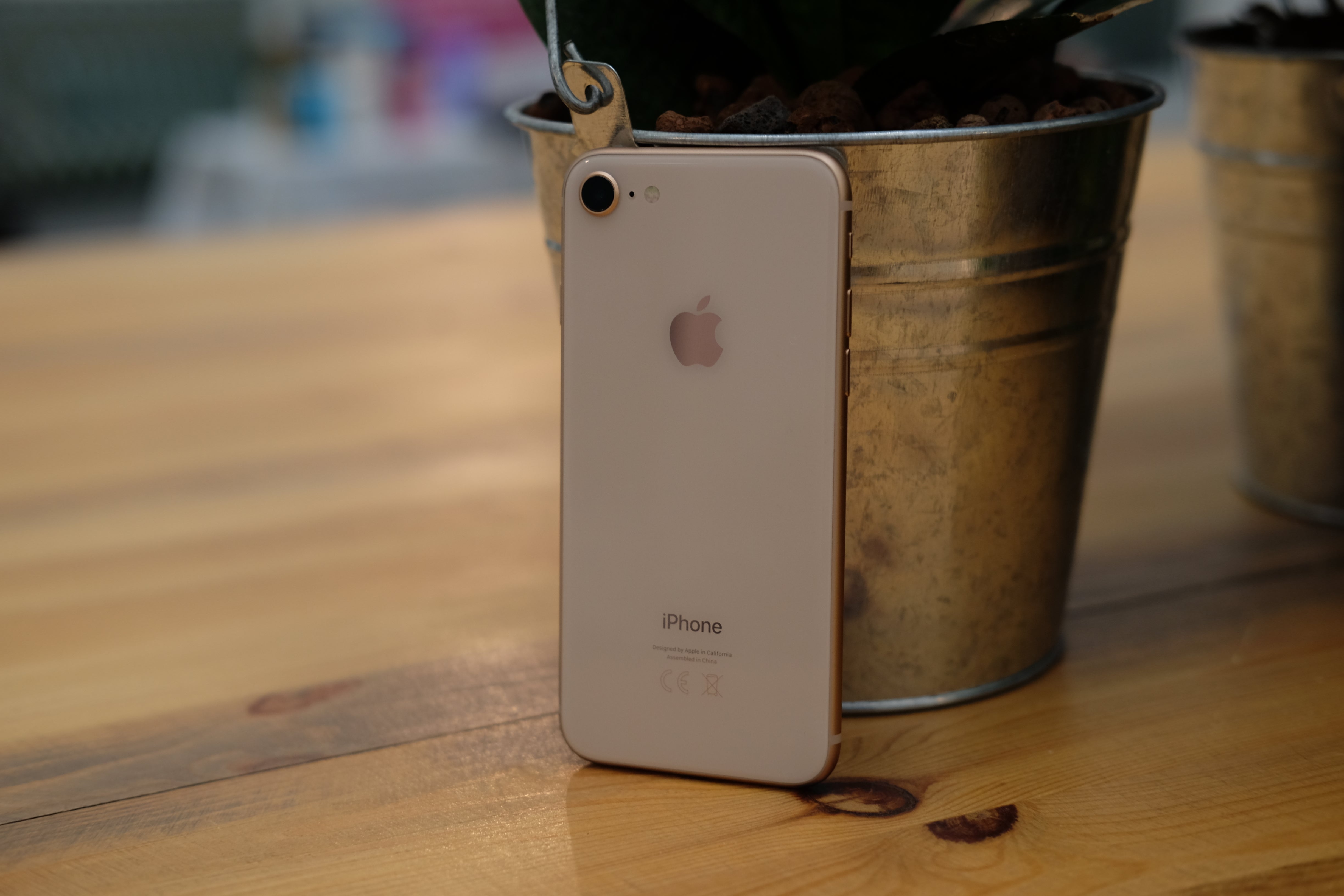 My one slight annoyance with the glass design is that it doesn’t quite blend into the aluminium rim as it did in previous models. There’s a notable lip between the end of the glass and the start of the metal, and my fingernail often gets caught in it. It’s a minor design quirk, however.

The obvious downside with glass is its fragility. The worry here is that a drop that wouldn’t have left any lasting damage on the iPhone 7 will leave the 8 with a seriously cracked rear.

My overall view of the iPhone 8’s design is that it feels dull, predictable and quite some way behind Android flagships. At least Apple has ensured the iPhone 8 is still IP67-rated for water-resistance, a feature that’s fast-becoming a prerequisite on flagship phones. It also retains the exceptional Taptic engine that provides thoroughly satisfying nudges and buzzes throughout the operating system. 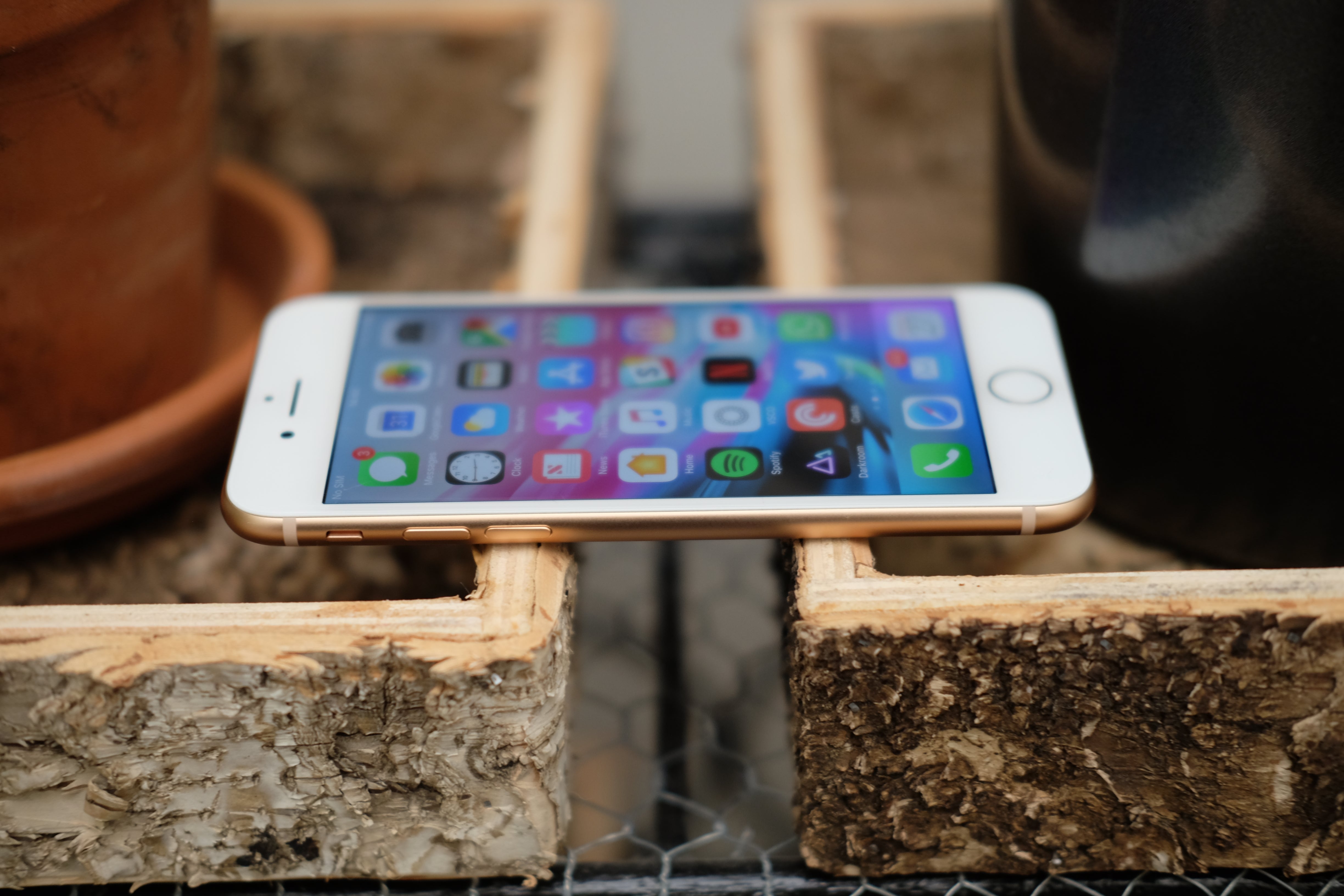 Apple’s handsets remain my preferred choice when it comes to the colourways available. There are three colour options for the iPhone 8 – not the five of the iPhone 11 or XR – but the gold is easily my favourite. This replaces the former gold option and Rose Gold; it’s an amalgamation of both. The glass on the rear of the device possesses a soft, almost ‘creamy’ quality, while the sides are a less vivid pink. It’s appealing, but not all in the Trusted Reviews’ office share this view. If gold isn’t your thing then the iPhone 8 is available in Space Grey and silver too.

It’s been a years since Apple killed the headphone jack, and to absolutely no-one’s surprise, it hasn’t made a return here.

At 4.7-inches, with a barely over-720p resolution, the display on the iPhone 8 doesn’t whip up much excitement. However, there is actually plenty to like here, and the few changes Apple has made do make a noticeable difference in use.

The main upgrade is True Tone, which first debuted on the 9.7-inch iPad Pro. It’s a clever feature that dynamically alters the display’s white balance depending on the environment you’re in. It’s like the Night Shift mode in iOS, but on a hardware level. It sounds minimal, but it really does work to soften the blue tones in the display, with the end result making it more comfortable on the eyes.

Apple is also now supporting the Dolby Vision and HDR10 formats, so you can play back HDR movies from iTunes and supported content from Netflix. Unlike the iPhone X, which Apple claims has a ‘True HDR’ screen, the iPhone 8 doesn’t. Still, watching Mad Max in HDR does look noticeably better than on the iPhone 7. 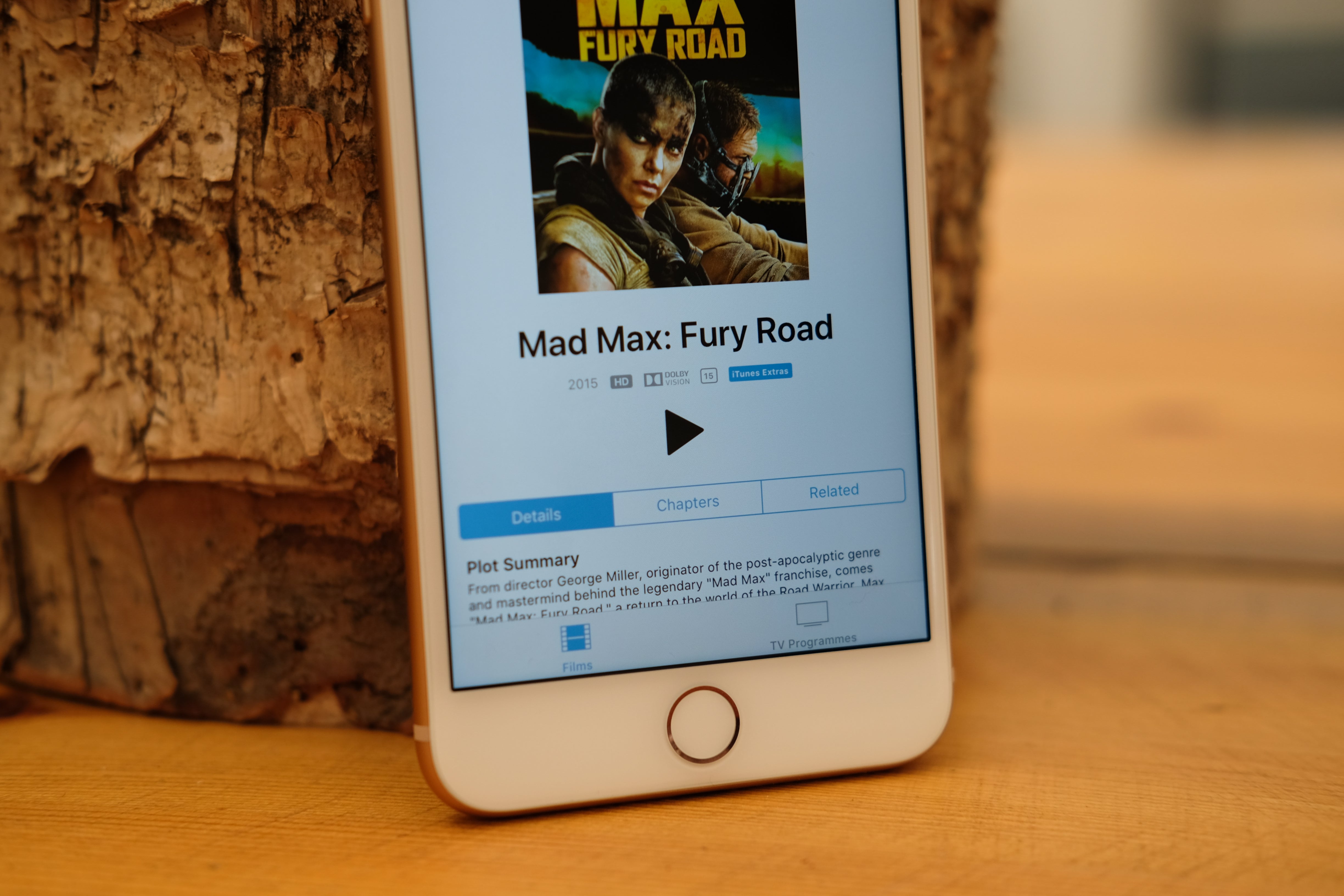 The rest of the display specs remain the same as before. It’s still an IPS LCD panel; if you want the perfect blacks and more vivid colours of OLED, you’ll have to plump for an iPhone X, iPhone XS, XS Max or an Android device.

The resolution can make photos look slightly grainy but it remains one of my favourite displays for colour reproduction, and the support for the DCI-P3 wide colour gamut makes a huge difference in supported content. It also excels for use in super-sunny conditions – an area in which OLEDs often suffer.