What are the Sol Republic Amps Air?

Since Apple infamously removed the headphone jack from its latest iPhone 7 and iPhone 7 Plus, tech fanatics have been racing to find the best set of wireless buds they can. Recently, more and more ‘truly wireless’ buds have been appearing, cutting the cord even further.

Aware of this, pretty much every company under the sun has been racing to target that market. However, most truly wireless buds to date, such as the Motorola VerveOnes+, have received mixed reactions. Add to this the ongoing shortage of Apple’s own AirPods in the UK and many buyers have been left with woefully few decent choices when it comes to wireless in-ear headphones.

The Amps Air follow the same design philosophy as Motorola’s VerveOnes+ and the soon-to-be-released Jabra Elite Sport. The wireless buds come bundled in a separate power case that acts as a protective dock and battery pack.

The pack features a 2,200mAh battery that can charge the buds. As a nifty trick, Sol Republic’s also loaded it with USB and Micro USB ports that can be used to recharge the case or give a smartphone a little extra juice – though be warned the battery is too small to fully charge even a moderately sized handset.

That’s pretty much a necessity, as the buds themselves only have a three-hour quoted battery life – which I found to be slightly optimistic, even. Using the Amps Airs on a long-haul flight, I got an average of 2.5-3 hours’ use out of the buds when listening to music at moderate volumes. The charging case can charge the buds an additional 15 times, which does go some way to alleviate the short longevity. 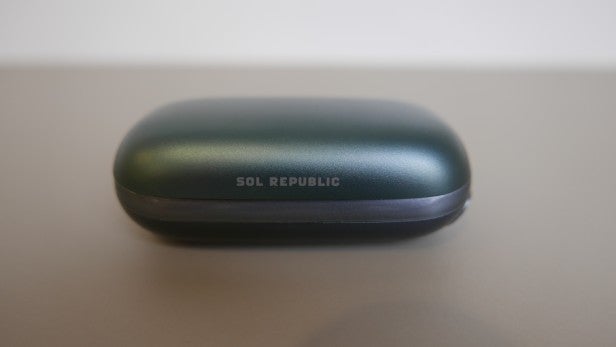 The Airs are solidly built and survived two weeks of bouncing around my satchel during a road trip in the States scratch-free – which is more than I can say for other bits of tech like the Asus Transformer Pro 3.

The buds themselves have equally good build quality. Sol Republic’s done a great job designing the Amps Airs, and has managed to keep the buds size to a minimum. Despite housing more tech than you can shake a stick at, and being sweat- and dust-resistant, the buds don’t awkwardly stick out, or feel ridiculously heavy in the ear.

I was also able to get a decent seal and noise isolation when swapping out to one of the smaller earbud sizes, and was surprised at how snug the fit was. Despite only having four bud options in the box, none of which are of the wing-tipped or clip style, the buds stayed in place even during exercise, which is an impressive feat. 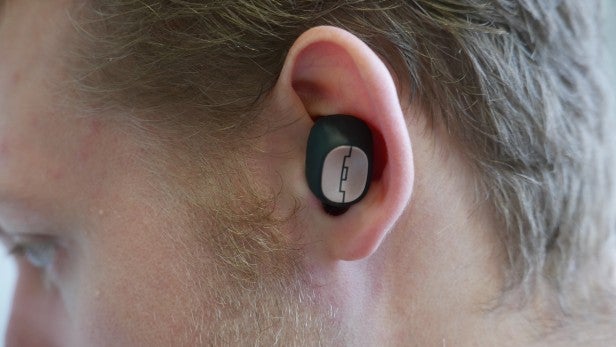 In theory the buds can be used to take and make calls and access smart assistant services, such as Siri and Google Now. The features are controlled using a single button on the buds’ side, which is the only physical control the Amps Air have. This sounds like a great idea, but in the real world I found the built-in microphone to be underpowered for both purposes.

While I was taking calls on a busy London street, the microphone all but tapped out, and the people on the other end of the line struggled to hear me. The same issue occurred when I tried using Google Now. Paired with an HTC 10 the microphone was too weak and the handset regularly failed to understand my commands, which led to more than a few awkward encounters when I tried testing the functionality in public.

I’m also not a fan of the single-button control system. The lack of volume controls isn’t a problem most of the time, but it’s a real annoyance when you’re working out or running and can’t easily reach for your phone. I’d also have liked a way to skip tracks via the buds, although that’s a lesser concern.

Wireless headphones are always compromised when it comes to audio quality, especially on sports sets. This is especially true on pairs where the buds aren’t connected. Even the £229.99 Motorola VerveOnes+ offered at best middling sound quality.

That’s why I was surprised to find the Amps Air offer pretty decent audio quality, by wireless standards. This $180 set won’t match equivalently price wired in-ears, but they are surprisingly capable compared to other wireless sets, such as the Audio Technica ATH-ANC40BT.

The Amps Airs capably handle a variety of different genres. Playing classical music there was a nice separation between the various parts. The string section had suitable clarity and didn’t take on an acidic quality, as happens on many cheaper headsets. The rumbling low-end drums also were audible but never overpowered the other, more subtle instruments, like flutes and oboes.

Mid-heavy punk rock guitars and drums retained their attacking quality without sounding too harsh when listened to at moderate volumes. Pushing the volume up, sibilance did creep in, but this only occurred when the music was uncomfortably loud. All in all, unless you’re a true audiophile, sound quality is more than good enough. 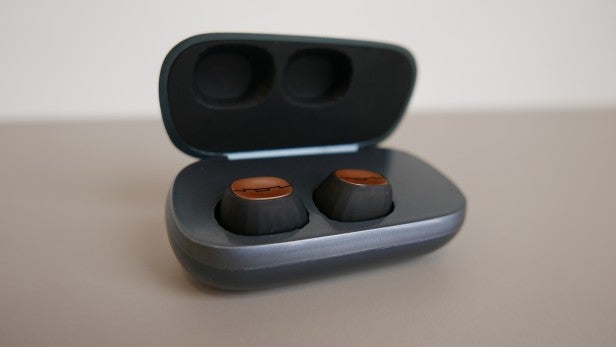 Should I buy the Sol Republic Amps Air?

The Amps Air are the best wireless buds I’ve used. They offer surprisingly good audio quality and a comfortable fit. If you’re hell bent on having completely wireless headphones or an alternative to Apple’s AirPods, these are a great choice.

However, like all truly wireless buds available today, the Amps Air make a few serious compromises. The battery pack is a novel addition, but it doesn’t make up for the Amps Airs’ piddly three-hour battery life, which makes them all but useless on long journeys if you want to continuously listen. The underpowered microphone is also an issue that makes taking and making calls with the Amps Airs a trying experience at best and the lack of media controls is an unfortunate omission.