Wireless over-ear headphones with active noise cancellation. This is hardly a new territory for a company of Sony’s stature, but nonetheless this is a decided move to dominate this end of the market. The Sony MDR-1000X is here to take down the ubiquitous Bose, whose headphones are a common sight on every plane and train. Long story short: it’s mission accomplished.

It’s pretty good timing, too. The iPhone 7 has done away with the traditional 3.5mm headphone jack, and those who don’t want to faff about with adaptors will be needing a good cord-cutting alternative. The demand for good wireless headphones has never been higher.

Sony’s biggest obstacle is the Bose QuietComfort 35, which have all but claimed this turf. But Sony isn’t simply offering silence and freedom of movement: it also has some clever tricks to give you greater control over playback and isolation. These skills make Sony a formidable challenger to the throne. Sorry Bose, the Sony MDR-1000X are the new headphones to beat.

Update: It’s been a year since the Sony MDR-1000X were launched. They’ve proved themselves to be among the very best, and it helps that prices have gone down – it’s not hard to find them at £300 (£30 off) – which only makes them more tempting. Before you buy, however, it’s worth knowing that Sony has released a follow-up with more comprehensive noise-cancelling features and double the battery life. Read my review of the Sony WH-1000XM2.

These are smart-looking headphones, with minimal branding and a streamlined silhouette. They look a little plain from afar, but get closer and you’ll see Sony has made a firm gesture towards luxury. The construction is primarily plastic but it feels tough rather than tacky. There’s polished metal in the headband, and the ear cups and ear pads are wrapped in a very believable synthetic leather that feels lovely.

They don’t just look great: these headphones feel good, too. The polyurethane foam stuffed in the ear pads is very squishy and conforms to the shape of your head. The headband uses just the right amount of pressure to stay put, gripping rather than squeezing. They’re also light enough to sit on your head for hours. I wore them on a flight and managed to fall asleep.

Build quality is strong; there’s no creaking and the headband expands with decisive clicks. Compared to the Bose QC35’s basic plastic construction, the Sony MDR-1000X look and feel far more luxurious. Look after them – there’s a hard case included – and they should last you a while. 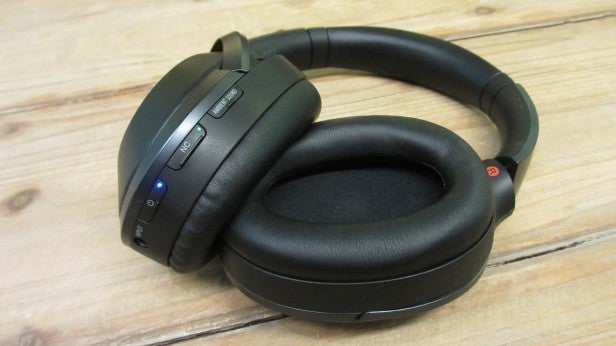 Swiping forwards and backwards to change tracks is easy enough, as is swiping up and down for volume. The double-tap pause/play command takes some practice (you need to hit the right spot) but I got used to it quickly enough.

Tucked away on the edges of the ear cups are a micro USB port for charging and a 3.5mm connection for cabling up when your 20-hour battery runs out. The fact that it’s a 3.5mm jack on the MDR-1000X means finding a replacement is much easier than the Bose QuietComfort range, which use 2.5mm to 3.5mm cables. 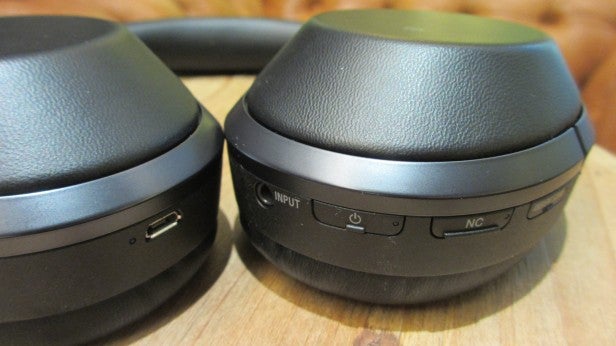 The physical buttons are here, too, with raised edges so you can press them without looking. So far so normal, but here’s what separates the Sony MDR-1000X from its rivals: there are some clever modes accessible from these buttons that give you an unprecedented amount of control over how you listen. A clear voice prompt is piped through the headphones so you know what mode you’ve engaged.

The Personal NC Optimizer analyses the shape of your head and tailors the sound to each listener. The Ambient Sound mode lets you choose to let some sound through, for when you don’t want total isolation. The Quick Listen mode temporarily lets you hear everything without taking off the headphones.

Internally, DSEE HX processing promises to upscale low-quality compressed music files. These headphones are compatible with aptX Bluetooth for higher quality streaming, but you also get Sony’s own LDAC codec. Sony claims it transmits up to three times more data than conventional Bluetooth, but it only works with certain devices, such as its Xperia smartphones and Walkman digital audio players.

Until now, Bose has been the undisputed king of noise cancellation. Well, consider that claim disputed. I’ve used the Sony MDR-1000X for nearly two weeks and I reckon they’re just as good at blocking the outside world.

Like all ANC headphones, the Sony MDR-1000X are better at handling constant noise at low frequencies, but they’re also great at turning everything else down a few notches. I tried them on a plane, and they reduced the roaring engines to a whimper. I got even better results on my daily train commute. 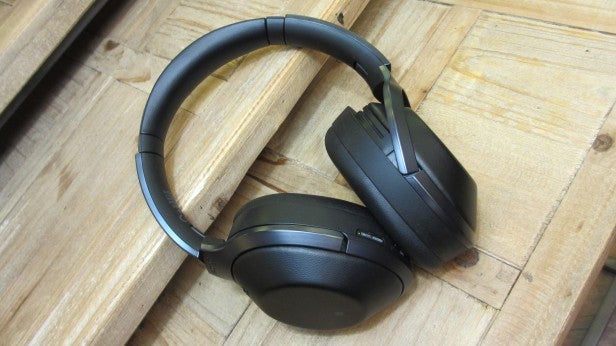 The general hubbub of London streets was no match, either. I’ve walked right next to road works and moving buses and my music was never interrupted. These headphones only struggled with wind noise, which seems to confuse the microphones. To be fair, I’ve not found a single pair of ANC headphones immune to this.

There’s none of the hiss and whine that often afflict wireless and noise-cancelling headphones. Like the Bose QC35, the Sony’s ANC tech is so effective that it feels like the headphones are actively pushing silence into your head. You’ll feel a change in pressure, which feels a little odd at first, but you’ll get used to it and the sensation goes away when you play music.

The effective noise cancellation also makes these headphones ideal for conversation. I made a phone call by a busy road, but the headphones managed to isolate my voice from the racket of buses, leaving the conversation clear.

The Personal NC Optimizer feature I mentioned earlier is a weird and wonderful way of calibrating the sound to the listener. It takes into account the shape of your head, and whether you have big hair or wear glasses. You trigger it from the headphones themselves by holding the NC button and it takes a few seconds. It means you can easily change the profile to take into account wearing a pair of glasses on the fly without having to deal with the faff of a separate app.

The headphones pump out a series of test tones, in the same way that AV receivers do to calibrate surround sound speakers. The tones bounce around on the side of your head before being received by internal microphones. The headphones analyse this data and adjust the sound accordingly. It really works. When I wear glasses, I’m not able to get a good seal around my ears and the sound is affected. The calibration takes this into account and tweaks the tonal balance. 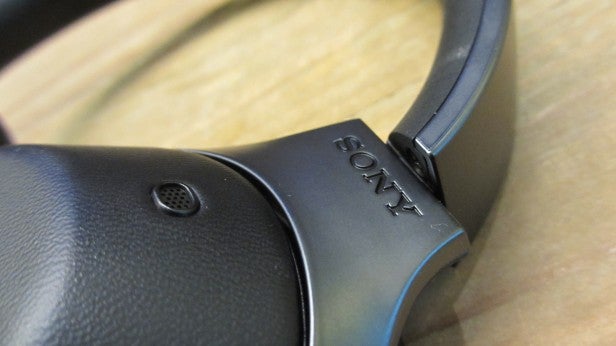 Ambient Sound mode is useful too, for when you’re walking through town and want to keep half an ear out for passing cyclists. In my case, it was an irritable gentleman pushing a heavy trolley, swearing at me for being in his way. You can even choose to block out everything but voices – perfect for crying babies or airport announcements.

Quick Listen mode is my favourite. Hold your hand to the right ear cup and the music will drop away, letting in the outside world until you let go. It’s ideal for when a plane stewardess asks you what you want to drink, or when your colleague comes by your desk. Now you can have a quick word without taking off your headphones. It’s a genuinely useful feature, one that I found myself using a lot more than I had anticipated.

They are an immensely entertaining listen, thanks to a combination of rhythmic precision and hard-hitting dynamism. That agility and impact is something you just don’t get with the Bose QC35, which are a little too polite. Sony, meanwhile, offers the sort of fun and energy that might have you get up and dance about when you think nobody is looking.

The MDR-1000X are articulate, too. Detail separation is impressive, with firm leading edges that leave you in no doubt as to what’s happening to those instruments. What’s more, those instruments are given plenty of space. These headphones sound surprisingly spacious given their closed-back design.

Tonal balance is good. These headphones don’t favour any particular part of the frequency range, which makes them very versatile. The treble is crisp without grating or hardening up. The midrange is direct and expressive, with plenty of emotion in vocals. The bass is plentiful and low without ever losing its definition or manoeuvrability, nor ever threatening to overpower the rest. That’s something that even the more expensive Sennheiser Momentum 2.0 Wireless struggle with, sometimes coming across as overly rich. 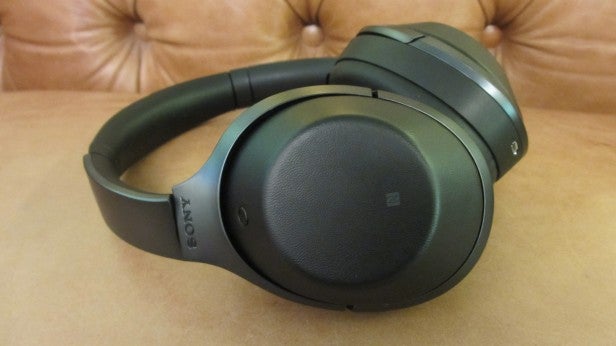 I put these headphones through my usual gauntlet of test tracks (from John Williams to Hans Zimmer, via Daft Punk, AC/DC, Taylor Swift and Buena Vista Social Club) and I’ve come to the conclusion that these are seriously talented performers for the money, with no obvious shortcomings. That Sony has managed to make such well-rounded headphones – despite loading them with extraneous tech – is very impressive.

And that’s just the wireless performance. Plug in the cable and the performance is even better, benefiting from a more full-bodied sound and more subtlety in the textures. You don’t get the controls, though, as the touch-sensitive pad only works with Bluetooth.

You can carry on listening when you run out of power through the 3.5mm headphone cable, albeit without amplification or noise-cancellation. Sound quality dips – clarity and energy take a hit – but the overall character remains. Compared to the Bose QC35 in no-power mode, the Sony MDR-1000X sound fuller and better defined. 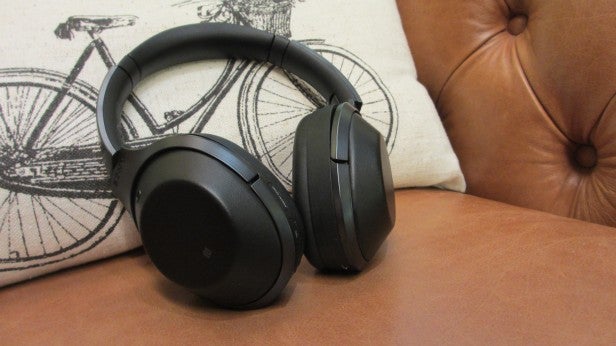 Yes. Absolutely. The Sony MDR-1000X have managed to dethrone the legendary Bose when it comes to noise-cancelling headphones, which is a remarkable feat in itself.

But Sony not only provides noise-cancellation that challenges the best in the field, it has done so with intelligence. The Ambient Sound and Quick Listen modes are genuinely useful features, which give listeners a level of flexibility that headphones are not known for.

Then there’s the sound quality, which is traditionally a secondary concern for noise-cancelling headphones. It’s clear that a lot of work has gone into the audio-only aspect of the Sony MDR-1000X, because they sound superb. Yes, these cost about £40 more than the Bose QuietComfort 35 but it’s worth it.

Put it together and you have a personal bubble of high-quality music. That’s the commuter’s dream.

Hands-down the best noise-cancelling headphones on the market – and they’re wireless, too.