Mocked upon release, AirPods have since become one of Apple’s most recognisable products. With the AirPods 2 (or AirPods 2019), the Cupertino brand isn’t straying too far from a formula that it feels clearly works.

More of a mid-cycle update akin to an iPhone “S” year, the 2019 AirPods have an optional wireless charging case, improved Siri functionality and refreshed internals. Is there enough new here to make them a worthwhile upgrade?

Apple has been in the habit recently of releasing new products that look indistinguishable from their predecessors. The new iPad Mini 5, for example, has the same casing and overall look of the four-year-old iPad Mini. The AirPods 2 follow that theme by looking almost exactly the same as the original AirPods.

That means you’re looking at a stark white case with rounded corners and a magnetic flip-top that clicks into place with a satisfying “clack”. There’s a Lightning port at the bottom for charging and a small, almost flush circular button on the rear for pairing with non-Apple devices and checking battery levels.

Flip open the top and you’ll find the two AirPods, again looking exactly the same as the first model: white buds with an extended stem at the bottom and a silver rim. 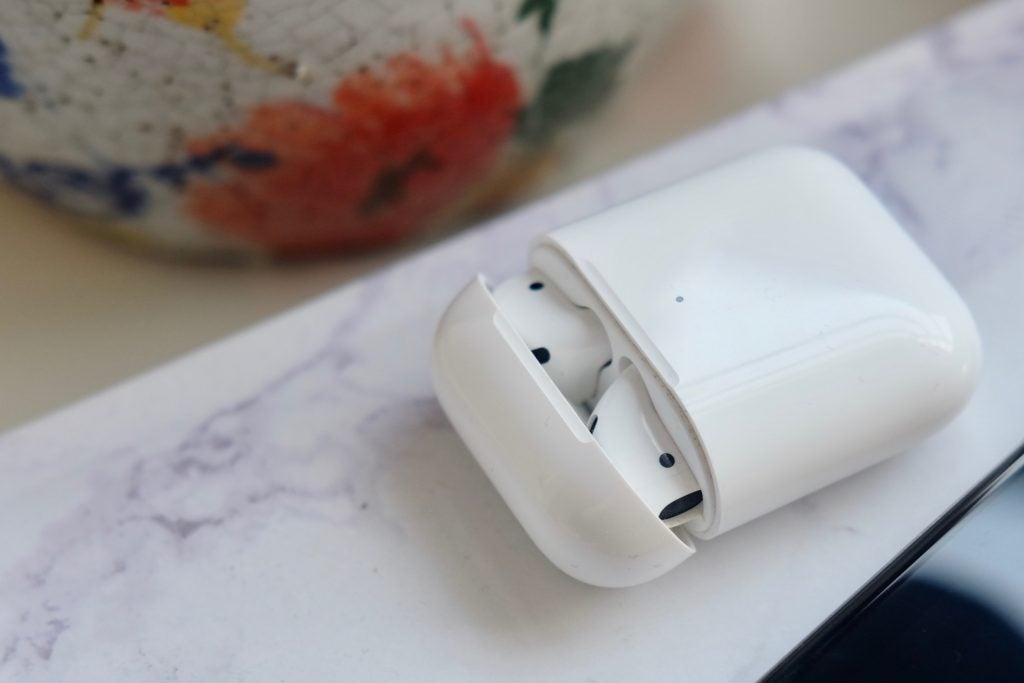 The only real visible difference is that the status light – which switches colours to show battery life – has been moved from inside to the front. This makes sense, since it lets you easily glimpse the charge status when you pop the ‘Pods down on a charging mat.

Even if they were dismissed as ugly when they were first released, the AirPods have become almost an iconic Apple product.

Still, Apple could have tweaked some design elements with this second iteration. I’d have loved a few colours options, for instance. Plus, if you’ve struggled to keep the buds in your ears in the past then you’re still out of luck here: the lack any customisable tips means they have a tendency to fall out whilst on a run. Also lacking is proper water-resistance – an irksome omission for those who get sweaty with the AirPods during gym use.

These all feel like obvious additions that Apple could have added to make the AirPods feel like a must-have upgrade. 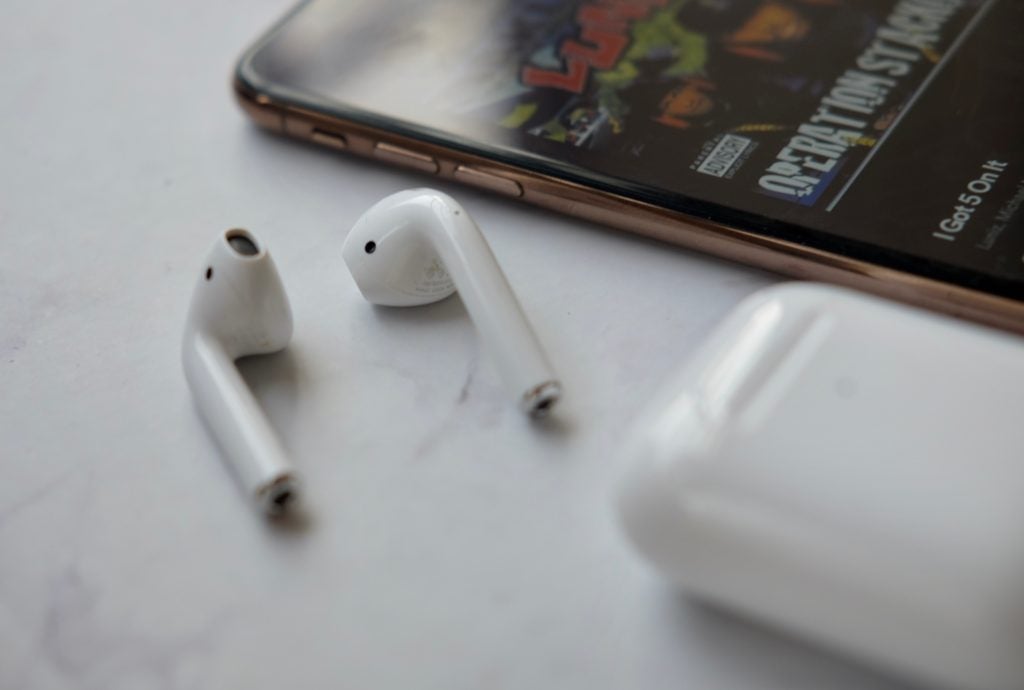 All that being said, the AirPods remain a well-designed set of earphones. The charging case is small enough to slip into just about any pocket or bag, and for many people, myself included, the fit is reliable. I appreciate the way the buds nestle in my ears without burrowing down into my canals, plus they don’t protrude like some competing options.

Inside the AirPods 2 you’ll find Apple’s new H1 chip, replacing the W1 chip from the previous version. Apple claims this updated silicone improves connection speeds, making it much faster when switching the device to which the AirPods connect.

After using these updated buds for a week, there’s no doubt they’re fast in both those areas. Yet, there’s still an annoying, and often glitchy, delay when moving from using the AirPods with my iPhone XS Max to using them on a MacBook Pro.

That H1 chip also allows for one big new feature: “Hey Siri” support. Instead of having to tap one of the buds to chat with Apple’s voice assistant, you just say “Hey Siri” as you would to your phone or Mac. It works well, with Siri support allowing you to skip tracks, alter the volume and check the weather, among other things, using your voice.

Connectivity remains one of the key selling points of the AirPods; it’s still absolutely rock-solid. Your iPhone or iPad will automatically detect the AirPods when you pop open the case for the first time, joining your iCloud account and being available on all your Apple devices when you’re connected. 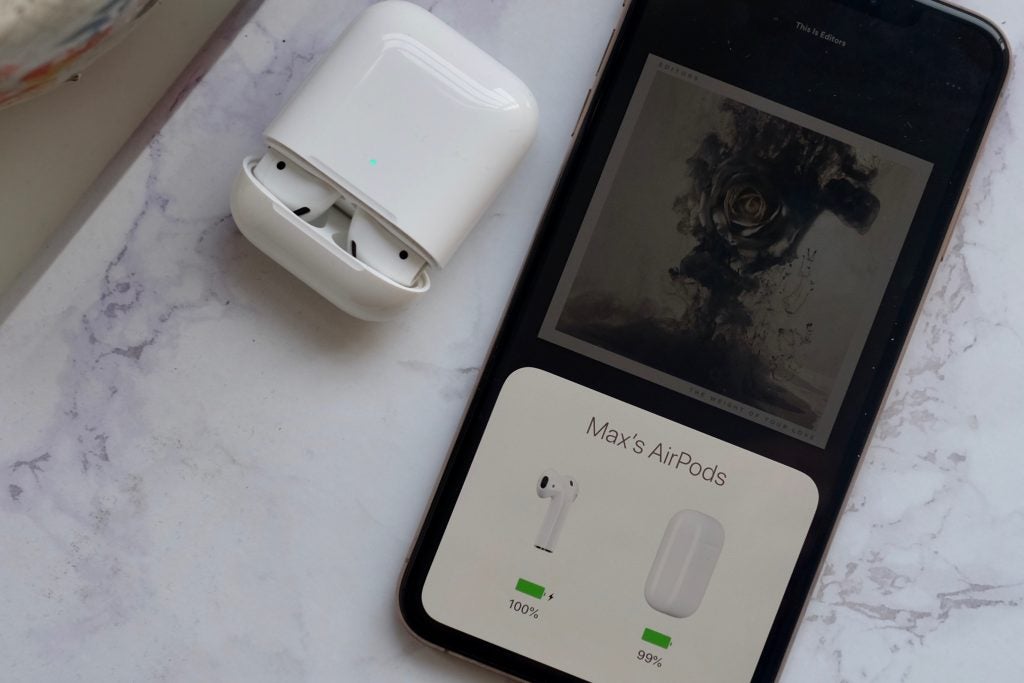 Unlike other wireless buds, both AirPods connect directly to the device rather than one bud acting as a slave to the other. Both keep a constant connection and this ensures neither falls out of sync with the other –  a common issue I found with Samsung Galaxy Buds.

Connectivity might be fantastic, but the actual sound quality is less so. If you’ve been using the original AirPods you’ll feel right at home here. There don’t appear to have been any obvious improvements to the audio quality, and that might disappoint those looking for a more significant upgrade.

The differences I did notice at first were a higher max volume, but after jumping back to a much newer pair of first-gen AirPods than my original pair from release, they sounded just like the 2019 version. It seems that my first pair have had their volume level pushed down to make up for the degradation of the battery.

The real weakness is bass-response: overly bassy tracks feel weak and messy, leaving a feeling that you’re missing out on some of the song. Intense guitar riffs also distort quite heavily; everything turns to mush when you’re listening to songs with lots of guitars and drums. 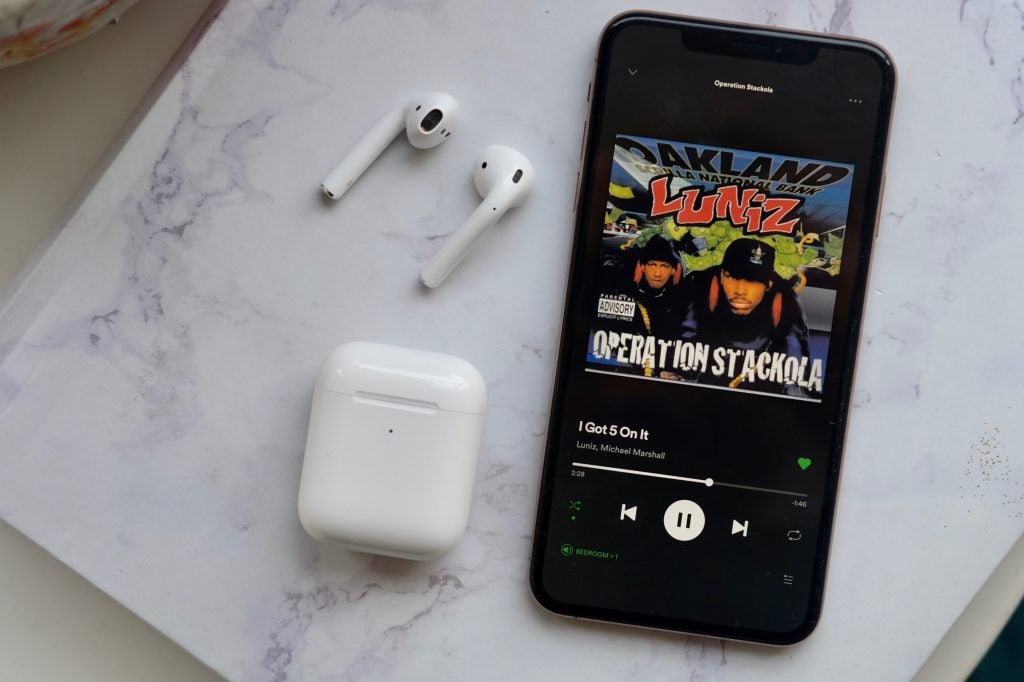 Vocals are reproduced with much more success and there’s plenty of detail, even in the most softly sung parts of a song.

If you’re upgrading from the basic pair of Apple headphones packaged with every iPhone then the audio here is a big upgrade. Everything sounds much fuller, with better separation and a much-improved soundstage.

Where the AirPods really disappoint is when you’re using them in loud surroundings: on a train or plane, for example. The open design means the AirPods don’t block noise coming in and the audio easily becomes lost a a result.

You can also buy the case on its own for £79/$79, allowing you to add your older AirPods into the new case.

I’ve been testing the wireless charging-enabled version and it’s the one I’d recommend. Like the iPhone XS, the AirPods use the common Qi wireless charging standard and that means they’ll charge with any flat Qi-capable pad. I’ve had less luck with vertical pads – Google’s Pixel Stand for example – which seems to have to charging coils too high up to properly align. 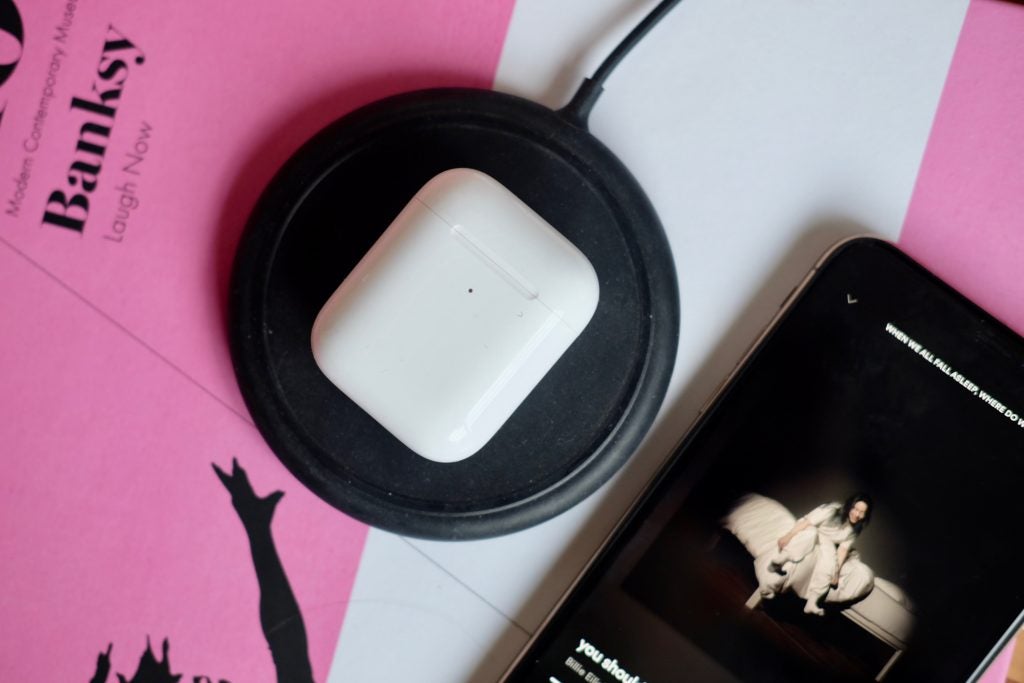 You can even charge them on the back of the Samsung Galaxy S10, thanks to that phone’s Wireless PowerShare feature.

Battery life remains roughly the same as before. I tended to get about four hours of music listening and then four to five charges out of the case before I need to juice it up again. There’s been a slight improvement for voice calls, with Apple claiming three hours of battery life.

The biggest improvement you’ll likely notice if you’ve been an AirPods user since their launch is the benefit of a fresh battery. My first pair are a couple of years old now and the charge levels aren’t what they used to be – which is even more noticeable after using the new version for a week.

If you’re happy with your current pair of AirPods and aren’t fussed with wireless charging, there’s little reason to upgrade here. There isn’t a noticeable sound improvement and many of the issues with the first-gen product still remain.

If you’re coming to AirPods for the first time, and you’re deep inside Apple’s ever-growing ecosystem then there isn’t a better pair of wireless earphones out there – if they fit and stay in your ears, that is. The connection and setup is flawless and the battery life excellent.

Even if you’re an Android user then the AirPods remain a good buy, even if you do miss out on that easy pairing and Siri functionality.

More like a “0.5” upgrade, the second-generation AirPods are simple yet great wireless earphones that are a pleasure to use.