The best headphones if you hate other people

What are the Bose QuietComfort 35 II?

We’re looking at essentially the same product with minor tweaks this time round. Bose has added smart elements, such as Google Assistant, to keep up with stiff competition from the Sony WH-1000XM2 and B&W PX.

While that’s useful, it’s not the main attraction. The Bose QuietComfort 35 II’s biggest selling point is still the one promised in the name: these headphones are the quietest and most comfortable you can buy. 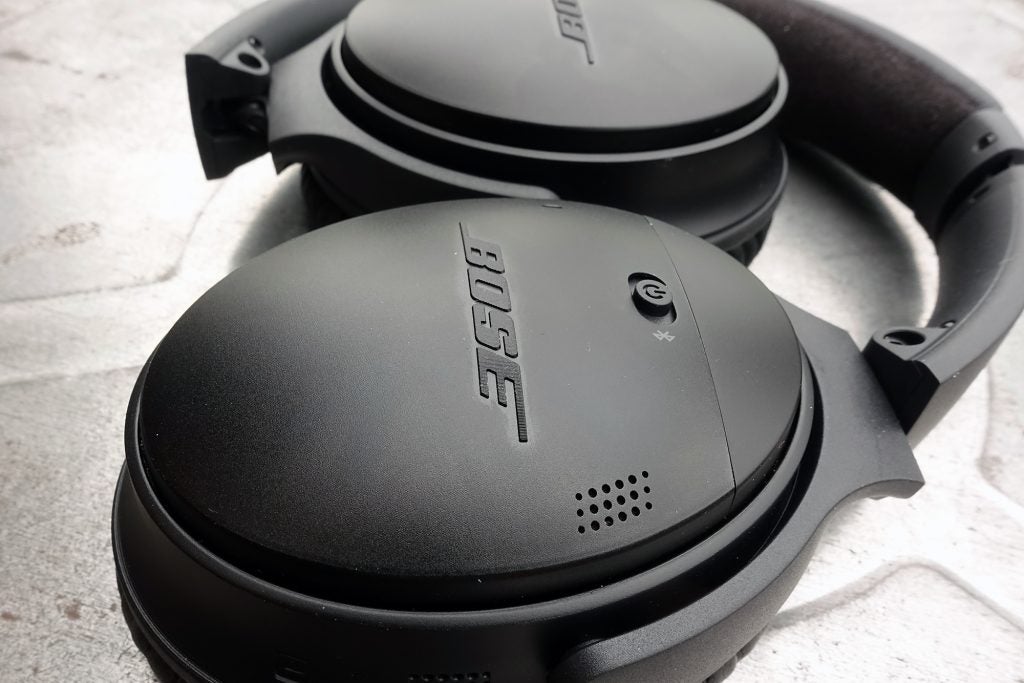 The Bose QC35 II look virtually identical to the original. It’s a design that could be seen as either basic or boring. I think their simplicity makes them versatile – I’ve seen countless commuters wearing Bose QC35s, and the neutral design means it goes with banker and ballerina alike.

The bulk of the chassis is an unassuming matte plastic, available in black or silvery grey. I prefer the black; to my eyes the silver is a little ostentatious.

The only premium flourish is the use of metal caps on the back of the earcups. Unlike the B&W PX, there are no fancy textures or ornate sculpted elements.

That’s not to say these headphones feel cheap. They come with a hard carry case, but if you’re not fussed about scratches, I reckon the QC35 II would happily survive being thrown into a rucksack or handbag on its own. They feel solid; there’s no creaking to worry about. Still, fans of the luxury should perhaps check out the Sennheiser Momentum 2.0 Wireless instead. 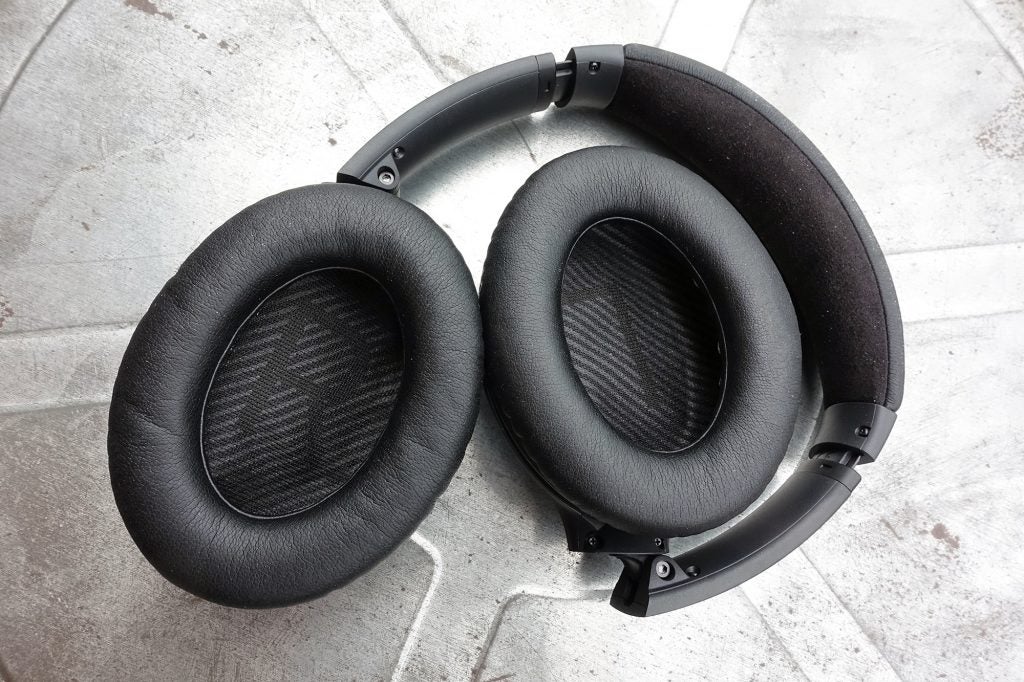 The advantage of a predominantly plastic build is that you end up with very light headphones. The Bose QC35 II weigh 234g, while the aluminium-clad B&W PX weigh 335g. It’s not a lot, but over the course of a long-haul flight, it does make a difference.

Of the best wireless and noise-cancelling headphones I’ve tested, Bose is still the winner when it comes to comfort. The clamp force is sensible – grippy, not squeezy – and the padding is wonderfully soft.

Buttons: there’s an on/off/pairing switch, plus a trip of playback and volume keys on the right ear cup. New for 2017 is the smart button on the left earcup. More on that later. 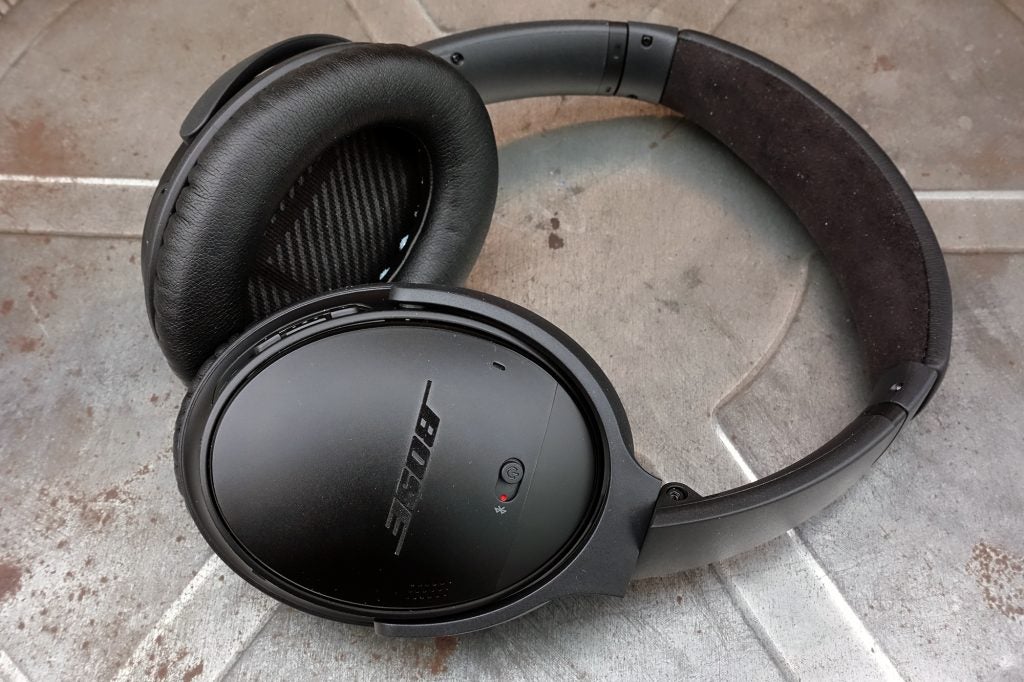 On the wireless front, little has changed. What you get is vanilla Bluetooth 4.1. There is no higher-quality codec like aptX. The B&W PX, which puts more emphasis on audio performance, offers aptx HD.

The active noise cancellation (ANC) is now adjustable. On the original Bose QC35, the ANC element used to be on or off. Now you can configure it in the iOS/Android app, and have it on full, low, or off. It’s a small, but handy feature when you want to keep an ear open for airport announcements, or a child in the next room.

Battery life remains unchanged: you get up to 20 hours of wireless playback, or up to 40 when wired. 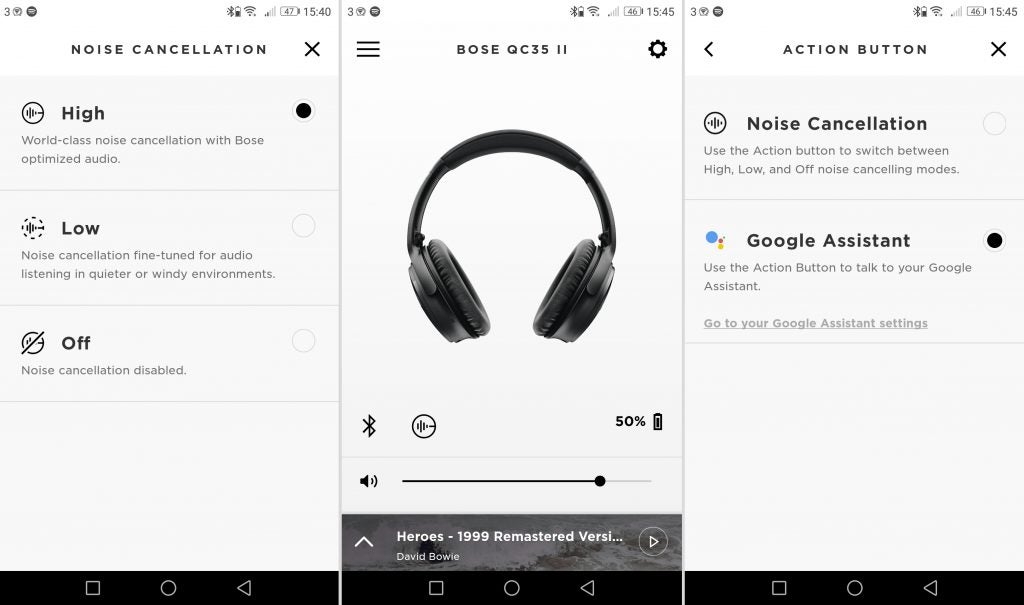 Google Assistant is another new addition. This is the first example of a series of collaborations between Google and hardware manufacturers. It is activated with the smart button on the left ear cup.

Why? After all, the play button on most headphones already double up as a way to call up a smartphone’s assistant. Here, the assistant is a lot better integrated.

Tap that button and it will tell you the time and whether you have any notifications. If you have a new message, one tap will get that read out to you. Want to reply? Just hold down that button, speak your message, and let go.

Holding down that button is how you get to speak to Google Assistant in general. Tell it to navigate home, or play music from your Spotify account, or ask for the weather. I found the voice recognition a little hit and miss in loud areas. Still, when it works, it’s a useful way of getting things done without whipping out the smartphone.

If you’re not interested in the Google Assistant, you can banish it from the smart button entirely. The app lets you switch the feature out and turn that button into a switch to adjust ANC levels. 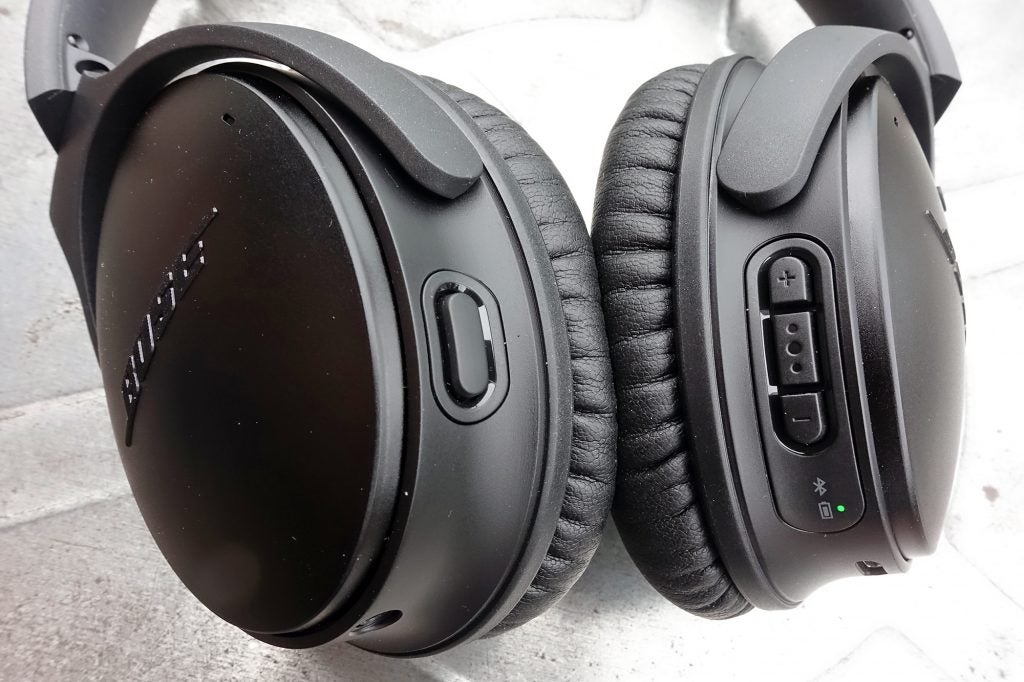 The active noise cancellation (ANC) is still class-leading stuff. If your sole interest is shutting yourself off from the rest of the world, stop reading now and buy these. You won’t find anything else as effective at turning a loud engine into a whisper. It’s seriously impressive stuff.

The usual caveats apply: ANC works best with low, constant noises, so you might still hear the siren of an ambulance zooming past. And strong wind confuses the noise cancellation microphones, so you’ll hear that too. But that’s the case with every pair of ANC headphones I’ve tried.

The impressive noise cancellation has been extended to the microphones used for calls. Previously, many people reported issues with the mic sensitivity of the QC35, where background noise was picked up and made conversation difficult. I had a telephone conversation with the bathroom extractor fan on and the kettle boiling while doing the dishes – the person on the other end was clear and could hear me perfectly too. 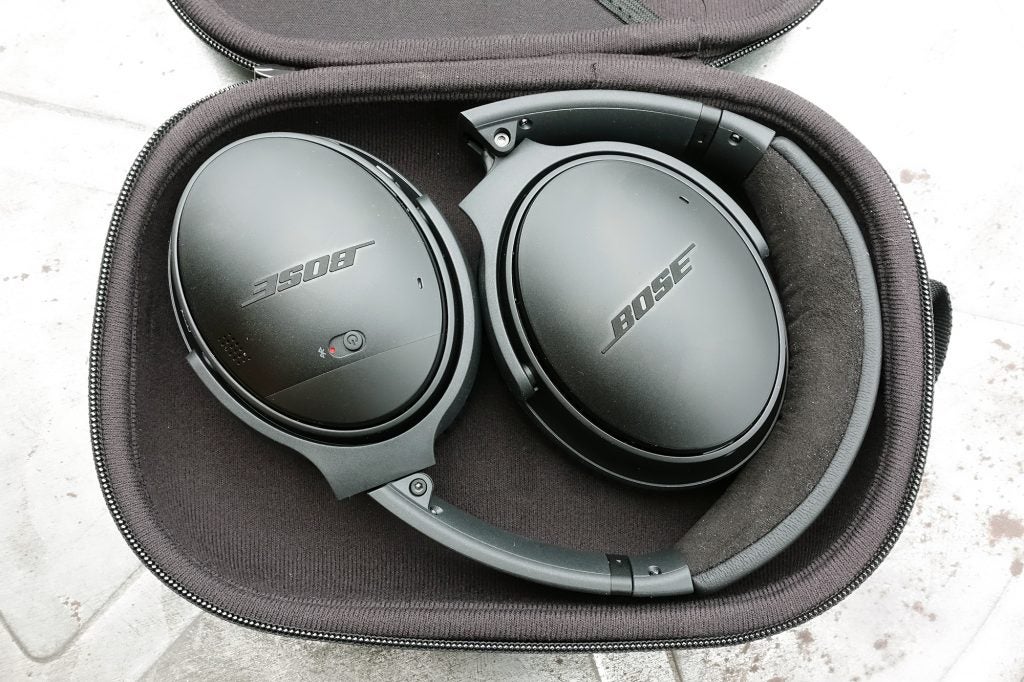 As for music performance? The Bose QC35 II sound good but they’re not the best. It’s a clear sound, free off the annoying buzz or hiss that accompany lesser wireless ANC headphones. Even though these are closed-back headphones, the soundstage is wide and spacious.

The bass is meaty but never overwhelming, the midrange is detailed and the treble is crisp without getting all scratchy. It’s a smooth presentation that’s easy to listen to for hours without fatigue.

The flipside to that easy-listening vibe is that these headphones are a little polite. They’re not a hugely exciting listen. It’s here the Sony WH-1000XM2 and Sony MDR-1000X have the advantage. They sound a lot more dynamic and agile than the Bose, and end up doing a better job of entertaining. The B&W PX, meanwhile, offer a lot more detail and subtlety. 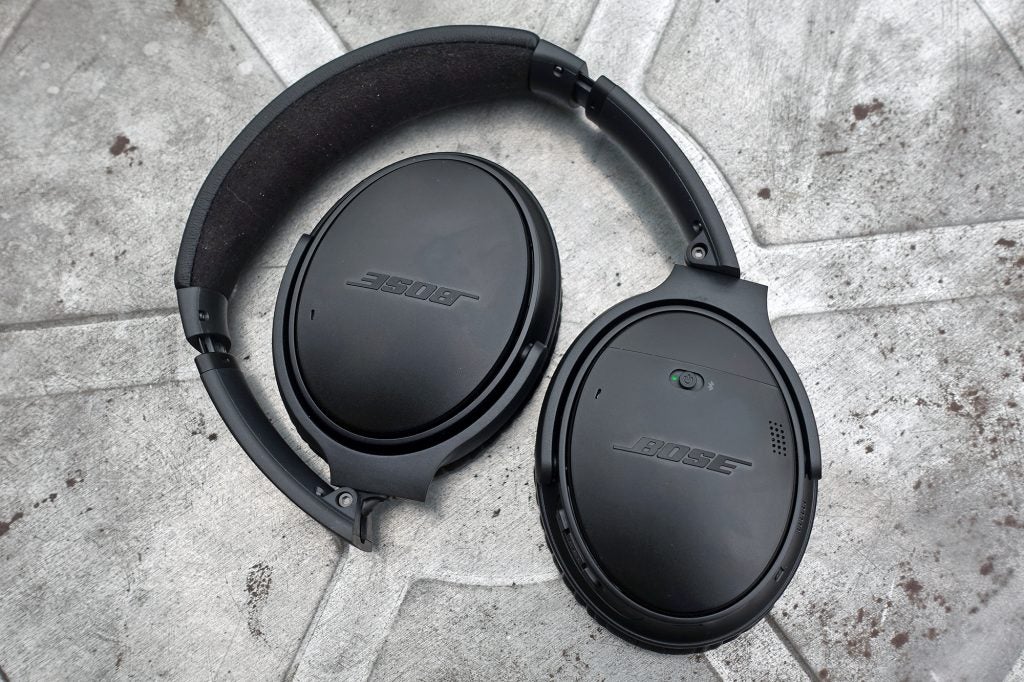 Why buy the Bose QuietComfort 35 II?

If you want the best noise cancelling headphones around, this is it. The Bose QuietComfort 35 II are simply the best at shutting out the world and isolating you in a bubble.

They’re also the most comfortable of the wireless ANC options out there. If you commute a lot, and especially if you fly long-haul frequently, these will be your best friend. The Google Assistant element is cool, but it’s really not that indispensable, and rivals have more impressive smart features.

The Sony WH-1000XM2 have handy gesture controls, plus the ability to automatically adjust ANC levels depending on your environment. The B&W PX have motion sensors and can automatically power up, connect, and play the moment they touch your ears. And both of these offer superior audio performance.

The best headphones if you hate other people