Wireless earbud-type headphones are cool, but they don’t generally sound amazing. That’s because sound is often not the priority. The Apple AirPods, for instance, put a lot of emphasis on connection stability. The Jabra Elite Sport are designed for sports. But now we have the Sony WF-1000X, which happily take a sound-first approach.

They’ve taken a few elements from last year’s excellent (over-ear, wireless, noise-cancelling) Sony MDR-1000X and crammed them into a tiny nugget small enough to sit in your ear. Not only are they head and shoulders above any wireless earbud headphones I’ve heard to date – they’re good enough to replace a lot of wired rivals – but they are also the first of their kind to feature noise cancellation.

Basically, you get excellent sound, total freedom of movement, and the ability to shut out other people’s racket. I’ve not been this impressed by a pair of headphones in ages. 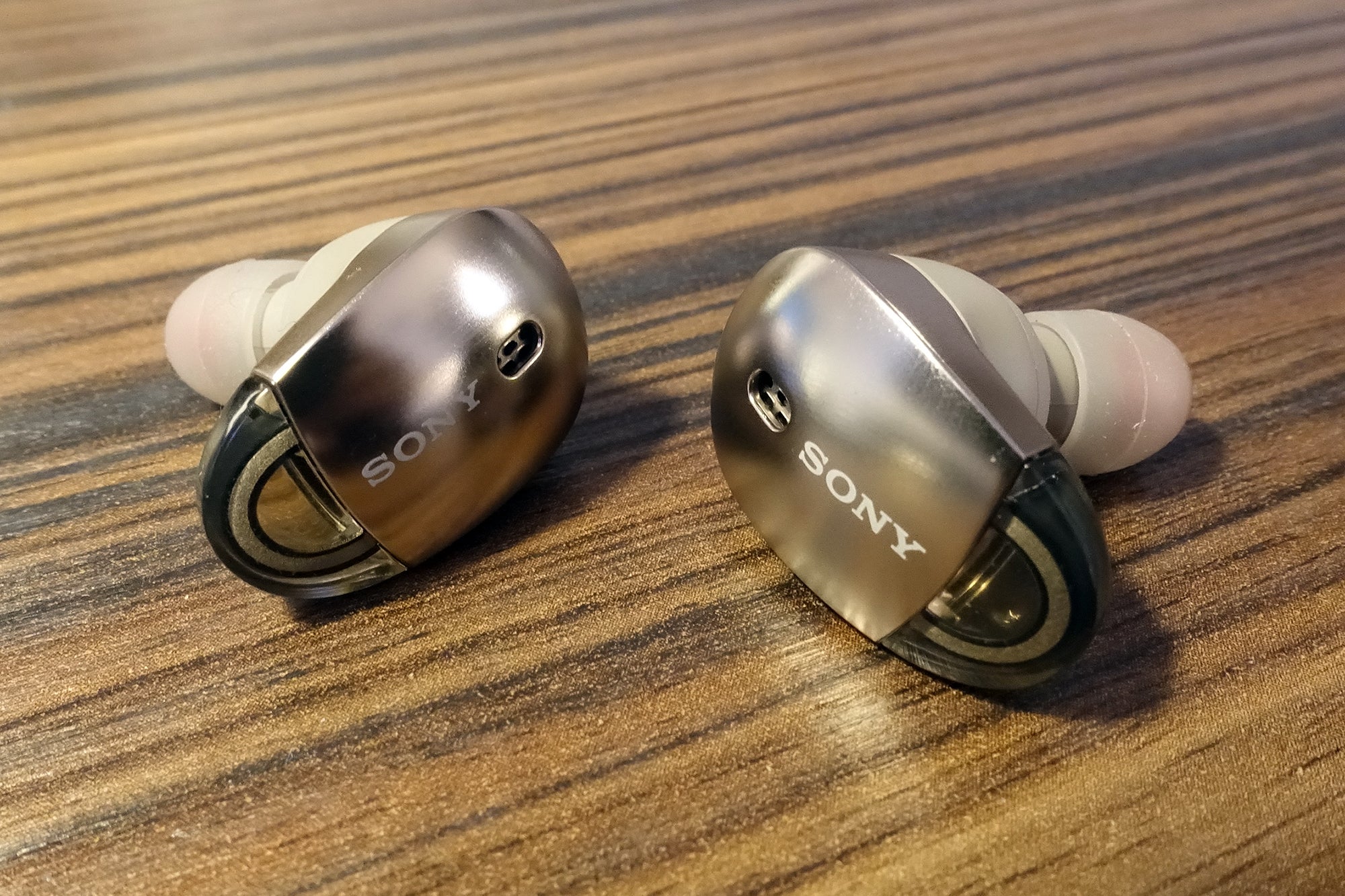 As is now the norm with wireless earbud headphones, the design has two elements: the buds themselves and their charging case. I’ll start with the earbuds.

It’s a subtle design that mostly sits in your ear. It sticks out a little, but not so much that it looks like you drive taxis. While the Sony WF-1000X won’t pass as those invisible earpieces you see in spy movies, the overall effect is a lot less eye-catching than the Apple AirPods’ ‘toothbrush’ design.

You’ll notice a transparent bit at the tip with an arc inside. That’s an antenna to make sure the two buds play nice with each other – the left ear handles information and relays it to the right.

The Sony WF-1000X fit very nicely. There are two types of ear tips in a range of sizes: the typical silicone ones and a rubbery-sponge style. It didn’t take much experimenting before I found one that suits me. Each bud weighs less than 7g and never feels like a burden.

The part of the bud going into your ear canal is ever so slightly angled, which helps the buds go in and stay in. Another thing that helps to secure fit is a small fin (available in two sizes) but that’s so subtle I’m not sure it actually does anything. Maybe that’s the point.

Either way, I tried very hard to to shake the buds loose but no amount of headbanging could dislodge them. The ‘F’ in WF-1000X stands for ‘freedom’, and that seems very appropriate. Sony says these buds could withstand a splash, but are not designed for sports – with everyday use in mind, this level of fit is plenty. Don’t worry about running for the bus.

Each bud has one button. The left ear takes care of power, pairing and noise cancellation. The right ear controls music playback, call start/stop and your phone’s smart assistant (Siri/Google Assistant). There is no onboard volume control, however – you do that from your phone. 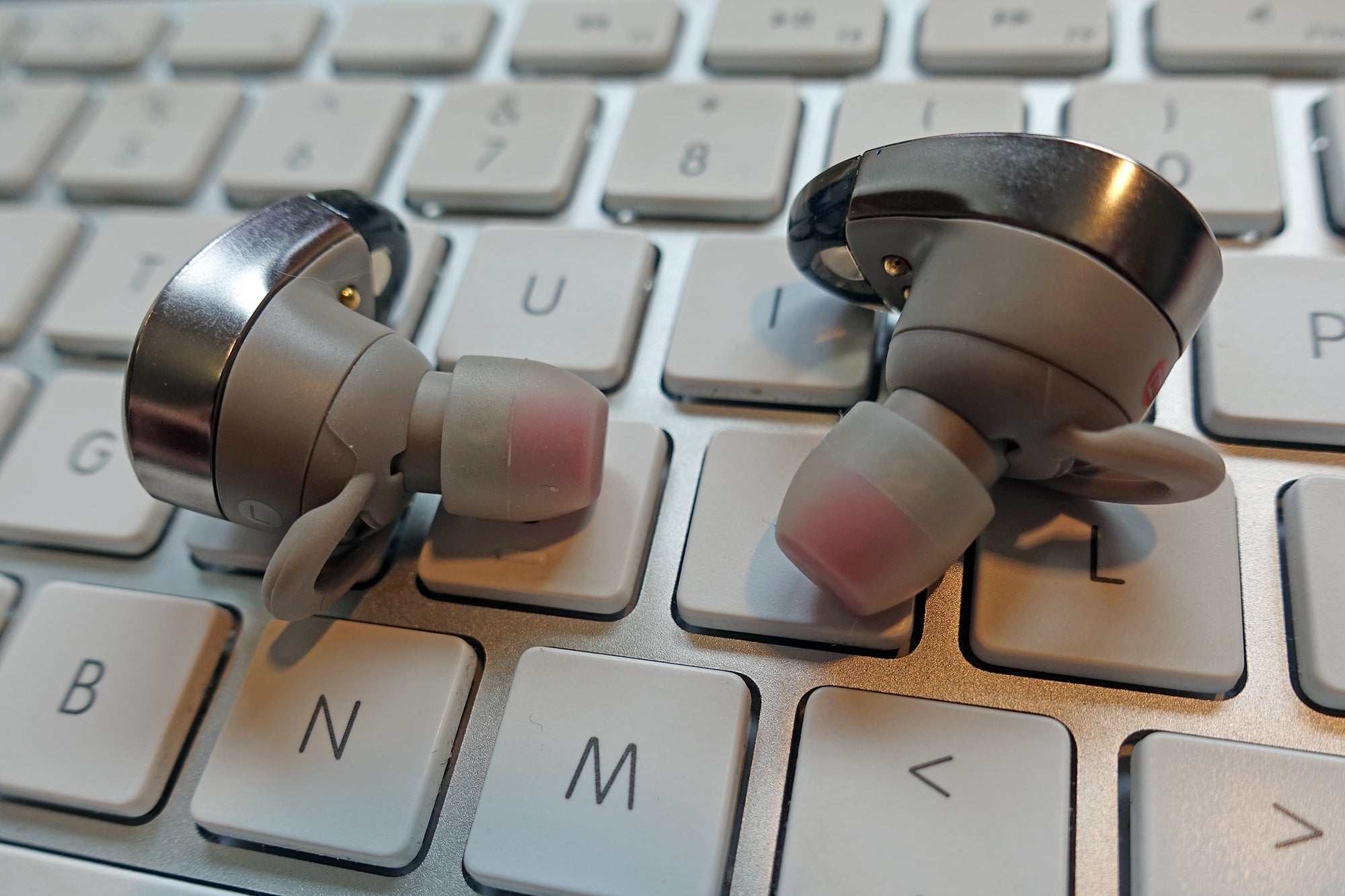 As for the case, it’s a flat box with straight edges and rounded ends. It’s a little chunkier than I’d like, but it is metal and feels sturdy. I tend to put it in my bag and not my pocket, but come winter I’m sure it’ll be fine in my coat.

The bottom of the case has an NFC chip for quick Bluetooth pairing with Android devices. While not necessary, it’s a nice touch. The auto on/off feature, however, is indispensable.

Remove the buds from the case, and they’ll come to life, automatically pairing with the last device you used them with. Replace them and the buds shut down, with red lights indicating the case is topping up their battery levels.

Each bud holds three hours of charge, and the case holds six – giving you a total of nine hours’ listening. The case itself is charged by USB-C. 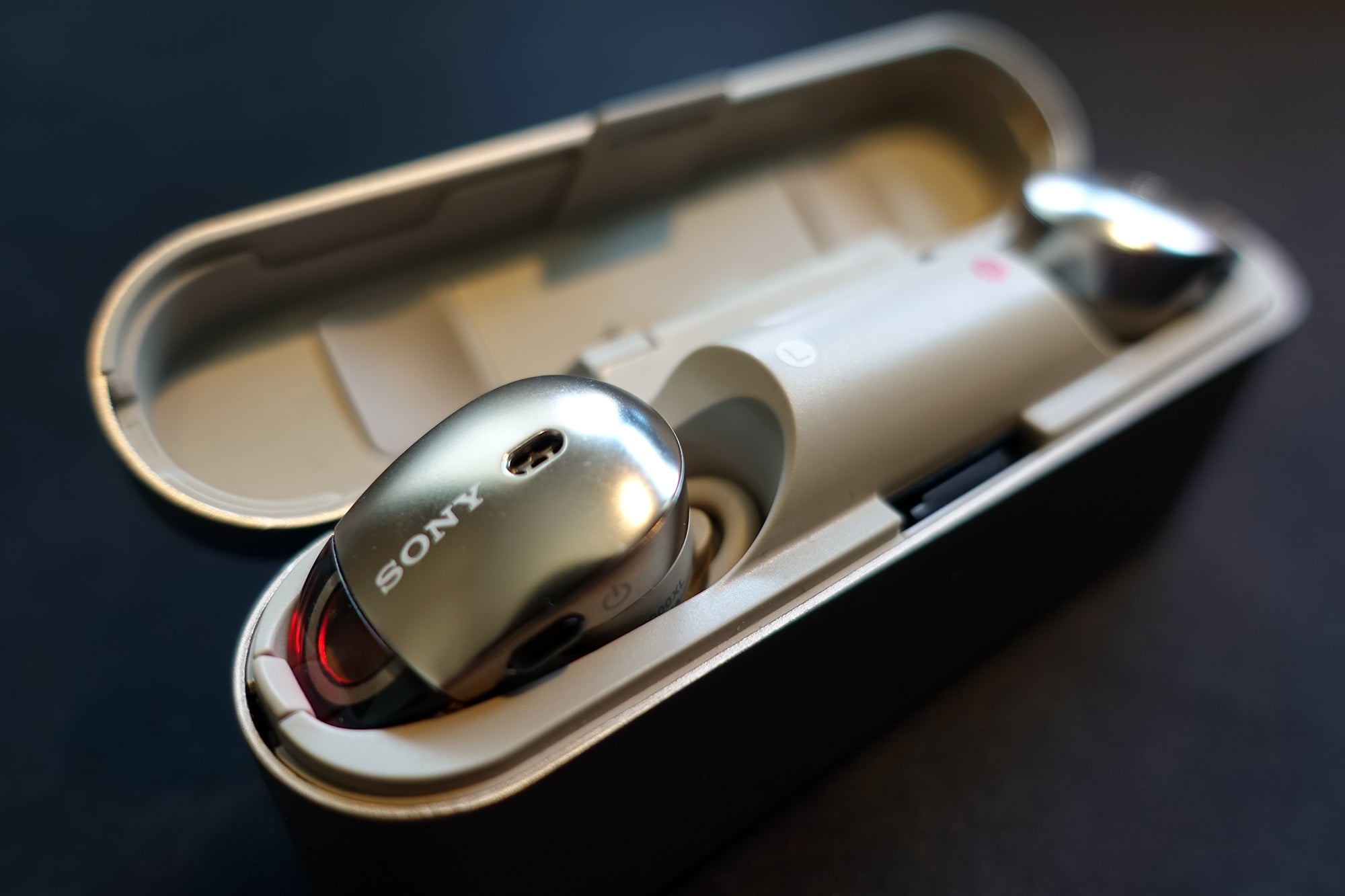 Wireless, noise-cancelling, earbud headphones. You might think the features list is implicit, but there’s a lot more here than meets the eye.

Take the wireless bit. The partner ‘Headphone Connect’ app lets you choose to prioritise sound quality or connection stability. That’s super useful in network-congested areas like busy offices or train stations, where all manner of wireless frequencies conspire to mess with your connection. If you ever experience a drop in connection, this fixes it most of the time.

I should stress, connection does depend on your device – I used a Huawei Mate 9 and an iPhone 6S and managed to wander off (10m or so) to make coffee without so much as a stutter. My Astell & Kern AK70 didn’t do so well beyond 3m.

As for the noise-cancelling bit, the app also lets you decide whether you want to shut everything out, or let in a little ambient noise, or let in just voices. Whether you prefer musical immersion or situational awareness, it’s up to you.

Can’t decide? That’s fine too. The buds’ Adaptive Sound Control feature uses gyroscopes in your phone to work out what you’re doing, and adjusts the intensity of noise cancellation accordingly. It flicks between Staying, Walking, Running and Transport.

If you don’t use the app, you’ll have limited control of the noise cancellation: some NC, all NC, or no NC. You’ll also miss out on the EQ adjustment feature, due via an update in October 2017. 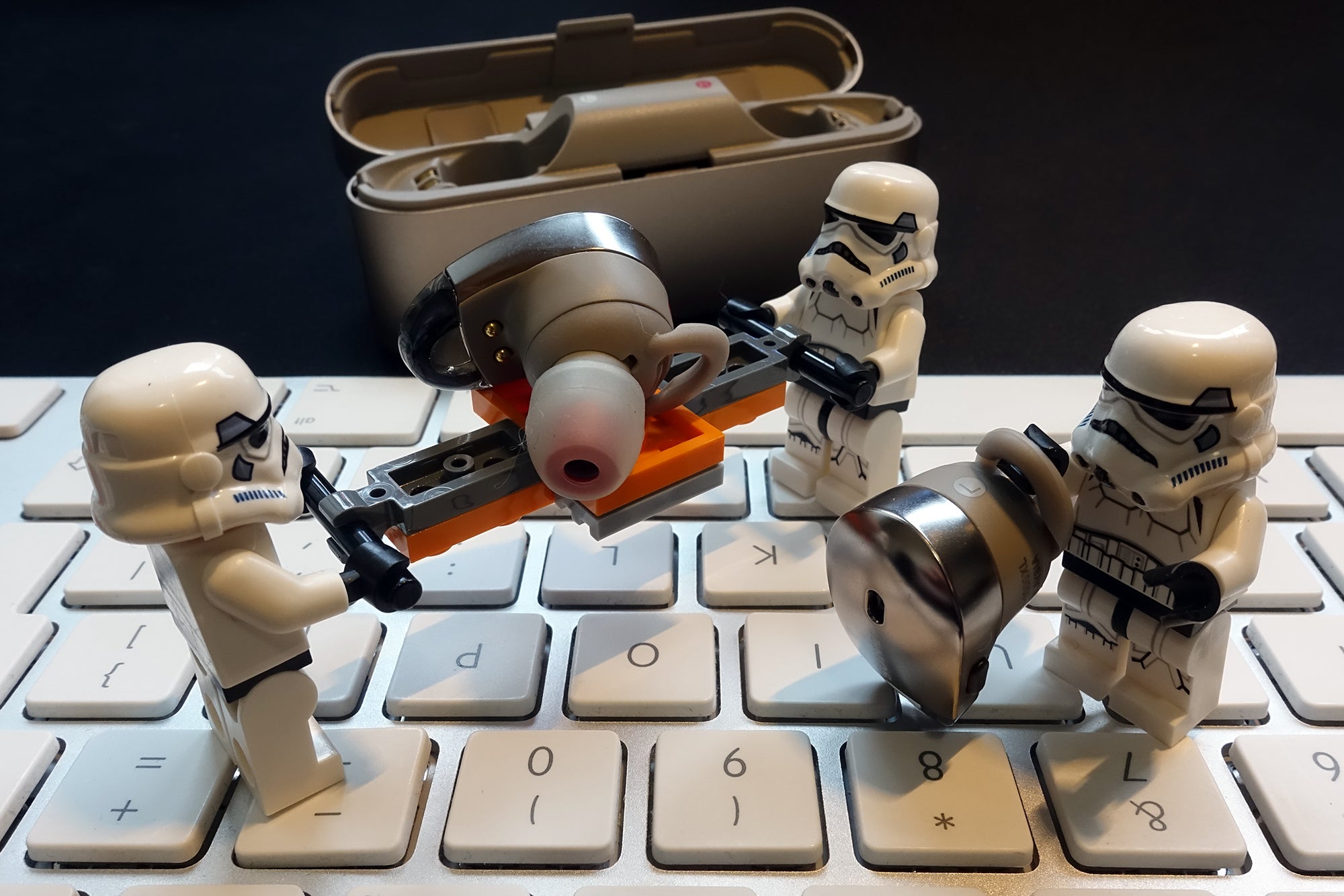 I had reservations about this Adaptive Sound Control thing, but it totally works. It takes about 30 seconds to calculate what you’re doing.

As I sat at my desk writing this review, the headphones had me on ‘Staying’ mode, which meant noise cancellation was on but letting in voices. When I left home to go to the station, a little chime notified me I was in ‘Walking’ mode – NC on but passing through some ambient sounds so I could hear the closest vehicles and avoid getting run over.

Then I got onto a train and groaned as I realised I was stuck in the same carriage as a school trip. But then – ping! – the headphones switched into Transport mode. NC to 100%, ambient sounds to 0%. Ah, bliss.

Smart elements aside, the noise cancellation is very effective. There is no better real-world challenge for NC headphones than being on a plane, so that’s just what I did. With music playing, I could barely hear the plane.

It wasn’t total silence, but the earbuds managed to knock that loud drone right down to a whisper, which was negligible when music was playing. I even managed to fall asleep. That’s a remarkable performance, especially considering this is the first time Sony (or anybody) has put out noise-cancelling wireless headphones of this size. 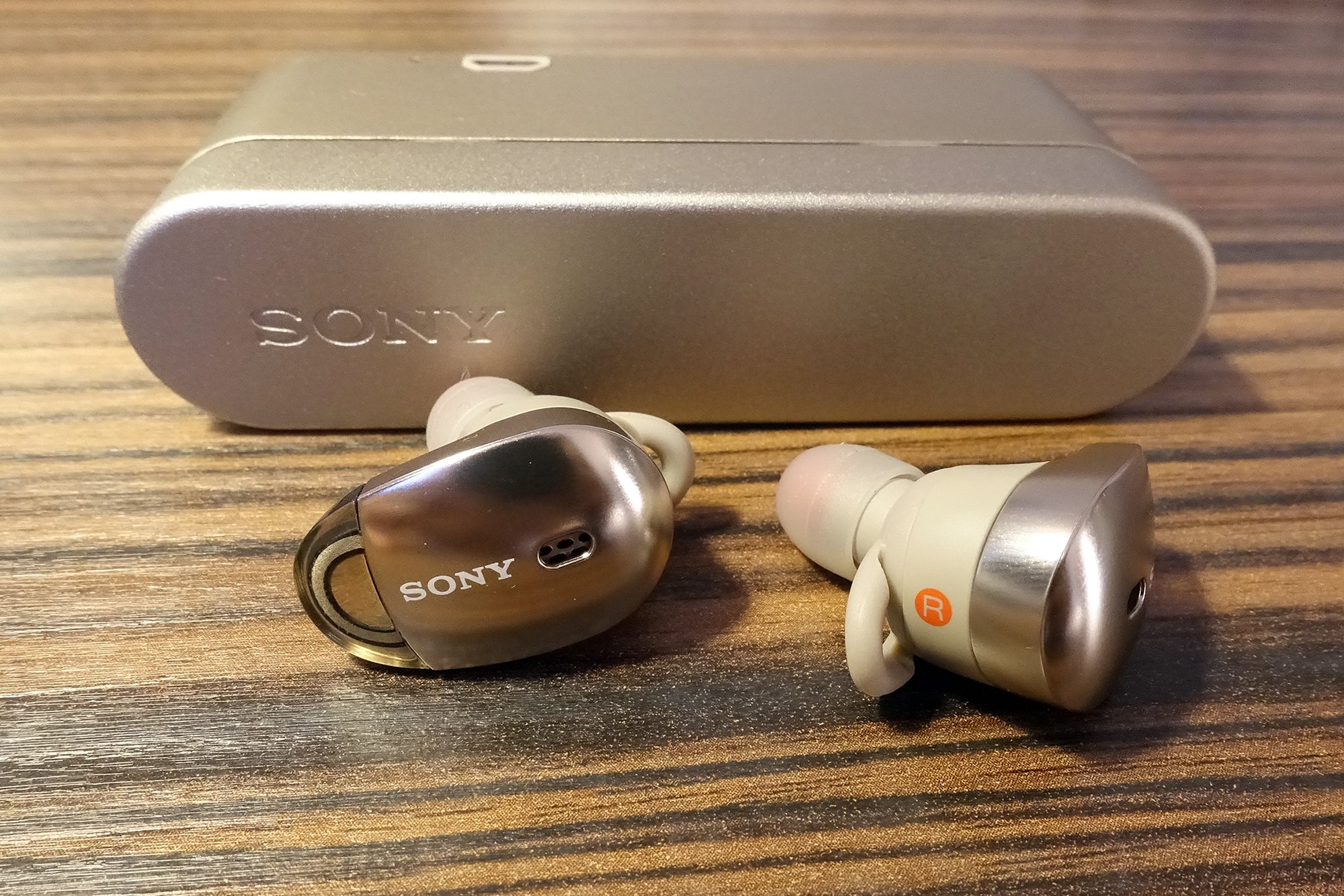 As for audio performance, I’m also hugely impressed. This is the first pair of wireless earbud headphones that didn’t make me feel like I was compromising quality for convenience, or vice versa.

Sony generally excels at clarity and detail, and the Sony WF-1000X are no exception. Whether we’re dealing with vocals or piano or strings, it’s a highly textured sound that leaves you with no doubt about what you’re listening to. It’s also a clean sound, free of the annoying whine that plagues many wireless headphones.

Timing is another thing the WF-1000X excel at. Everything I threw at them – from Kraftwerk to Buena Vista Social Club via Atoms for Peace and Green Day – was met with a rhythmic precision and snap that did the music justice and had my foot tapping.

For such tiny things (armed with just a 6mm dynamic driver) they also do an excellent job with dynamics. There is plenty of emotion in vocals, and kick drums pack a proper wallop. I inadvertently found myself out of reviewing mode and was just enjoying the ride.

It helps that Sony has maintained its typical neutral tonal balance, which doesn’t exaggerate any particular part of the frequency range. From October 2017 you’ll be able to mess with the EQ on the app, but I see no need to. The midrange is direct yet doesn’t hog the attention; the bass reinforces the music without being overbearing.

If I had to nitpick, I’d say I could do with a greater sense of space. But it’s not as if the sound feels cramped and cluttered – it’s easy to make out where all the instruments go, thanks to a solid stereo image. 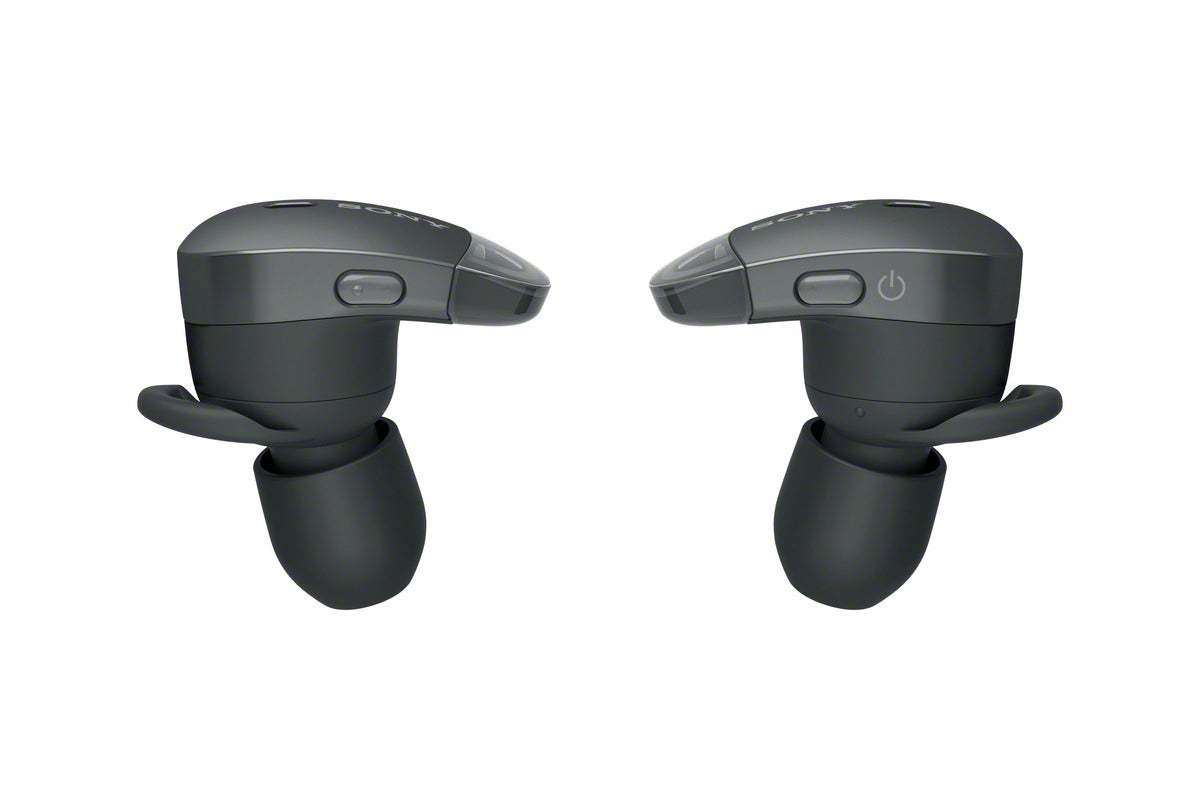 The Sony WF-1000X excel at wireless connectivity, noise-cancelling and audio performance – all in a package small enough to comfortably fit in your ear. I’m not sure there’s much more I can ask of them. Can they replace wired headphones entirely? No, because that’s not always practical. But if you want freedom of movement and you want your music to be a haven from the outside world, look no further.

Without doubt the best wireless earphones in the world.