The Samsung Galaxy Alpha is official and with a September launch date, looks set to land at the same time as the iPhone 6. As big as these tech giants are, they aren’t averse to a few juvenile playground tactics.

Of course, the real question is whether the Galaxy Alpha is worth considering over the Galaxy S5, not the iPhone 6. So what is Samsung’s new Android phone all about, a stop-gap until the Galaxy S6 or something completely different?

As it turns out, the Galaxy Alpha has more in common with its smaller brother the Galaxy S5 Mini than the big daddy of Android. But what do we have to look forward to?

The most dramatic difference between the Galaxy Alpha and Samsung’s existing line-up is design. Virtually all of Samsung’s phones try to be as thin as possible, using curved edges to make them feel even thinner than they actually are.

However, the Galaxy Alpha has a much boxier design, with more rectangular, bevelled edges that are the spit of those on the iPhone 5S. Remarkably, the Alpha appears to be even thinner than the iPhone, measuring in at 6.7mm thick.

This could be a good improvement for future Galaxy phones, including the Galaxy S6, as the naff contoured silver plastic sides were things we didn’t really like in the current Galaxy S5.

The Alpha doesn’t see Samsung performing a full 180 here, though. You still get the dimpled plastic back, a Samsung-style camera lens and a front-on profile that’s just like the company’s other Android phones. It’s only the sides that have stepped out of line. 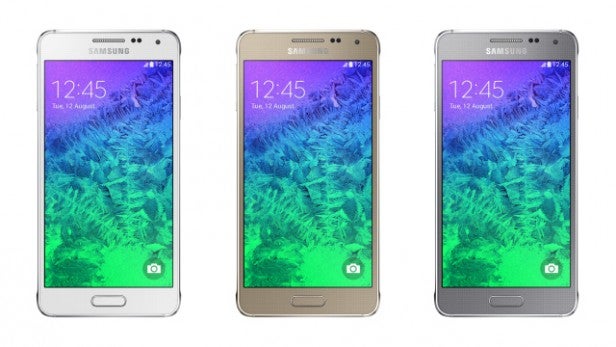 But what are those sides made of? They’re metal, and will give the phone that bit of high-end design gloss that has to date been missing from Samsung’s Android phones.

Leaked pictures correctly confirmed that the Samsung Galaxy Alpha has a ring of metal that snakes around the phone, effectively replacing the plastic surround used in the Galaxy S5.

As with the Galaxy S5, the back panel pops off and will still be made of skinny plastic, so only the extreme edges are going to benefit (potentially) from the cool and hard feel of aluminium.

But would it even be aluminium? We’ve seen few good products made using magnesium alloy recently, which is lighter than aluminium while still being tough. Check out the Surface Pro 3 and Xiaomi Mi3 for a couple of good examples of this in action. Whatever metal it is, it has to be better than the shiny chrome plastic used in the Galaxy S5.

The possibility of a part-metal design makes the Galaxy Alpha sound like a step up from the Galaxy S5, but it actually isn’t one in other respects. It’s more like an upper-mid-range phone that slots in between the Galaxy S5 and the Galaxy S5 Mini.

Thanks to the AMOLED screen tech used in both phones, the Galaxy S5 is going to seem doubly sharper than the Galaxy Alpha. As Samsung uses PenTile-style screens, any slight lack of pixel power is quite obvious.

One worry is that Samsung might not give you the option to manage the colour saturation in the screen. In other mid-range phones of this year, such as the Galaxy K Zoom, you’re stuck with over saturated OLED colours, where top-end phones like the Galaxy S5 let you tame them to make them more accurate – and less of a strain on the ol’ retinas. 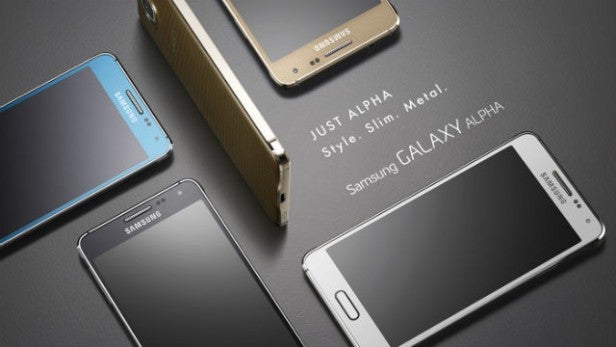 Samsung Galaxy Alpha vs Galaxy S5: No SD slot this time around

Samsung seems to be experimenting with a few things in the Galaxy Alpha. Even the name itself makes it sound like a prototype.

We like the use of metal on the phone’s body, but we’re not sure about another change – the Alpha doesn’t feature a microSD slot. Samsung has been one of the few companies to routinely include a memory card slot on all its major phones, so we’re disappointed to see it lopped off the Alpha.

The Samsung Galaxy S5 has one, after all.

Instead, you’ll have 32GB or 64GB of storage to play with instead. 64GB versions of the Galaxy S5 and Galaxy S4 are very rare in the UK for a simple reason – why would you pay the extra when a 64GB memory card costs less than £30 these days?

There are reasons – external memory isn’t as flexible as internal memory with an Android device – but this issue has pretty much nixed the sales chances of 64GB versions of Samsung’s phones.

A non-expandable Alpha will let Samsung see how much people really want 64GB phones, as well as testing the kind of backlash it’d receive for – say – leaving one out of the Galaxy S6.

Samsung’s phone’s often use Snapdragon processors these days. The Galaxy S5 uses a Snapdragon 801 processor, the same family used by the Xperia Z2 and HTC One M8. The Alpha joins the S5 in packing the same Snapdragon-based CPU with 2GB RAM and runs on Android 4.4 KitKat.

It will also come in a octa-core version although that version is unlikely to be seen here in the UK.

It’s a terribly impressive-sounding octo-core processor – yes, one with eight cores. However, it’s not going to be twice as fast as the Samsung Galaxy S5’s CPU.

Four of the cores are performance cores, designed to kick in when the Galaxy Alpha is doing something a bit strenuous. The other four are more power-efficient cores, there to help keep battery life solid. Last time we saw one of these 8-core processors, the phone could only use four at a time. But we’ve been promised the next-gen versions will be able to use all eight at once.

The fast cores run at 1.8GHz, the slower ones 1.3GHz. However, the different is more to do with architecture than clock speed.

One other little snip we’ll see in the Galaxy Alpha is the camera. It’s rumoured to have a 12-megapixel main sensor while the Galaxy S5 uses a 16-megapixel one with fancy ISOCELL sensor tech. This is something Samsung has devised.

There’s a 2.1-megapixel front-facing camera and a HDR mode to help brighten up images. The Galaxy Note 4 is rumoured to have a 12-megapixel sensor as well, along with OIS. And that phone won’t have a bad camera.

There’s no sign of the Alpha adopting OIS too, but a 12MP sensor with stabilisation would have made a pretty handy combo. Still, we expect the Galaxy S5 to be superior, especially as it uses a fairly large 1/2.5-inch sensor. 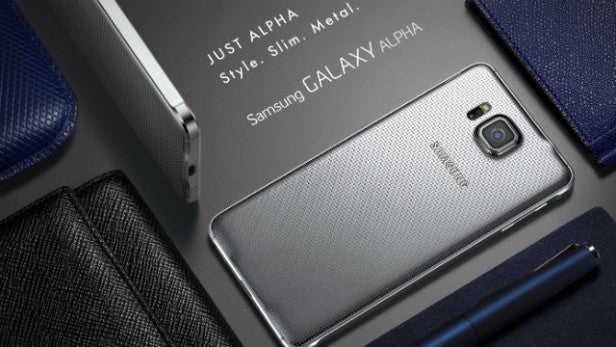 As it has a smaller, lower-resolution screen, the Samsung Galaxy Alpha can afford to use a smaller battery than the Galaxy S5. It reportedly has a 1,860mAh battery, up against the Galaxy S5’s 2800mAh.

It’s way smaller in the Alpha, and we do have to wonder whether you’ll be able to get the sort of 2-day stamina that’s possible with the Galaxy S5 on a Galaxy Alpha. We’ll have to wait to see it up close to find out.

For all the phone’s cuts, the Alpha hasn’t gotten rid of all the Galaxy S5’s extra bits.

The fingerprint scanner and heart rate sensor introduced by the Galaxy S5 are still in place in the Galaxy Alpha. We didn’t find them to be particularly worthwhile additions in the S5, but perhaps they’re dead cheap to implement anyway, now that Samsung has made tens of millions of the things.

The Samsung Galaxy Alpha is not a replacement for the Galaxy S5. In many respects it’s a lower-end phone, sitting in-between the Galaxy S5 and S5 Mini in terms of spec.

However, it looks like the phone is going to be used as an experiment with a few new ideas. Using real metal in the body and testing out reactions to an SD card-free phone are all things worth watching. With some specs that don’t really excel above phones that will probably end up being much cheaper, like the Motorola Moto G, though, we’re not convinced this is going to be an all-out smash hit.

Next, read our Galaxy S5 tips and tricks round-up