Which small tablet is best?

The iPad mini 2 Retina and Google Nexus 7 2 are the best small tablets in the world right now. They set the standard for what we expect from a portable tablet. And they are both fantastic.

However, you’d be mad to buy both unless you have money to burn. We’ve compared the two to find out which is right for you.

The iPad mini 2 and Nexus 7 2 have similar design blueprints, but are built to different levels of aesthetic rigor. They both have super-slim screen surrounds to the sides of the screen, and attempt to become as slim and light as possible.

However, with more budget to play with and, no doubt, a larger design team, the iPad mini 2 Retina is a cut above. It’s made from aluminium, the Nexus 7 2 from plastic. And as a result, the iPad feels like the more expensive, more impressive tablet.

All of these design clashes occur at a very high level, though. The Nexus 7 2 feels great, just as the iPad mini 2 seems light. There are no real losers in this fight.

Throwing away all practical concerns for a minute, though, the iPad mini 2 is significantly better looking than the Nexus 7 2. As usual, Apple has that one in the bag, though it’s hardly the deciding factor. 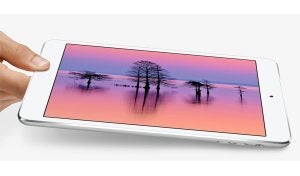 Both the iPad mini 2 and Nexus 7 2 have the same size screens as their predecessors, but in most other ways they are far, far superior. Both of these displays are class acts.

Sharpness is particularly impressive in these tablets, but contrast, colour and top brightness are excellent, too. The design comparison may have been tricky, but this is much harder.

It’s more beneficial to compare how these screens work in real-life performance.

A non-widescreen aspect gives the iPad more screen compared to the perception of how large the tablet is as a whole. This is very beneficial for games, for web browsing and for using apps.

However, it’s less clean-cut when watching movies. 16:10 is a much more cinematic ratio than 4:3, meaning you’ll either get smaller ‘black bars’ when watching a film, or will have to crop out less of the image to use the whole screen. 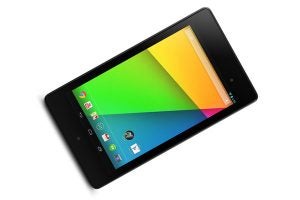 Apple hasn’t yet told us the full specs of the iPad mini 2 with Retina display. We don’t know the clock speed, or how much RAM it has, but we do know it’s a dual-core processor similar to the one used by the iPhone 5S – an Apple A7 CPU. It’s one of the first 64-bit tablet/phone processors.

Next to it, the quad-core Nexus 7 2 sounds a lot more powerful. But it isn’t.

Not only is the Snapdragon S4 Pro family not the latest generation of Snapdragon processor (Snapdragon 800 is more up-to-date), it’s 32-bit where the Apple A7 chip is 64-bit. Our benchmarks show that the A7 chip of the iPhone 5S is among the fastest mobile chips currently available, though it’s a tiny bit slower than the Qualcomm Snapdragon 800 in some tests.

This doesn’t make the Nexus 7 2 slow by any means, but the iPad mini 2 with Retina display walks this one.

Neither of these tablets has a memory card slot. You have to make do with the inbuilt internal memory, because that’s all you’ll get.

There are a few more options with the iPad mini 2 with Retina display, because it’s a higher-end tablet in general. iPad mini 2s start at 16GB and max out at 128GB. This is the first time a smaller iPad has been available at such high capacities.

The Google Nexus 7 2 offers two choices – 16GB or 32GB of memory. This may sound limiting, but they are the right choices for a tablet selling at the Nexus 7 2’s price. And you pay less of a premium for additional storage with a Nexus. You pay £40 to go from 16GB to 32GB with a Nexus, and £80 for the same change in an iPad.

Perhaps the most important difference between iOS and Android for the tech fan is the range of apps and games available for the systems.

There are roughly the same amount of apps and games on their respective app stores – likely a million plus at this point. However, the App Store still offers a greater breadth and depth of content, particularly where tablet optimised apps are concerned.

The benefits of Apple stick out in particular when looking at creativity apps such as music-making tools, and games – whether high-end 3D blasters or casual jewel-matchers. The choice is simply better with Apple.

Neither is a photo superstar. However, there’s more to a camera than simple specs. Apple claims to have improved the backside illumination of the 5-megapixel main camera of the iPad mini 2, which should result in superior low-light performance.

Given that we weren’t hugely impressed by the camera of the Nexus 7 2, we expect the iPad mini 2 will offer superior performance. We’ll be back with the conclusive verdict once we’ve given the iPad the full review treatment. 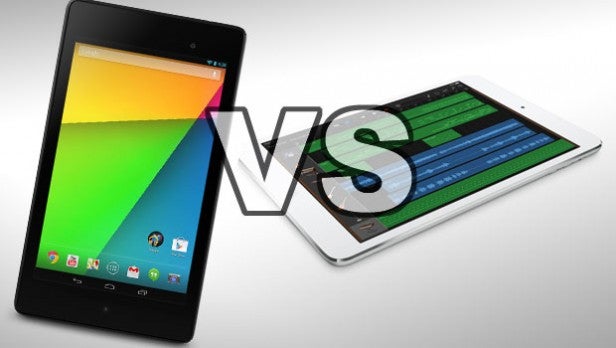 Impressions: which should you buy?

There’s little doubt about it – if you don’t need the flexibility Android brings, the iPad mini 2 is a better tablet than the Google Nexus 7 2. It’s more powerful, prettier and feels higher-end. However, it’s also more expensive and both these tablets could knock out most of the other competition with a single punch. We’d be happy with either. If money is no object, opt for an iPad. But if it is you can’t go wrong with the Nexus.

Next, read our in-depth comparison of the Xbox One vs PS4