The iPad Air, once called the iPad 5, is Apple’s flagship tablet. It sits above the iPad mini 2, but Apple has now reintroduced the iPad 4 that the iPad Air replaced as the alternative to it instead of the ageing iPad 2. Does this make the ‘cheaper alternative’ iPad worth considering again?

The iPad Air is 100g lighter

Easily the most important change in the iPad Air is its new design. Taking inspiration from the iPad mini, the screen surround is much smaller than ever before, and the tablet is much lighter and thinner.

If the iPad mini won you around in the last generation, the full-size one is seriously worth considering this time.

It’s less than 7.5mm thick and weighs under just 469g. That’s a good millimetre and change thinner, and more than 100g lighter than the iPad 4. Just as important, it’s significantly less wide and less tall than the last one. This makes the iPad Air much more portable and much more compact.

The iPad Air has a faster processor, but does it matter?

Like the iPhone 5S, the iPad Air has made the jump to 64-bit with its processor. The tablet uses a new Apple A7 chip, designed to give it roughly the same power as the iPhone 5S, once you take into account the masses of extra pixels the tablet needs to account for. We believe it may be clocked faster iPhone 5S’s CPU – as the more pixels a device needs to render, the more power it’ll need.

The benefits of the A7’s ’64-bit’-ness won’t become truly apparent for a while, but that doesn’t mean it’s not significantly more powerful than the 32-bit Apple A6X chip of the iPad 4 in its own right. You’ll get better graphics, and better gaming performance (and support) a year or two down the line with an iPad Air. And it already lets you use more tracks in the Garageband music maker.

However, the great majority of people will probably find this doesn’t matter much to them day-to-day. The iPad 4 remains a very snappy and reliably responsive tablet, so unless you’re playing the latest games there’s no need to lose sleep over this.

And they have (more or less) the same  screen

It’s all change for the iPad Air in several respects, but the appearance of the screen hasn’t changed a great deal. The iPad Air has a 9.7-inch ‘Retina’ display of 2,048 x 1,536 pixels.

Contrast, colour reproduction and sharpness were all pretty great in the iPad 4 – and they’re just as good in the new one. Both tablets use IPS-type screens, which offer great angled viewing, making them perfect for sharing a movie on (aside from that they’re still pretty small).

The iPad screen used to be a king of displays, but in the last year or so rivals have started to catch up. The Google Nexus 7 2 is a great example – its 7-inch Full HD screen makes the tablet a real bargain. Apple’s iPad may be among the best, but it no longer leads the pack in the way it used to.

They run the exact same software and apps

The iPad Air is cleverer, faster and slimmer than the iPad 4, but will it feel completely different to use? Not a chance.

Both tablets use iOS 7, the software it shares with the iPhone 5C, iPhone 5S and iPad mini 2. All you’ll miss out on with an iPad 4 are the games twelve months or so down the line that choose to drop support for ‘older’ tablets like the fourth-gen iPad, but that’s a long way away yet.

The iPad Air has a better camera

There’s no flash still, though, so it’s a fairly minor change in terms of how much people will notice it. 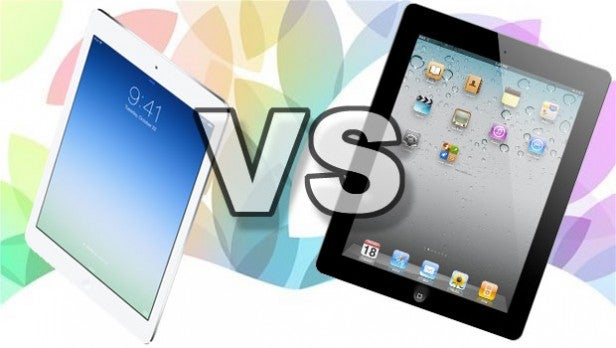 iPad Air vs iPad 4: Which should you buy?

The final key difference between the two is the iPad 4, or iPad with Retina display as Apple calls it, is only available as 16GB Wi-Fi model or 16GB Wi-Fi Cellular. If you want more than 16GB of storage you’ll have to buy an iPad Air.

The price difference, meanwhile, is quite small. A 16GB iPad now costs £329 vs. the £399 of the 16GB iPad Air. That’s a saving of £70. Our verdict? If you’re really not bothered by the extra weight of the iPad 4 then the saving is probably worth it, but in our experience the design and lightness of the iPad Air is transformative. If you can afford an extra £70, we say spend it.

Which tablet are you most likely buy? Let us know in the comments below.