LG TVs 2017: Everything you need to know about this year’s lineup

If you’re looking for a new TV and were considering buying LG, this is the page you need. Here’s a comprehensive list of the key models, along with their features and prices – from the top-end 4K OLEDs to more bog-standard LED LCD sets. I’ll get into the differences below, but first, here’s LG’s 2017 TV lineup in full. Skip past if you just want to get to the model explanations and product reviews.

That’s all the models LG has confirmed so far, but I’ll update the list as more information is announced – I’ve been told additional pricing is coming soon.

In the meantime, here are a few key points that apply to the entire line-up, which should provide a bit of context.

Alternatively, scroll down for a more detailed breakdown of the individual models. 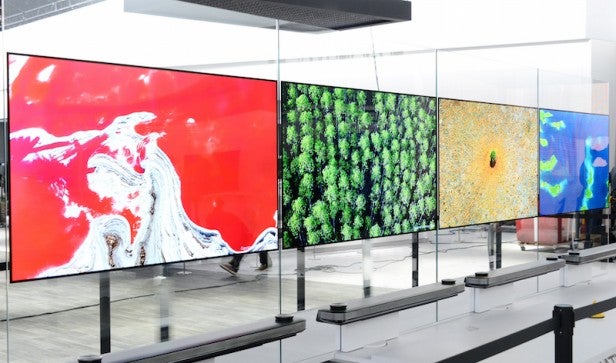 This is to be expected, as for years now, LG has been the only one pushing and developing the technology, while others stuck with LED LCD screens.

That commitment seems to have paid off, because now LG is providing panels to Sony and Panasonic to make their own OLED TVs.

There are many reasons to buy OLED, but there is one weakness that LG’s LCD-wielding rivals like to point out: peak brightness. OLED just doesn’t get as bright as LCD can, although its ability to reach properly deep blacks has always been an effective counter-argument.

But now, the argument for OLED is stronger than ever, because LG has managed to bump the peak brightness to about 1000 nits, which is on par with the top LCD models from 2016.

LG loves to bang the OLED drum, but it is also putting out LED LCD models. There are six product lines, ranging from 43 inches to 86 inches, all of which sport IPS panels.

High Dynamic Range (or HDR) gives you a wider range of colours, brightness and contrast, and is the latest must-have feature. But it’s still early days and the AV industry at large hasn’t decided on one format to use, leading LG to take a belt-and-braces approach.

It supports the common HDR10 format and the cinema-favourite Dolby Vision, plus LG’s own Active HDR, which is supposed to add dynamic metadata (found in Dolby Vision) to HDR10 sources.

As LG charges ahead with future-proofing its lineup, it has decided to ditch both curved screen designs and 3D technology – I’m told it’s because not enough people wanted them.

LG makes the best TV software, as far as I’m concerned. The WebOS menu system came up with many tricks that are now standard, but still nobody does it quite as smoothly.

Now we’re on to WebOS 3.5, which doesn’t change all that much but adds performance improvements and a couple of nice tweaks.

My favourite? The ability to assign apps to the number buttons on the remote. Now you can have Netflix on speed dial. 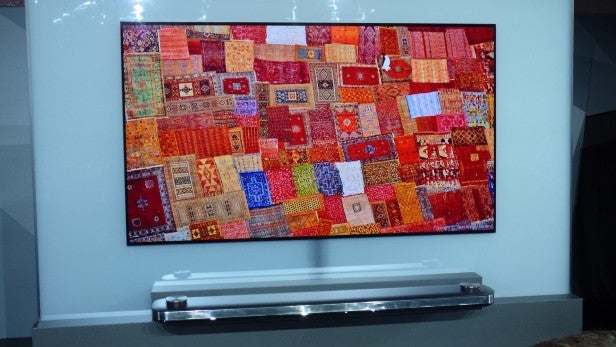 I’ll start with the top of the food chain: the OLEDs. LG tells me that all the models share the same panel, chipset and processing, and that picture quality should be the same.

They all claim a peak brightness of about 1000 nits. They can all handle 10-bit colour.  And they all feature the same polarising filter, used on top of existing anti-reflective film to improve the contrast ratio. The difference, then, is in the aesthetics and sound system.

At the very top is the W7 OLED, where the W stands for ‘wallpaper’. It’s so thin it’s slightly flexible. Everything else – power, sockets, sound – goes into a large Dolby Atmos soundbar. It’s an incredible design, which is why LG has given it ‘Signature’ status.

The other Signature TV in the range is the G7 OLED. This is similar to last year’s OLED65G6 in that it has super slim picture-on-glass design, and a folding sound base that can be flipped back to act as a wall mount. 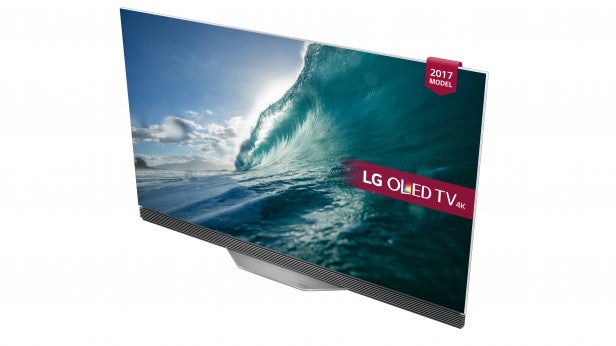 The E7 is the slightly more subtle version of this, with the same picture-on-glass design but a static soundbar base that doesn’t flip or transform. This is the follow-up to last year’s OLED65E6. You will find it in John Lewis from the beginning of May 2017.

The C7 is a departure from its predecessor the C6, because it’s not curved. LG has given up on curved screens and so the C7 is flat. The only curve you get here is on the slightly rounded bezel, painted black so you’ll focus on the picture. LG tells me you’ll find this one in Currys PC World.

The B7 is the ‘entry level’ model, although it has the same retail price as the C7. This has a slightly louder design than the C7, with a sweeping arc stand and silver trimmings instead of black. 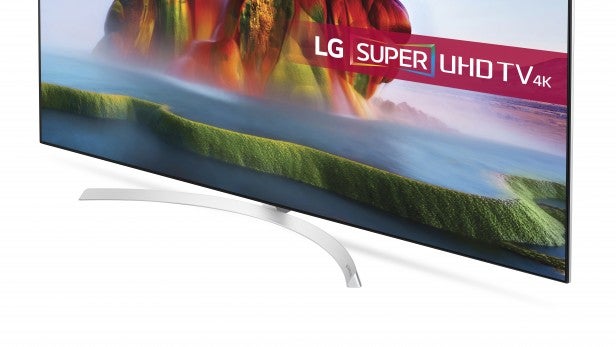 LG is keen to point out it’s not just about the OLED – it takes LED LCD TVs seriously too. This is the only route to take if you want a massive TV, because the sizes here go up to 86 inches.

The LED LCD market is fierce, and LG hopes to differentiate itself with the use of ‘nano cell’ technology – a rival to the quantum dot system used by Samsung. LG says the uniform 1nm size of its nano cells means it can achieve more accurate colours and deeper blacks, as well as improve viewing angles.

LG doesn’t want you thinking this is some cut-price alternative to OLED – even the junior model here, the SJ810V, has a sound system by Harman Kardon.

Then there’s the SJ850V, which is a step up with a frameless panel design, which is LG’s way of making this LED LCD look more like its OLED design. The SJ950V boasts the best contrast of the lot. 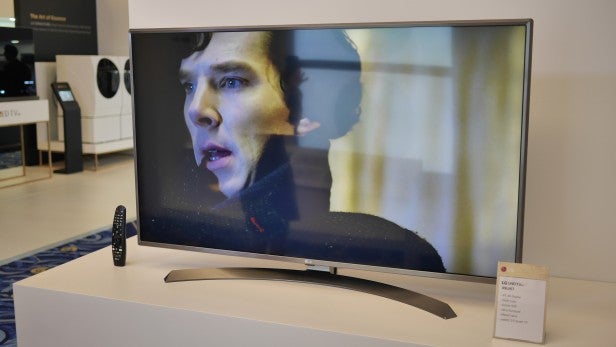 The UJ630V, UJ634V and UJ635V all have LG’s Active HDR, which is supposed to add dynamic metadata to HDR10 sources, even without Dolby Vision.

At the top of this batch is the UJ750V, which adds a premium metal construction and Dolby Vision support.

Not everyone wants a 4K TV, and LG is still making plenty of HD models for those with more basic needs or smaller spaces, e.g. for the bedroom or kitchen.

The LJ624V, LJ614V and LJ594V all have the WebOS3.5 interface as a minimum. For those wanting the no-frills option there are the LJ515V and LJ510B, which don’t have any smart functionality whatsoever.

Which LG TV tickles your fancy right now? Share your thoughts in the comments below.