The LG C7 most affordable OLED model from LG’s 2017 range, but don’t let that fool you into thinking it’s any less good than its more expensive siblings.

Video specifications are on par with the top end: it’s a 55-inch OLED panel with 4K Ultra HD resolution, HDR support, Dolby Atmos decoding, plus the latest version of LG’s webOS smart TV platform. That’s £3000 for the same video specs as you get on an £8000 model, the LG OLED65W7 – just minus the very flashy design.

Along with the  £3000 LG OLED55B7, this is LG’s way of opening up the OLED market for those who don’t necessarily want to remortgage their home.

In the UK, the C7 is available exclusively from Currys PC World.

Last year’s C6 was curved, so you’d expect the same from the C7, but no – the OLED55C7V is vehemently flat. LG has decided against offering any bent TVs in its 2017 lineups, since  market research show waning demand for the format.

The C7’s super-slim OLED panel is framed by a black bezel, which is slightly different from the design of the OLED55B7, which has a bit of silver. For viewers who prefer to watch films in a darkened or even pitch-black room, the C7 may represent the better choice, since it blends into darkness more seamlessly.

Although the OLED screen itself is extremely thin, there’s a rearward bulge halfway down the chassis to accommodate the TV’s processing and speaker components.

The LG OLED55C7V sits on an “Alpine” stand that’s perched up slightly, and carries a brushed metallic silver finish. I prefer the C7’s stand to the crescent stand on the B7 – it’s more stable and doesn’t take up too much space on an AV rack,

The remote control for the OLED55C7V is well designed and easy to use. There’s a gesture-based mouse pointer feature that integrates seamlessly with the webOS 3.5 portal, providing a responsive and intuitive experience. There are also two dedicated buttons that allow for one-click access to Netflix and Amazon. 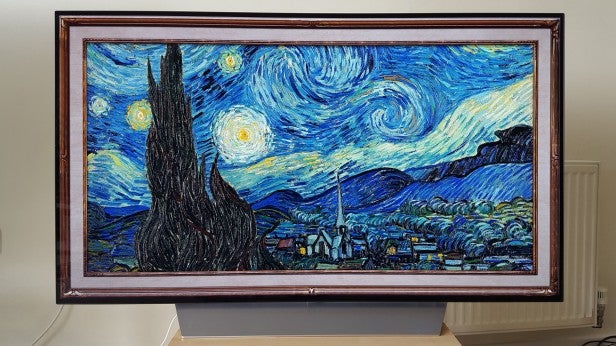 Upon firing up the LG OLED55C7V for the first time, a series of help screens guide you through initial setup of the television, aided by a cute Bean Bird animated character.

The default picture preset is Eco, which doesn’t deliver the best picture for viewing in the home. Turn this off.

For a start, the colour temperature is far too blue, causing skin tones to look pasty and unnatural. Also, many undesirable video processing options are switched on, thus degrading the image fidelity. Graininess stems from excessive edge enhancement; smearing from noise reduction; and brightness fluctuations from dynamic contrast.

The easiest way to achieve a more pristine picture is to switch to Cinema mode instead. As suggested by the name, this picture preset is designed to more faithfully reproduce the quality of movies screened in cinemas, but broadcast content including live sports will benefit from it too.

If you’re used to a blue colour temperature – from long-term PC use – whites in the Cinema mode may initially look very yellow to your eyes. I’d encourage you to stick with it for at least a week, because this yellowish white is actually the more accurate white point used in video capture and mastering. But if you still can’t get used to it, try changing Colour Temperature, under the White Balance submenu, to “Warm1” or even “Medium” to obtain “whiter” whites. 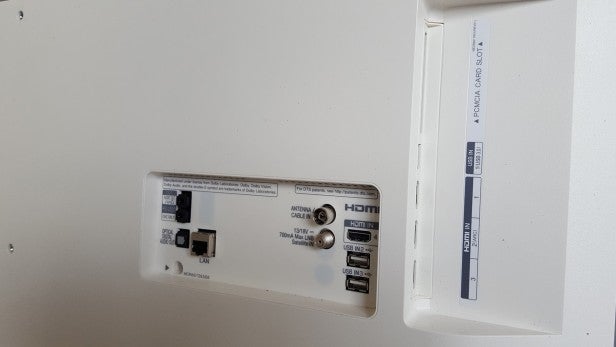 OLED is a self-emissive technology, which means that every pixel can be turned on and off independently of one another. As a result, bright whites can co-exist alongside truly inky blacks, contributing to stunning contrast performance.

Being able to generate absolute blacks helps colour take on a more vibrant appearance. This is because black underpins the entire image, and greyish blacks wash out the colours. The reason OLED colours generally look richer than LED LCD’s is because the former’s true blacks act as an ideal base for colours to pop, whereas the latter always need to be illuminated by some form of backlight to produce colour. Light pollution, essentially.

OLED TVs such as the LG C7 range also deliver very wide viewing angles, which almost don’t suffer from any decrease in contrast and saturation off-axis. You can sit almost anywhere in the room and not have your picture fade out.

Last year’s OLED screens tended to exhibit a purplish tint when hit by light. To rectify this on the C7 and maintain true blacks even in the presence of ambient light, LG has implemented a “Neutral Black” anti-reflective filter. In practice, there’s still a very slight magenta cast if you stare hard enough, but it’s significantly reduced over last year’s models.

In terms of HDR, the LG OLED55C7V – like the rest of the company’s 2017 OLEDs – supports the open-standard HDR10, broadcast standard HLG (Hybrid Log-Gamma), proprietary Dolby Vision and fledging Technicolor formats. While the first three are available directly out of the box, the last will be added through a software update in the near future.

Like almost every new TV released in 2017, the LG OLED55C7V doesn’t support 3D. The number of connection inputs available on the television should satisfy most users: four HDMI sockets specced with HDMI 2.0b and HDCP 2.2 compatibility, not to mention three USB ports, one of which is the faster USB 3.0 version.

Having freshly reviewed the 55-inch LG OLED55B7, writing about the OLED55C7V’s picture feels like déjà vu. The company has put the same in-house chipset into all its 2017 OLEDs, ranging from the B7 and C7 series to the step-up E7, G7 and even the flagship Signature W7 series. So it will come as no surprise that the images delivered by all these sets are very similar.

Comparing the OLED55C7V beside the OLED55B7 in my test room, I was able to reproduce the same processing quirks on both displays. But first, let’s start with the good.

Just like the B7, the C7 provides greater insight into low-light scenes than any other LG OLED TV that’s been released before. This improvement stems from three factors. Firstly the TV’s Brightness control is more refined, letting owners set video black level correctly without crushing shadow detail. Second, where previous LG OLEDs transitioned from blacks to very dark grey too slowly, obscuring shadow detail, it’s more accurate on the OLED55C7V.

But perhaps the biggest contributor is better above-black processing, which results in less noise in dark scenes. Without pixellation and fizziness breaking up the image, low-light detail comes through with superior definition and clarity. At the risk of sounding cliché, viewers can now see shadow within the shadows. 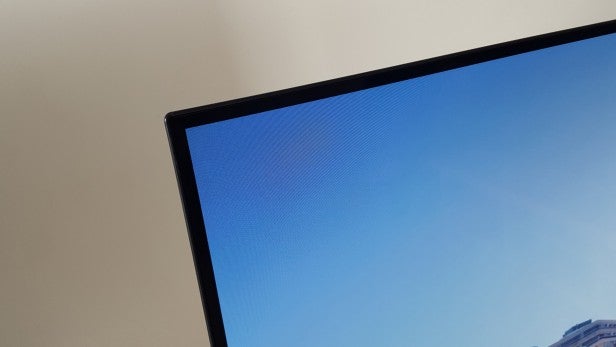 The LG OLED55C7V can also get brighter than its predecessors, owing to a tweak to the display’s ABL (Automatic Brightness Limiter) algorithm. Self-illuminating televisions such as CRT, plasma and OLED TVs can draw a lot of power, or even overheat, if all the on-screen pixels are allowed to ramp up light output unchecked. To optimise energy consumption and prevent component damage, ABL circuitry makes sure light output from an overall bright scene is purposely dimmed to a manageable level.

Last year’s LG OLED TVs – especially in their most accurate, out-of-the-box picture modes – had a tendency to throw a green cast on shadows and mid-tones. This caused skin tones to appear somewhat sickly. Fortunately, this is no longer an issue on the OLED55C7V, with colours coming across rich yet realistic.

Furthermore, the OLED55C7V occasionally applies film-mode deinterlacing to interlaced 50Hz content, leading to tearing or combing artefacts in fast-action sports broadcast such as football. The only sure-fire cure is to send a progressive video signal from your source to the TV. 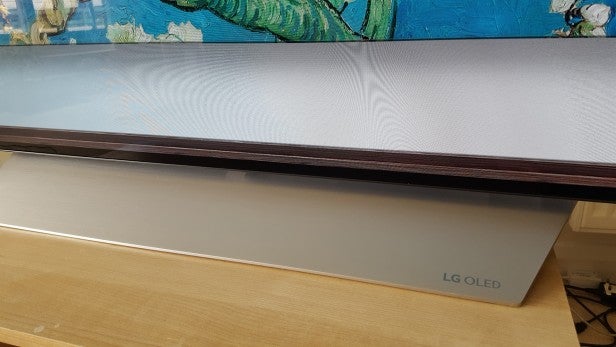 For HDR, peak brightness on our OLED55C7V review sample measured 690 nits on a 10% window after calibration. While this figure was slightly lower than that I extracted from the OLED55B7, I attribute it to panel-to-panel variance rather than a true difference between the B7 and C7 series.

On paper, a peak brightness of 690 nits amounts to only around half of what top LED LCDs can generate, but in some HDR scenes the LG OLED55C7V will actually look brighter in a side-by-side comparison. This is largely because of OLED’s unassailable per-pixel illumination control.

LG’s 2017 OLEDs favour retaining specular highlight details (such as reflections) over maintaining overall scene luminance. As a result, brighter sequences – especially in Ultra HD Blu-rays mastered to 4000 nits – can look too dark. Luckily, the TV features a technology called Active HDR. It’s a static-to-dynamic metadata conversion that can get brightness closer to reference standard in most scenes.

The LG OLED55C7V is a fantastic display for playing games. Input lag measures an ultra-responsive 21ms in Game and PC modes, and blacks remain deep, even in HDR games. Movement of dark objects over a lighter background is also free of smearing and trailing, unlike some LED LCD TVs with slower pixel response time.

Audio quality of the OLED55C7V is above average by flat-panel TV standards. Dialogue is clear, and there’s sufficient dynamic range to satisfy day-to-day viewing. However, for enjoyment of movies, a separate soundbar or home theatre system is still better. While the television can decode Dolby Atmos, it currently doesn’t work on Dolby TrueHD streams from 4K Blu-rays. 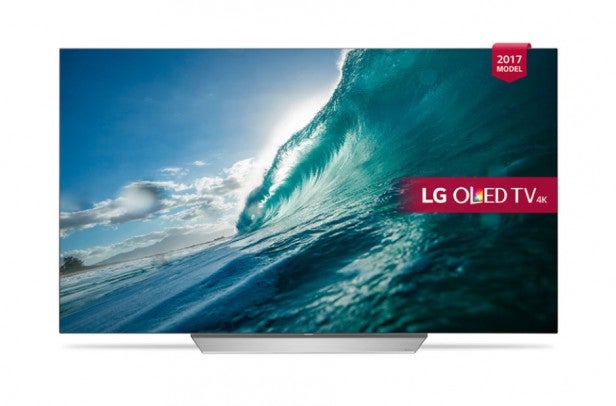 Should I Buy The LG OLED55C7V?

All 2017 OLED TVs from the major brands are going to be quite close in terms of picture performance, since they all use the same panel from LG Display – although one may do something better than others. Video processing on the Sony A1 OLED exhibits the least amount of posterisation and motion artefacts, while I expect Panasonic’s upcoming EZ952 and EZ1002 will deliver class-leading colour accuracy albeit without Dolby Vision.

The LG OLED55C7V strengths are its stunningly low latency for a fabulous gaming experience, bright light output across the majority of luminance range, as well as intuitive and responsive smart TV system. Carrying the most affordable price tag doesn’t hurt, either – this is the most affordable OLED released in 2017. If you want a slightly flashier design with a curved stand, check out the LG OLED55B7.

LED LCDs have traditionally been considered more suitable for use in a bright room or for watching HDR content, but LG’s 2017 OLEDs – including the C7 series – have closed the gap substantially. The Samsung Q9 and Sony XE93 can outperform the LG C7 in real-world brightness emission, but they suffer from haloing or blooming artefacts and restricted viewing angles, and none is significantly cheaper at launch.

The LG OLED55C7V delivers some of the best picture quality you’ll see all year.