The LG OLED55B7V is the joint most affordable model from LG’s 2017 OLED TV range. The similarly priced C7 series were exclusive to Currys stores and are no longer available to buy new.

But before you rush out and buy one, you need to consider how much the LG OLED55B7V’s appeal has been dented by the arrival of new competition since its spring 2017 launch.

Over the years, the no-backlight-required characteristic of OLED has lent itself to some truly exquisite styling, and this applies to the LG OLED55B7V for the most part. The panel is strikingly thin – you won’t see as lean a design from LED LCDs, which have to be made up of a back or edge lighting unit, liquid crystal array, colour filters, light guide plates and a host of other components.

The black bezel is suitably slim, and the OLED screen is surrounded by a brushed metallic silver trim, which extends to the back. The bottom half of the rear protrudes by necessity to house the TV’s brains, connection ports and speakers.

To heighten the picture immersion, LG’s design team has taken the bold decision to remove any logos from the screen. Instead, ‘LG OLED’ is emblazoned on the left edge of the B7’s stand.

It’s a crescent stand, shaped like a curved Toblerone, although I’m reliably informed the composition is entirely metal, with no hint of chocolate. It could be my assembly skills, but my review unit tilted forward ever so slightly, regardless of how hard I tightened the screws. You may have better luck.

The remote control that’s bundled with the LG OLED55B7V isn’t too different from last year’s. It’s an easy-to-hold oval wand with the company’s intuitive Wii-like mouse pointer. It works beautifully with the onboard WebOS 3.5 Smart TV platform. New for 2017, there are dedicated Netflix and Amazon buttons. 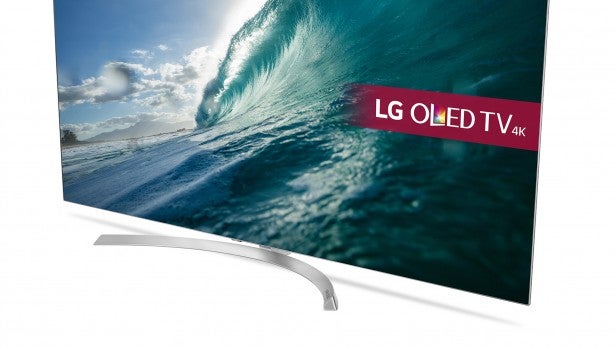 I’ve reviewed and tuned hundreds of TVs, so I usually have little patience for first-use help screens, but LG’s Bean Bird animation always puts a smile on my face.

The setup prompts are sensibly laid out yet fun, and completing each step brings a soaring sense of satisfaction thanks to Mr Bean Bird’s assistance.

If you choose Home rather than Shop mode on one of the last steps, you’ll invariably end up in Eco mode, the default picture preset on any 2016 and 2017 LG OLED. This looks far too blue, and has too much damaging picture processing going on. If you’re a video enthusiast who values colour fidelity, head straight to the Cinema preset, which looks far more natural.

Viewers who are not used to accurate video colours will likely find Cinema mode to be too yellow, initially. As a compromise, try the Standard mode, but with Sharpness toned down to reduce grain and fizziness, not to mention TruMotion disabled to clear up motion hiccups.

The ISF Expert modes provide the most number of picture-affecting controls to align the TV’s contrast and colours as close as possible to industry standards. Excessive adjustments in these expert menus can paradoxically introduce artefacts and degrade the picture. 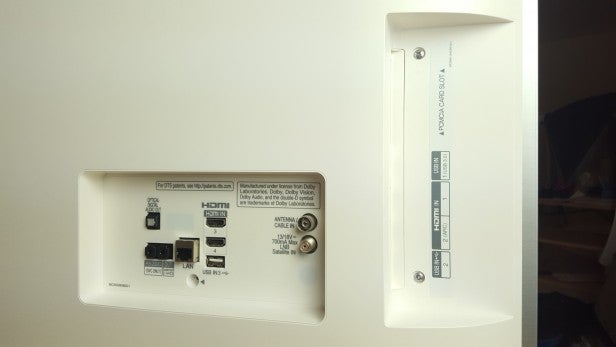 When theLG OLED55B7V came out in 2017, OLED was for me the most advanced panel-illumination method available on consumer-grade televisions. Samsung’s 2017 iteration of its rival QLED TV was still based on problematic edge-lit LED LCD technology. Samsung’s 2018 QLED TVs, however, have provided a much sterner challenge to OLED technology.

This is because the new Q9FN and Q8DN flagship models use direct backlighting with local dimming, making them much more effective, compelling rivals for OLED technology. More on this later. You can read more about Samsung’s TV technology in our guide: What is QLED?

Getting back to the OLED technology in the LG OLED55B7V, the benefits of being able to switch on and off every one of a 4K OLED panel’s eight-million-plus pixels independently of each other are numerous. You not only get absolute blacks, but such inky blacks can be rendered without being contaminated or washed out by neighbouring bright elements.

LG has also implemented a ‘Neutral Black’ polariser on all its 2017 OLEDs, which aims to maintain true blacks in ambient light conditions. The 2016 LG OLED TVs, by comparison, tend to exhibit a magenta tint in darker areas when light hits the screen. 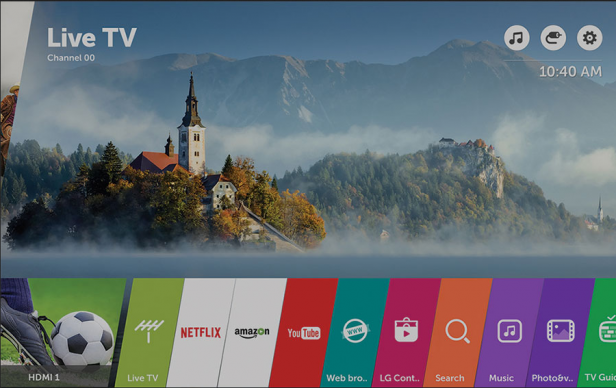 The self-emissive nature of OLED also delivers extremely wide viewing angles that don’t really suffer from any significant drop-off in contrast and saturation, making it better than LED LCDs for use in a large room with different choices of seating positions.

A quick rundown on these HDR formats: HDR10 is the open standard used in current Ultra HD Blu-rays and Netflix 4K/ Amazon Video streaming. HLG is on course to be the de facto broadcast HDR standard in the UK and Europe. Dolby Vision is a proprietary HDR system that uses dynamic metadata for scene-by-scene, or even frame-by-frame, optimisation. And last but not least, Technicolor is still a (relatively) fledgling format in terms of consumer recognition and content availability.

Four HDMI 2.0b ports with HDCP 2.2 compliance are provided, allowing owners to hook up the equivalent number of HDR-capable devices such as 4K Blu-ray players or PS4 Pro/Xbox One S game consoles. None of the 2017 OLEDs from any brand support 3D, and the LG OLED55B7V is no exception. 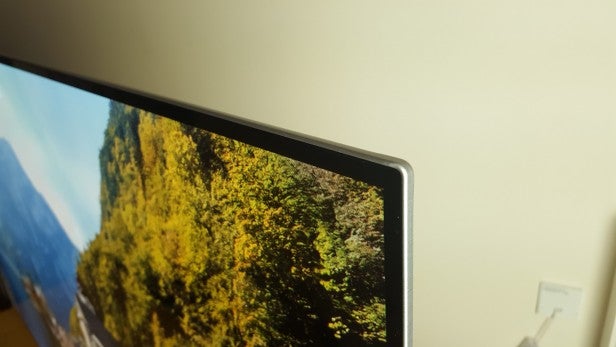 Last year’s LG OLED TVs already ruled the roost when it came to SDR (standard dynamic range) image quality, yet somehow the company has still managed to find ways to improve on them. The LG OLED55B7V used the same chipset and OLED panel as the company’s Signature W7 OLED. All of LG’s 2017 OLEDs should deliver essentially identical picture quality.

One of the most significant improvements comes in the area of above-black handling. Traditionally, OLED TVs have always struggled with striking a good balance between impossibly rich blacks and clean, visible shadow detail, since there’s electronically a big jump between OLED’s ‘off’ stage and very dark grey.

The B7 is the best effort yet from LG in this regard, depicting low-light detail with noticeably less noise and pixelation than last year’s models. There’s little to no improvement in near-black uniformity, with thin vertical banding visible on very dark grey test patterns in a pitch-black room, but it didn’t bother me in real-life viewing.

Things look better too at the other end of the contrast-ratio spectrum. The maximum peak brightness on full-screen white hasn’t been raised, but what LG engineers have done is to tweak the Automatic Brightness Limiter (ABL) algorithm on the LG OLED55B7V to be less aggressive than before.

ABL is a circuitry that dims the screen as the average picture level gets higher. It’s designed for optimal management of power, brightness and longevity. With reduced ABL, bright scenes will appear brighter on the 2017 LG OLEDs, contributing to the perception of higher contrast. 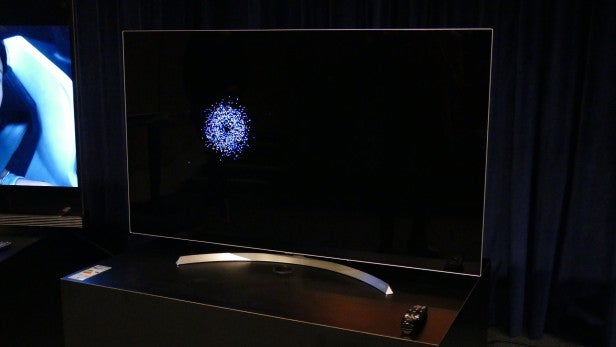 Backed by true blacks, which act as an ideal canvas, colours pop with stunning vibrancy and realism on the LG B7. Flesh tones in very dark scenes can look a little ruddy, though.

The LG OLED55B7V doesn’t handle interlaced content (for example 1080i 50Hz from Sky+HD box or Freeview) very well. When I watched the most recent El Clasico match, where Lionel Messi proved once again he’s the best ever, the TV was misinterpreting slower passages of play, and wrongly applying film deinterlacing, which led to stuttering and tearing artefacts even with TruMotion switched off. The easiest cure for this is to send a progressive video signal to the OLED55B7. It’s an excuse – if you ever need one – to upgrade to Sky Q which can output 2160p.

The HDR10 presentation of the B7 is better than last year’s B6, but perfection remains elusive. Peak brightness measured 750 nits on a 10% windowed pattern in the TV’s most accurate HDR preset, representing roughly a 100-nit increase over 2016 sets. The 1000-nit figure quoted by LG only applies to very small window sizes in the overly-blue HDR Vivid mode. 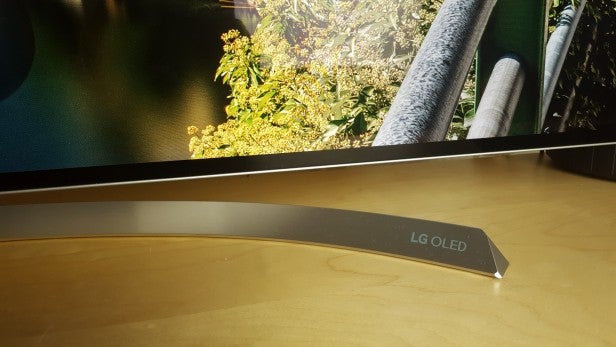 So far I’ve compared the LG OLED55B7V with its 2016 predecessor, and found it to be a good if not perfect step forward. Comparing it with the 2018 LG C8 OLED, though, exposes a few weaknesses. (Note that 2018’s B8 is designed to a price and doesn’t feature LG’s latest processing chipset.)

For instance, the new LG OLEDs from the C8 series up increase peak brightness on a 10% white HDR window to more than 800 nits. This might not sound like a big leap, but it really does make HDR look much more, well, HDR. The extra brightness in 2018’s OLED TVs boosts average brightness levels as well as peak highlights, too, and joins forces with improved processing from a new Alpha 9 chip to deliver more detail in the very brightest parts of HDR pictures.

This improved processing has other benefits too. The OLED55C8’s pictures look generally less noisy as well as more detailed, especially in foregrounds. Upscaling of HD to 4K is superior too, and colours look more vibrant and precise.

But the LG OLED55B7V holds its own where input lag is concerned, coming in at 21ms in Game mode, for both 1080p SDR and 4K HDR resolutions. PC gamers can also obtain this ultra-quick level of gaming responsiveness with full 4:4:4 chroma reproduction, with the right combination of presets/settings. This is pretty much in line with the newer C8 models.

Some people – perhaps burnt by plasmas or CRTs – are understandably worried about image retention or screenburn after prolonged gaming sessions. From my experience this is generally a non-issue on LG OLEDs, as long as you let the TV go into standby (rather than switching off from the mains) for the programmed uniformity compensation cycle to run periodically.

For such a thin display, the LG OLED55B7V pumps out very decent sound for run-of-the-mill viewing, with intelligible speech clarity and reasonable dynamic range being particular highlights. Note that the onboard Dolby Atmos decoder only works on Dolby Digital Plus and not Dolby True HD tracks found on most Ultra HD Blu-ray discs. 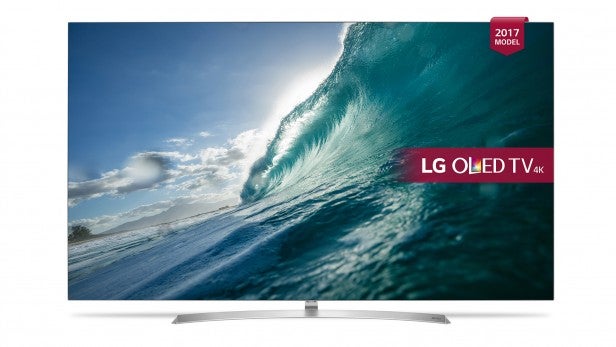 If you’re attracted by the contrast-rich, wide viewing angle allure of OLED TV technology, the LG OLED55B7V is an almost impossible bargain at its latest £1300 price.

If you can stretch your budget (far) further, you can get a pretty substantial performance leap – at least with HDR – with one of LG’s 2018 C8 and higher OLED models.

Panasonic’s FZ802 and FZ952 are even better, if you can stretch your budget even further, while the 2018 Samsung Q9FN and, to a much lesser extent, Samsung Q8DN 2018 QLED TVs offer much more competition than any previous LCD options.

At its current price, though, the B7 really is pretty much irresistible.

The LG OLED55B7V is bettered in performance terms by most of LG’s 2018 OLED models. However, the fact that you can now get a 55-inch B7 for just £1300 makes it arguably the biggest bargain of this or any other TV season.