What is the Vodafone Smart Prime 7?

If there’s anyone capable of making a phone that can punch above its weight, it’s the mobile networks. They have the ability to subsidise the cost of the device by making sure you use their network, alongside the features that go with it.

EE has done this successfully in the past with its impressive Harrier line of phones, and Vodafone dished out some good handsets last year with both the Smart Prime 6 and Smart Ultra 6.

Now Vodafone returns with the Smart Prime 7. It offers up a 5-inch 720p display, quad-core processor, removable storage and a pretty clean build of Android Marshmallow all for £75.

What’s the best phone you can buy right now?

The Vodafone Smart Prime 7 feels like a phone that costs £75. When you consider that budget phones from the likes of Honor and Motorola are starting to take design and build seriously, it’s disappointing to see the Smart Prime 7 is dull and unambitious.

It’s a plastic slab of a phone, with a clean front and a flimsy removable back. That back has a slight woven pattern that feels like it should be textured, but it’s not. It lacks grip and bends easily when removed. 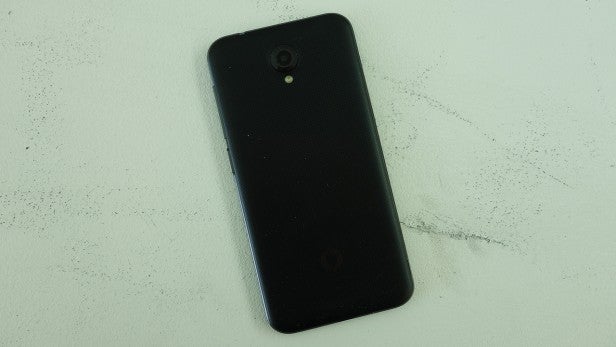 On the sides there’s a volume and power switch, both of which continue that flimsy feeling. They have a slight texture, so they can be easily felt in your pocket, but they lack a satisfying click.

The sides themselves are plastic, even though from a distance they do resemble metal. I thought we’d got past that stage of phone design where we tried to make plastic look like metal, but it seems not.

It’s not all bad, though – at 7.9mm it’s a thin phone and one that easily fits into a pocket. It’s light too, and while there’s a rather large bezel surrounding the 5-inch display it still feels compact. It’s about the same size as the Moto G3, and slightly larger than the iPhone 6S, but I can use it in one hand without too much trouble. 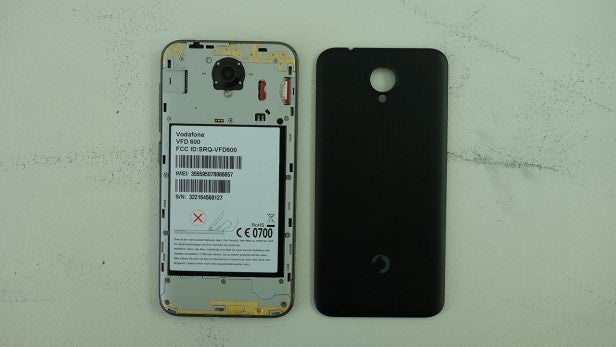 Below the display is a set of three capacitive keys, each of which light up momentarily when you touch them.

At 5-inches, the Vodafone Smart Prime 7’s display is on the small side for a modern Android phone, and for the price it’s quite impressive.

It’s a 720p LCD panel and I would say that 5 inches is just about the limit with a display of this resolution. Pixels are visible if you get in close, colours are a tad muted and it just feels a bit washed out.

Viewing angles, though, are surprisingly good. Tilting the phone to either side doesn’t completely ruin the image and it doesn’t have a pinkish tinge, something I found a little off-putting on the HTC 10. 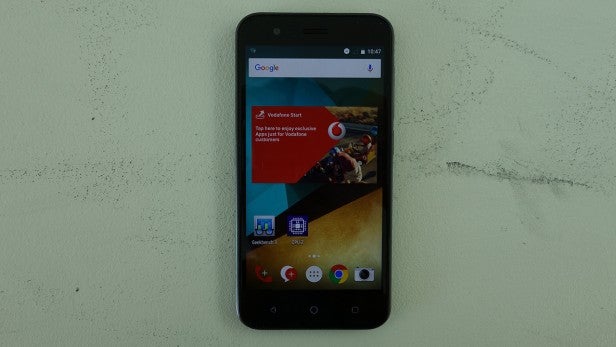 Brightness isn’t an issue either, I normally have it on about 50-60% and it’s perfectly readable in the majority of conditions.

My main issues with the screen comes with its responsiveness, or lack thereof. There have been multiple occasions when the screen hasn’t done anything when I’ve touched it, and I’ve had to try multiple times for it to respond. I also feel it requires a much more specific touch – when trying to hit a link for example – and on numerous occasions I’ve tapped on the wrong thing by accident.

With budget phones, the main creator of problems is the performance. To keep the price down, lower-specced processors are used and that tends to cause issues. The Vodafone Smart Prime 7 sort of falls into this pit too, but it’s still a perfectly usable phone.

Inside you’ve got a low-end quad-core Snapdragon 210 CPU paired with 1GB of RAM, whih for 2016 that isn’t all that much. Especially when devices such as the Moto G4 are offering 2GB of RAM, a 1080p display and a very capable Snapdragon 617 CPU. I know it costs more (£169), but it’s well worth the extra cash.

Those low-end specs create a slow and plodding user experience. Apps judder slightly before they open, swiping through web pages is blocky and once you’ve got a few apps open things quickly get even worse. It’s far from unusable, though. It’s fine for sending a few emails, messages and phone calls, but don’t expect to be gaming or running intensive apps. 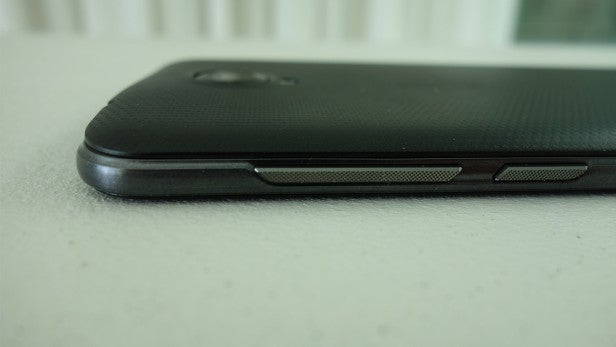 It’s perfectly acceptable for the price, but it doesn’t push beyond it. It’s predictable, rather than trying to do something extra.

Benchmarking seems completely redundant on a device that costs £75, but if you want the scores on the doors, here you go. In Geekbench 3 it scores 331 on the single-core test and 1,070 on the multi-core version. That’s a little better than the other Snapdragon 210 device I’ve tested before, and that phone (the HTC Desire 530) is much more expensive.

There’s 8GB internal storage, but it seems that only 4GB of that is actually usable. Vodafone tells me the user should have 5GB, but it only shows me 3.99GB. Not sure what the issue is here, but it’s still a pitiful amount of storage. You’ll need an SD card here, no doubt.

Another thing to note is that the Vodafone Smart Prime 7 is, you guessed it, locked to Vodafone. A Three user? Or O2? Don’t even think about it. Call quality and 4G signal was great, with calls coming across crisp and clear.