2015 wasn’t a great year for HTC phones. While the company’s flagship HTC One A9 smartphone looked great, it was overpriced and offered middle-of-the-road hardware. Then the company disappointed everyone by not unveiling the HTC One M10 at MWC.

So you could be forgiven for missing the arrival of the Desire 530. It’s a phone that, on paper at least, has the potential to be one of 2016 best affordable smartphones – although its UK price hasn’t yet been confirmed.

Its standout design feature is its ‘Micro Splash’ finish, which is created using nozzles that spray paint at various pressures and different thicknesses at the back of the phone. As a result, HTC claims each Desire 530 is unique.

Video: TrustedReviews explains how to pick your next smartphone

As budget phones go, the Desire 530 genuinely feels like it’s been designed with care. The phone looks like a stripped-down version of HTC’s selfie specialist, the Desire Eye, which is no bad thing.

During my initial hands-on with the Desire 530 at the MWC show, I was a big fan of the Micro Splash finish, as it made the white model I tested look like a Jackson Pollock painting. Curiously, the model HTC sent me for review was the one edition that doesn’t get the Micro Splash treatment, instead being a fairly dull grey. It still feels good to hold, but it doesn’t have that visual ‘wow’ factor that the splashed models create.

The inclusion of a lanyard slot is another unique design feature. For those who missed the boat, lanyards were a fashion accessory that could be seen on many ’90s school kids’ Nokia 3230s. They’re basically bits of shoelace that let you connect the phone to your wrist – making it harder to lose.

HTC claims the lanyards will prove a hit with younger buyers looking to accessorise their phone, and while this might be a stretched claim, I can see the feature being useful for people who use their phone to capture photos in crowds at festivals or sports events, where the chance of an accidental drop is high.

HTC is also offering a range of ‘snap cases’ for people who want to further customise their phone. The snap cases have the same Micro Splash finish as the Desire 530, but offer a more varied number of colour options. If you’re unfortunate enough to end up with the plain grey version, this could be a great substitution. 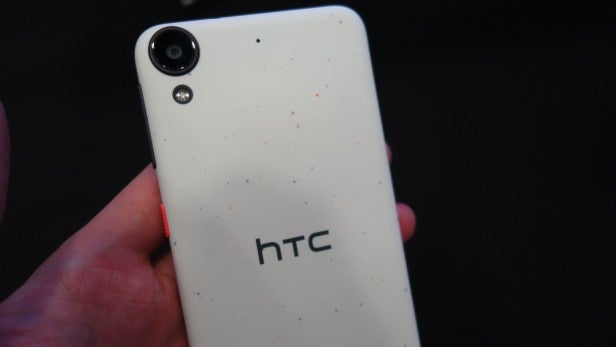 Interesting design features aside, the Desire 530 is fairly well built – by budget handset standards, at least. The plastic undeniably looks a little drab without its speckled finish, but it’s more than solid enough to survive the odd accidental drop. The grey unit I tested came out of an encounter with my flat’s stairwell without so much as a scratch.

With a 5-inch screen, it also hits the same size sweet spot as the Nexus 5X, which makes it one of the few small-hand-friendly smartphones on the market. Overall, it’s a lovely device to hold, if not to use.

The phone comes equipped with a microSD and Nano SIM slot. The inclusion of a microSD slot is a key positive, as it’ll let you add up to 200GB of extra space to the Desire 530’s 16GB of built-in storage.

Thanks to the inclusion of Android Marshmallow’s Adoptable Storage feature, if you’re using an SD card that’s fast enough, you’ll be able to seamlessly expand your storage. The phone automatically assigns where apps and files are stored without any management required on your part.

The Desire 530’s 5.0-inch Super LCD screen is a little less impressive, but reasonable for the money. The specs match the Desire 530’s arch-rival, the Moto G, which is the same size and has an identical 1,280×720-pixel resolution.

The Desire 530’s screen is more than sharp enough for regular use. Colours are a little drab for my liking, but there’s also a useful temperature control in the phone’s settings that lets you tweak the screen to meet your preference.

The temperature control is a nice touch, but I found a few serious issues that hamper the screen’s overall appeal. 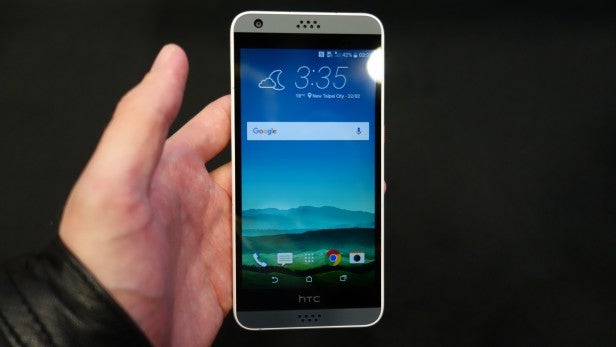 For starters, viewing angles aren’t great. Viewed from even slightly off-centre, whites quickly distort and take on various hues including blue, grey and yellow, depending on the angle you view them from.

The phone’s maximum brightness is lower than I’d like. Even maxed out the phone looks dull and becomes unusable when hit with even moderately bright light. During my time with the Desire 530, even on grey overcast days in London the phone’s screen regularly became unreadable outdoors.

Being fair to HTC these are issues I experience on most affordable smartphones and even 12 months ago I’d have found them forgivable. But with the arrival of handsets such as the Moto G, EE Harrier and Honor 5X, this is no longer the case.

By today’s standards the Desire 530’s screen isn’t good enough, even at the budget end of the market.