What is the EE Harrier?

The EE Harrier is a formidable entry in EE’s second round of branded handsets, landing as a budget 5.2-inch Android smartphone.

Most know EE as the market leader for the UK’s 4G cellular networks, but don’t let that put you off the company’s mobile phone efforts. Manufactured by BenQ, the Harrier is a well-built and versatile handset. It’s aimed at those looking for an impressive device but aren’t willing or able to tread into flagship territory.

For your money, you get a 5.2-inch smartphone with a 1080p display and Qualcomm’s new Snapdragon 615 mobile chip clocked at 1.5GHz. The Harrier runs on Google’s latest Android 5.0 Lollipop OS, and there’s a 2,500mAh battery inside that we found seriously impressive.

We think the EE Harrier shows off impressive design, reliability, and solid performance, but is it worth the price tag? Read on to find out.

The first thing you notice about the EE Harrier is that it looks half-decent for a cheap smartphone. Too often, sub-£200 devices look like they’d be better suited as a Happy Meal gift, but EE makes very sensible design choices.

The handset is built almost entirely from smooth plastic, which is fairly typical for cheap devices, as it minimises production costs. The plastic chassis keeps the Harrier’s weight down too. The phone weighs an airy 145g, which is exactly the same as a Samsung Galaxy S5.

It’s not bulky either, with a thickness of 8.9mm. That puts it below the 11mm profile of Motorola’s rival budget smartphone, the 2nd gen Moto G. It’s also thinner than the equally value-focused Karbonn Sparkle V, which is 9.2mm thick. The device is big – we’re talking a 5.2-inch screen – but most users will be able to touch the top of the display with their thumb with ease. 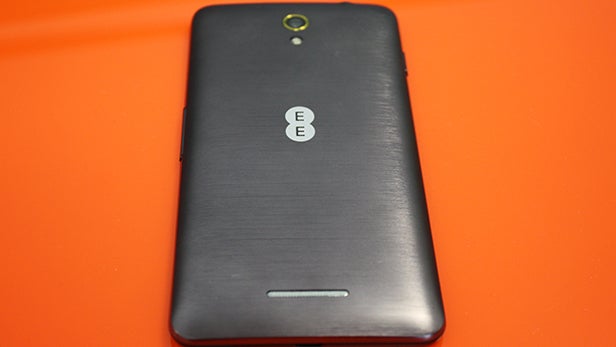 EE went for a faux brushed aluminium finish on the rear casing – think LG G3 or Asus ZenBook UX305 – which drastically improves the appearance of the Harrier. The sides of the bezel are slim, while the thicker top and bottom portions are perfectly sized for holding the device in landscape. The trim bezel makes the screen look large and impressive, too.

Opting for aluminium grilles for the front and back speakers was also a good design choice. On the rear side is a glossy, mirrored EE logo that thankfully looks more premium than tacky. The camera lens is encircled by a yellow-gold ring, which adds character to the device. That’s important in the low-end smartphone market, where smartphone design is often too prosaic.

Button and port placement is mostly standard on the Harrier. A Micro USB port is centered on the bottom of the device, while a headphone jack is positioned on the top. The volume rocker is on the right side, while the power button is on the left – that will take some getting used to for those more familiar with right-hand-side on/off buttons.

Lest we forget, the back of the phone is removable. Power users wanting to carry a spare battery, rejoice! Or so we thought, until we realised that it’s impossible to get the battery out. In fact, the only use for the removable casing is to access the SIM tray and microSD slot. Boo, hiss! 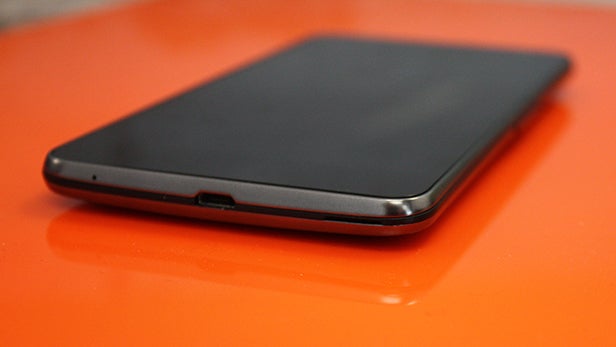 The screen on the EE Harrier is great. It’s a Full HD display, which trumps the lower-resolution 720p panel on the Harrier Mini. A 1080p display is a great addition to a budget handset. The resultant sharpness and clarity adds heaps of value to the Harrier, and means buyers can watch hi-def content – on Netflix, for instance – natively.

The Harrier’s panel reproduces colours accurately and vividly. This is important, because some handsets are guilty of having aggressive screen settings, leaving on-screen content looking oversaturated. That can be a pain when you share photos and they look different on everyone else’s devices or on your computer screen.

The Harrier, however, seems to get hues spot on. Perhaps the only issue is that we wish the phone’s brightness could be cranked up a bit more, as very bright, direct sunlight can make the screen tough to view.