Business-ready Ultrabooks aren’t exactly plentiful even now the standard has matured. In fact, as far as we’re aware only the Dell XPS 13, HP Folio 13 and of course Lenovo’s ThinkPad Ultrabooks even offer TPM.

However, when we looked at the Toshiba Satellite Z830, which is the virtually identical consumer version of the Portege Z830, we weren’t completely convinced – due mainly to the poor screen and average keyboard. 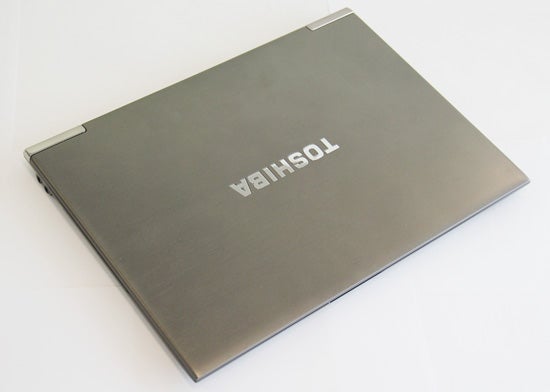 The new Z930 is Toshiba’s successor, and at a mere 1.09kg according to our scales, takes the title of lightest 13-inch laptop from the 1.15kg Samsung Series 9 900X3B. Despite that, it still packs goodies like generous connectivity; a backlit keyboard; up to a Core i7, 8GB of RAM and 512GB SSD; optional 3G; fingerprint scanner; and Windows 7 Professional – making it one of the most powerful, versatile Ultrabooks on the market.

Incidentally, it’s worth noting that the business-oriented Portege Z930 and the consumer Satellite Z930 are virtually identical, with only a few small touches such as the fingerprint scanner and TPM distinguishing them. As such, this can be taken as a Toshiba Satellite Z930 review too.

Design
The more things change, the more they stay the same. Despite having lost some weight and gained some new innards, the Toshiba Portege Z930 looks like the Toshiba Satellite Z830’s identical twin – and that’s not a particularly good thing. While we wouldn’t go so far as to call the Z930 ugly, along with its predecessor it’s certainly one of the less attractive Ultrabooks we’ve seen. It could really have done with an injection of the Toshiba Satellite U840W’s more consumer-oriented styling. 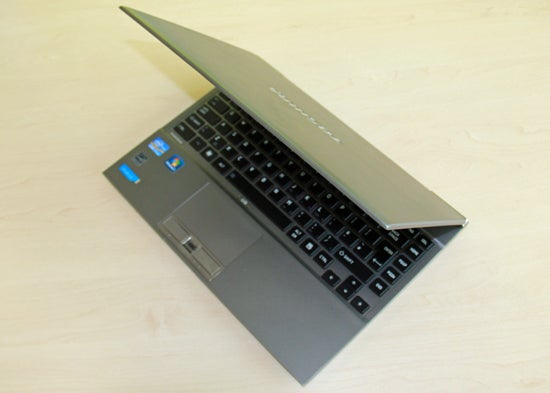 Still, all thoughts of how it looks tend to go out the window once you’ve held this laptop; it really is that light. Toshiba’s achievement here is incredibly impressive, but there’s also a downside. As before, to keep weight down the Portege Z930’s entire chassis is constructed using magnesium alloy, which leaves it feeling deceptively flimsy in the hand. In fact, people often confuse magnesium panels for cheap plastic.

Connectivity
Like its looks, connectivity on the Toshiba Portege Z930 is identical to the Z830, which again is both good and bad. It’s good because this means it’s superior to that of most Ultrabooks, thanks to a rare Gigabit Ethernet port, plus full-size HDMI and VGA, the latter still having potential on a business machine.

It’s bad because most of these ports are located around the rear. The left houses headphone and microphone inputs along with the SDXC card slot, the right gives you a single USB 3.0 port, with twin USB 2.0 ports, the aforementioned video connections and Ethernet taking the rear. This means you will need to be careful when lifting the laptop while a memory stick is plugged in the back, but at least – unlike the Acer Aspire Timeline U M3 581TG – this Ultrabook offers at least one side USB port.

Usability
Toshiba seems to make a habit of average keyboards on its ultraportables. Yet again the Portege Z930’s backlit chiclet affair found here is identical to that of its predecessor, meaning feedback is shallow and lacking positive confirmation. Though it’s certainly usable, it joins the Z830 as being one of our least favourite Ultrabooks for typing, which is a real pity.

The small touchpad is different to the Ultrabook norm, not only because of its size but because it sports physical buttons. However, the pad is responsive while its buttons are nice and crisp. A fingerprint scanner for those who hate remembering passwords is nestled between them, which might make you miss the occasional right-click but is still a welcome feature.

Screen
Unfortunately, the screen on the Z930 is also still the same 1,366 x 768 TN affair as on the Toshiba Satellite Z830. While we love its matt finish and even backlighting, viewing angles are severely compromised by contrast shift and it’s not overly bright. 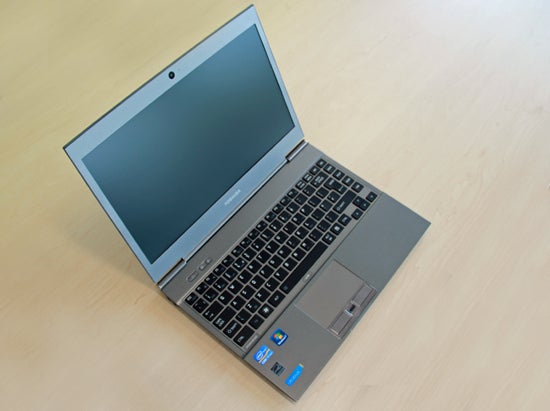 For business use it’s just fine, but trying to share a movie might be problematic. If you’re after a super-light Ultrabook with a quality screen, the Samsung Series 9 900X3B is still the one to go for.

Speakers
Toshiba has a tradition of providing its laptops with some of the best speakers going but, like its predecessor, the Z930 doesn’t hold up here. Though they do go louder than those of most Ultrabooks and sport Dolby Advanced Audio processing, these examples lack bass and distort even at medium volumes.

Performance
We’re seeing ever more Ultrabooks that come in various configurations, but Toshiba’s Portege and Satellite models are still some of the most flexible. Our Portege Z930-108 came with a Core i7 backed by 8GB of RAM and a 128GB SSD.

The Intel i7-3667U is a dual-core CPU that runs at 2GHz by default but can clock up to 3.2GHz. It will happily tear through any workload you would care to throw at it, and is generally as much power as you can expect to see on a slim 13-inch ultraportable like the Toshiba Portege Z930. Power users will also appreciate a whopping (for an Ultrabook) 8GB of RAM. 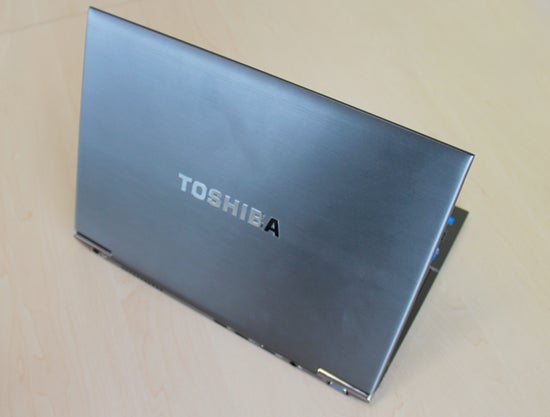 Where gaming is concerned, Intel’s integrated HD4000 graphics as found in its Ivy Bridge generation actually let you play undemanding titles in the laptop’s native resolution at reasonable frame rates, though feeding it a remotely demanding game like Crysis will still result in a slideshow. This is the only area where performance is significantly better than the Satellite/Portege Z830

It’s no surprise to see battery life yet again follow in the footsteps of the Z930’s predecessor, giving us just three minutes more in the same test. This puts Toshiba’s Portege Z930 at a grand total of seven hours and 23 minutes, which is impressive by Ultrabook standards – though the new HP Sleekbook based on AMD’s low voltage platform beats it with a full hour more. 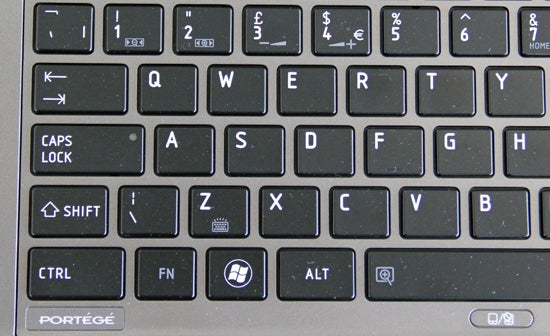 Value
Our specific Toshiba Portege Z930-108 will set you back a rather stiff £1,400, which seems hideously overpriced until you take into account its integrated 3G. However, you can get the ‘regular’ Core i5/4GB version sans 3G for under £980.

Unless 3G is essential or you need that zippier CPU and extra memory, we would consider a different business Ultrabook, maybe from Lenovo, HP or Dell. They might not be as light or last quite as long, but a model like the TPM-equipped previous-gen Folio 13 can be had for a mere £650… 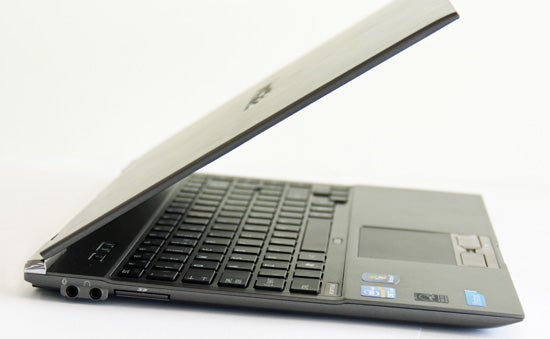 Meanwhile if you’re a consumer, the latest Samsung Series 9 NP900X4 (essentially the Samsung Series 9 900X3B updated with Ivy Bridge and better specs) can be had for £1,080 with a Core i5, 8GB of RAM, and a far superior screen. It’s also a far prettier and more sturdy machine with better usability and connectivity placement.

The Toshiba Portege Z930 might be the lightest 13in laptop in the world – which is undeniably impressive – but it’s not the prettiest or the best. Admittedly there’s not an awful lot of choice when it comes to business-capable Ultrabooks, especially ones also equipped with 3G. But too much about this model has stayed the same as its predecessor, including somewhat awkward connectivity, a mediocre typing experience, and its average screen… Ultrabooks have moved on.

Meanwhile for consumers, there would appear to be little reason to pick the virtually identical Toshiba Satellite Z930 unless the price is significantly lower than, for example, the latest Samsung Series 9.