The 14-inch Toshiba Satellite U840W is not just your average Ultrabook. Instead, it’s as if Toshiba took a regular ultraportable laptop and stretched it widthwise. If you’ve seen Philips’ 50PFL7956H 21:9 TV, you’ll know exactly what to expect, as the U840W is actually the world’s first 21:9 widescreen laptop. 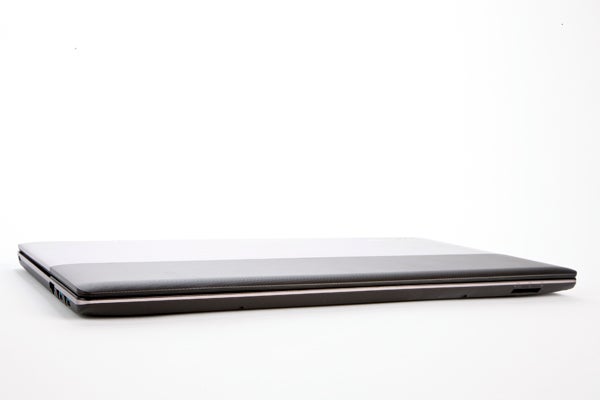 What’s wrong with the good old ‘regular’ 16:9 variety, you may ask? Well, though most TV content is formatted in this aspect ratio, the majority of movies are not. Cinemas offer an ‘ultra-wide’ (usually 2.35 or 2.40:1) screen, and with the U840W, so does your laptop. With a resolution of 1,792 x 768, it’s also ideal to work with two documents side by side.

Mind you, it’s not just the Satellite U840W’s screen that potentially impresses, as it’s also beautifully built, offers good connectivity and performance, plus excellent battery life – and at under £900, it doesn’t break the bank. So is it worth your hard-earned cash? 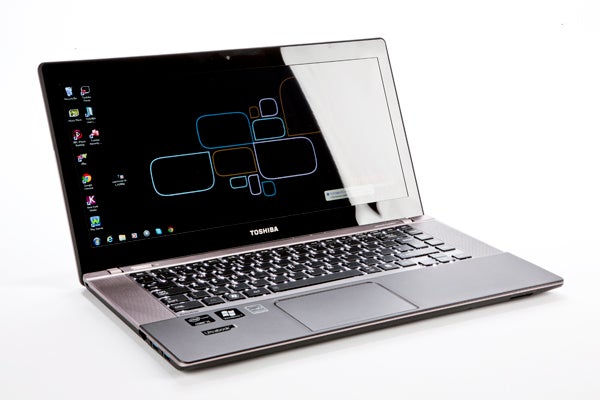 Toshiba Satellite U840W Design and Build
There’s no denying that the Satellite U840W is Toshiba’s prettiest Ultrabook yet by quite a stretch. Half the lid is brushed mocha aluminium, while the other half sports a black, textured, rubberised finish. The same combination applies to the keyboard surround, while the U840W’s entire base is finished in that black rubber. On many laptops a two-tone design doesn’t work, but for some reason here it simply does.

All this makes the U840W, quite frankly, the best-feeling Ultrabook we’ve yet come across. It’s simply lovely to hold, and all that soft-touch plastic provides a secure grip, too. Every inch of this Satellite feels premium, smooth and pleasant to the finger, and most of it doesn’t scratch or pick up fingerprints easily. Only the glossy black screen surround breaks this trend. 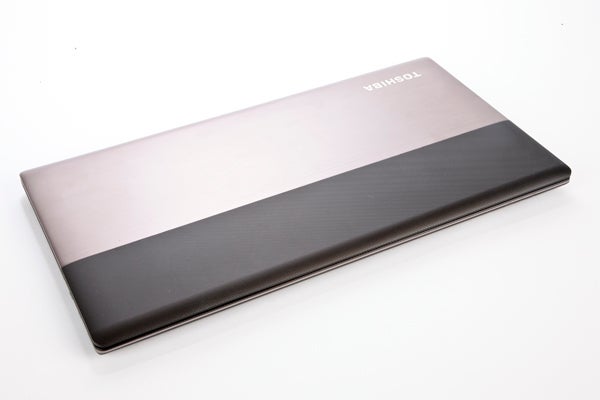 Build quality mostly matches up. Though it’s not quite on a level with the likes of the MacBook Air or Samsung Series 9 due especially to some flex in the keyboard area, overall this is one well-designed ultraportable. Reasonably durable, ergonomic and pretty, with the Satellite U840W you’re getting the best of most worlds.

Toshiba Satellite U840W Connectivity
Connectivity is pretty good too on the Toshiba Satellite U840W, though you don’t get any extras. On the left you’ll find a flip-out Gigabit Ethernet port and two speedy USB 3.0 ports. The front houses an SDXC card slot, while the right is home to headphone and microphone jacks, a third USB 3.0 connection and HDMI for video output. 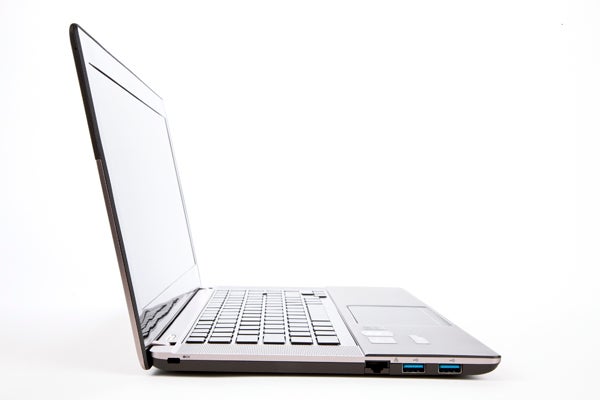 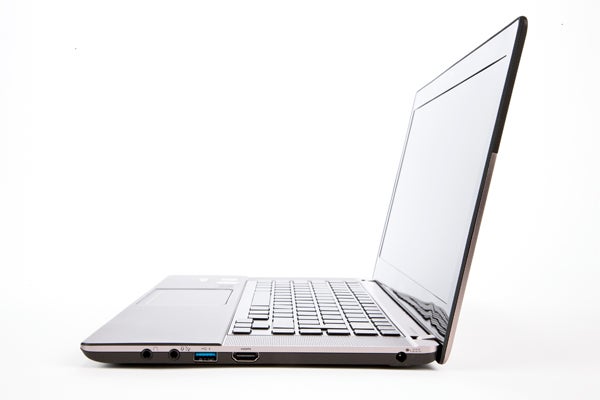 Toshiba Satellite U840W Usability
Unfortunately, keyboards have always been a weak point of Toshiba Ultrabooks, even as recently as the Toshiba Portege Z930. The good news is that the U840W improves noticeably on its predecessors. 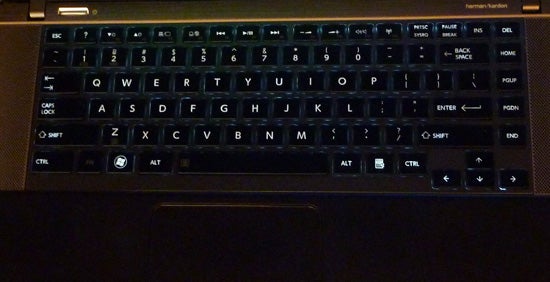 While the aforementioned flex can be annoying and feedback is still far from as positive as we would like, the well-laid-out keyboard on this widescreen Satellite is very usable thanks to better travel and slightly more defined action. We can only hope that Toshiba continues to improve here till it can rejoin the ranks of HP, Samsung and portable keyboard king Lenovo. 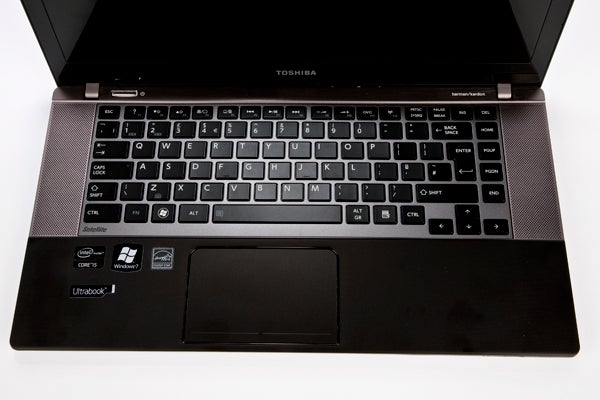 We have no complaints of the huge multi-touch trackpad, which is smooth, responsive and sports a subtle but nice click.

Toshiba Satellite U840W ‘Cinema’ screen
Naturally, its ‘cinema’ screen is the main talking point of the Toshiba Satellite U840W Ultrabook. As mentioned in the intro, it’s a 14.4-inch, 21:9 aspect ratio affair sporting a spiffing resolution of 1,792 x 768 – the same number of pixels as your average 13-inch laptop vertically, but significantly more than the usual 1,366 ones horizontally.

This is genuinely useful for working with multiple windows, and it must be said that you generally don’t realise how annoying the black bars on most movies are until they’re no longer there. In other words, the ‘cinema’ line isn’t without merit; this aspect ratio genuinely enhances your viewing experience. 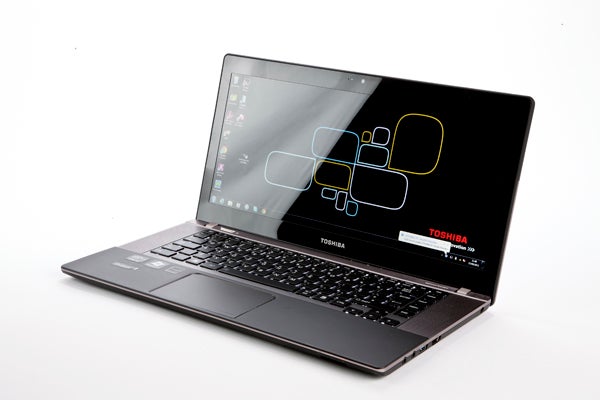 We’re glad to say that, in most regards, image quality from the U840W’s ‘ultra wide (TM)’ screen is also rather good. There’s very little bleed or unevenness in the display’s backlighting, colours are punchy (thanks in part to a glossy finish which also causes distracting reflections), and while blacks are not the deepest, dark detailing is excellent so you won’t miss much in gloomy movies. Meanwhile the higher-than-average pixel count leaves it nice and sharp. 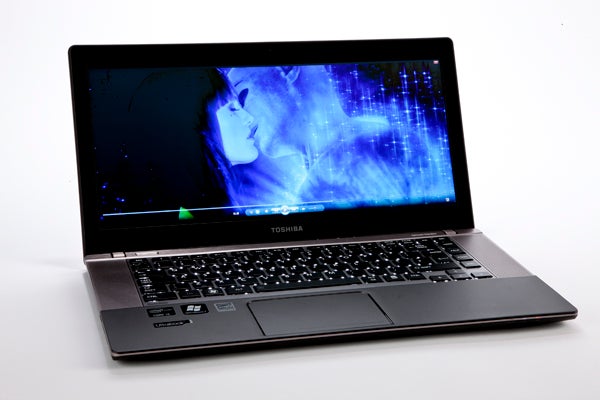 Taking all the above and its wide aspect ratio into account, the Toshiba Satellite U840W provides a fantastic movie experience – if you’re viewing it from the right angle. That’s right folks, the panel used is of the TN variety. Unlike higher-quality IPS or VA type displays, that means viewing angles are quite poor and you need to carefully judge your viewing position – though if you tilt the screen right you can easily watch with two people. 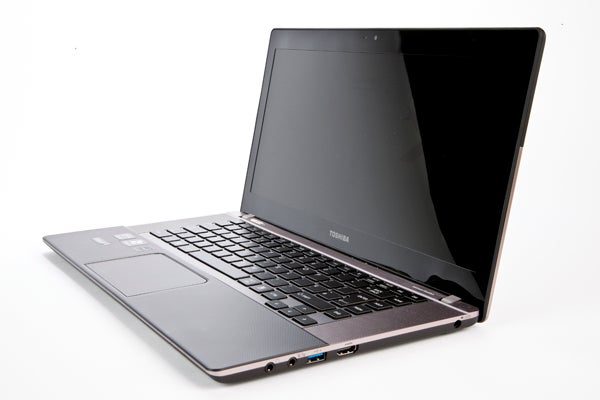 While we appreciate that there isn’t a huge amount of choice in laptop-sized ‘Cinema’ 21:9 widescreen panels, it’s a real shame that the first laptop of its kind is marred by this kind of niggle. Still, keep in mind that most Ultrabooks use similarly flawed TN panels, with only a few exceptions like the Samsung Series 9 900.

Where productivity is concerned, Toshiba has included a handy little piece of software that pops up an extra ‘button’ on any window, right next to the Minimise, Maximise and Close ones. This button automatically resizes the window to what Toshiba calls a “wide split”, meaning one window takes up two thirds of the screen and the other one third. However, right-clicking on this button lets you ‘switch’ sides or choose a “square split” instead. This really is a nice touch by Toshiba and makes the most of the U840W’s ‘Cinema’ screen outside of entertainment for multitasking.

Toshiba Satellite U840W Speakers
Toshiba laptops – at least the ones that use Harman/kardon speakers – have always been very impressive in the audio department, and the U840W is no exception. In fact, we’re giving it the crown of best-sounding Ultrabook.

Its up-facing speakers to either side of the keyboard (a clever use of the extra width) give you more bass, volume and depth than any slim ultraportable, and combine this with well-defined trebles, all without any sign of distortion. Basically, they’re good enough that movies and games are aurally enjoyable, and put many larger laptops to shame.

Toshiba Satellite U840W Specs
As far as its innards go, the U840W is your typical high-end Ultrabook, with performance that will be more than adequate for most, as long as you’re not a gamer.

At the helm is an Intel third-gen (Ivy Bridge) Core i5-3317U. This dual-core processor supports Hyper-Threading for up to four virtual cores and can clock up to 2.6GHz from its 1.7GHz default. 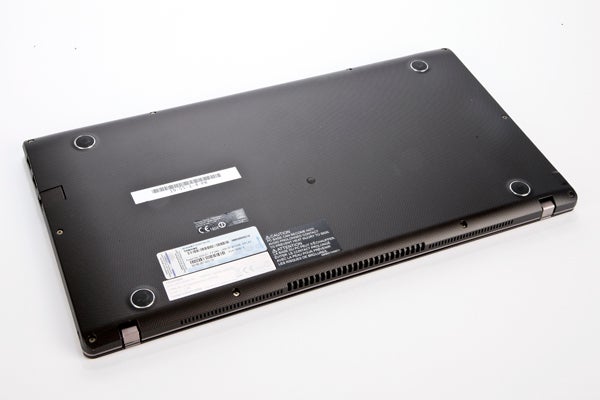 It’s backed by 6GB of RAM, which is significantly more than the usual 4GB you’ll find on nearly all Ultrabooks by default. Given the Satellite U840W’s multi-tasking aspirations, this seems a logical increase.

For storage there’s a hybrid HDD/SSD affair, with 500GB of traditional hard drive combined with a 32GB solid state part for fast booting and quick loading on your most frequently used software.

Only graphics are a bit on the weak side. Though Intel’s latest integrated HD 4000 generation is a major improvement over the previous HD 3000 chip, it’s still not really what you would call gaming-worthy, and if you want to play recent 3D games you’ll need to be prepared for serious compromises in detail and resolution. Certainly, running even less demanding titles at the screen’s native res is a no-go. 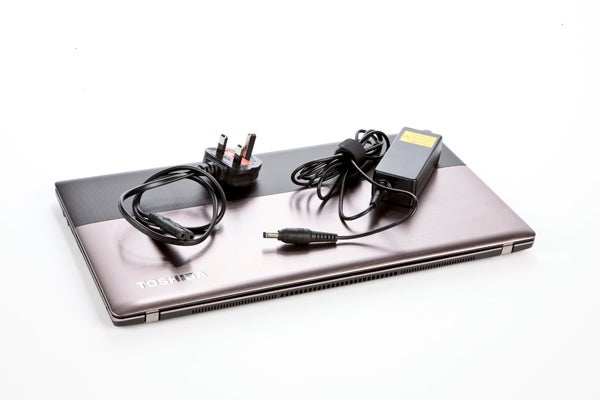 Toshiba Satellite U840W Battery Life
Toshiba has certainly made good use of the extra space the U840W’s chassis provides over the average Ultrabook for some extra battery capacity, as this Satellite lasted a record-setting seven hours 40 minutes on a charge – that’s the best result we’ve yet seen from a slim Ultrabook, only topped by the AMD-based HP Envy 6-1006ea ‘Sleekbook’. Even the far thicker and heavier 14-inch HP Envy Spectre fell far short of this mark.

Don’t forget, whether you like or dislike the ‘Cinema’ screen it’s pretty good and provides a higher-than-average resolution, while the rest of the U840W is a nicely built slab of metal and soft-touch rubber with premium features like keyboard backlighting. 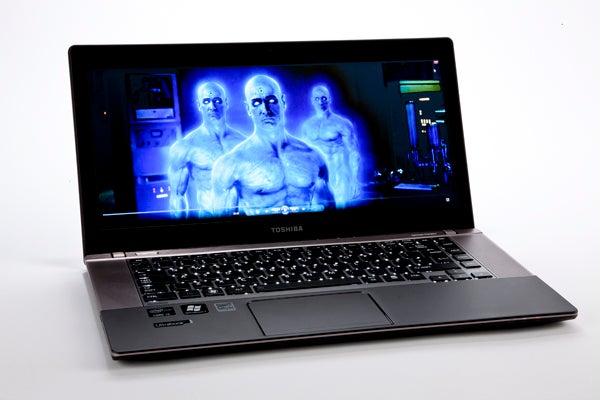 At a sub-£650 price, the U840W’s competition is either the plasticky Lenovo IdeaPad U310, which is inferior in every way except for its keyboard, or the Sony VAIO T13 – though that’s heavier, thicker, has no keyboard backlighting, and of course lower screen res. There’s also the Acer Aspire S3, but that doesn’t offer USB 3.0 and has average battery life.

Toshiba has taken a brave step in being the first to introduce a ‘cinematic’, ultra widescreen laptop into the market. The Satellite U840W is an all-round goody bag combining generally premium build and materials with a usable backlit keyboard and the best speakers we’ve yet heard on an Ultrabook along with good battery life. Its 14.4in 21:9 display is also reasonably impressive and great for split-screen multi-tasking, though being TN rather than IPS/VA it still suffers from poor viewing angles and its glossy finish can be annoying. However, throw in the U840W’s current £600 price, and there’s little that can touch this Ultrabook.