Intel’s Ultrabook movement is on a roll. All the major laptop manufacturers either already have contenders in the field or are training them up, ensuring they take slimming pills to keep them below 22mm thick and weighing less than 1.5kg. The important part is that this is achieved without compromising internals, which at a minimum include an Intel Core i CPU, 4GB of RAM and SSD (or hybrid SSD) storage for snappy performance and fast boot-up.

We’ve already extensively tested the Asus Zenbook UX31 and Acer Aspire S3, as well as checking out awesome future models like the Lenovo Yoga. However, back to the here and now, Toshiba’s current offering is the Satellite Z830-10U, and it’s one of the lightest, thinnest and best-connected Ultrabooks going.

The Satellite Z830’s name recalls the Satellite R830, which was as close to an Ultrabook as many laptops got before the standard was introduced. In fact, if it hadn’t been for its poor screen and keyboard, the R830 would have been one of our top laptops of last year, so this latest Satellite is starting off with some impressive DNA. Just don’t confuse it with Toshiba’s Portege Z830, which is the business version of the company’s Ultrabook range and costs more.

So let’s start off with design. As mentioned the Z830 is one of the thinnest and lightest Ultrabooks on the market, which is quite an achievement in a sector where thin & light are already the norm. It measures only 16mm at its thickest point, beating the S3’s 17.5mm and the 17mm of the UX31 and MacBook Air [while not technically an Ultrabook, Apple’s ultraportable fits the category]. 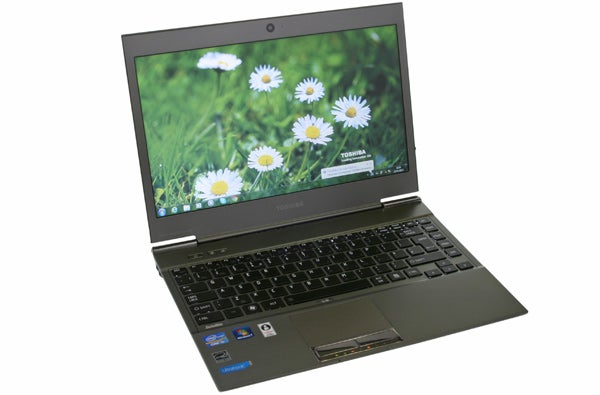 Weight – or rather, lack thereof – is where this Satellite really shines though. Thanks to a chassis constructed entirely from magnesium alloy, Toshiba has kept it below 1.11kg, where most rivals weigh closer to 1.5kg (for example the S3, which uses magnesium-alloy for its interior, still comes in at 1.4kg). And while this might only be a few hundred grams difference, it’s really noticeable when you pick the Z830 up. It almost lives up to Toshiba’s “featherweight” marketing.

So far then, Toshiba’s Ultrabook is shaping up pretty well. Unfortunately, thanks to all that magnesium it feels deceptively flimsy in the hand, and even though this is a somewhat false impression, the amount of flex will undoubtedly put off many who might be looking for the kind of solid rigidity you get from the Air or Zenbook. 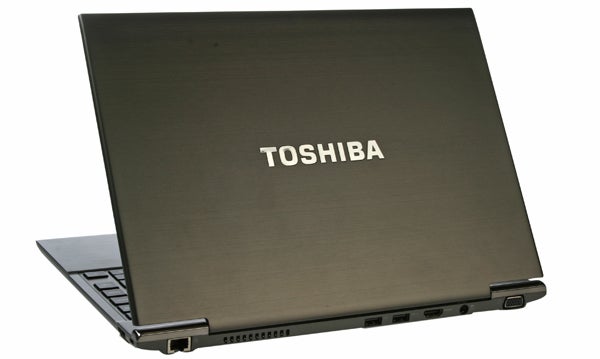 Also, the Satellite Z830 isn’t exactly the prettiest Ultrabook we’ve seen, perhaps because of its shared DNA with the business-oriented Portege. Even its lid isn’t a cohesive whole, with two hinges to either side finished in chrome – as is the touchpad area. These touches jar rather than adding class. And while we’re talking about the pad’s visual impact, the multicoloured indicator LEDs don’t do it any favours either.

The Z830’s extensive connectivity also spoils the tapering edges somewhat, even if Toshiba has located most of it on the laptop’s rear. Finally the bevy of colourful stickers on the palm rest don’t help matters much (though they’re fairly easy to remove). Admittedly these labels are obligatory, but Asus’ solution of making them all grey, for example, showed a consideration for style that’s missing here.

As already mentioned, the Satellite Z830’s connectivity is among the most extensive to be found on any ultraportable. Again, this is because it’s the identical twin of the Portege Z830, with the unwelcome anachronism of a VGA port proof of this heritage. Still, we won’t complain about a rare (without requiring a USB adapter) Gigabit Ethernet port, a full-size HDMI port, or the separate headphone and microphone inputs on the laptop’s left side where they join a full-size SDXC card slot.

Finally there are three USB ports: two USB 2.0 at the back, and one USB 3.0 conveniently located at the laptop’s right side. Much as we would have preferred all the connections on the sides rather than having most of it around the back, the inconvenience is a concession to style. However you will need to be careful when lifting the laptop while a memory stick is plugged in the back.

As is the norm for Ultrabooks, the Z830 features a chiclet/isolation keyboard. The Z830 joins the MacBook Air and Samsung Series 9 (both old and new) in offering a backlit keyboard, a feature both the Asus Zenbook UX31 and Acer Aspire S3 lack. Keys are well laid out and spaced, though they could have done with being just a tiny bit larger. The secondary function key layout will also take some getting used to since it’s different from most laptops.

Unfortunately, as with the Satellite R830 before it, Toshiba’s latest ultraportable doesn’t impress when it comes to typing. We can live with the keys’ somewhat shallow travel, but they also lack the defined click that most rivals do manage to various extents. While it’s still usable, the Z830 is probably our least favourite 13in Ultrabook so far for word processing duties.

The touchpad is yet another aspect that’s different from the Ultrabook norm. Rather than the buttonless glass pads we’re used to seeing, here we have a traditional buttoned affair. This leaves less room for the pad itself, and it’s a tad smaller than even the S3’s. Thankfully, it’s responsive and pleasant to the touch, while its buttons are nice and crisp. Our only criticism is that their chrome-effect finish is partial to fingerprints. 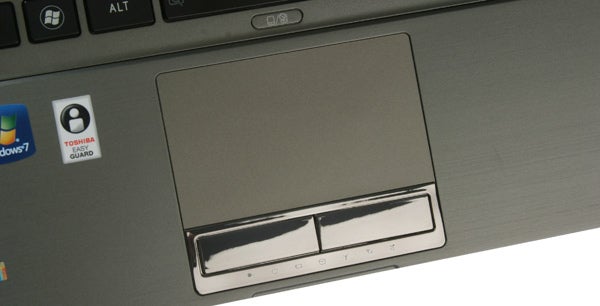 Getting to the display, we can’t emphasise enough how much we want IPS panels to become standard on a high-end category like the Ultrabook. After all, when everything else is premium, it’s disappointing to keep finding the same sub-standard screen – yet most manufacturers continue to use cheap and cheerful TN panels with the rubbish viewing angles and poor colour accuracy these entail. So far, only LG and Lenovo (with its Yoga) have shown a commitment to higher quality Ultrabook displays.

As you might have guessed already from this mini rant, we’re not wowed by the Satellite Z830’s 13.3in, 1,366 x 768 screen, despite the love we have for its matt finish. Contrast is decent, with only the subtlest dark shades on our greyscale remaining indistinguishable. Colours, though somewhat muted, are reasonable, and there is little sign of backlight bleed or excessive unevenness. However, poor viewing angles spoil these good points, with strong contrast and colour shift both vertically and horizontally. 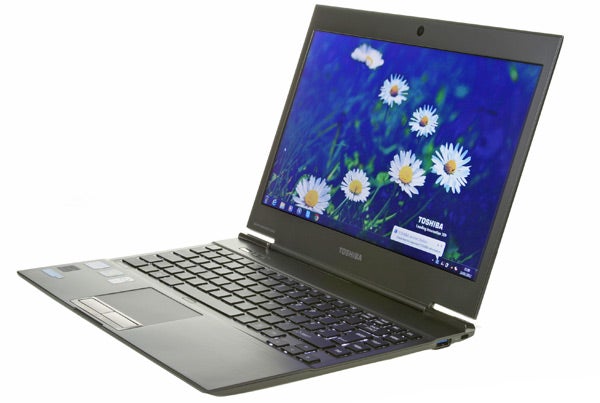 Toshiba has a proud tradition of providing its laptops with some of the best speakers going but the Z830 (almost inevitably, given its slimness) bucks this trend. Though they do go louder than those of most Ultrabooks and sport Dolby Advanced Audio processing, the efforts here lack bass and distort badly even when not at maximum volume. We do wonder if Harman/Kardon involvement would have made a difference, as we were ever so impressed with its results on the Toshiba NB550D netbook.

Our Z830-10U nipped along thanks to its dual-core Core i5-2467M, which runs at 1.4GHz but can Turbo Clock up to 2.3GHz. For heavy multi-taskers as well as casual video editors, the extra memory will also be a boon. However, if light productivity is all you’re after, the Core i3/4GB version should do you just fine. Speaking of loads, while it’s generally very quiet, the Z830-10U does produce an audible cooling-fan whir when under load.

Graphics are the weakest point of any Ultrabook, since Intel’s HD 3000 integrated effort is hardly anything to write home about. However, in undemanding or casual games it should give you a smooth experience at low settings, as demonstrated by our test of TrackMania Nations Forever (where the Z830 achieved a 41.4fps average at medium detail and 1,280 x 720 resolution).

Battery life was quite strong on the Satellite R830, and thankfully the Z830 follows in its footsteps. In fact, it easily provides the most time away from a socket that we’ve yet seen from an Ultrabook, managing seven hours and 20 minutes (at 40 percent screen brightness and with wireless radios disabled) while the best of its rivals fell short of six hours. In other words, if long battery life is a priority for you, this Toshiba Satellite is the Ultrabook to get.

Finally we come to value, where the Satellite Z830 also holds up well. With its price dipping under £800 for the Core i3/4GB version, it’s the next cheapest 13in Ultrabook after the £680 Acer Aspire S3. Yes, that means the Core i3 S3 is £120 cheaper, but you get a 320GB hybrid hard drive instead of a pure 128GB SSD, far less connectivity, no USB 3.0, no backlighting for the keyboard and shorter battery life. However the Aspire S3 does have better usability and a more stylish design. 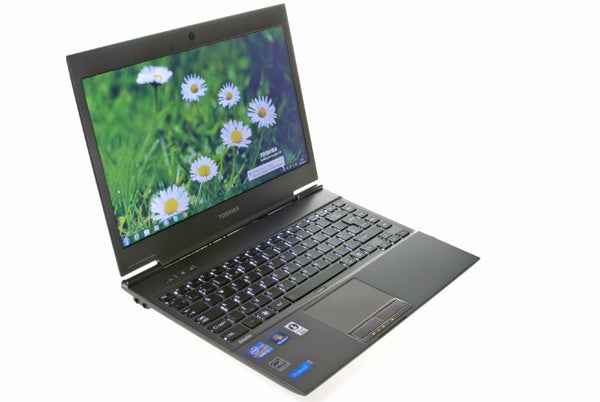 So far then, it’s impossible to call a plain victor in the Ultrabook wars, and which model you get will depend on your preferences, needs and budget. In the meantime, we can’t wait for hopefuls like the Lenovo Yoga to properly dethrone the MacBook Air and Samsung Series 9.

With the Z830, Toshiba has created one of the lightest and most affordable Ultrabooks on the market, yet it’s packed with connectivity, sports a matt screen, and offers premium touches like a backlit keyboard. Unfortunately, its staid design limits its visual appeal compared to rivals, its keyboard doesn’t provide the best typing experience, and poor viewing angles let the 13.3in screen down badly. Like most Ultrabooks we’ve seen, it comes close, but no cigar.