There’s no denying that Intel’s Ultrabook standard has had a major, positive impact on the PC industry. With minimum guidelines about weight, size, performance and materials, we’ve seen a surge in ultraportable laptops that actually look and feel every bit as premium as their pricing suggests. There was only one real problem with the Ultrabook, at least if you were AMD: its processors/platforms aren’t invited to the party, as the standard, naturally enough, specifies an Intel CPU and platform.

Welcome to the Sleekbook. This HP classification is for ultraportables that don’t quite meet all the Intel guidelines, but still provide a physically comparable product to an Ultrabook. The first one we’re looking at is the HP Envy 6-1006ea, a 15.6in, metal-clad Sleekbook that’s under 20mm thin and weighs 2kg, sporting an AMD APU at its heart. The best news: it’s all yours for under £600. So can it win against the mighty Ultrabook? 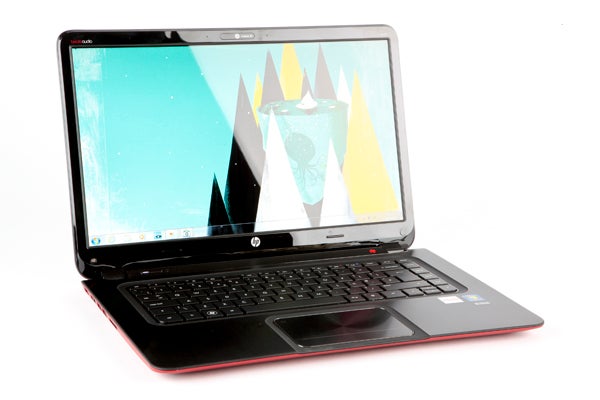 Design
As with most of HP’s Envy laptops, the 6-1006ea looks and feels like a premium product and uses a combination of black and red. The lid and keyboard surround are black brushed metal, while the sides and bottom are a lovely soft-touch red.

Unfortunately the bezel spoils things a little with its cheap-looking glossy black plastic – we would much rather have seen the same red as used for the base. Also, while it looks great, the brushed metal used here makes fingerprints somewhat visible, though much less so than with glossy plastic. 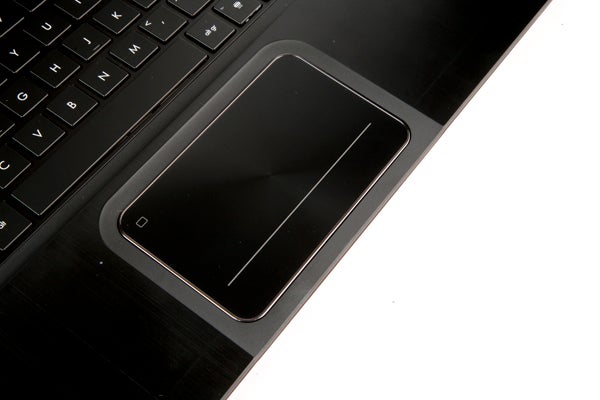 Its touchpad is one of the highlights of the HP Envy 6-1006ea’s design. Raised from a black soft-touch depression, the metal-finish pad sports a subtle concentric ring pattern that’s reminiscent of what we saw on the Asus Zenbook. It works rather nicely, and despite its plastic screen bezel this Envy is one attractive laptop – one to envy, we might even say. Seriously though, it matches most of the Ultrabook crowd for looks.

Build quality is pretty good throughout, with only two minor exceptions: there’s just a wee bit of flex on the keyboard, and the lid doesn’t feel quite as sturdy as we would like. The rest feels brick-solid though. 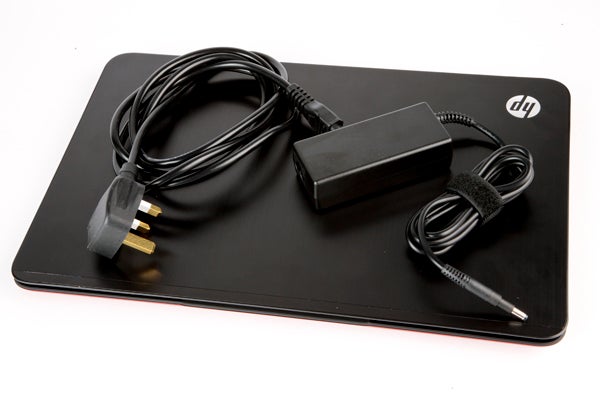 Really, our only major complaint with this HP Envy Sleekbook’s design is a rather unusual one: the power connector is not L-shaped but sticks straight out the side where it’s far too easy to bump or even break, and it’s very awkward to actually hook up to boot. We expect better from you, HP. 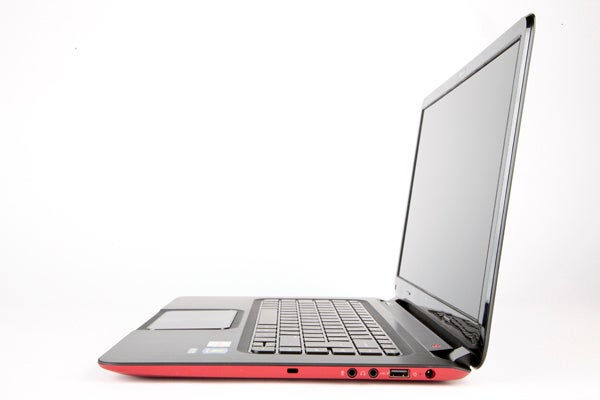 Connectivity
Connectivity is standard for a relatively premium, 15.6in ultraportable. On the left you’ll find a flip-out Gigabit Ethernet jack, HDMI, twin USB 3.0 ports, and an SDXC card reader. The right houses a single USB 2.0 port, along with separate headphone and microphone jacks. As on most ultraportables there’s no optical drive. Wireless is handled by the usual Bluetooth and Wi-Fi combo. 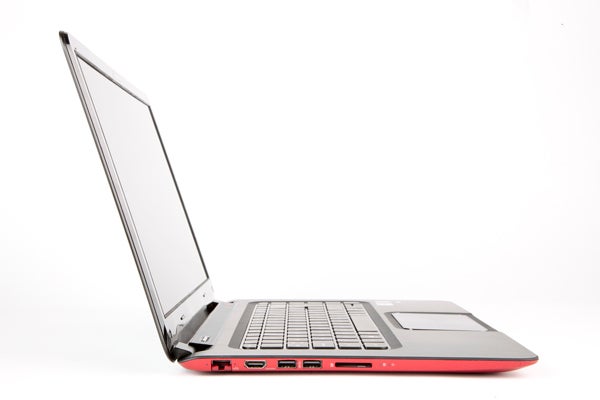 You might have noticed the absence of VGA here. That’s a good thing in our book, especially on a consumer laptop. Honestly, if you’re still rocking a monitor with only analogue VGA, it’s high time for an upgrade. And as for hooking up to a TV, just use HDMI/DVI.

Keyboard
Usually we’re pretty happy with HP’s keyboards, and generally the company’s only second to Lenovo in providing consistently pleasant typing experiences. While feedback on the HP Envy 6-1006ea’s keys is a little shallow, there’s a positive click for each key, and layout is both logical and comfortable. Its lack of backlighting is expected at this price point. 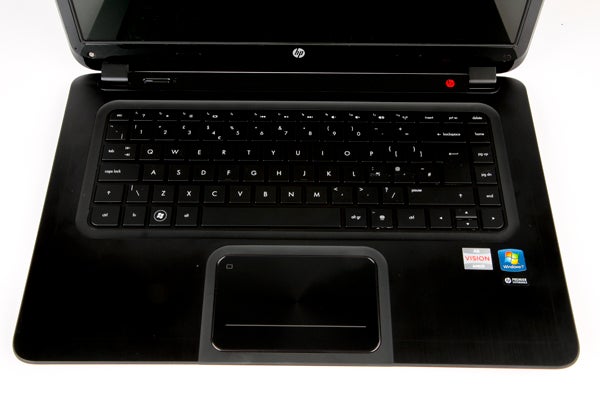 Touchpad
The huge multi-touch touchpad, meanwhile, is a pleasure to use. Its concentric ring patterning provides just the right amount of resistance while its integrated ‘buttons’ are clearly marked and offer good feedback. It also sports a little feature common on HP laptops, where tapping the top left corner of the pad twice disables it, lighting up a tiny LED indicator to tell you so. 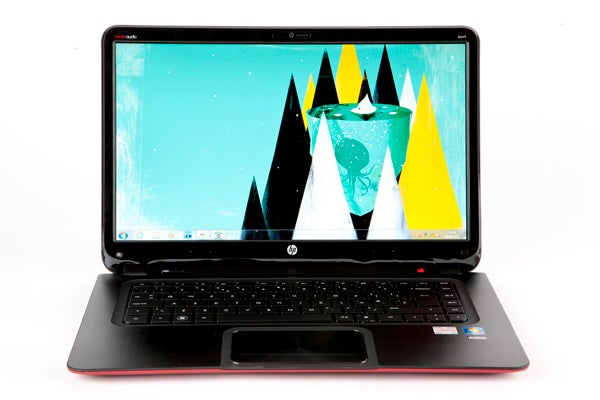 Screen
As affordable laptop screens go, the 1,366 x 768, 15.6in TN panel on the Envy 6-1006ea Sleekbook does a pretty good job. Dark detailing is good enough to spot even the subtlest distinctions, backlighting is even with minimal bleed, and colours seem reasonably vibrant, aided by a glossy finish.

Only viewing angles typically let the side down, with strong contrast shift across the board. Frankly, we can’t wait for IPS or a quality alternative to become the norm as it has in the tablet world. 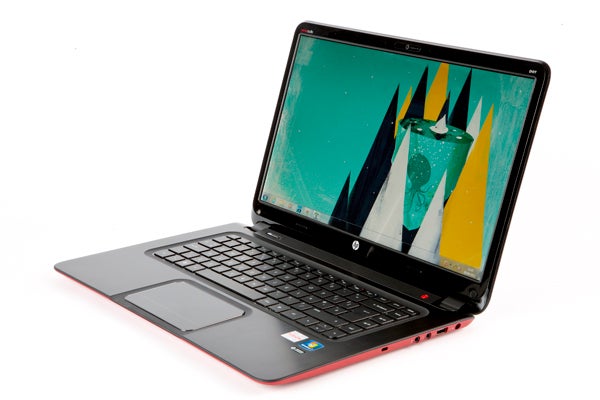 Speakers
Unfortunately, despite the presence of a subwoofer to help them along, the speakers are pretty poor by any standard. The Beats endorsement is a bit of a gimmick, but it should stand for a minimum level of quality on speakers that gain its stamp. 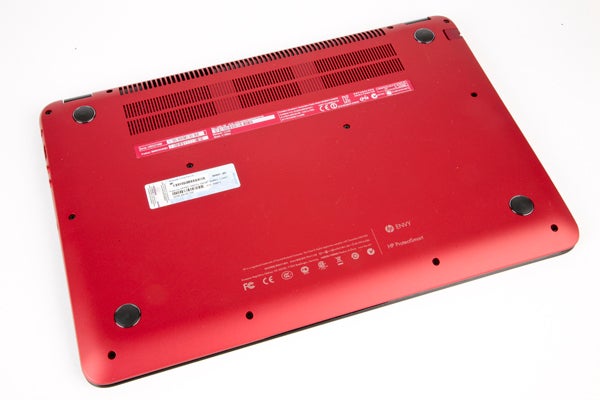 This has clearly not been the case here, as even with the inessential Beats processing and “HP Triple Bass Reflex Subwoofer” there’s about as much bass as a soprano’s tea party. On top of this, there’s severe distortion at anything close to maximum volume, and a lack of distinction that carries across the treble range. Maybe it’s a ploy to make you buy Monster Beats headphones…

Performance
As mentioned, the HP Envy 6-1006ea is built around an AMD platform, which consists of a dual-core A6-4455M APU with Radeon HD 7500G graphics. Starting off with the processor part, we’re talking about a low-voltage 2.1GHz chip that can clock up to 2.6GHz.

AMD seems to have nailed power efficiency, but performance isn’t quite up to scratch – at least, when comparing to Intel’s Core I offerings. The A6-4455M is significantly slower than a Core i5 and is barely competitive with a low-voltage Core i3. However, while it’s no speed demon, it’s important to remember that its performance is adequate for the vast majority of what the average consumer will demand from it. 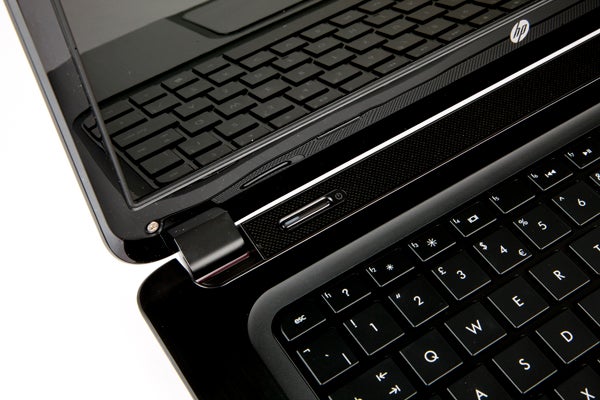 HP has chosen to back it with 6GB of RAM, which seems a slightly odd choice but we’re certainly not complaining. Storage comes courtesy of a slow 500GB hard drive with no hybrid SSD component to speed things along. This is yet another factor contributing to an experience that’s not quite as smooth as your average Ultrabook. At least the HDD is protected by HP’s ProtectSmart, which parks the drive head when its accelerometer senses a fall.

Where the AMD platform can come out top occasionally is when it comes to graphics, if only by a small margin. The Radeon HD 7500G is in some cases better enough than Intel’s HD 4000 integrated graphics to give you just a few extra frames per second in certain GPU-intensive games, but overall it’s a fairly even contest.

It’s worth noting that the Envy 6-1006ea stays reasonably quiet and cool even when under load. 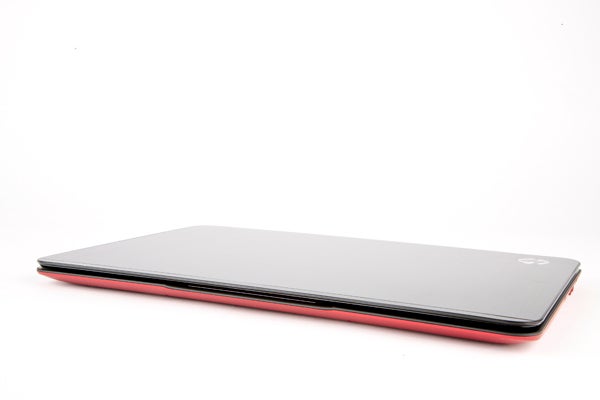 Battery Life
Where this AMD Sleekbook shines is when it comes to battery life. With over eight hours in our test, it kicks some serious Ultrabook behind. To give a neat comparison, the Acer Aspire Timeline U M3 581T is a comparable 15.6in budget Ultrabook with a Core i3 and mechanical hard drive thaqt performed well by Ultrabook standards, yet its seven hour figure is still a full hour less than the Envy 6-1006ea.

Value
This is a tough one. Based on its exterior, connectivity and battery life, we’d say the HP Envy 6-1006ea at £599 direct from HP was a bargain for the price – if you’re after a super slim laptop this large. The average-performing innards do give us just a little bit of pause, but if you want a machine for web-browsing, watching movies, and basic productivity, this Sleekbook is more than up to the task. 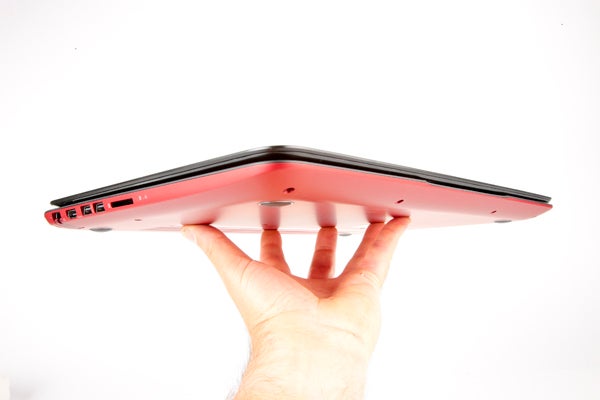 Better yet, the apparently identical HP Envy 6-1006sa can be found online and in the high street for a mere £550. However, while this is nearly £100 cheaper than most affordable big-brand Ultrabooks, there’s always the Acer Aspire Timeline U M3 581T, which can be found for as little as £450. Mind you, we would happily pay the extra £100 for the HP Sleekbook’s nicer design, better keyboard, superior connectivity, more generous specs, and longer battery life – just keep in mind actual CPU performance will be a little lower.

It’s also worth noting that there are a lot of new laptops waiting on the launch of Windows 8, so you may wish to hold off until October – though of course this Sleekbook will be upgradeable to Microsoft’s new OS at the current offer price of £15.

HP proves that AMD can play in the sleek ultraportable game just as well as Intel. Performance might not be quite on the same level, but the HP Envy 6-1006ea Sleekbook makes up for this with a cheaper price and longer battery life. Overall, it’s an attractive, well-built and very affordable machine, and definitely recommended if you’re after a light and stylish 15-inch laptop.