The Dell XPS 13 (2020) is the best Ultrabook you can buy right now. The competition offers flashes of brilliance, while Dell’s flagship shines brightly across the board. From the joyous keyboard and impressive form-factor to an awe-inducing display and peak 10th-gen performance, Dell sets the standard

The Dell XPS 13 has been the one to beat in the ultrabook world for some years now. However, competition is fiercer than its ever been with other manufacturers innovating across the board. Does the Dell XPS 13 (2020) keep its place atop the ultrabook mountain?

With the new Dell XPS 13, the company isn’t relying on massive innovation or gimmicky features. Dell is choosing to hone the formula that it already has and knows that it works. That’s not to say the new model doesn’t have a couple of new additions that help it along the way though.

The tough competition that Dell is facing comes from devices like HP Spectre x360 13, Surface Laptop 3 13 and Lenovo Yoga S940. These ultrabooks are extremely strong competitors so Dell can’t rest on its laurels.

However, the Dell XPS 13 (2020) isn’t cheap – and it will also need to justify its price against the ever-rising tide of quality mid-range laptops. Dell now even has challengers from within its own ranks, if you fancy a bit more size or additional GPU power, with the announcement of the Dell XPS 15 2020 and Dell XPS 17 2020.

Dell hasn’t reinvented the wheel for its XPS 13 (2020) update, but the company has nicely demonstrated that a few tweaks can work wonders.

“A beautiful Tardis” doesn’t sound all that appealing – but stay with me. Never has an Ultrabook felt like it squeezes so much laptop into such a small form factor. 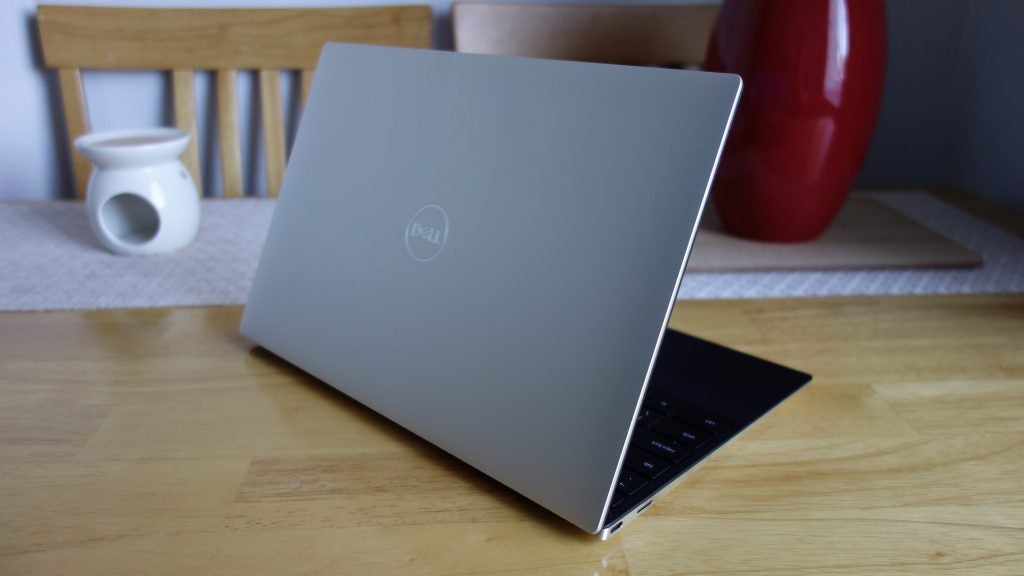 The metal outer body and thin frame lend themselves to a super-sleek and ultraportable design. Yet, when you open the Dell, you’re greeted by an inviting well-sized keyboard and a stunning InfinityEdge display.

The carbon-fibre-inspired look on the inside may not be for everyone, but I’ve definitely warmed to it during my review time. It allows the Dell a point of differentiation over the competition while helping the laptop keep a pleasingly low 1.2kg weight. 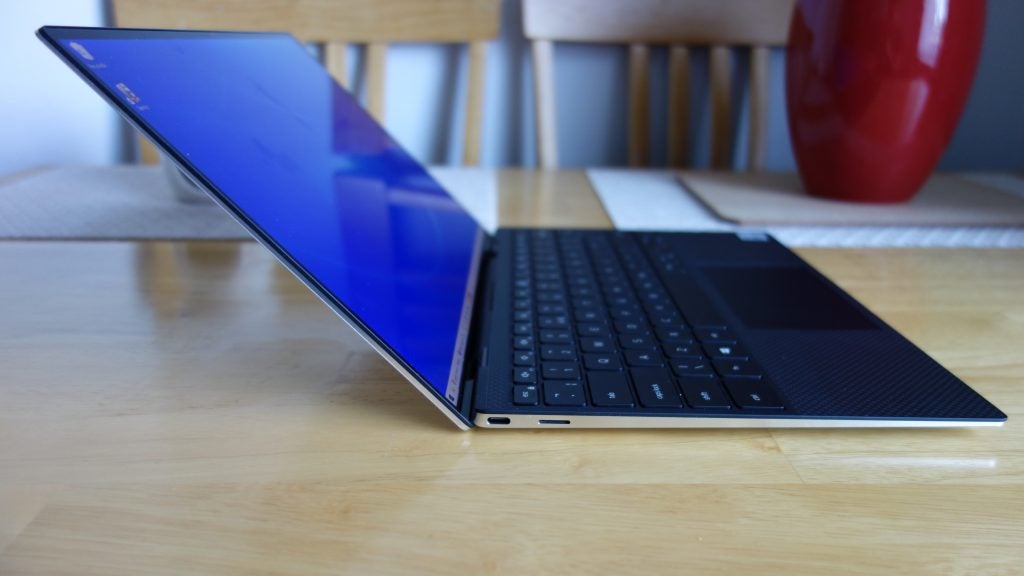 We were sent in the Black model for review, which comes with a silver outer shell. This model definitely sports a more modest look next to the Arctic White version, but the latter is perfect for those looking for a more eye-catching unit.

In terms of ports, you’re not really spoilt by Dell. You get two Thunderbolt 3 USB-C ports on either side of the device, both of which can charge the laptop. Plus, a headphone jack and a microSD card slot. 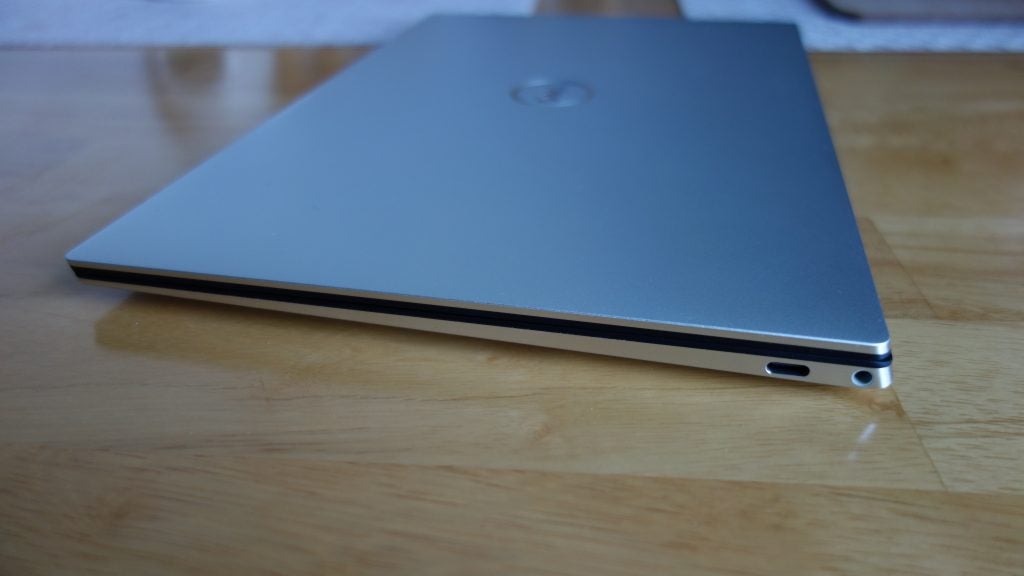 As such, you’ll likely be living that dongle life with the XPS 13 2020 – and Dell acknowledges this by including a USB-C to USB-A dongle in the box.

The lack of ports isn’t ideal; some competitors have managed to squeeze USB-A or even HDMI ports on similarly sized devices. However, I’m such a fan of this current design that I’m not sure I’d be up for Dell making sacrifices for the extra ports.

The new Dell XPS 13 (2020) offers up a near-faultless keyboard and trackpad combo. The keyboard is up there with the very best laptops – maybe only topped by the stellar keys on the Surface Laptop 3.

The typing experience is remarkably clicky, considering the laptop’s svelte form; it feels like it has more travel than it actually does. 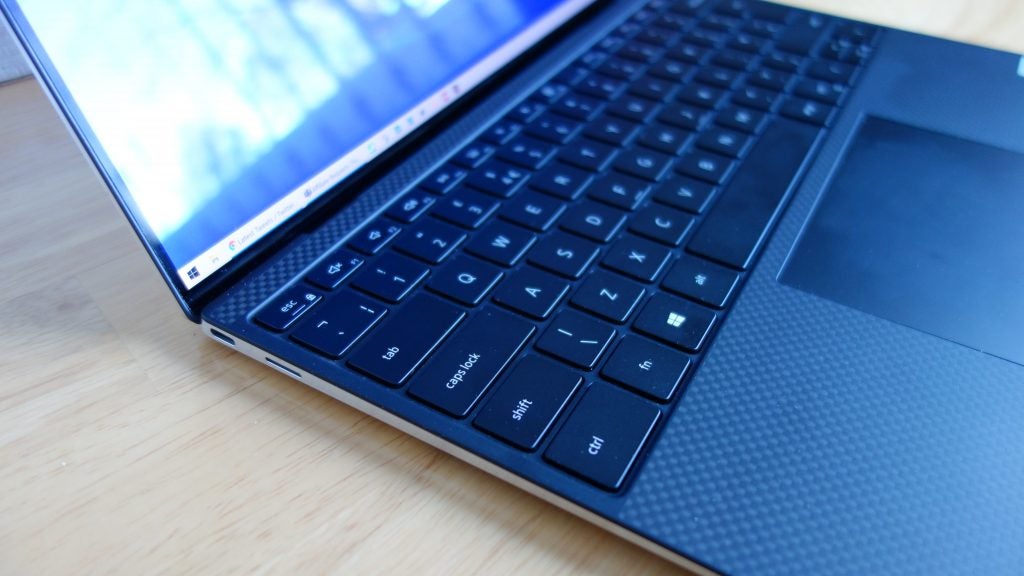 The keyboard has only one chink in its armour, and this comes via some mild heat. Around the centre to top of the keyboard (think the 6 and 7 number keys), the keys do become slightly warm to the touch. You won’t notice this in everyday typing, so it really isn’t a biggy and it’s far from uncomfortable, but it’s just something that might catch your attention now and then.

The trackpad is equally up there with the best and, like the keyboard, feels like it offers more travel than it does in reality.

There’s a pleasing and distinctive thunk as you click the pad and it’s consistently responsive from corner to corner. The trackpad definitely stands out compared to many other laptops, so it may take some getting used to – but you will, and it will be worth it. 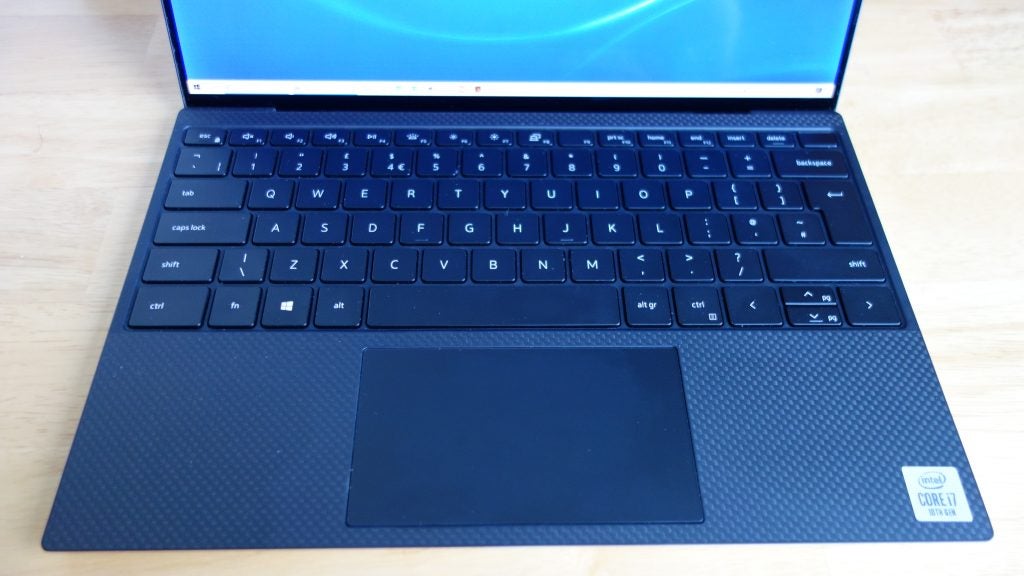 To the top-right of the keyboard is a fingerprint scanner for Windows login, which doubles as a power button. Throughout my use, it remained super-quick but I did run into an issue where it stopped working.

This appears to be a known problem, which can be fixed by ensuring you’re on the latest version of Windows and have the updated Dell drivers installed.

We’ve reached out to Dell for more information on this to check if recent updates have provided a permanent fix and will update this review accordingly.

There’s also a Window Hello-enabled webcam. It’s impressive that Dell has moved away from its “webcam at the bottom of the display” woes and still managed to cram this year’s cam into a super-thin bezel. The quality of the webcam isn’t phenomenal but, at 720p, it’s definitely a welcome inclusion.

While top-notch consistency is the real triumph of the Dell XPS 13 (2020), if we had to pick out one feature as this year’s best then hands-down it would be the InfinityEdge display. The impressiveness of this display tech shines even more with the new 2020 models of the XPS 15 and XPS 17, creating some of the smallest yet powerful ultrabooks in their class.

You just never get used to how much screen Dell has managed to fit into this diminutive laptop chassis. The trimming down of the bezels certainly helps, but it’s also Dell’s recent move to a 16:10 aspect ratio for the XPS line that really makes this display. You won’t feel at all disadvantaged by the 13.4-inch size. For on-the-go productivity, this screen is ideal. 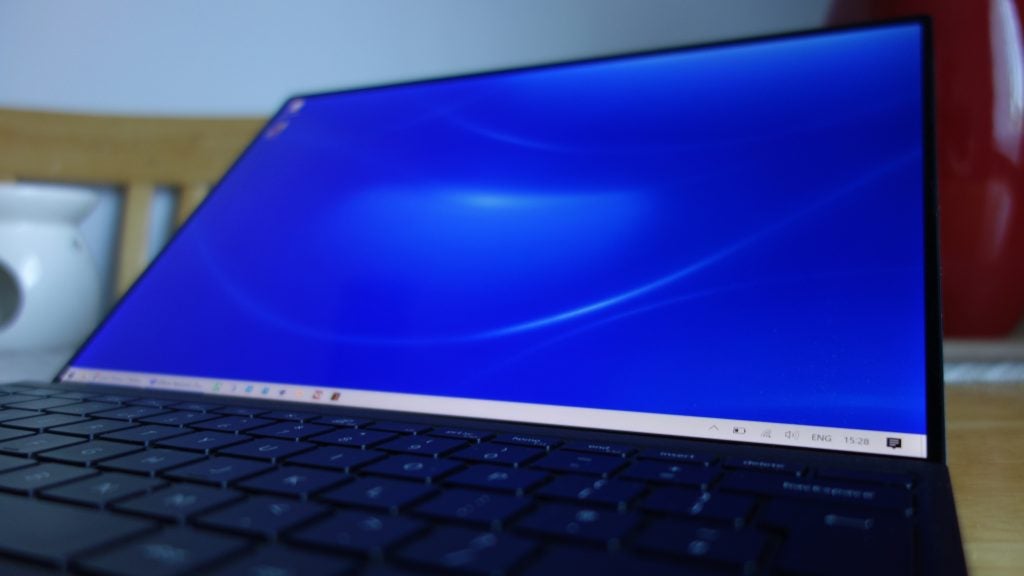 Aside from the size and shape of the Dell screen, the quality of the display is impressive too. Our 4K review model looks stunning, even when carrying out run-of-the-mill productivity tasks. In addition, it offers one of the best experiences on the market for watching YouTube, Netflix and the like.

The Dell is only surpassed by 4K AMOLED offerings such as the HP Spectre x360 13, but this gorgeous screen will rarely leave you longing for something better.

The Dell XPS 13 (2020)’s display capabilities aren’t best-in-show, but it’s nipping at the heels of those that are – continuing the laptop’s high-class consistency up and down the spec sheet.

Like much of the high-end Ultrabook competition, the Dell XPS 13 laptop comes with Intel’s latest 10th Gen Ice Lake chips at its heart. UK models kick-off with an i5 version, while in the US there’s a cheaper i3.

Our £1749 review model sports Intel’s top Ice Lake chip, the i7-1065G7, alongside 16GB of RAM, 512GB SSD and the aforementioned 4K display (you can also choose between touch and non-touch).

Prices do seem ever-changing in the Dell UK store – and, at the time of writing, you can now curiously pick up a similar model but with a 1TB SSD for £1649 – so watch out for that.

The Dell XPS 13 bats back anything you can throw at it in terms of productivity, from almost 20 tabs in Chrome before any slowdown to comfortably dealing with word-processing/browsing multi-tasking.

As with all Ice Lake laptops, they aren’t really made for gaming despite having impressively powerful integrated graphics. You can play less demanding games such as Fortnite, Apex Legends and more on low settings; but it isn’t ideal.

Similarly, you won’t be using this laptop for heavy photo or video editing. For basic stuff, however, it’s definitely capable.

Away from the horsepower on offer, the Dell touts good performance in a couple of other areas as well. The speakers on this laptop are quite remarkable given its size, offering decent quality even at loud volumes – and it can get really loud.

Audiophiles will notice a lack of bass and depth that’s available on devices such as the Surface Laptop 3 – but, once again, these speakers are a marvel for this super-sleek form-factor.

Battery life has been a big bugbear of high-end Ultrabooks over recent times and, unfortunately, Dell hasn’t quite cracked the equation. However, it still manages to top competitors. 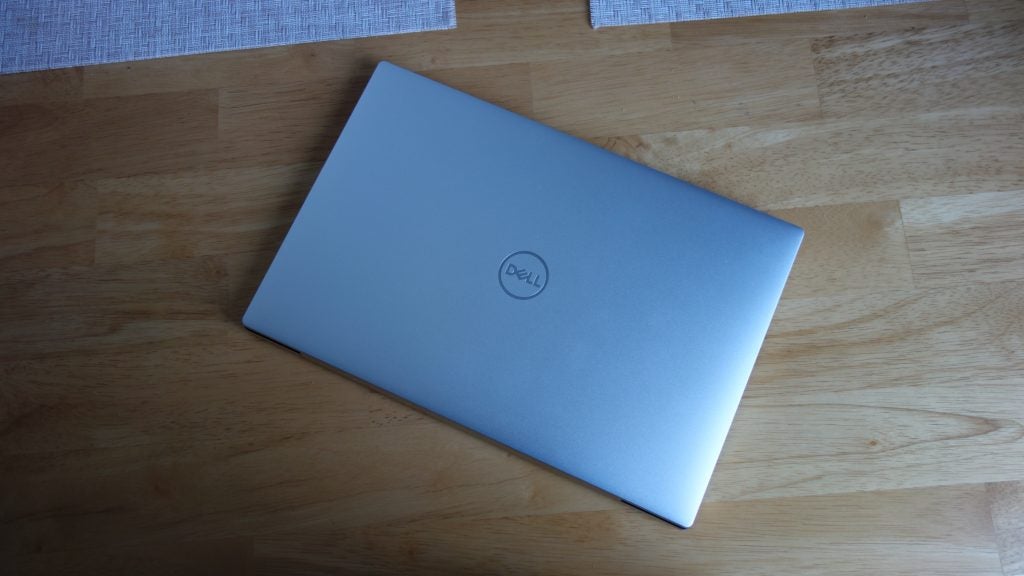 Our battery benchmarking came up with six hours’ battery life for our 4K Dell XPS 13 (expect longer for the 1080p version, with our experience with other laptops indicating you tend to get between three to five hours more).

This benchmark was initially impressive, surpassing the 4K Ultrabook competition by almost two hours. However, our real-world use of the XPS 13 has seen times between 4hrs 30mins and 5 hours.

The results are still pleasing and above the performance we’ve seen from alternatives, but it doesn’t soar over them quite so much. 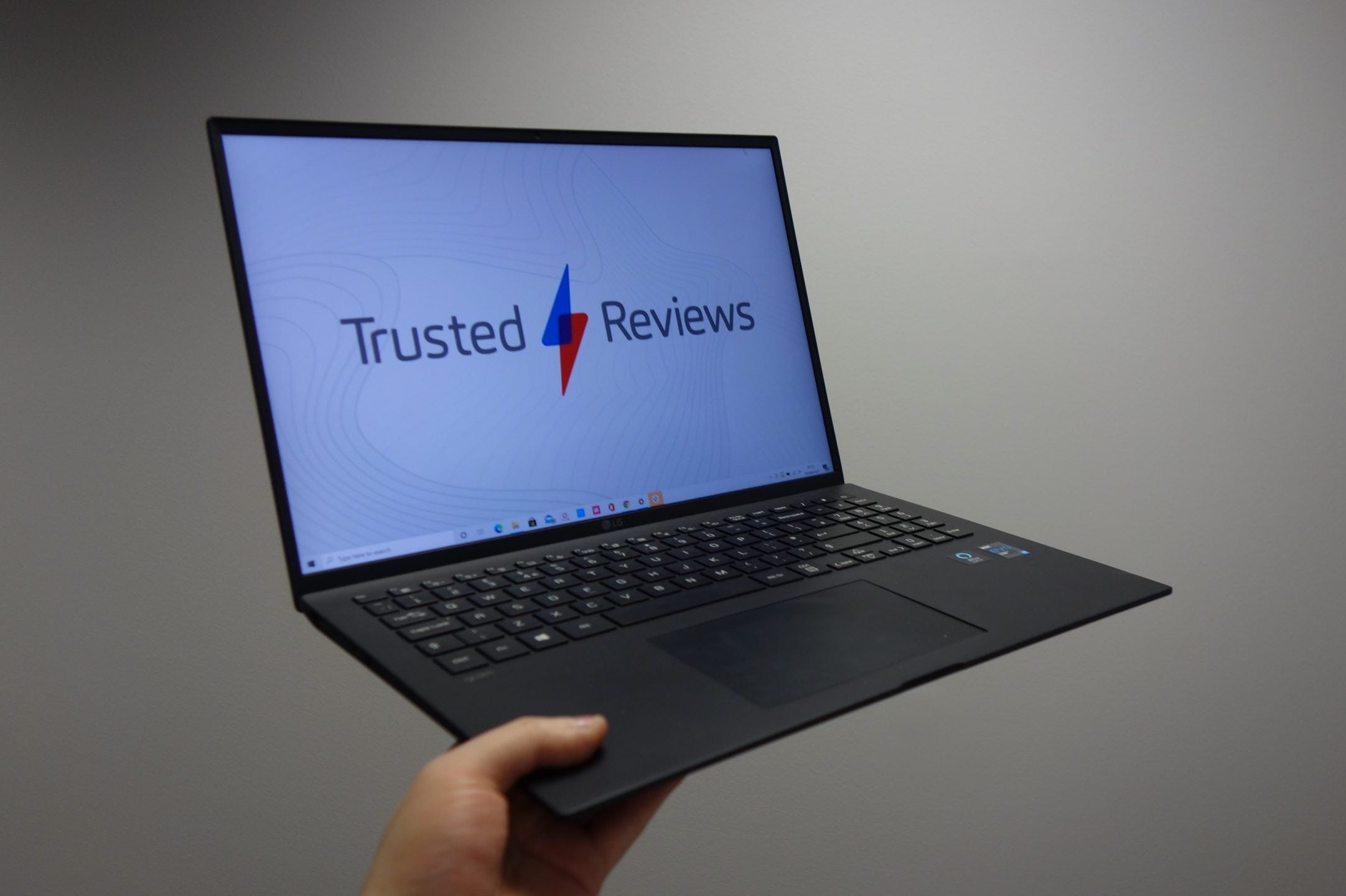 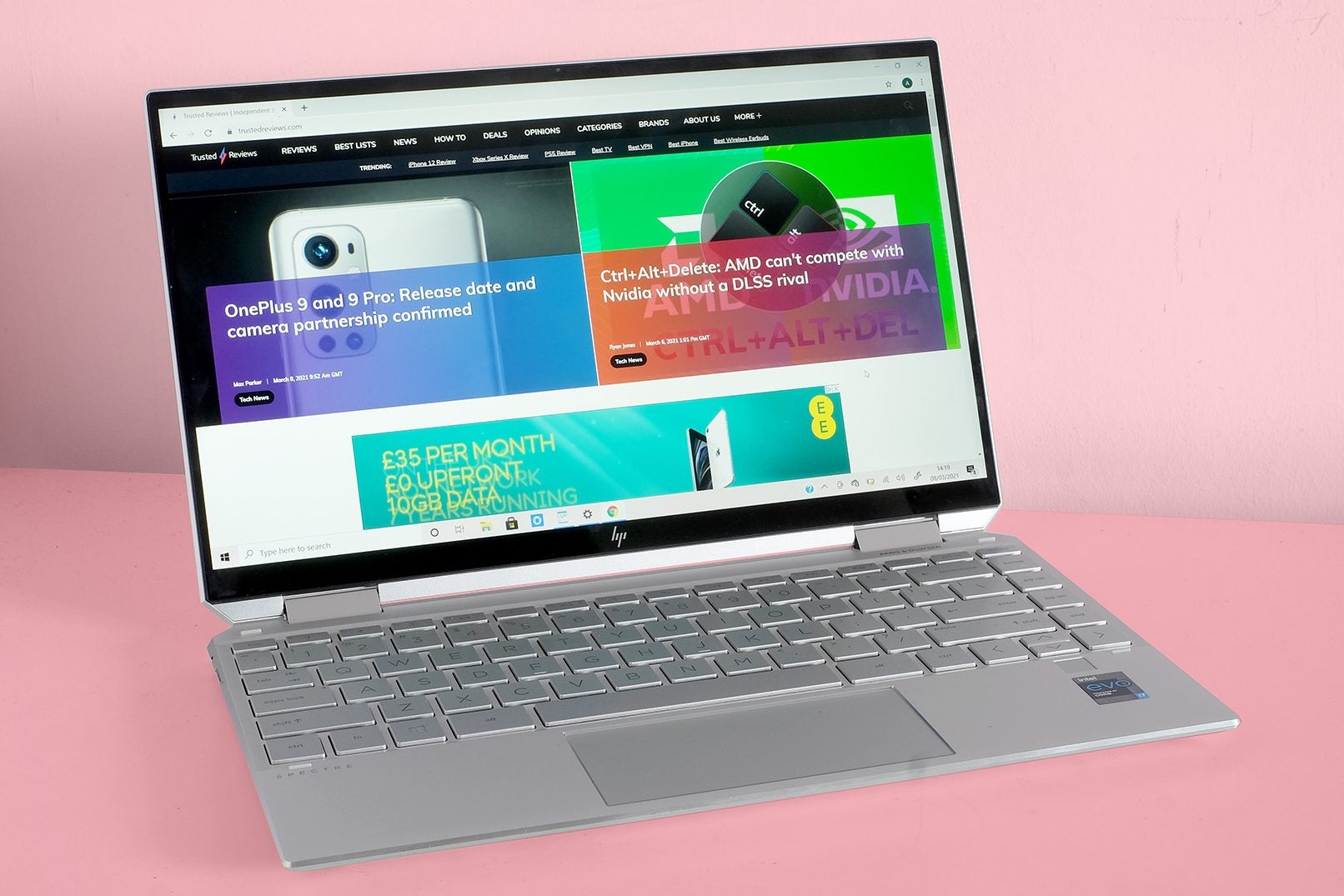 Is the Dell XPS 13 a touch screen?

There are both non-touch and touchscreen models of the Dell XPS 13. Touchscreens are generally added to the 4K display configurations which can be quite expensive.

How big is the screen on the Dell XPS 13?

What games can Dell XPS 13 run?

The Dell XPS can only play low demanding games since it’s using integrated graphics rather than a discrete GPU. We managed to get both Apex Legends and Fortnite running on it, albeit with low graphics settings. Indie titles and Minecraft should also be able to run on the XPS 13.