The Samsung Series 9 900X3B is the most attractive and premium-feeling 13-inch ultraportable we’ve seen since the 2011 Macbook Air. Have Ultrabooks finally come of age? Well, no, because Samsung doesn’t class the Series 9 900X3B as an Ultrabook, despite it meeting or exceeding every ‘requirement’. Frankly, this is because the company feels Ultrabooks have become too mainstream, and its new Series 9 is a premium ultraportable for which you pay a premium price. But does it do enough to elevate it above the norm? Yes, and then some.

We’ve already mentioned that the Samsung Series 9 900X3B is an amazing looking laptop, but it’s also incredibly thin, with its sub-13mm profile making it the slimmest 13-inch laptop we’ve seen. But merely being the thinnest isn’t enough; it’s also the lightest, weighing a mere 1.15kg. It has the best screen of any ultrabook we’ve seen, and isn’t far off being the best we’ve seen on any laptop ever. 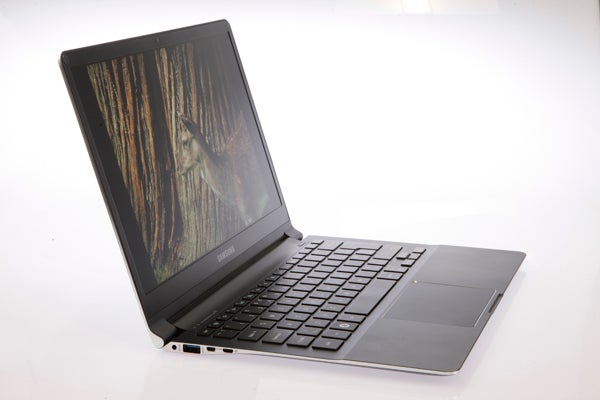 It’s a 13.3-inch matt-finish panel with a high 1,600 x 900 resolution and near-flawless viewing angles resultant of it using PLS technology. MacBook Air aside, it even has the best speakers. Its backlit keyboard is great to type on and its touchpad easily matches up. And to top it all off, Samsung claims the Series 9 900X3B has up to 10-hours battery life! 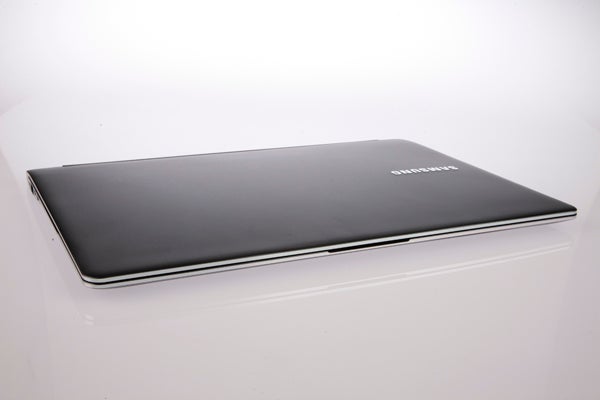 Unlike many ultrabooks that use several bolted together panels, the Series 9 900X3B comes packaged in a true unibody chassis, like that of the MacBook Air. The entirety is anodised gunmetal blue/grey, aside from the edges which have been left bare aluminium, making for a nice contrast and further emphasising that incredible thinness. 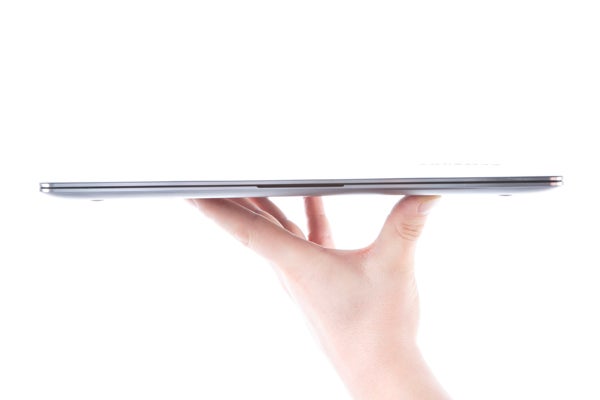 Build quality matches its design. Far more so than other, already-impressive unibody ultrabooks like the Asus Zenbook UX31, the Samsung 900X3B really is rock-solid. There’s not a hint of flex or creak, and it just exudes quality. Even the hinge has a far more deliberate action than we’re used to from thin laptops.

Finally then we have a Windows PC laptop that matches the best Apple has to offer not just in looks but in feel too. Thankfully, the new Series 9’s finish also picks up far fewer fingerprints than its brushed black duraluminum predecessor. 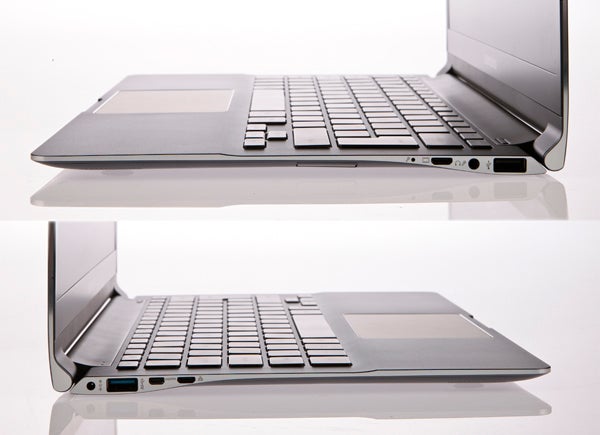 Despite being the thinnest Ultrab… – sorry, we mean ultraportable – we’ve seen, Samsung hasn’t compromised on the Series 9’s connectivity, which is an impressive feat in itself. On the left you’ll find the laptop’s single USB 3.0 port for hooking up fast storage, followed by a microHDMI port for outputting digital video. Samsung does not supply a regular-size HDMI adapter but then microHDMI cables are cheap and plentiful. The next port is microGigabit Ethernet, which uses a supplied adapter to plug into conventional wired networks.

On the right there’s a full-size SDXC card slot, microVGA port (again with included adapter), a 3.5mm headphone and microphone combi jack, and a USB 2.0 port. For wireless there’s Bluetooth 4.0 and Wi-Fi N. That pretty much covers every possible requirement, and the only absentee on the Samsung Series 9 900X3B we would have liked to have seen is ThunderBolt. 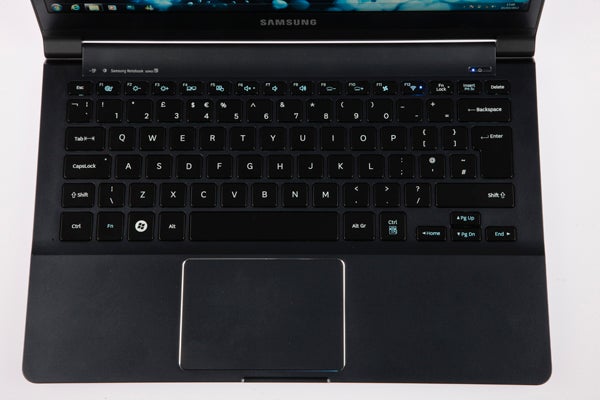 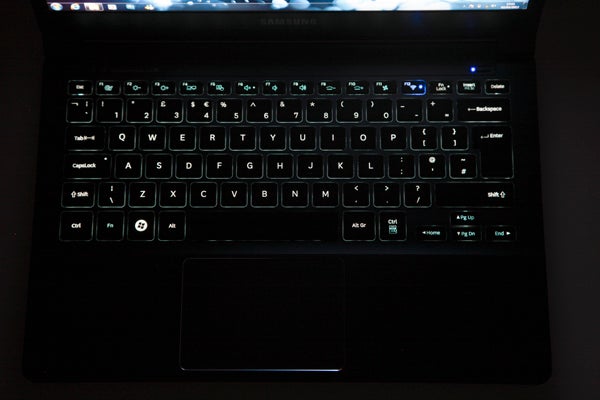 It’s the same story with the 900X3B’s huge buttonless glass-surface touchpad. It’s lovely to the touch, large enough for comfortable gestures, and flawless in its responsiveness. Windows still can’t match MacOS for multi-touch gestures but this is among the closest alternatives. 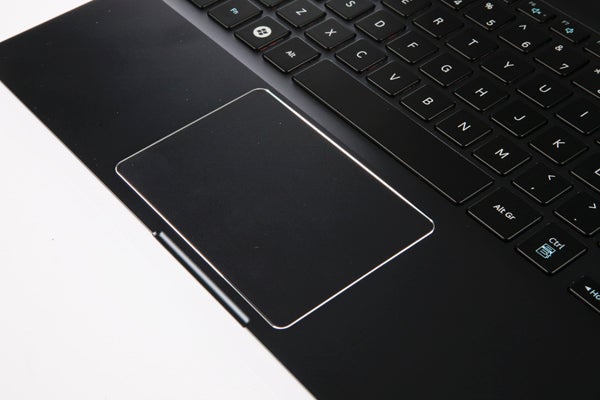 Screens have been the one consistent points of weakness on most Ultrabooks to date, and in fact on ultraportable laptops in general. The exceptions were the non-convertible version of the Lenovo ThinkPad X220t with its IPS display, the MacBook Air 11 and 13in with their decent TNs, and Samsung’s own previous Series 9 900X3A, which quite simply had the best TN screen we had ever seen on a laptop. Its only real downside was that its resolution was the common 1,366 x 768, where 13in rivals like the Asus Zenbook UX31 offered 1,600 x 900. 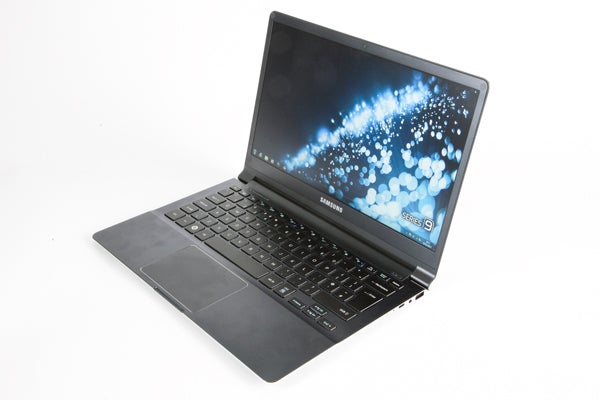 With the new Series 9 900X, this has been remedied. Samsung’s latest ultraportable sports a lovely semi-matt 13.3in panel with a high 1,600 x 900 resolution and incredibly narrow bezel. Best of all, it actually uses a PLS rather than TN panel. This mostly eliminates TN’s weaknesses, providing near-flawless horizontal and vertical viewing angles. 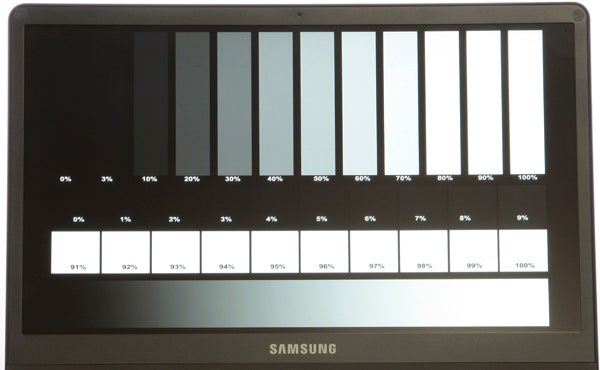 Black levels are close to excellent, with only the darkest shade on our greyscale invisible. This means you’ll miss almost no detail even in dark movies and games. Meanwhile colours are bright and vivid without being too oversaturated, and sharpness is excellent thanks in part to the high resolution. There’s also very little backlight bleed or unevenness, with only some very mild undulations in light level near the bezel’s edge.

Thanks to the unique combination of excellent viewing angles, deep blacks and colours, a matt finish and its 1,600 x 900 resolution, we have little hesitation in calling this the best screen we’ve yet seen on an portable laptop. It’s truly a worthy accompaniment to Samsung’s most premium ultraportable and we can only hope that, one day, all laptops will have displays this good. 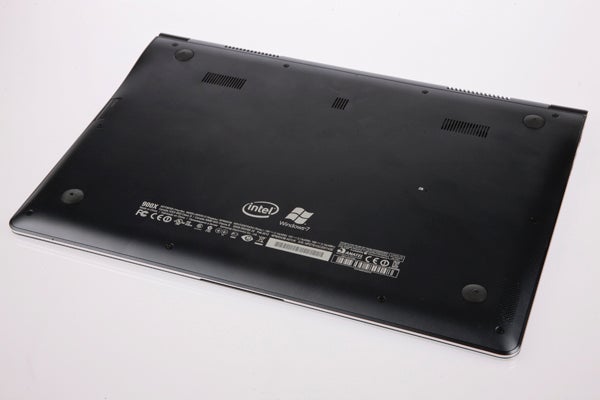 A laptop so thin can’t possibly produce good audio though can it? Well, yes, apparently it can. The 900X3B’s side-facing speakers, subtly integrated into the base, manage adequate volume levels with plenty of clarity and detail, and even a halfway decent amount of bass. Combined with the amazing screen, it makes this a great laptop for watching movies on the go.

So far the latest Samsung Series 9 900X3B hasn’t put a single virtual foot wrong, giving us nothing to criticize. Specifications are also decent, pretty much on a level with most Ultrabooks. There’s a dual-core Intel Core i5 2467M with support for up to four virtual cores. It runs at 1.6GHz by default but can Turbo clock up to 2.3GHz, and should handle most tasks without breaking a sweat.

It’s backed by the usual 4GB of RAM and a 128GB SSD for storage. The
sole weak point is the usual ultrabook/macbook air problem of mediocre
graphics, as Intel’s integrated HD 3000 barely manages decent frame
rates even in older games. This was demonstrated by a 36.5 frames per
second average in TrackMania Nations Forever, meaning anything more
demanding will be running like a slideshow. In other words, casual
gamers only need apply. 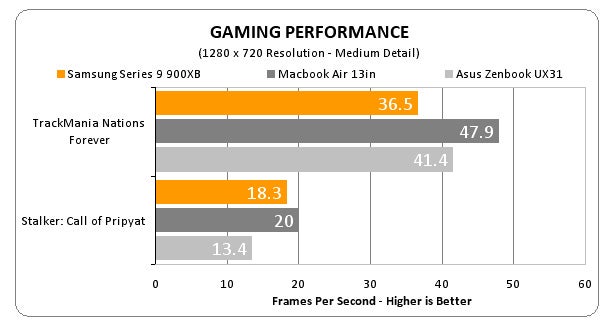 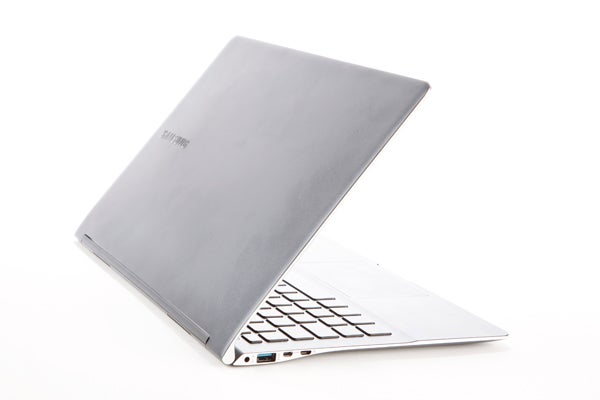 Battery life is the other aspect of the new Series 9 that doesn’t particularly wow us, since it’s comparable to most Ultrabooks on the market – not that the 900X is an Ultrabook, of course. If this is the result of its ‘slimmest’ boast, we would rather have had a few extra millimetres on this ultraportable – though it’s important to remember that this will still be plenty for many people.  As mentioned at the start, though, we’re in the process of restesting this on a full production sample to see if our lowish figure is a true reflection.

Last but not least, how does Samsung’s premium ultraportable laptop hold up when it comes to value? At £1,200, it’s one of the most expensive ultraportables on the market, even costing £100 more than the 13in MacBook Air. However, if you value quality and style, it’s worth every penny. 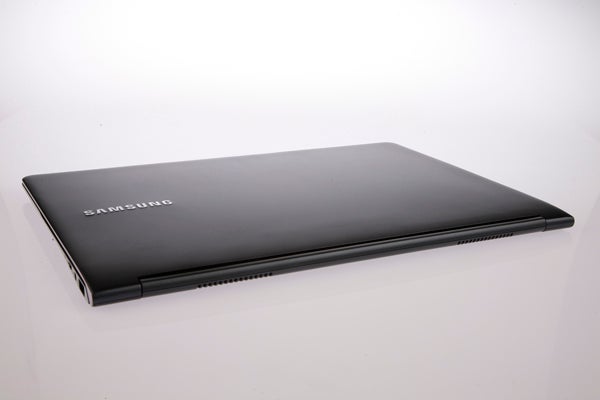 Battery life and performance might be merely average, but in every other regard this is the king among thin and light laptops – due in no small part to its stunning high-resolution PLS screen, which more than justifies the premium over many rivals. 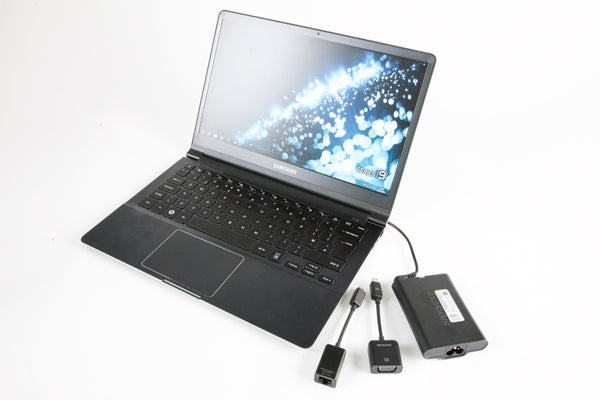 Against the aforementioned MacBook Air, unless MacOS is a priority we reckon it’s well worth the extra to get this thinner, lighter and arguably better-connected laptop with its superior screen. A more compelling alternative is Samsung’s own previous Series 9, which has dropped to around £900 since it was released. It’s not as elegant, light or slim and loves fingerprints, but it offers similar performance, a screen that’s not altogether shamed by the PLS display found here, longer battery life and it sounds almost as good. For £300 less, that’s not bad going.

The Samsung Series 9 900X is not just the thinnest, lightest 13in laptop in the world, but it’s also the best-looking, best sounding ultraportable we’ve come across. Its high-resolution PLS screen offers quality above any other laptop display on the market, its connectivity isn’t compromised by its sleek lines, and it’s great to use too with an excellent backlit keyboard and large, sensitive touchpad. Weighed against all this goodness, the 900X3B’s average battery life seems a minor downer, and overall Samsung’s latest ultraportable is worth every penny of its premium price.