The TCL C71’s picture requires a bit of calibration, but once done, it offers appealing image quality. It isn’t bright enough for true HDR, but the gaming performance is fast and the sound system may negate the hurry for adding an external sound system.

TCL has launched 8K and Mini-LED TVs stateside, but its presence on this side of the pond has been a low key affair. There are signs this is changing with the introduction of more Android TVs, while its C71 and C81 QLED TVs provided some competition for Samsung at the cheaper end of the market.

We’ve been wondering whether TCL, like Hisense has done in recent years, could offer an affordable alternative to premium TVs. Having got our hands on the 55C715K QLED, we now have a firmer idea of whether this is the case. 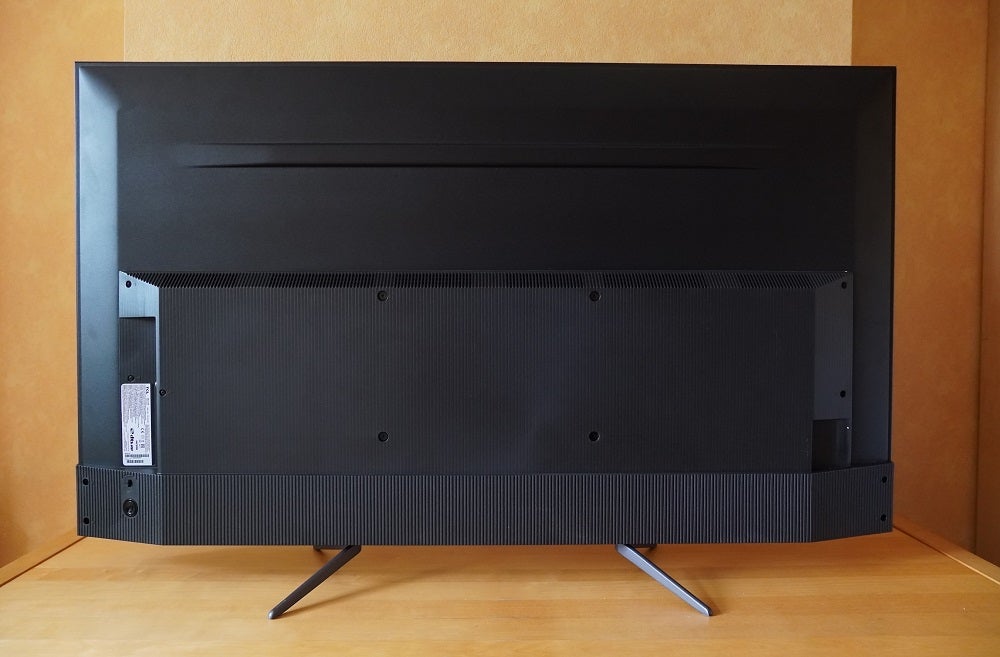 Budget to mid-range TVs tend to focus on functionality over looks, but the TCL C715 sports an elegant and tidy design. The slim metal bezel offers minimal distractions, and the feet – which can be configured in narrow (which I chose) and wide positions – offer flexibility (you don’t get this with the 50-inch model, however). Nor does it take long for the set to be assembled: slot in the feet, tighten the two screws for each foot, and you’re done. 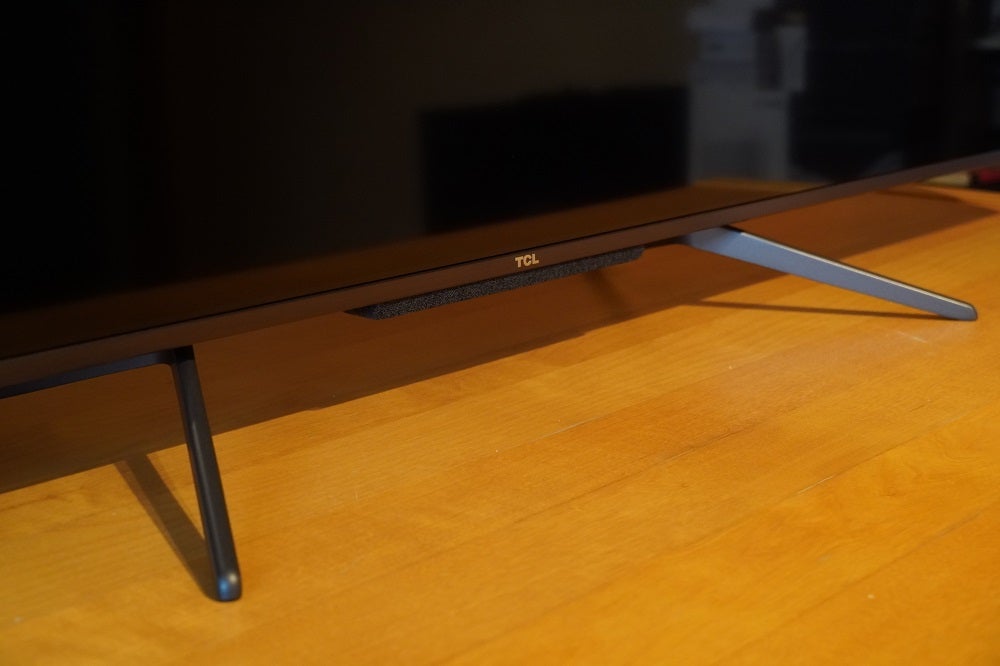 The rear is slim enough (1,229 x 766 x 300mm, HWD with stand) to make wall-mounting a possibility. With connections sitting on the left, if your setup is more suited to the right, then you might need to move things around. The remote, meanwhile, is slim, clicky and responsive, with hotkeys for the near-ubiquitous Freeview Play and Netflix. In the design department, there’s plenty the TCL C715 gets right. 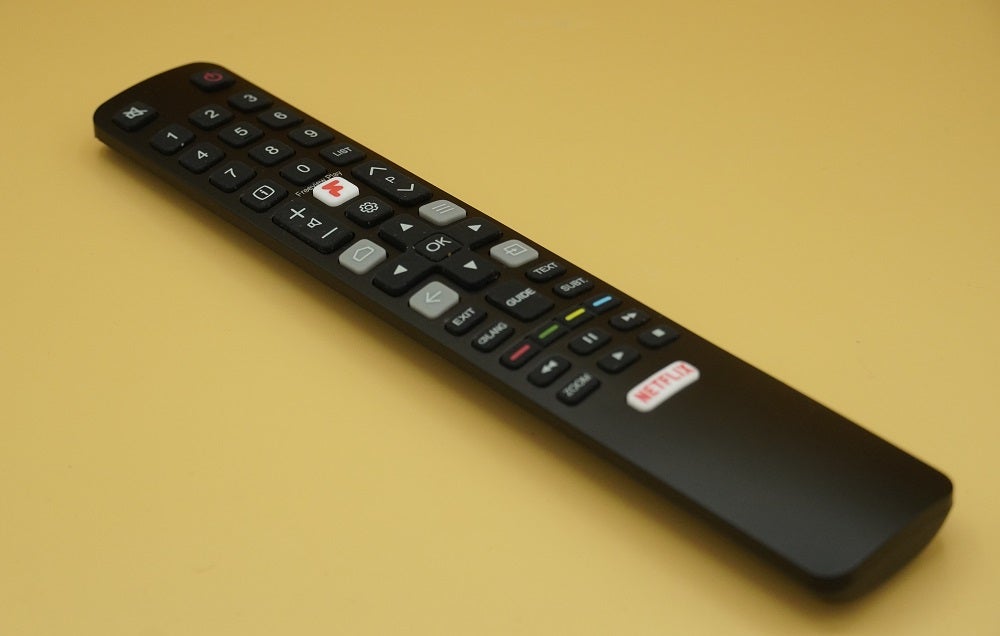 The TCL C715 gets Android TV with Freeview Play integration, which takes care of the UK catch-up apps. You get the usual coterie of streaming apps: Netflix, Prime Video, YouTube, Rakuten TV and Disney+; but there’s no Apple TV or Now TV. The former will likely appear once the C715K receives the Google TV update, but there’s no timescale for that yet.

Android also means built-in Chromecast and Google Assistant. TCL’s own menu is accessible via the grey styled buttons on the remote, but there isn’t as much scope for configuring settings as you’ll see on other brands. Features such as the T-Link (HDMI CEC) aren’t on by default, and others – such as Game and Sports modes – override picture settings on all the HDMI inputs. You lose access to other picture presets until they’re toggled off. 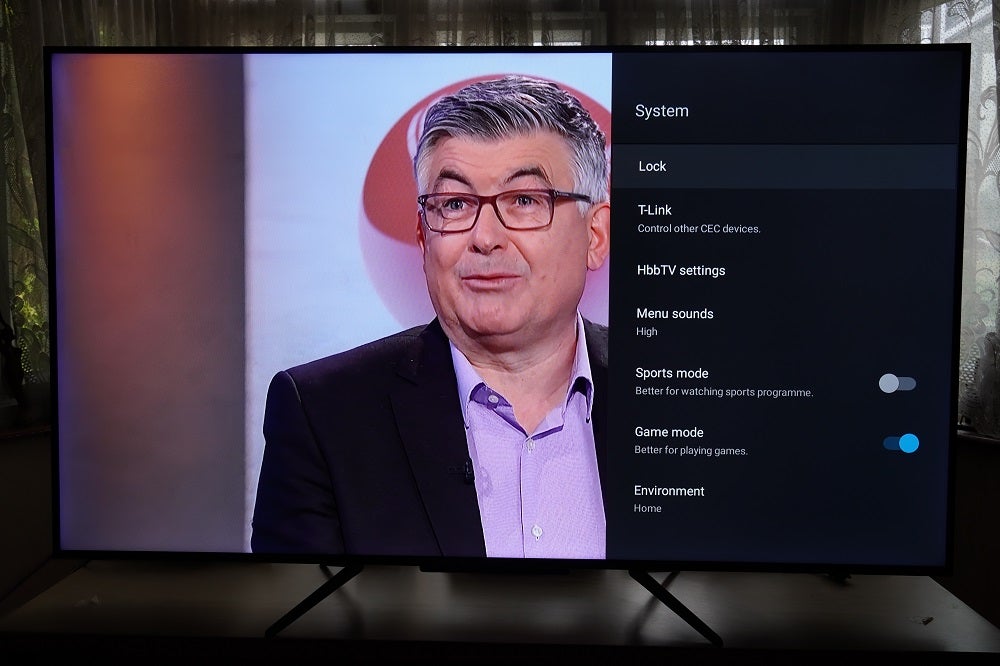 For connections there are three HDMI 2.0b inputs, 2 x USB 2.0, an Ethernet port, headphone, optical out, common interface slot and tuners for satellite and terrestrial. Wireless covers built-in Wi-Fi and Bluetooth. 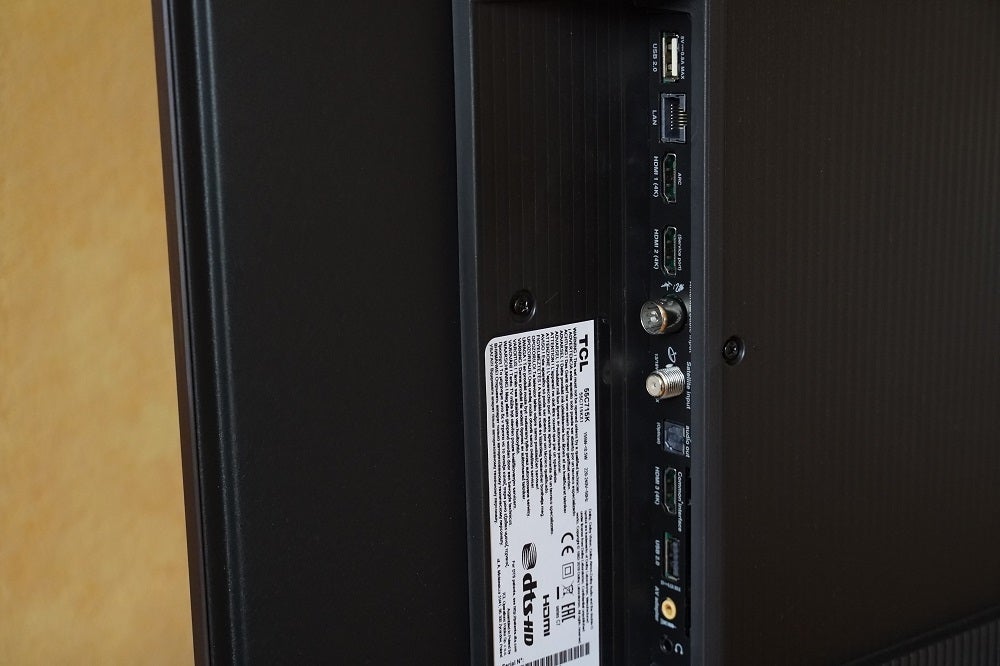 The TCL C715’s Game mode is rapid at 9.7ms, which makes this model an excellent option for gamers; image quality looked great with Horizon: Zero Dawn. I reckon it’s better to toggle on Game mode through the System settings banner than through the picture presets. Latency was more consistent with it toggled on. 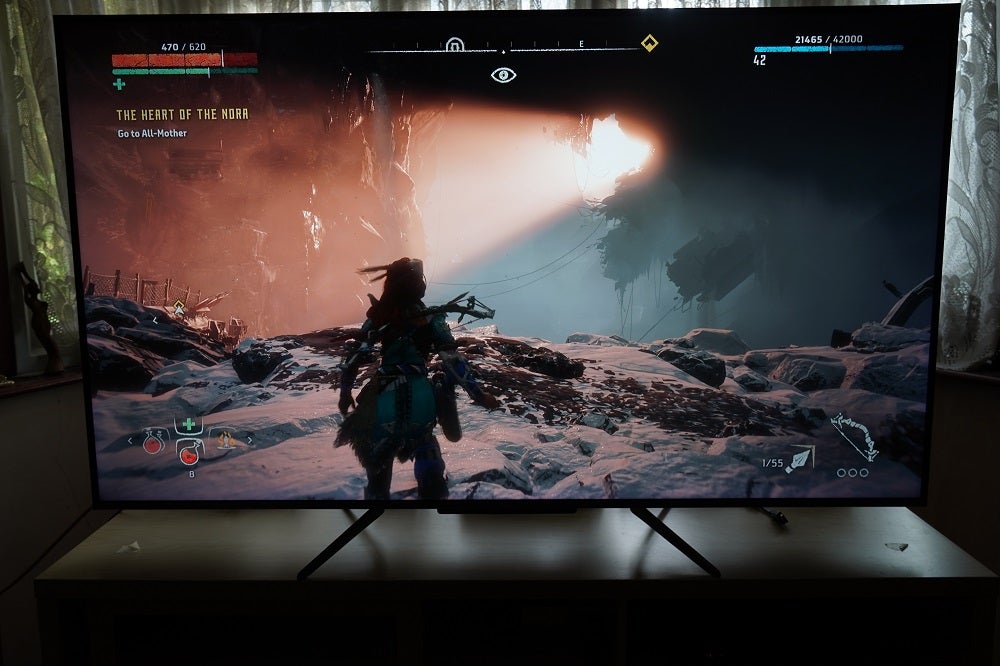 Upscaling of sub-4K content is solid, although not the sharpest and with an element of noise. I don’t think it’s worth changing the Noise Reduction levels, however; the Auto setting looks too smooth and blurry. Fine detail can be a touch soft, depending on what you’re watching, but the TCL puts in a satisfying image. 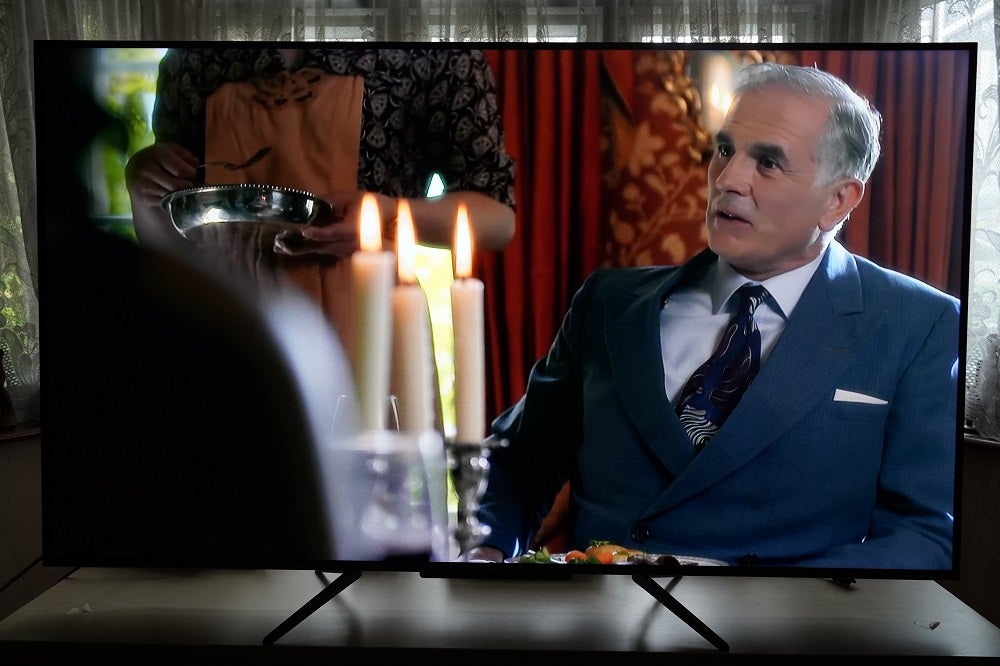 Standard definition performance is also colourful, but suffers from the same softness and lack of sharpness that afflicts every TV. The Vivid preset offers bright, bold whites and optimistic-looking colours, but with the Native colour space on it actually looks decent.

The C715K lacks any form of motion interpolation. It’s most manifest with Dolby Vision content since it lacks its usual slick look, but I can’t say I noticed much in the way of any distracting judder or stutter. An LED Motion Clear setting does exist, but I’d stay clear of it since it adds a distracting “buzz” to the image.

Although it supports HDR10, HLG, HDR10+ and Dolby Vision, with 4K HDR content (Movie preset) it isn’t bright enough for full-screen HDR content; but it is more potent with smaller details and highlights as they frequently have more pop. The 55C715K has a strong sense of colour, and while black levels can be reasonably strong, shadow detail isn’t its strongest suit.

Dolby Vision improves on this with its Bright mode (the Dark version is quite dim). On Skyfall (4K Dolby Vision), colours are expressive, detail levels are great, and the TV digs up the fine detail in close ups of Craig’s hair and scars. 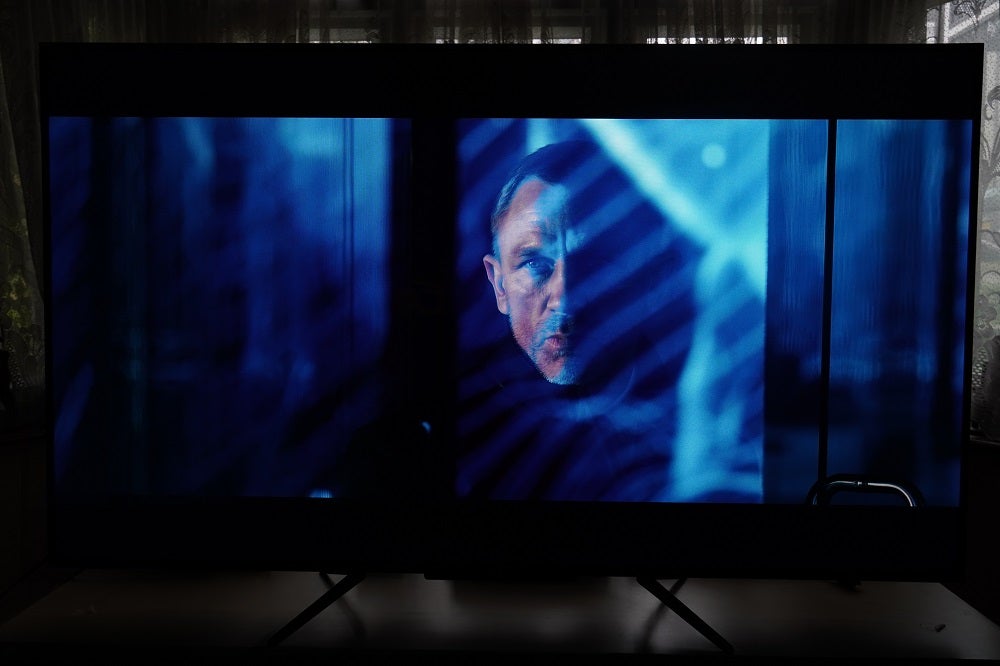 The TV’s ability to tackle shadow detail isn’t as convincing, with black levels over-emphasised in the night-time climax of Jurassic World: Fallen Kingdom. It’s a similar situation with His Dark Materials in 4K HLG (iPlayer). Nevertheless, the latter looks great, displaying a lovely range of colours, detail and clarity. 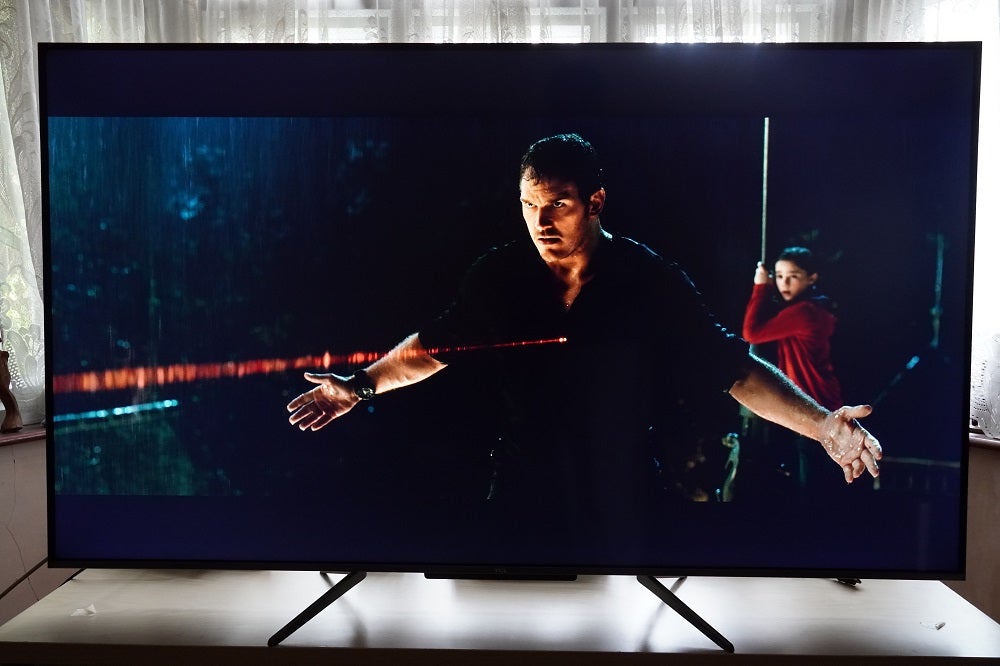 But it’s the TCL’s performance in darker HDR scenes that’s something of an Achilles heel. Watching Captain America infiltrate the Lumerian Star in The Winter Soldier (4K HDR10), as the camera swoops across the ship I could barely make out the cargo or helicopter at the ship’s stern. There’s a few tweaks you can make to help here, such as set the Dynamic Backlight to its Brightness+ level, Micro Dimming to High and Dynamic Contrast to Off – but the C715K certainly favours bright HDR scenes. 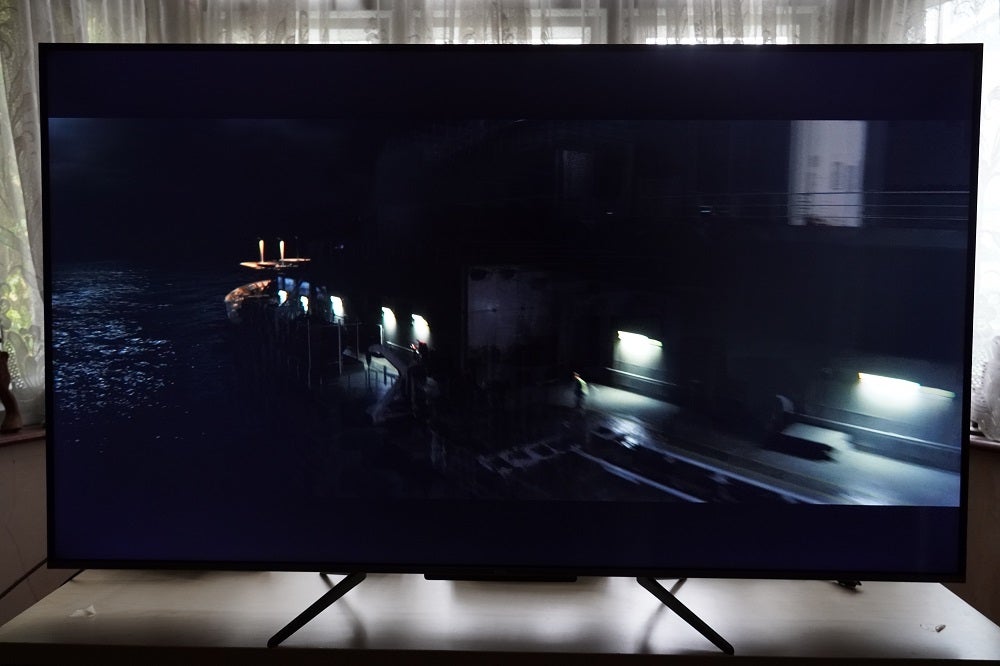 Screen uniformity isn’t the strongest either, with clouding in the corners of Bad Times at the El Royale (4K HDR10+) via a 4K Blu-ray player. It’s less of a problem during the day, but becomes fairly evident when light levels in a room start to drop. Viewing angles are better than most at this price – although, inevitably, colours lose their punchiness and brightness the wider you are. 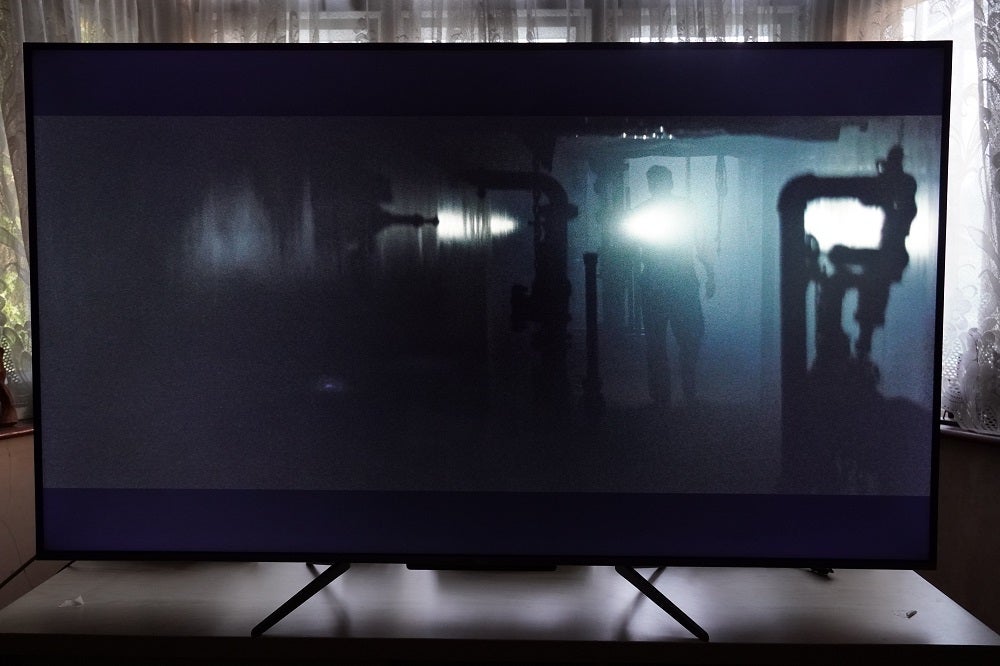 The TCL C715 supports Dolby Atmos, but it isn’t the over your head surround sound kind. Still, with Atmos/5.1 content (The Amazing Spider-Man, Passengers, Skyfall), there’s a sense of height as Spider-Man swings through New York. And, as Bond sets after assassins at the beginning of Skyfall, the sound is convincingly expansive, clear and detailed, offering some decent welly as things get hectic.

Movie mode is best for films, and for daytime TV it’s a choice of Dynamic or Standard. Vocals do lack some warmth, but there’s decent dynamism in Cap’s fight with Batroc in The Winter Soldier, with the effects and music combining well. Bass levels are more prominent than similarly priced TVs, but could use more beefiness. You’d want to pair the 55C715K with a soundbar, but I’d say there’s no rush to get one.

Dual-stand configuration makes it accessible for different areas, and its minimalist design and slim aesthetic are neat.

The C71 doesn’t go bright enough to give HDR a true sense of pop.

The out-of-box settings needs tweaking, and if you’re not interested or au fait with this side of TV set-up, you may not like the image the TCL initially offers.

Black levels can be overemphasised, plus there are some bright splotches in the corners that become noticeable in darker viewing environments.